What is Space-Based ADS-B? 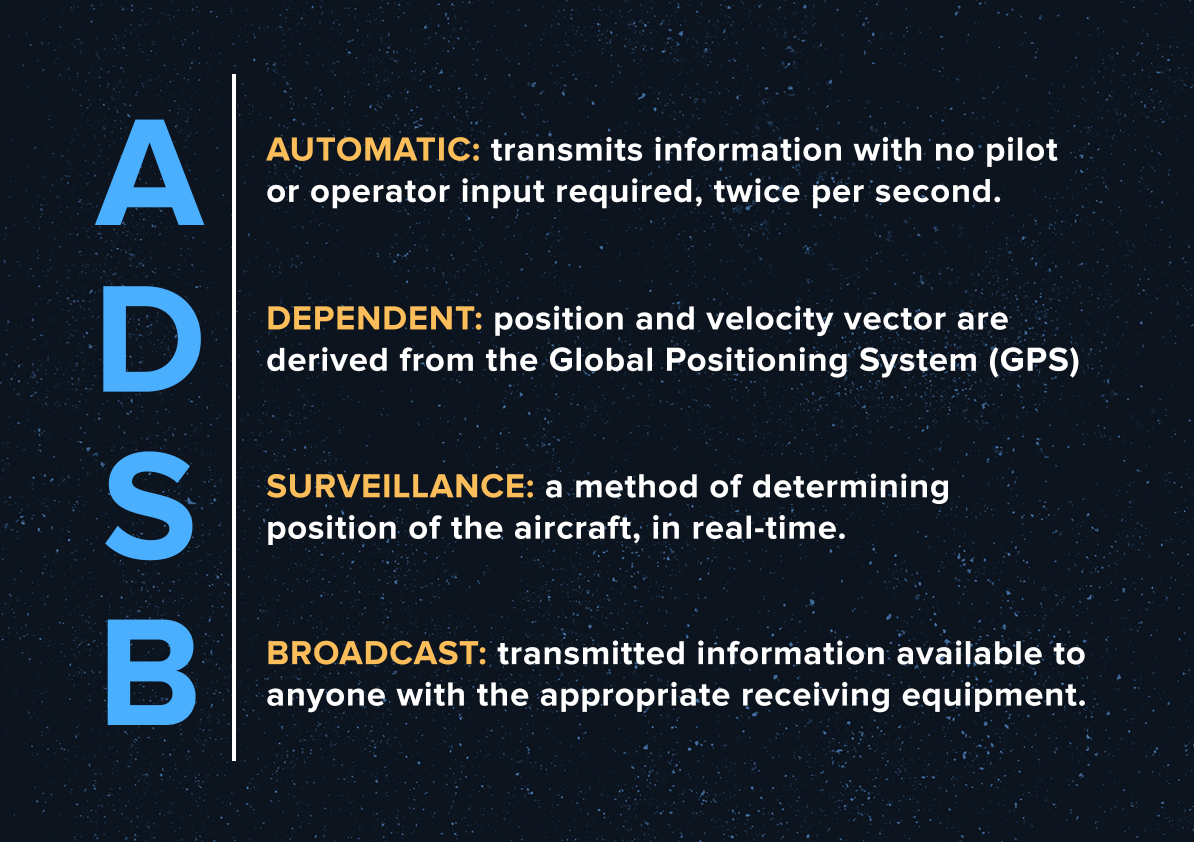 Automatic Dependent Surveillance-Broadcast (ADS-B) is an air traffic surveillance technology that relies on aircraft broadcasting their identity, a precise GPS position and other information derived from on-board systems.

ADS-B is automatic because no work is required from the pilot or Air Traffic Controller (ATC). It is also dependent because it relies on on-board avionics to provide real-time position information to other parties. The data is broadcast every half a second from the aircraft and can be received without a contract.

HOW DOES SPACE-BASED ADS-B WORK?

Since ADS-B is automatic, compliant aircraft will automatically send ADS-B position data (messages), which will be received by the Aireon Hosted Payloads (AHPs) in space. Once received, the AHP will send the data via satellite-tosatellite communication and then down to the Aireon Teleport Network (TPN). From there, the message is sent to the Aireon Hosted Payload Operations Center where it is then transferred to Aireon Processing and Distribution system (APD). Once processed at APD, the message is delivered to its final destination, known as an SDP or Service Delivery Point, which is usually an ANSP that has subscribed to the Aireon service.

Aireon’s space-based global air traffic surveillance system is just ADS-B on a satellite. Sounds simple, and it is.

Instead of utilising traditional radio receiver towers on the ground, which have coverage limitations like oceans, remote areas and inhospitable terrains, Aireon has redesigned them into flexible and highly effective space-grade receivers on Iridium’s second generation satellite constellation, Iridium NEXT.

This allows for global, real-time air traffic surveillance using the same ADS-B signal that aircraft already transmit, but without the limitations groundbased receivers have.

WHAT AIRCRAFT CAN USE THE AIREON SYSTEM?

DO AIRCRAFT NEED ADDITIONAL AVIONICS OR EQUIPAGE FOR THE AIREON SYSTEM TO WORK?

No. International mandates already require the vast majority of aircraft to transmit their location using ADS-B. ADS-B is the backbone of the United States’ Next Generation Air Transport System (NextGen), with approximately 650 ground station transceivers deployed throughout the United States to provide near-nationwide ADS-B coverage. By 2020, the FAA has mandated ADS-B equipment for all aircraft flying above 10,000 feet, within a 30-nm radius of Class B airports at any
altitude or within Class C airspace.

BEFORE AIREON, HOW MUCH OF THE GLOBE WAS COVERED BY SURVEILLANCE SYSTEMS?

Before Aireon, 70 per cent of the world had no access to ATS surveillance information. Remote, oceanic, polar regions, mountainous regions, jungles and deserts had little to no air traffic surveillance. This was not just a tremendous inefficiency, but had safety, financial and environmental consequences.

Instead of utilizing traditional radio receiver towers on the ground, which have coverage limitations, like oceans, remote areas and inhospitable terrains, Aireon has redesigned them into flexible and highly effective space-grade receivers on Iridium’s second generation satellite constellation, Iridium NEXT. This allows for global, real-time air traffic surveillance
using the same ADS-B signal that aircraft already transmit, but without the limitations ground-based receivers have.

WHAT IS IRIDIUM NEXT?

Iridium NEXT is hosting the Aireon system. It is the only satellite constellation with the capability and reach to enable global air traffic surveillance. This is all due to its orbital configuration. Iridium NEXT’s low-latency, 66 cross-linked Low Earth Orbit (LEO) satellites make it uniquely suited to meet the technical demands of global air traffic surveillance and tracking. The LEO satellites will orbit approximately 485 miles above the earth and each satellite will be linked to four others, creating a dynamic network to ensure continuous availability, everywhere on the planet.
The configuration provides complete global coverage, including oceanic and polar regions, without the need for ground stations. The LEO altitude allows the aircraft signals to be received in space without any additional equipment or changes to the existing aircraft avionics. The intersatellite communications links will enable real-time delivery of information to ATC to support aircraft separation services. No other system, existing or planned, will enable such an opportunity for aviation stakeholders.

WHAT IS AIREON ALERT?

Aireon ALERT is a free service that is filling a critical need, ensuring ANSPs, aircraft operators, regulators and search and rescue organizations have the most accurate aircraft position data available when responding to an incident in remote or oceanic airspace. Aireon ALERT uses global space-based ADS-B data provided by Aireon, and is operated by the IAA. Aireon ALERT will go live on April 30, 2019.
The service is only available to commercial aircraft operators, ANSPs, regulators and search and rescue organizations who may at some point need to know the last known position of an aircraft in an uncertainty phase, alert phase or distress phase. The service is not designed for private pilots and the General Aviation (GA) community, who are reminded that they should escalate all requests for uncertainty, alert or distress actions with the appropriate ANSP and mandatory State
authority in accordance with current procedures. Use of the Aireon ALERT service by persons who want to know the last position of an aircraft, but are not directly related to or responsible for the aircraft in focus, can compromise the timely delivery of the service. 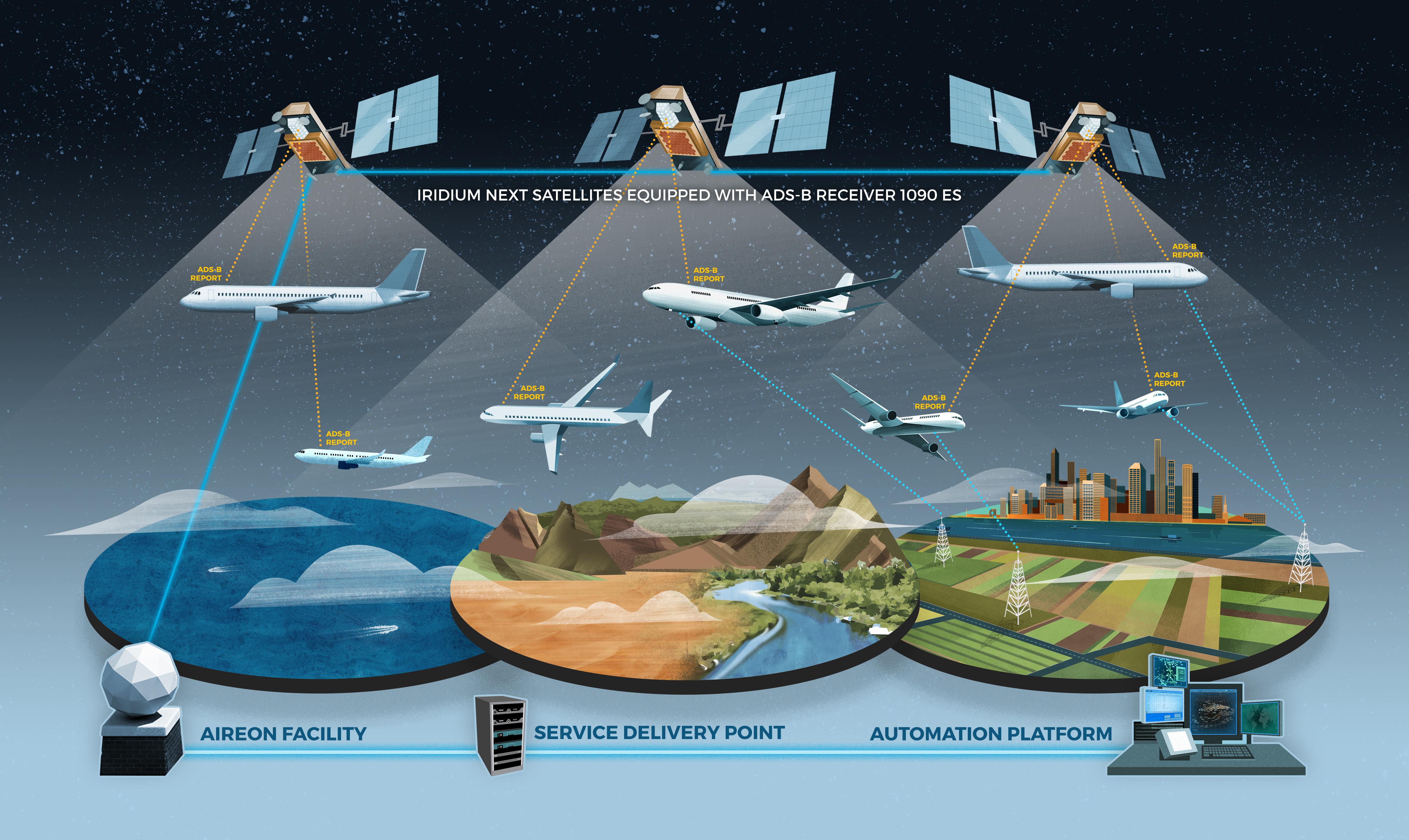