An-22 UR-09307 on final approach to Kuwait International Airport with Fuerzas Aeromóviles del Ejército de Tierra Cougar HT.27-12 on board.
Babak Taghvaee 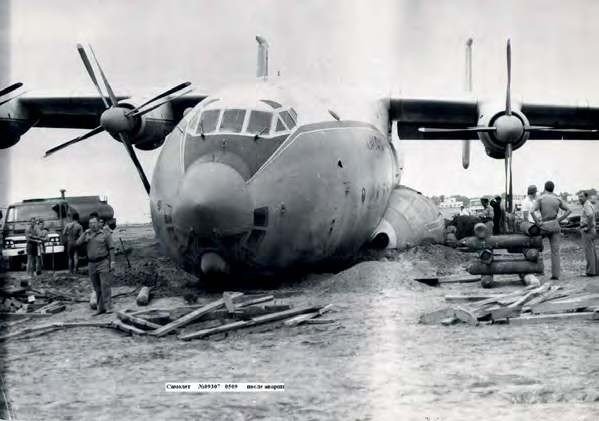 The military life of An-22 CCCP-09307 came to a temporary end at Aden in the Yemen on December 13, 1988, after its landing gears were retracted too early and the aircraft skidded on the ground.
Alexey Dimitrov

THE WORLD’S sole civilianregistered Antonov An-22A, UR-09307 arrived at Torrejón Air Base, Madrid on October 19, 2018, to carry a precious cargo to Kuwait.

Registered CCCP 09307, c/n 043481244, was the eighth An- 22 to be built. It was handed over to the 8th Voyenno-Transportnoy Aviatsii Polk/VTAP (Military Transport Aviation Regiment) at Seshcha, Bryansk Oblast but in July 1975 relocated to Tver’ Migalovo, Tver Oblast where it has been based ever since. The Tver-based unit has been the main operator of Russia’s An-22s since 1976, with three squadrons each with six or seven An-22s at the height of the type’s career.

Before the collapse of the Soviet Union, CCCP 09307 was one of a few An-22s used for commercial flights worldwide and it was involved in disaster relief operations after the Chernobyl disaster in April 1986. The aircraft was damaged during take-off from Aden, capital of People’s Democratic Republic of Yemen on December 13, 1988 after its undercarriage was retracted too early and the aircraft skidded along the ground. The Antonov was carrying a full fuel load as well as a heavy MiG- 25 as cargo and was over maximum takeoff weight.

A team from the Antonov Design Bureau took a year to repair the aircraft in Aden. Panels and structural parts taken from a structural test airframe identified as ’40 Red’ were used in the repair. That aircraft had been used for fuselage fatigue trials by Antonov between October 1969 and 1981 and after that had been stored at Gostomel.

Following the repair, CCCP 09307 was flown to Gostomel airport on December 12, 1989 and had been converted to a civilian cargo aircraft by Antonov by 1992. Its Kupol-22 pilot-navigation system was removed and replaced with the Groza-40 weather radar from a Yak-40 passenger aircraft. It was handed over to Antonov Airlines, the aeronautical division of Antonov Design Bureau, to be used for carrying heavy and large cargos for civil and military customers across the world. It was registered in Ukraine as UR- 09307 from June 1994.

In February 1995 it was damaged again in a hard landing in Khartoum, Sudan. A quick repair was effected by using a main wheel strut of CCCP 09303, an An-22A prototype stored at Gostomel. After the repair work, UR-09307 returned to service in October 1996 but made a wheelsup landing at Recife, Brazil on January 4, 1999. It was repaired again within a few weeks. 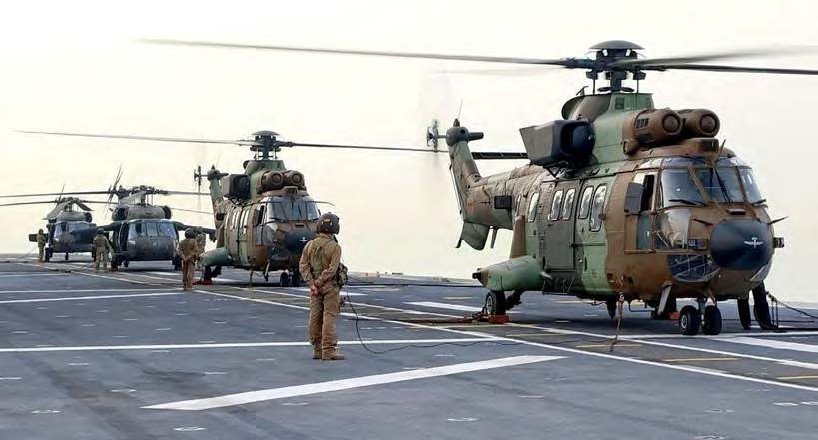 US Army UH-60 Black Hawk helicopters assigned to the 1st Battalion, 244th Aviation Regiment (Assault), 449th Combat Aviation Brigade on board LHD Juan Carlos I (L61), in the Persian Gulf on May 23, 2018. Their mission was to escort the Spanish Cougar helicopters assigned to Task Force Toro, to Camp Buehring, Kuwait as a preliminary location before flying to Camp Taji, Iraq in support of Operation Inherent Resolve.
Captain Briana McFarland/449th Combat Aviation Brigade, US Army

UR-09307 remained in service until 2010 when its 35-year service life was achieved. It had logged only 6,500 flight hours out of 8,000 hours permitted and 2,500 landings and takeoffs of the 3,000 cycles allowed. Following an extensive overhaul, it returned to the air six years later. Ground tests in January were followed on February 12, 2016 by its first post-overhaul functional check flight. Test flights continued until May 30, 2016, a new certificate of airworthiness was issued on June 12, 2016 and it re-entered service on June 30, 2016. It has been used by Antonov Airlines for commercial flights ever since.

Since January 2015, Spain’s Ejército de Tierra (Army) has had an advisory force of 300 soldiers in Iraq. They are tasked with training Iraqi Army and Kurdish Peshmerga security forces as part of Operation Inherent Resolve. Spain’s role in Iraq grew in 2018 and in April 2018 three CH-47D Chinooks of BHELTRA V (5th Transport Helicopter Battalion) based at Colmenar Viejo and two AS532UL Cougars of BHELMA IV (4th Manoeuvre Helicopter Battalion) from Seville were deployed to Iraq after a month of preparation at home.

BHELTRA V’s Chinooks were slated to carry out cargo, troop transport, airdrop and medevac missions while the Cougars were to be dedicated to combat search and rescue, medevac and troop transport in support of operations by Combined Joint Task Force – Operation Inherent Resolve (CJTF-OIR).

Three CH-47Ds, ET-402, ET-406 and ET-408, and two AS532ULs, ET-662 and ET-663, flew to Rota Naval Air Station where they landed aboard the Spanish Navy’s LHD Juan Carlos I (L61), a multi-purpose amphibious assault ship-aircraft carrier. From there, they sailed for the Persian Gulf on May 1, reaching their destination, Kuwait Naval Base 20 days later.

The six-month deployment of Task Force Toro ended in November 2018 but preparations for the Spanish Army’s next deployment were already underway. BELTHRA V’s and BHELMA IV’s helicopters will return to Spain aboard Antonov An-124-100 transports operated by Antonov Airlines. But as previously explained, their replacements are already on their way with the dispatch of BHELMA III’s Cougar HT.27- 12/ET-660 on October 19, 2018. The helicopter arrived in Kuwait City on October 20, 2018 and left Camp Buehring for Camp Taji in Iraq on November 1, 2018.