‘Addis Ababa will be the Dubai of Africa’ 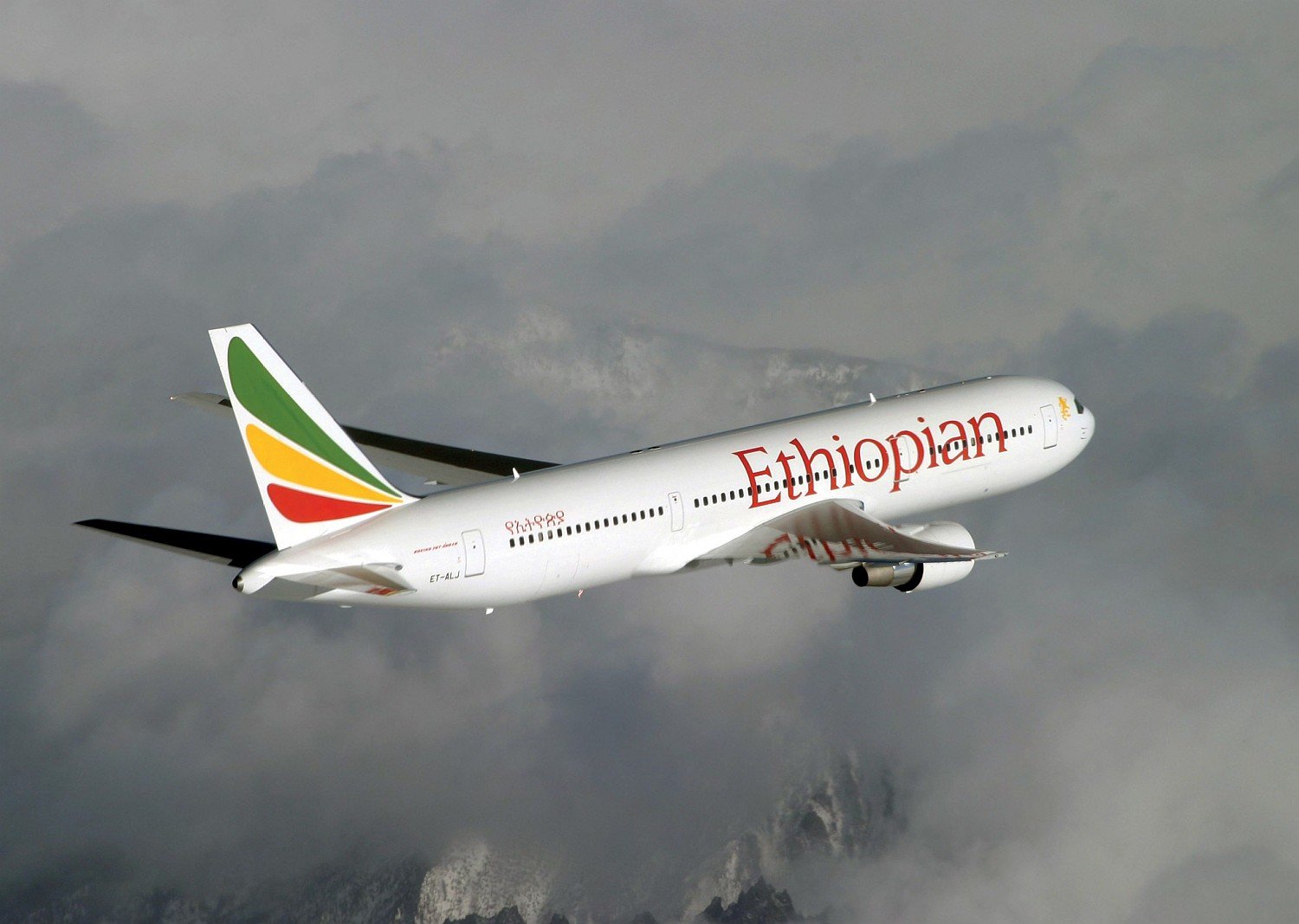 One of the oldest airlines in Africa is now the continent’s biggest. Ethiopian Airlines has surpassed the former market leaders in all areas: passengers carried, fleet size, route network and profit.

All the formerly leading airlines in Africa – South African Airways, EgyptAir, Kenya Airways – are now battling the same problems as almost all the continent’s other carriers. They are often precariously close to bankruptcy, never recover from mismanagement and political meddling and have to cope with the volatile state of their home countries.

Being Africa’s biggest airline is a relative achievement. Tewolde Gebremariam, Chief Executive Officer of Ethiopian Airlines since 2011, interviewed by AIR International in Addis Ababa, said: “Africa is the second biggest continent, but only generates less than 3% of worldwide air traffic. That’s mostly due to the lack of liberalised transport markets.”

Ethiopia is traditionally one of Africa’s strongest and most independent countries, because, Gebremariam said: “we were never colonised”. Ethiopian Airlines started in 1946 and was always a flag-bearer for African aviation, even in the dark days of the 1970s and 1980s when Ethiopia was a communist state plagued by drought and famine, rather than today’s boom country with 10% annual growth.

Ethiopian Airlines has embraced the fact it is not enough to serve destinations in Africa alone (although the 54 destinations it serves are more than any other airline). Thanks to massive help from China, a huge new terminal building is going up at Bole International Airport in Addis Ababa, which will more than double capacity at the airport to 22 million passengers annually when it opens later this year. It was also the Chinese who built huge new maintenance hangars for Ethiopian at Bole and put up the airline’s new hotel nearby, which has more than 700 rooms.

With support from China, Ethiopia and its airline are aspiring to become global players. Setting out the ambitious goals, Gebremariam said: “We are doing this for the whole world. We are developing Addis Ababa as the Dubai of Africa.”

When Gebremariam took office in 2011, while Ethiopian Airlines was still number four in Africa, he crafted what is called Vision 2025 to more than double passenger and fleet numbers, to 18 million customers and 140 aircraft respectively, by 2025.

After only six years, by 2017 Ethiopian had already doubled its capacity and surpassed all African competitors, which have shrunk instead of growing. Gebremariam said: “In Vision 2025, we had set out plans for every year. Until then it was, for example, the goal to serve 90 international destinations. Now we already have over 100 in our network.”

Every year of the plan so far has been profitable. In fact, Ethiopian has constantly been in the black for over a decade, a rarity in Africa. According to Gebremariam: “As we are fully government owned we don’t have any other way to raise money. We can’t go to the stock exchange, for example, so we have to make sure to be profitable.”

One reason for profitability is the very low level of salaries in Ethiopia, which analysts point out and warn about. The more the economy opens, the more wages will have to rise to more international levels, which might be a challenge for the airline.

Ethiopian is used to mastering challenges, however, and tries to absorb them proactively. A good example is the creation of sufficient capacity for staff training.

Gebremariam said: “It’s a challenge in Africa, with all the professionals leaving the continent. We have invested over $100 million over the last five years in our Aviation Academy, among other things, which trains up to 4,000 students every year. This enables us to grow as much as we can without a bottleneck of manpower shortage. Without the academy, we couldn’t sustain our annual growth of 20–25%.”

Taking the lead in Africa

One of the biggest obstacles is the still heavily regulated African air transport market. At the end of January 2018, the African Union started a new attempt in Addis Ababa to launch Open Skies for Africa. Twenty-three states have signed up, among them the ones generating most traffic, including South Africa, Kenya and, of course, Ethiopia.

Still, implementation could take years as every country has to ratify it first. Gebremariam stressed: “As Africa’s biggest airline we have to lead the integration and liberalisation of Africa.” For this, Ethiopian can take advantage of the fact that many African states can no longer afford their own national airlines and turn to Ethiopian Airlines instead for support.

Gebremariam said: “We have created other hubs in western Africa, besides Addis. That has enabled us to get around some of this protectionism. We also have an affiliated airline in Togo, ASKY, that flies now to 22 destinations in western and central Africa. It is able to connect countries within western Africa that were never connected before.”

For example, previously anyone who wanted to go from Ivory Coast to Benin, from Ghana to Nigeria or from Togo itself to Kinshasa in Congo before ASKY took over often had to fly via Europe just to reach a neighbouring country.

Ethiopian also operates flights from Addis Ababa via Lomé in Togo to New York, with full traffic rights to connect western Africa. Currently, Ethiopian is establishing a presence through co-operations with or partial ownership in airlines of nations as diverse as Malawi, Zambia, Mozambique, Democratic Republic of Congo, Equatorial Guinea, Chad and Djibouti and even more. 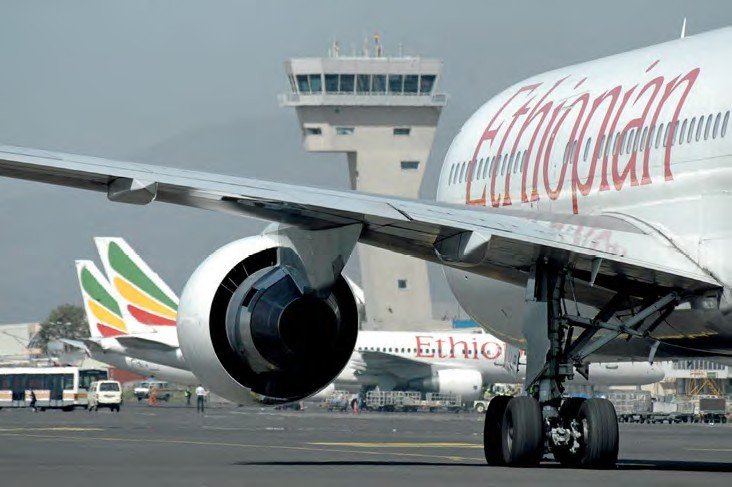 Ethiopian’s hub is Bole International Airport in Addis Ababa, where a new terminal that will double capacity is due to open later this year. 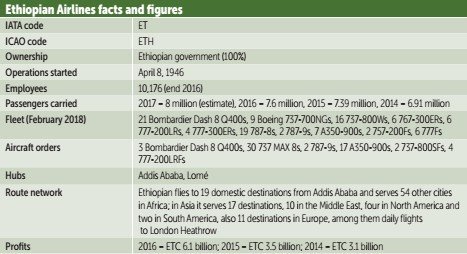 Gebremariam said: “And that is by design, because we have the leadership role in Africa and we are mature. So smart countries are realising that there is expertise of a global standard, technical knowledge and technology here that they can use, and that’s what happening.”

More and more routes and markets outside the home continent are starting to play a bigger role in Ethiopian’s network. Dublin is a good example. There, Ethiopian has established a kind of European bridgehead, initially out of necessity for transatlantic fuel stops. Since June 2015, an Ethiopian Boeing 787 flies four times weekly return flights from Addis Ababa via the Irish capital to Los Angeles, with full traffic rights.

By the end of 2017, Ethiopian gained an additional one million passengers to and from Dublin in this way. So far, westbound flights from Addis Ababa to Washington Dulles and Toronto also stop in Dublin, just for fuel.

Gebremariam said: “Now we have found means to fly non-stop with both the 777 and 787 between Addis and Washington, at least during some months. This saves customers about two hours of travel time and imposes only a small weight penalty on us.”

An important part of Vision 2025 is for the airline to establish an axis of traffic from South America via Africa to Asia. Since March 2017, Ethiopian has served Buenos Aires; the first destination in Latin America was Sao Paulo. Gebremariam said: “From Buenos Aires, the market for us is clearly Asia. Our five weekly flights to São Paulo are full. We serve mostly Tel Aviv, Beirut [and] Japan, Korea and China from there.”

Due to the strong economic ties with Ethiopia, a special focus is on China, where Ethiopian already serves Beijing, Shanghai, Hong Kong, Guangzhou and, the latest addition, Chengdu. New destinations this year are Chicago, Geneva and Lisbon. Another European hub high on the priority list is Munich, hub of Star Alliance partner Lufthansa. Frankfurt is already one of Ethiopian’s main European gateways, having been served continuously for 60 years. Gebremariam said: “We only want to go to Munich in cooperation with Lufthansa, but currently we are working to form a joint venture first on the Frankfurt to Addis route.”

Ethiopian has always been at the forefront of fleet modernisation. Gebremariam recalled: “When I started here in 1984, we were a small airline with just six Boeing 707s and the first 767 came at that time, while currently we have 97 aircraft.”

With an average fleet age of less than six years, the airline also ranks in the top tier globally, and modernisation continues. In the AIR International interview, Gebremariam said: “We will order ten to 20 Boeing 777Xs [by] the end of 2018, a mix of 777-8s and 777-9s. We delayed the 777X order because Airbus promised us the A350-1000, but then we saw the figures and it was clear the A350-1000 will not perform well out of Addis.”

This means all 24 A350s ordered will be taken as A350-900s, with seven aircraft having been delivered by February. Contrary to assumptions, however, Ethiopian will hold on to its fleet of six Boeing 767-300ERs with an average age of 16 years: “They are a small, but important part of our fleet, three have just been retrofitted with new lie-flat seats, the 767s will fly another five to six years.” 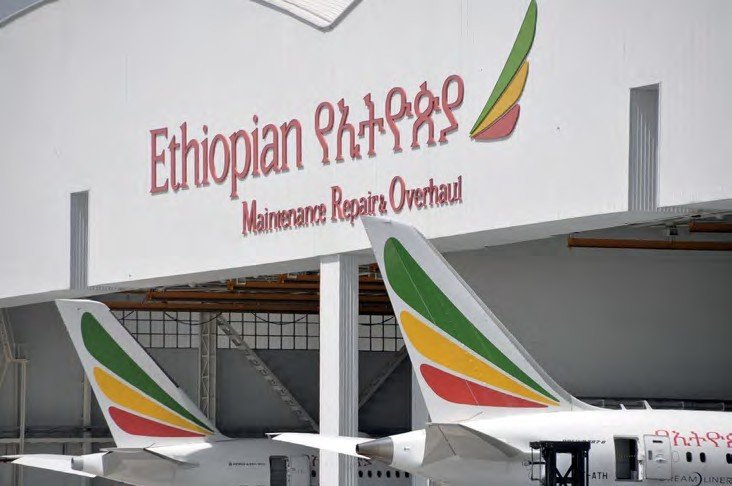 Chinese investment has resulted in new maintenance hangars for Ethiopian at Bole.

“We are developing Addis Ababa as the Dubai of Africa.” Tewolde Gebremariam, Chief Executive Officer of Ethiopian Airlines

Gebremariam went on to speak about his favourite project: “We want to establish an aerospace industry in Ethiopia, to assemble [not only] labour-intensive parts such as seats and seat covers, but also insulation materials and wire harnesses. We cooperate with Airbus and Boeing and it’s supposed to get going this year.”

One thing is certainly not lacking in Ethiopia: a hands-on approach and ideas. One of the 19 Boeing 787-8s in service with Ethiopian; the carrier also operates two 787-9s with another two due for delivery.
All images by Andreas Spaeth unless noted