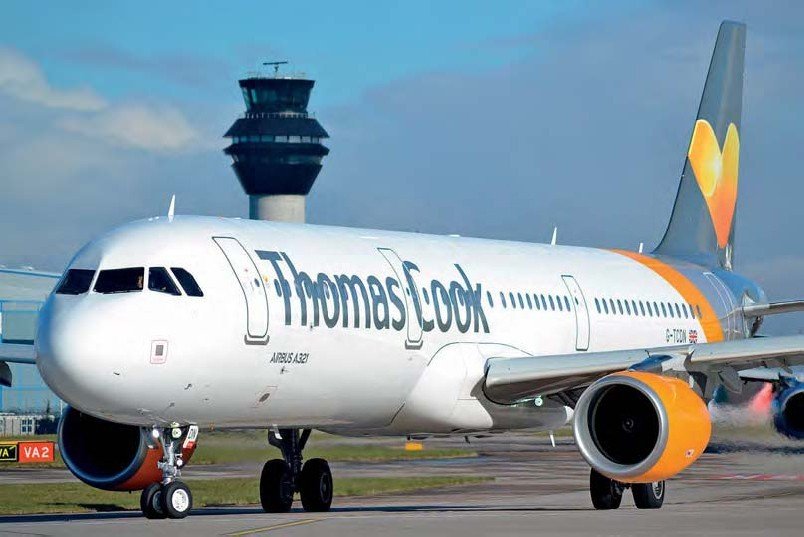 Thomas Cook Airlines’ main base was Manchester, where one of its A320 Family aircraft, A321-211 G-TCDN (msn 7048) is pictured taxiing earlier this year. Ian Simpson

Operation Matterhorn ended in early October after more than 140,000 travellers were returned to the UK in a two-week period following the tour operator’s collapse. The CAA said the effort had involved 50 airlines flying 746 flights from 55 airports, making it the largest-ever peacetime repatriation to the UK.

Thomas Cook Group and its associated UK companies entered liquidation in September after discussions between the company and potential investors on recapitalisation and restructuring fell through. The collapse led to the grounding of the UK airline arm of the business, Thomas Cook Airlines, which operated an all-Airbus fleet of 29 A320 Family jets and seven A330s. The other Thomas Cook-affiliated carriers, Condor in Germany and operations in Denmark and Spain, continue to operate.

Three other airlines have recently gone out of business. The French carriers XL Airways and Aigle Azur, which operated A320s and A330s from Paris (XL primarily to long-haul destinations in the Caribbean and United States, and Aigle Azur mainly to points in Europe, Brazil and China), both ceased operations in late September. Their collapses were followed in early October by Slovenian national carrier Adria Airways filing for receivership. Adria operated eight Bombardier CRJ900s. All the collapses add to an extensive list of airline failures in Europe in recent years, which also includes Germania, WOW Air and Flybmi this year alone. Monarch Airlines and Air Berlin were among earlier casualties.

There are specific reasons behind the demise of each carrier, but common factors such as overcapacity, intense competition and rising fuel prices are fundamentals.

Analysts say the collapses will ease pressure on other operators by removing excess capacity, opening slots for other carriers. Mark Broadbent