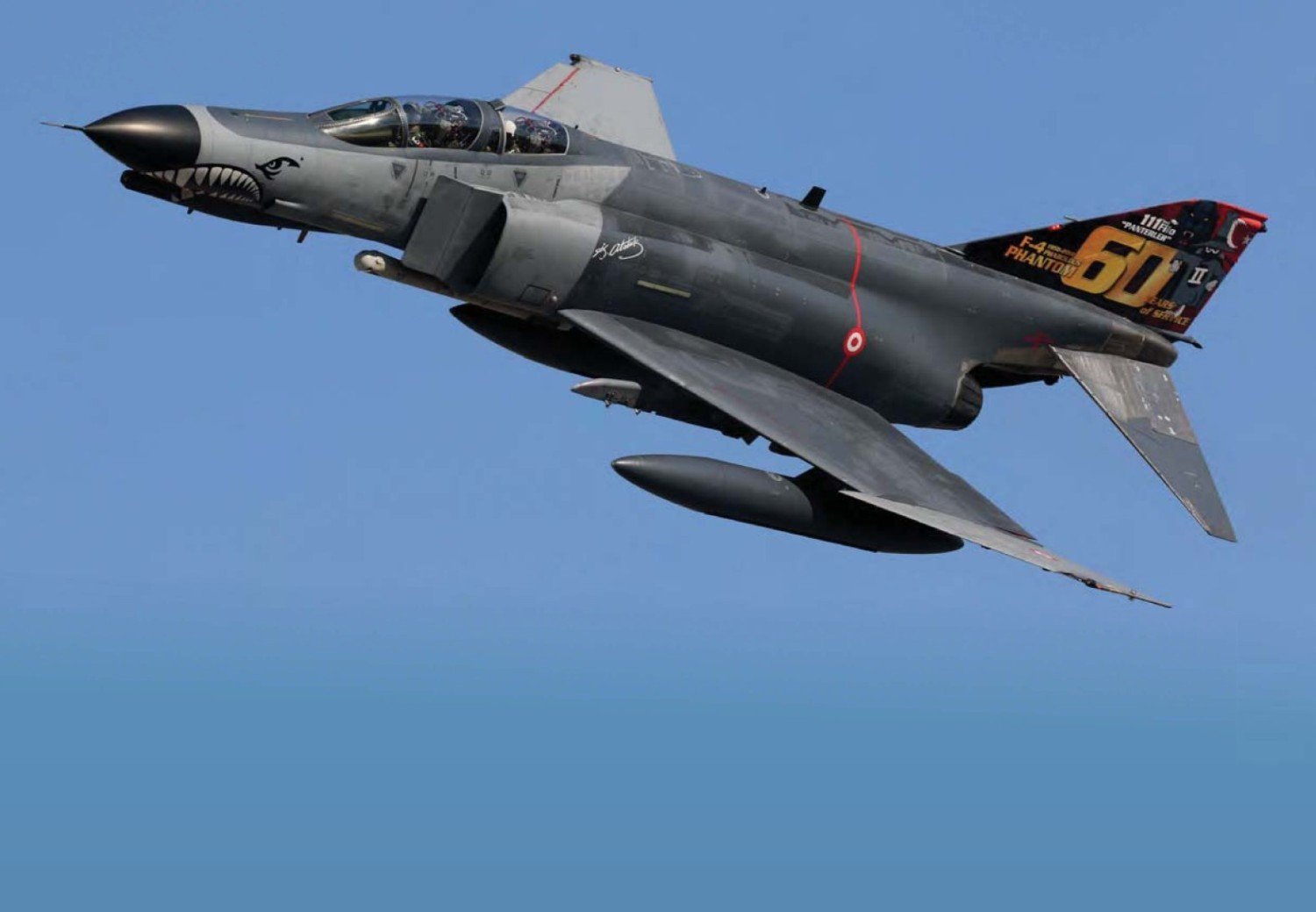 AFTER AN absence of three years, Exercise Anatolian Eagle (AE) returned to Konya Air Base in central Turkey from June 17-28. The failed July 2016 coup and subsequent removal of many personnel from the Türk Hava Kuvvetleri (Turkish Air Force), meant it was not in a good enough shape until now to stage such an event.

Political alliances have changed since then and unlike in 2016, there was no Saudi Arabian involvement this year. Qatar did take part however and Turkey’s closest ally in the Middle East, sent a C-17A Globemaster III and C-130J Hercules. Pakistan, another of Turkey’s allies deployed five JF-17 Thunders which were making the type’s debut in a NATO exercise. Jordan made its seventh appearance with two F-16As and a F-16B while Italy was represented by three AMX. Despite the political fall-out between the United States and Turkey, stemming from the latter’s deal with Russia to procure the S-400 Triumf surface-to-air missile (SA-21 Growler), the United States Air Forces in Europe sent six F-15E Strike Eagles from its 48th Fighter Wing’s 494th Fighter Squadron based at RAF Lakenheath, England. NATO forward deployed an E-3A AWACS to Konya.

The hosts provided F-4E Phantoms II, F-16Cs and F-16Ds, AS532 Cougars, C-130E Hercules, E-7T Peace Eagles, CN235s and an electronic intelligence-configured Transall C-160D; probably the most interesting aircraft at the event. Türk Hava Kuvvetleri KC-135s flying out of Adana-Incirlik are believed to have provided the aerial refuelling requirements.

Not too surprisingly the number of Turkish F-16s in evidence was fewer compared to the last AE in 2016, not just because of lower manning levels following the purges, but an increased operational tempo; F-16s are being used heavily in the southeast of the country against the Kurdish PKK.

Türk Hava Kuvvetleri F-16 units flying as Blue Air comprised aircraft wearing the markings of 113 Filo at Eskişehir, 152 Filo at Incirlik, 161 Filo and 162 Filo based at Bandirma, and a sole 182 Filo example from Diyarbakir. However, it was unclear if some of these jets, particularly the latter were loaned to other squadrons.

Each day started with the departure of the NATO E-3A to oversee the unfolding fight; a based 131 Filo E-7T also participated, returning after the day’s proceedings had finished. Eight F-16Cs of Konya resident 132 Filo acted as Red Air aggressors, operating from the west side of the air base, while the rest of the fighters working as Blue Air were based on the east side.

Both mornings AIR International was present at Konya, four F-15E Strike Eagles were the first fighters to take off.When the fight started, they would push first into ‘enemy’ territory, backed up by the Türk Hava Kuvvetleri and Royal Jordanian Air Force F-16s. It would have been interesting to know how the 132 Filo F-16s, which specialize in the aggressor role, faired with the F-15Es but no information was made available. All three 51° Stormo AMX fitted with Rafael Litening targeting pods were operating in the close air support role, while it’s unclear what role the Pakistan Air Force JF-17 Thunders played; all were fitted with three large fuel tanks that would have made air combat very difficult. Nor were the Thunders fitted with air combat manoeuvring instrumentation (ACMI) pods like most of the other aircraft either, probably because they are not compatible for carrying the west’s ACMI systems by form and fit. 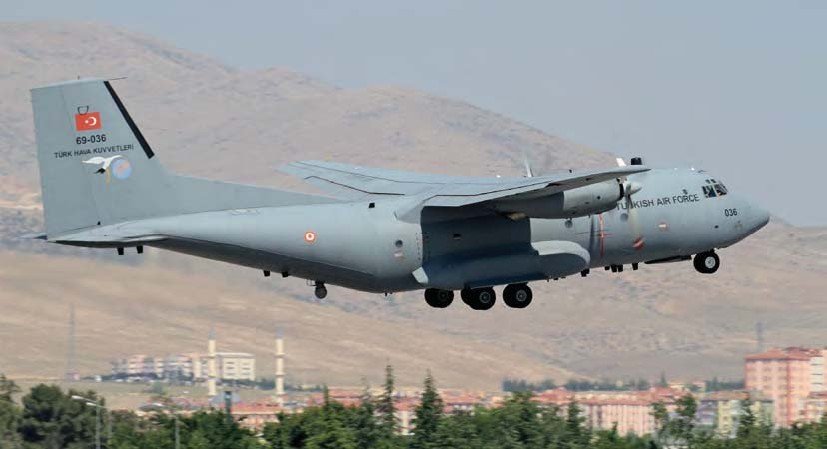 One of the most interesting aircraft seen at Konya during Anatolian Eagle was this electronic intelligence-configured Transall C-160 operated by 221 Filo. This elderly transport aircraft is one of two upgraded by Aselsan in 2016 fitted with a communications intelligence system and an ASELFLIR-3000T forward looking infrared turret.

The JF-17 Thunder made its first appearance at Anatolian Eagle, a NATO exercise, with a contingent at Konya from Samungli-based 28 Squadron ‘Phoenix’, the latest unit to equip with the type which stood-up on February 28, 2018. Note this Block 1 aircraft is fitted with three large fuel tanks, normally only used for ferry flights.

Among the mission sets the Blue Air force would have been practising were dynamic targeting – which is not planned for but comes up when a threat situation is unfolding - time sensitive targeting and close air support.

Star participants for many observers were six 111 Filo F-4Es, with one of the charismatic jets painted in special markings to celebrate 60 years of Türk Hava Kuvvetleri operations. A senior officer said the Phantoms are expected to continue in service for another ten years!

Konya Air Base, also known as the 3rd Main Jet Base, has been hosting AE since 2001 and has built up a lot of infrastructure needed to host such a large exercise. Apparent from the construction work underway on the east side of the runway is that more ramp space is being built.

Coupled with a huge nearby weapons range extending over 50,000 square miles (129,500km2) with a top altitude of 50,000ft and stretching out over the Aegean Sea, there is plenty of airspace for the 50 or so aircraft to use. Situated in the vast range complex are a number of surface-to-air missile against which aircrew can practise their electronic warfare skills. They include the SA-6 Gainful, SA-8 Gecko, SA-11A/B Gadfly, ZSU-23- 4 Gundish as well as Skyguard, Sparrow, Hawk and multi-band threat simulators.

Large force exercises are nothing new to Europe. This year Sweden hosted a huge edition of Air Combat Exercise across vast areas of Scandinavian airspace, and Greece organised its annual Iniochos manoeuvres. The latter now includes the Israeli Air Force. Once a close ally of Turkey, Israel participated in many of the earlier Anatolian Eagles, but relations broke down in 2010. All of the European exercises strive to emulate the world-famous Red Flag series hosted at Nellis Air Force Base, Nevada and Eielson Air Force Base, Alaska.

This line up illustrates the international flavour of Anatolian Eagle; Royal Jordanian Air Force F-16s, Aeronautica Militare AMX and Pakistan Air Force JF-17s. All three air forces have been regular attendees since the first edition in 2001.