The Scandinavian carrier is gaining from huge demand in China and Japan and is promoting Helsinki as a timesaving gateway to Europe, writes Andreas Spaeth 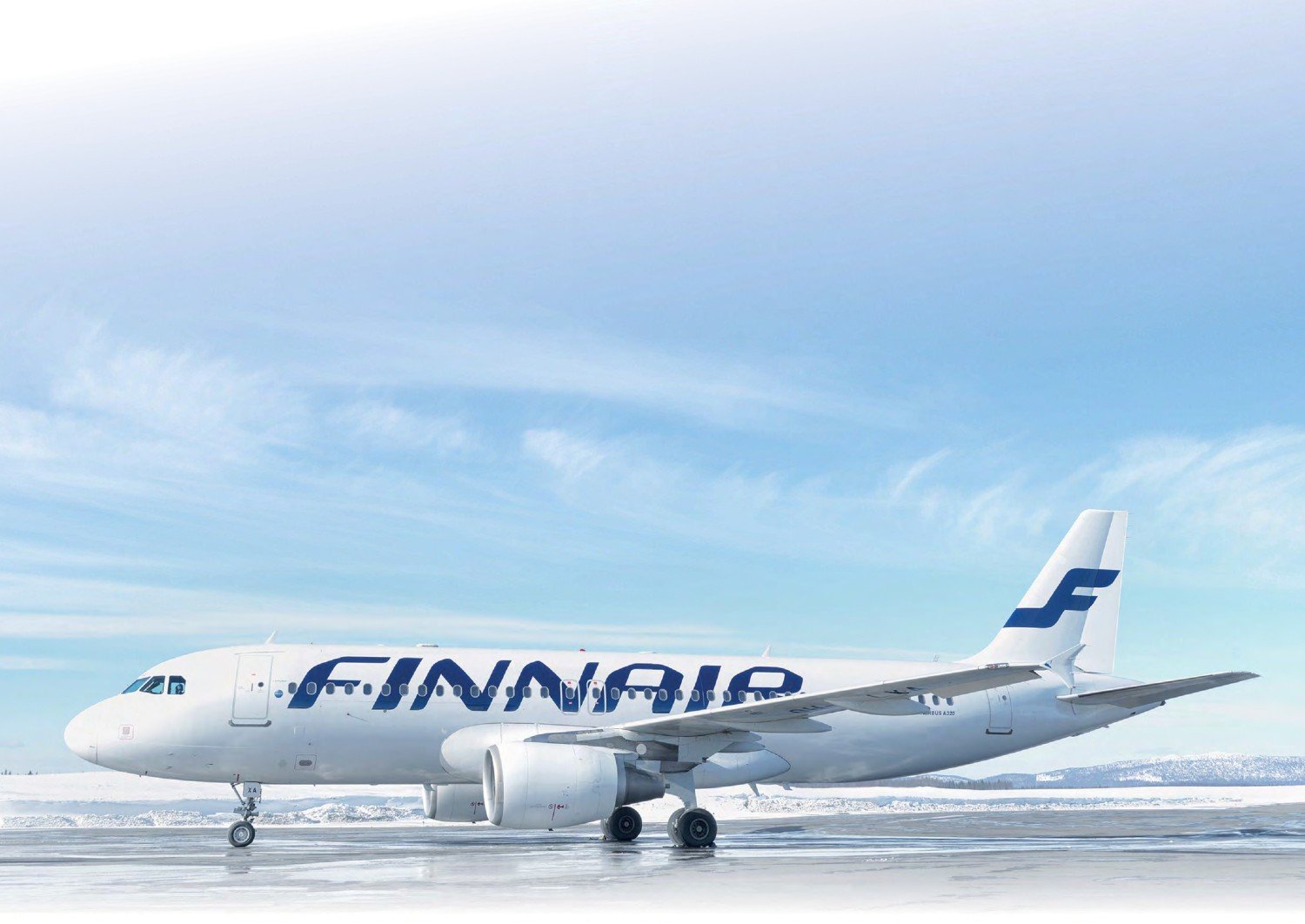 A decision will be made within the next two years on a future narrowbody between the A320neo or Boeing 737 MAX families to replace the current A320 Family aircraft.
All photos Finnair unless stated

From CEO Pekka Vauramo’s Office at the Finnair headquarters, the view goes out over to the airport of Finland’s capital. Helsinki’s Vantaa airport has been in expansion mode for some years, with construction cranes reaching high into the skies. The formerly compact and easy-to-navigate airport of a midsize Scandinavian capital is more and more becoming an important hub for intercontinental traffic between Asia and Europe, thanks mostly to Finnair.

In an interview with AIR International, while looking out on to the big expansion at the carrier’s base, Pekka Vauramo said: “We are currently growing as fast as never before in our history.” This is quite something, given that Finnair is the sixth-oldest airline in the world. Its predecessor was founded in 1923. In the winter schedule of 2017-2018, the capacity increase was 13% system wide, 19% on long haul. According to Vauramo: “Our rapid growth is in line with the airport.”

Distances in the ever-more complex terminal are getting longer and longer. Vauramo said: “The airport is crowded for the time being because it is short of gates, as some are closed due to the expansion going on; but in 2019 or 2020, the new Pier West will open with 15 new gates and subsequently the main terminal extension will begin – but we need to agree on the next growth targets with the airport soon.”

Finnair, still 56% state owned, is a niche success story in northern Europe, and it thrives due to its booming Asia business. In 2017, Finnair very narrowly missed the 12 million passengers mark and still achieved record numbers. This is all the more remarkable as Finland is home to just 5.5 million people. By 2030, the airline aims to carry 20 million passengers, almost four times the country’s population. Even this will be less than Shanghai’s population alone, which stood at 25 million at the last count. However, the Chinese metropolis and six other megacities in the People’s Republic are linked daily to Helsinki. The same is true for four metro areas in Japan.

China and Japan are the two markets into which Finnair puts most of its capacity. Up to 20 destinations, some of them seasonal, are served in Asia, which accounts for 48% of Finnair’s available seat kilometres.

Because of Helsinki’s location in northern Europe, Finnair tries to beat the Persian Gulf carriers by promoting its hub as the most timesaving gateway into Europe from Asia. Elapsedflight times are indeed shorter via Helsinki than via Dubai or other, European hubs. Geography enables Finnair to serve all long-haul destinations (with the exceptions of Delhi and Singapore) within 24 hours return, meaning they can be operated with just one aircraft each.

Finnair enjoys huge demand from Asia, which it tries to satisfy as fully as possible. Sometimes it stumbles, though, such as when it had to cut downflights to Chongqing due to a lack of trained pilots, or deploy A330s wet-leased from Oneworld partner Iberia, triggering customer complaints. Nevertheless, the big goal has been achieved: doubling the 2010 number of available seat kilometres (ASKs) to Asia, which will be reached in 2018, two years earlier than planned.

Finnair would prefer twoflights daily to Shanghai rather than one, but that is impossible for the time being, due to restrictions in the bilaterals between Finland and China, as well as the slot situation at Pudong Airport. Instead, Finnair will this summer start services to Nanjing, which, Vauramo pointed out, “at least lies in the Shanghai region”.

He welcomed the fact that since January a Chinese airline has been landing in Helsinki. Lucky Air, part of the HNA Group, flies twice weekly from Kunming via Chengdu to Finland with an A330: “We would like to see more Chinese carriers here also, in order to get more opportunities ourselves for widening our traffic rights.”

In Japan, Finnair would like to serve Tokyo’s Haneda airport from summer 2018, depending on slot availability, besides Narita where it is already present. Japan Airlinesflies the Narita to Helsinki route, as well, but Finnair takes pride in always being the biggest operator on each of the long-haul sectors it serves. 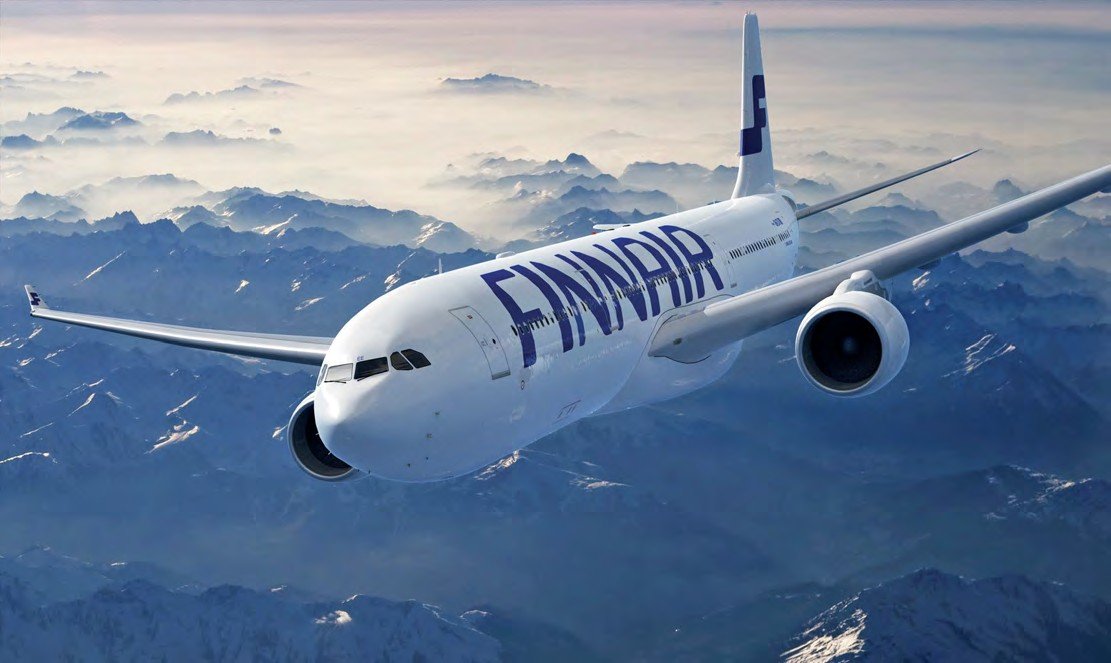 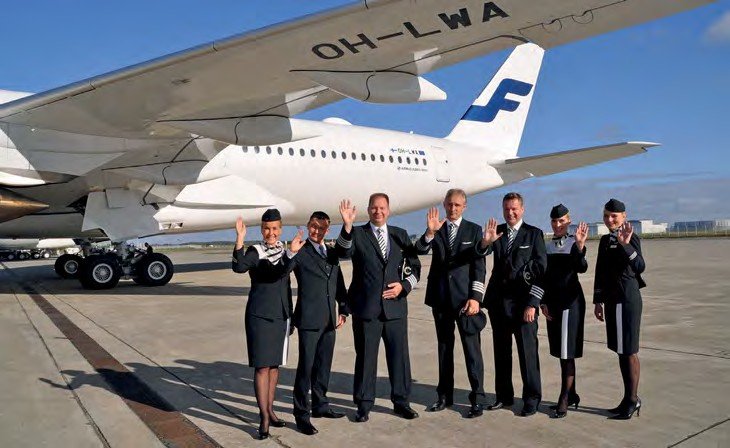 The slot situation at Asian airports even has an impact on Finnair’s fleet planning. While it rules out operating any A380s, mostly due to a lack of cargo capacity, the airline still favours a pure Airbus fleet. Finnair was the first European A350 operator in October 2015; by September 2017, 11 A350-900s had been delivered from Toulouse. Eight more are due to join the fleet by 2023. Vauramo said: “We could convert some of the upcoming deliveries into A350-1000s, depending on slot availability in Asia, but we’d rather stick to a pure A350-900 fleet.”

Finnair has recently increased its long-haul capacity more than planned. In February 2017, the last of the airline’s former seven A340s left the fleet. At the same time, it was planned to get rid of two of eight A330s, once the first A350s were in operation. Instead, all A330s stayed on and will remain until early in the next decade. From 19 A330/A350 aircraft today, the widebody fleet will grow to 22 in 2020 and 26 by 2023.

Vauramo, who hails from the air cargo industry, said: “We are very pleased by the A350 and its performance. The fuel burn is much better. We are flying much more than before, but just burn about 3–4% more. Also the big cargo capacity plays an important role on long haul routes.”

The A350’s big payload capability is also the reason Finnair deploys the aircraft on a morning flight from London Heathrow to Helsinki. It feeds cargo on to the Asian flights leaving Helsinki in the afternoon.

Vauramo said: “Meanwhile, we try to deploy the A330s on shorter long-haul routes.’ This doesn’t always work out, as with the first flights to new seasonal destination Havana, Cuba, in December. As the A350 was new to Cuba, the aviation authorities permitted its use only a month after the new route was started, so the A330 had to fill in: but then, not all about the A350 has been positive. Vauramo complained: “We were very disappointed by some cabin issues. Zodiac had to rebuild part of the cabin furnishings.”

Overall, however, the A350 is still a big success for Finnair: Vauramo proudly said: “Usually customer satisfaction for airlines is in the 25–30% range, but we achieved 52% since the introduction of the A350.”

Finnair has introduced a second cabin version with a smaller business class offering, which gives a total of 336 seats on the A350 compared to 297 in the other configuration.

It is also weighing the introduction of an enhanced business class product. Vauramo said: “We have to look at compartments with sliding doors, such as Delta has introduced on its A350s.”

Finnair is clearly sticking to its premium strategy, which increasing competition from low-cost long-haul carriers such as Norwegian can’t hinder. Vauramo observed: “We have little head-on competition with them [and] are not very exposed to Norwegian. It does affect us, but doesn’t have a big impact.”

Like Norwegian, Finnair runs a very seasonal long-haul business. A third of all destinations are only served at certain periods; San Francisco and Chicago, for example, are only served in summer. Vauramo said: “There are many Scandinavian immigrants living there.” The same aircraft fly winter-weary northerners to warmer climates in Havana, Puerto Plata or Puerto Vallarta. Route seasonality is high in Asian markets, too; Guangzhou, Xian or Fukuoka are all summer only, while in winter it’s Goa, Krabi or Phuket. 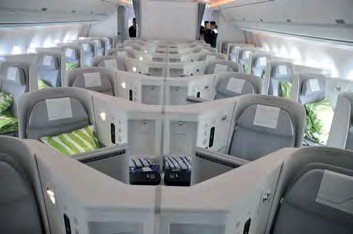 Business class on the Finnair A350; the airline was one of those affected by the problems over the supply of cabin furnishings from Zodiac.
Andreas Spaeth 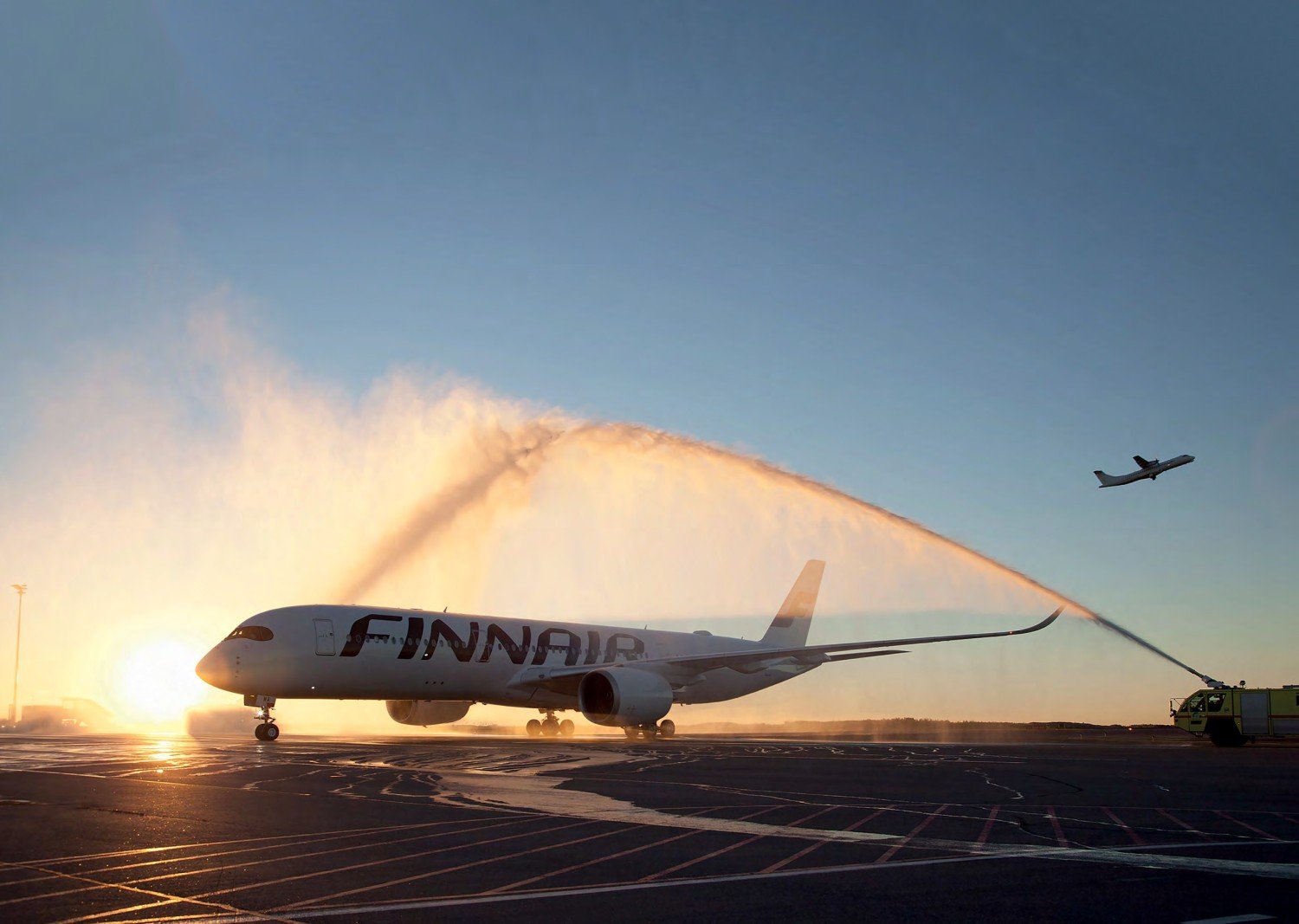 Seven A350-900s have now been delivered to Finnair, with another eight set to join the fleet by 2023. 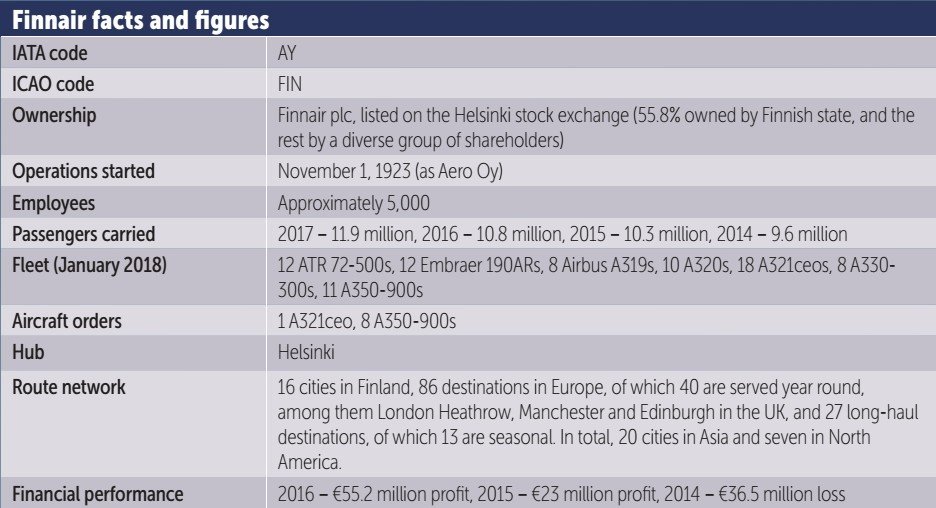 On long-haul routes, the Oneworld alliance is of utmost importance for Finnair as a smaller carrier. Vauramo said: “Our joint ventures [JV] to Japan with Iberia, JAL and British Airways, as well as the transatlantic JV with Iberia, American and BA are hugely significant, bringing us about 20% of our business.”

With the dominant business to Asia, transatlantic routes only account for 7% of Finnair’s capacity. Much more important is Europe, which accounts for 40% of ASKs, especially as feeders to and from the Asia flights. Similar to the 15% growth in capacity on Asia flights, seat offerings in Europe grew by 10%. Year round, Finnair serves about 30 destinations in Europe, which is more than doubled by seasonal routes, mostly in summer. New in 2018 are flights to Stuttgart, Lisbon, Bergen and Tromsø, while Edinburgh and Alanya are now served all year round. Finnair has also increased capacity to Berlin to make up for the lost codeshare flights it used to operate with former Oneworld partner Air Berlin, now grounded.

An important focus for Finnair’s European expansion is new direct flights from Frankfurt, London Gatwick, Paris CDG and Zurich to Lapland in winter, with an overall capacity increase of 20% to northern Finnish destinations such as Ivalo, Rovaniemi and Kittilä. At the same time, Finnair is contemplating how to contain losses on domestic and short-haul routes. For these markets it uses aircraft operated by Nordic Regional Airlines (Norra), flying in full Finnair livery and branding.

Initially, this operation was founded with Flybe as Flybe Nordic, but after losses mounted due to weaknesses in the domestic Finnish market, Flybe quit and Finnair took over. It currently owns 100% of Norra. Vauramo said: “This is temporary. We need a partner within 12 months that’s committed to this region and understands the market, as it is so different compared to what we do.”

Norra operates 12 ATR 72s, flying up to ten legs every day, each between 30 and 60 minutes long, as well as 12 Embraer E190s mostly on shorter European routes. Of course, the idea is to operate on these regional routes with a lower cost structure.

The next important fleet decision for Finnair will be the replacement of almost the whole narrowbody fleet. According to Vauramo: “We are looking at 30-plus aircraft. The decision will be made between the A320neo or Boeing 737 MAX families in the next one to two years. I am glad we don’t have any A320neos on order as of yet, as the engine issues have to be solved first.”

In 2018, one A321ceo with Sharklets will still be delivered following seven others that arrived last year. Vauramo said: “With them we do missions of up to almost six hours like to Dubai or Madeira or our longest European route to Lisbon with a flight time of almost five hours.”

Finnair’s results often sharply went up and down in previous years, and although profit margins are still thin, Pekka Vauramo has stabilised the airline and sees it fit for renewal and expansion: “We are very well prepared for future investments, and we will target to grow faster than our European peers in traffic between Asia and Europe.” AI