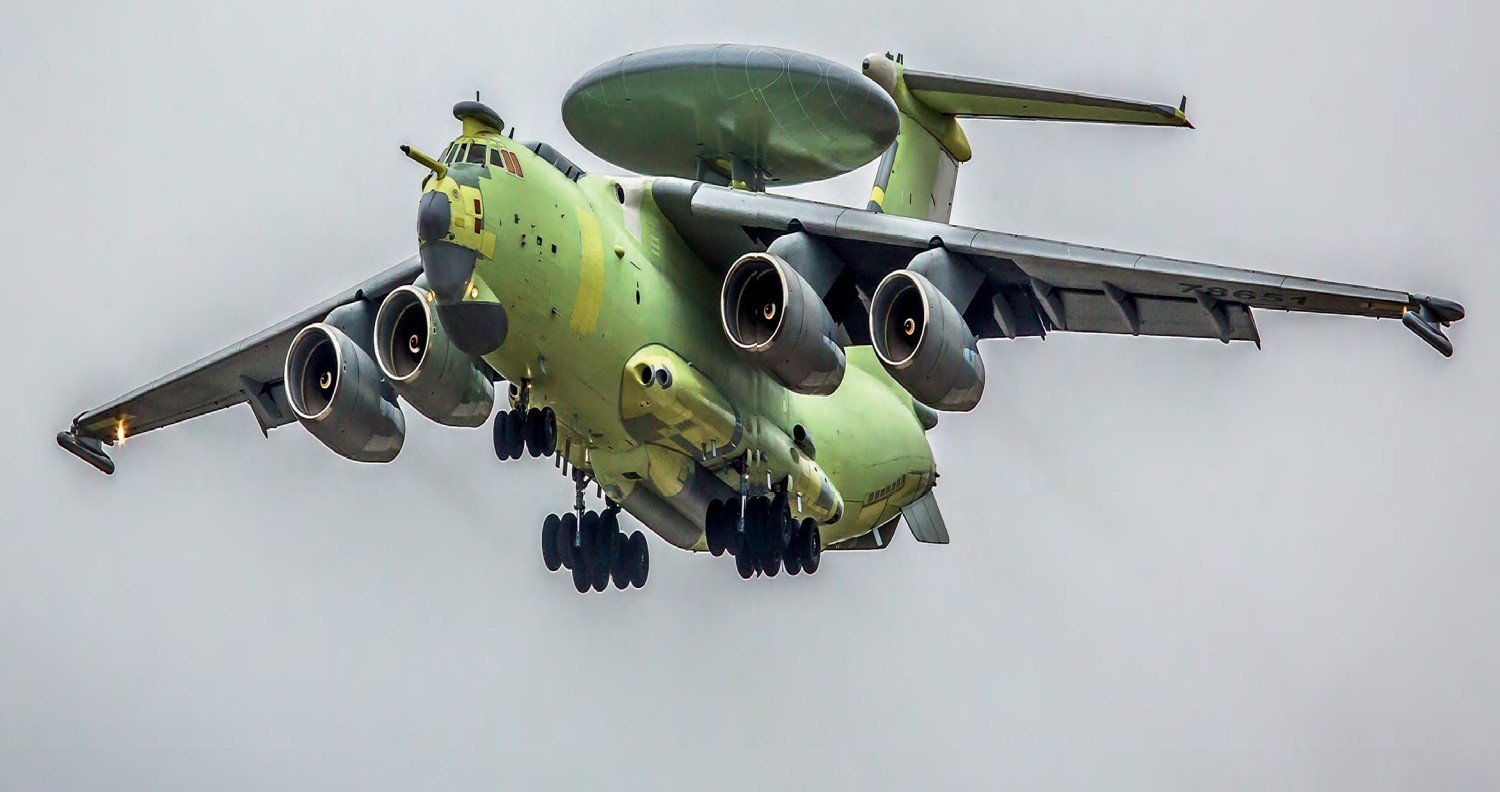 Russia’s TASS news agency reported that the Beriev A-100 Airborne Warning and Control System (AWACS) aircraft performed its maiden flight from the Taganrog Aviation Scientific and Technical Complex on November 18.

According to Russian sources, the first prototype (converted Il- 76MD-90A 01-03, registered 78651 delivered to Beriev at Taganrog on November 21, 2014) is referred to as the A-100LL (Letayushchaya Laboratoriya or flying test bed) and will be used for testing the Premier mission system; it will later be joined by a second development aircraft.

Quoting the Moscow-based Vega Radio Engineering Corporation, designer of the A-100’s Premier mission system, the news agency said the maiden flight tested the aircraft’s aerodynamic handling qualities, as well as initial testing of avionics and mission systems. TASS quoted: “The flight tested the aerodynamic characteristics, the aircraft’s avionics and elements of the radio-technical complex.” The A-100 utilises the Ilyushin Il-76MD-90A (Il-476), powered by Aviadvigatel PS-90-76 engines, as the baseline airframe and will replace the Russian Air Force’s existing Beriev A-50 and A-50U Mainstay AWACS platforms assigned to the 144th Airborne Early Warning Aviation Regiment based at Ivanovo-Severnyy Air Base, 250km (155 miles) north east of Moscow.

The A-100 retains the general configuration of the Beriev A-50 with a rotating radar dome carried on two streamlined struts above the fuselage. The A-100 is equipped with advanced signal and electronic intelligence systems, an ECM suite for self-defence, satellite communication and an S-band (75 to 150mm wavelength) Premier radar with active electronic scanning in elevation and mechanical scanning in azimuth. The Premier radar is reportedly capably of tracking up to 300 targets on the ground and in the air simultaneously and Russian sources report that deliveries of production A-100 aircraft to operational Russian Air Force units are set to begin in 2020. Nigel Pittaway 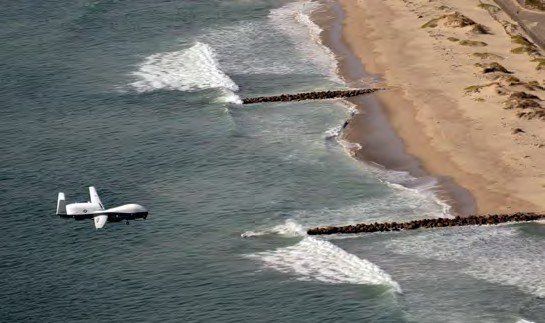 The first operational Northrop Grumman MQ-4C Triton maritime surveillance aircraft was delivered to the Naval Base Ventura County Point Mugu in California on November 9. A second Triton is planned to be delivered before the end of 2017 and both are expected to be forward-deployed to Guam during the course of 2018.

The Triton delivered in November is the first aircraft for the US Navy’s Unmanned Patrol Squadron 19 (VUP-19) ‘Big Red’. The aircraft will initially operate from Point Mugu, which is also home to a maintenance detachment, but will be controlled from VUP-19’s home base at Naval Air Station Jacksonville, Florida.

VUP-19 is the Navy’s only unmanned ISR squadron to date and was stood up at Jacksonville in October 2016.

The unit will develop the tactics, techniques and procedures for fleet support operations prior to the declaration of an early operational capability (EOC) and deployment of the aircraft overseas.

Doug Shaffer, Northrop Grumman’s Vice President for the Triton programme, said: “This aircraft is the beginning of a new era for naval aviation. Triton is a high-altitude, long-endurance, unmanned system that delivers a critical autonomous capability to the Navy, expanding the service’s maritime patrol mission.”

After a period of operations from Point Mugu the two aircraft will be forward-deployed to Guam to support the US Navy’s 7th Fleet operations in the Pacific Ocean. The Navy has previously announced that it will also deploy future Tritons to Naval Air Station Mayport, Florida, Naval Air Station Sigonella, Sicily, Italy and the Middle East, in support of support global operations.

After reaching EOC, a second unmanned patrol squadron, VUP-11, will be stood up at Naval Air Station Whidbey Island, Washington. Flight testing of the initial three System Development and Demonstration aircraft at Naval Air Station Patuxent River, Maryland is also continuing and, according to Northrop Grumman, performance so far – including that of the Triton’s ZPY-3 Multi-Function Active Sensor X-band active electronically scanned array radar – is meeting or exceeding Navy specifications.

Shaffer said that Northrop Grumman is under contract for MQ-4C low-rate production Lots 1 and 2, made up of three aircraft each, and is currently negotiating for production Lot 3. The company is working towards the introduction of the multi-intelligence version of the Triton, which will have enhancements over the current baseline aircraft, including a signals intelligence payload, and will also replace the EP-3E ARIES II signals intelligence reconnaissance aircraft platform in US Navy service.

The Australian government has previously announced it intends to purchase seven Triton systems as part of its Air 7000 Phase 1B programme, but is yet to place an order. Also known as Integration Functional Capability 4 (IFC-4) configuration, the multi-intelligence Triton is due to enter service with the US Navy in 2021 and therefore its timing is important to the RAAF.

Shaffer said: “The timing is perfect for Australia to join the Triton programme.” Nigel Pittaway

The Predator participated in a US Navy exercise over the Southern California Off shore Range west of San Clemente Island on October 12, which included the remote detection and tracking of submerged objects. The RPA performed as a communications relay, receiving acoustic data from sonobuoys launched from Navy helicopters, before processing the information and retransmitting it to the MQ-9’s ground control station (GCS) several hundred miles distant.

A sonobuoy receiver and data processing technology supplied by Ultra Electronics and General Missions Systems-Canada was combined aboard the Predator airframe, enabling a tracking solution to be calculated and transmitted to the GCS via satellite communications.

GA-ASI CEO Linden Blue said: “This technology will provide longrange patrol and relay capabilities to the MQ-9 to augment maritime mission sets. This test demonstrated the ability of our RPA to detect submarines and provide persistent tracking of submerged targets.”

GA-ASI said that the Predator involved in the trials was also equipped with the company’s Lynx multimode radar, which features a maritime wide-area search mode, capable of detecting surface targets over a significant area and combining with inverse synthetic aperture radar to classify the targets. It also said the electro-optical/ infra-red camera on the Predator was capable of recording highdefinition, full-motion video images that, when correlated with the maritime automatic identification system, can verify target identity.

The company said: “Additionally, the MQ-9 can be fitted with a centreline pod that can house a longer-range, 360-degree field of regard surface search radar for enhanced surveillance over water.” Nigel Pittaway