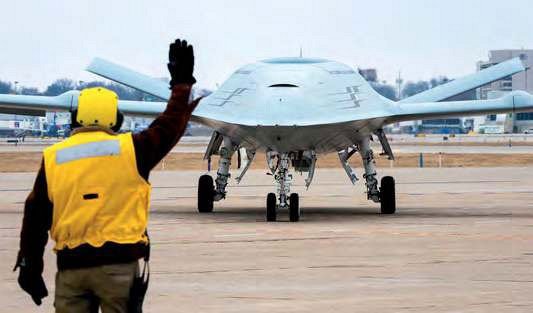 Boeing will design and build the US Navy’s first operational carrierbased UAV refuelling aircraft, the MQ-25A Stingray, intended to operate as an integral part of a carrier air wing. The rival bidders in the contest were General Atomics- Aeronautical Systems Inc and Lockheed Martin. Naval Air Systems Command (NAVAIR) said on August 30:

“Boeing received a ixed-priceincentive- irm-target contract with a ceiling price of $805 million for the design, development, fabrication, test, delivery and support of four MQ-25A unmanned air vehicles, including integration into the carrier air wing for an initial operational capability by 2024.”

The initial four aircraft will be built under the engineering and manufacturing development (EMD) phase of the programme.

The MQ-25A will join the carrier air wing in the next decade and undertake aerial refuelling, freeing up some F/A-18 Super Hornet strike fighters for combat duty.

NAVAIR said: “When operational, the MQ-25A will improve the performance, eiciency and safety of the carrier air wing and provide longer range and greater persistence tanking capability to execute missions that otherwise could not be performed.”

The US Navy has stated a requirement for 72 MQ-25As in addition to the four EMD aircraft. The contract includes an option for the first three production aircraft to be system development and test aircraft costing $28 million each.

During a brieing at the Pentagon on August 30, James Geurts, Assistant Secretary of the Navy for Research, Development and Acquisition, said the government will be responsible for developing the command and control system for the MQ- 25A. He said: “Total programme value is estimated at $13.3 billion comprising $3.8 billion for research and development and $9.5 billion for production.”

Planned initial operational capability for the MQ-25A is 2024, an advance in timeline from 2026. Initial light tests are planned for 2021, although Boeing is likely to fly its existing prototype by early 2019. Boeing built an air vehicle for the UCLASS (Unmanned Carrier-Launched Aerial Surveillance and Strike) system that it reconigured as a demonstrator for the MQ-25A competition. Boeing demonstrated the prototype in taxiing tests to Navy oicials.

NAVAIR said: “The intent is to signiicantly reduce development timelines from contract award to initial operational capability by five to six years. By reducing the number of key performance parameters to mission tanking and carrier suitability, industry has increased flexibility to rapidly design a system that meets those requirements.”

The contract award is the culmination of a competitive source selection process supported by personnel from NAVAIR and PMA-268, the Unmanned Carrier Aviation programme oice based at Naval Air Station Patuxent River, Maryland.

The MQ-25A is designed to integrate with a carrier’s catapult and launch and recovery systems. Boeing has selected Rolls-Royce to supply the AE 3007N engine, manufactured in Indianapolis and which provides more than 10,000lb (44kN) thrust, to power the aircraft. Boeing plans to perform the MQ- 25 work in St. Louis, the company said. Rick Burgess and Mark Broadbent