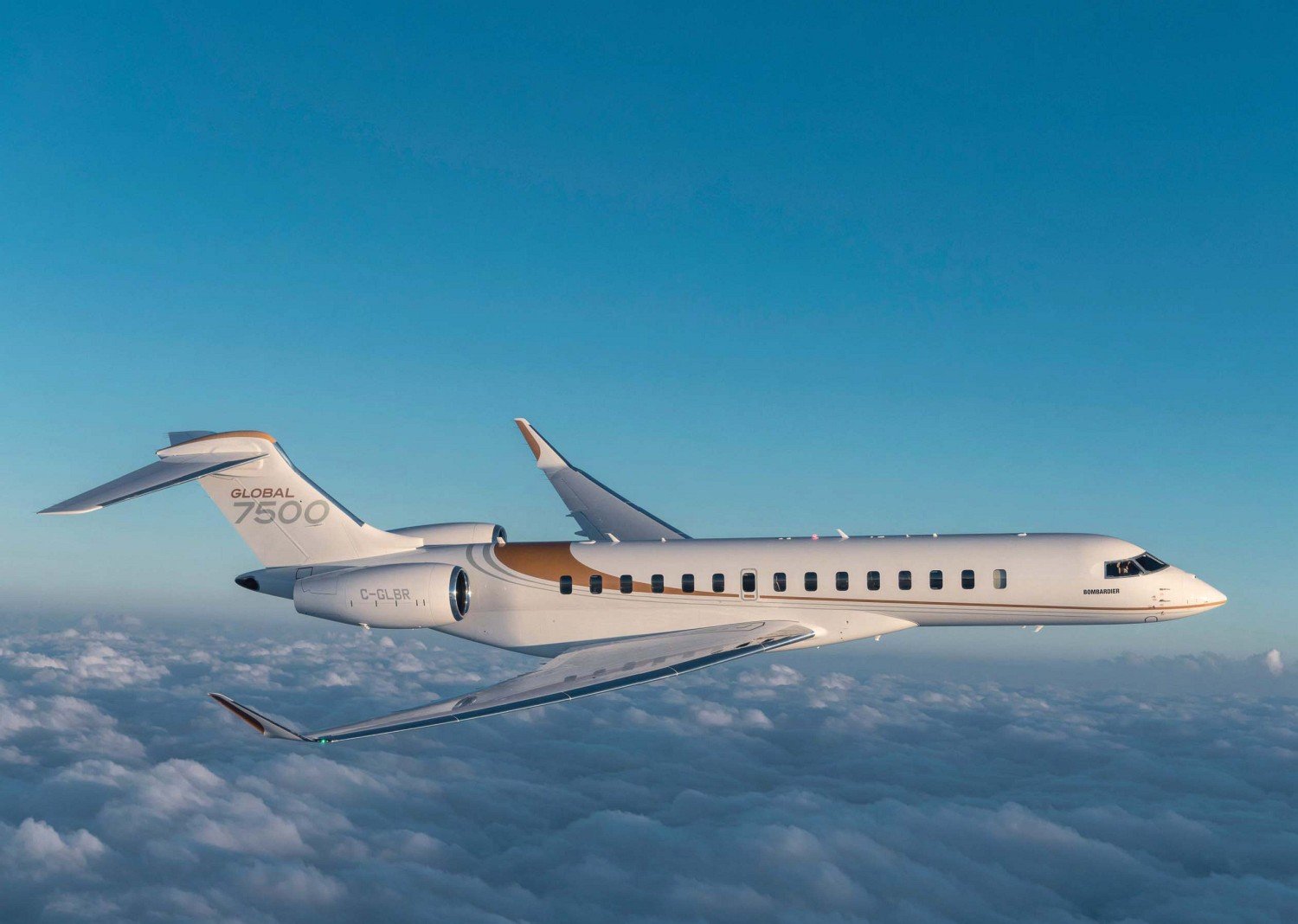 All images Bombardier Aerospace unless noted

Currently Bombardier’s flagship business jet, the Global 7500 is now in service with two operators and production is ramping up, with the company predicting between 15 and 20 aircraft will have been delivered by the end of 2019.

Originally designated Global 7000 by Bombardier, reflecting its intended range of up to 7,400 nautical miles (13,705km), the aircraft was rebadged as the Global 7500 in May 2018, after flight-testing revealed it was actually capable of flying distances up to 7,700 nautical miles (14,260km) under certain conditions.

Bombardier markets the Global 7500 as the only dedicated business jet that can offer four individual living spaces, as well as a crew rest area and it says the aircraft can carry up to 19 passengers at speeds of up to Mach 0.925.

The manufacturer sees the Asia-Pacific region as an important market for its range of business jets, including the Global 7500, and although it did not have a presence at the Australian International Airshow at Avalon in late February/early March, it kicked off a regional demonstration tour in Melbourne the following week.

The aircraft conducting the tour was C-FXAI (msn 70006), the first production aircraft delivered in December 2018. Bombardier took the opportunity to lease the aircraft back from its current owner for the sales tour, as its own demonstrator is not due for completion until later in 2019.

AIR International visited the aircraft immediately after its arrival in Melbourne on March 12, 2019. The aircraft had flown into Melbourne’s Tullamarine airport directly from Mahé in the Seychelles, completing the journey of 5,203 nautical miles (9,636km) in slightly under ten hours, cruising at 45,000ft and at speeds up to Mach 0.9 and landing with NBAA reserves of fuel on board.

Following its visit to Melbourne, coincident with the Formula 1 Grand Prix, C-FXAI visited Sydney and Perth, before embarking on a wider Asia-Pacific tour, which included a visit to the Asian Business Aviation Conference and Exhibition in Shanghai in early April 2019.

The Global 7500 design can trace its genesis back to 2006 when work began on the development of a concept that would result in two designs, the Global 7000 and the Global 8000.

The project was formally announced in 2010, with Bombardier predicting an entry into service for the Global 7000 in 2016, and 2017 for the Global 8000. However, the company elected to redesign the wing of the Global 7000 before the first flight of the prototype, which, together with other strategies to reduce the empty weight of the aircraft, somewhat delayed the programme and the first prototype, flight test vehicle 1 (FTV-1), did not make its maiden flight until November 2016.

The need for the wing redesign, coupled with the subsequent enhanced range performance of the Global 7500, has delayed development of the longer-range Global 8000, but Bombardier is adamant it will still build the aircraft.

Speaking in Melbourne after the arrival of C-FXAI, Bombardier Business Aircraft’s Sales Director for Australia and New Zealand, Paul Wauchope, said: “The Global 8000 is still on our horizon and we remain committed to it.

The aircraft will be 9ft shorter than the Global 7500 and will be similar in size to the Global 5500 and 6000, it will have three windows [fewer than] the 7500 and the cabin will feature three zones instead of four.”

According to Bombardier, the Global 7500 is a clean sheet design that leverages its previous Global aircraft and, apart from being larger, is very similar in external appearance to its predecessors.

The company chose to incorporate mature systems from across its commercial and business aircraft product range to aid development. For example, the hydraulic and electrical systems within the aircraft are based on those of the Global 6000, but expanded in capacity to meet the increased demands of the Global 7500 design. The fly-by-wire flight control system is based on that of Bombardier’s commercial C series airliner, which is now marketed as the Airbus A220. Four of the five flight test aircraft (FTV-1 to FTV-4) featured the earlier, heavier, wing design, but the final prototype, FTV-5, is a production representative aircraft with the redesigned wing.

The aircraft is powered by two General Electric Passport engines, each producing 18,650lb (83kN) of thrust, de-rated from 20,000lb (89kN). The initial engines supplied to the flight test programme were heavier than the examples on the first production aircraft; the engine type underwent a weight reduction programme to provide the required performance guarantees.

Bombardier’s brochure figures suggest a top speed of Mach 0.925, a figure later confirmed during a flight between Los Angeles and New York in late March 2019, which claimed a speed record between the city pair. Typical cruise speed is reported to be Mach 0.85, with a sustained high-speed cruise of Mach 0.9.

Commenting on the flight of C-FXAI from Mahé to Melbourne, Paul Wauchope said: “The guys today flew the sector in just under ten hours and they did it at Mach 0.9 the whole way. We have a long-range cruise speed of Mach 0.85, which will give us 7,700 nautical miles – based on four crew and eight passengers – or we can push the speed envelope to Mach 0.9 and still have a comfortable ten-hour endurance. Today’s flight was just under ten hours at 45,0000ft.”

Wauchope added that the Global 7500 can take off at maximum take-off weight (MTOW) and climb directly to an initial cruise altitude of 43,000ft, with a maximum service ceiling of 51,000ft. 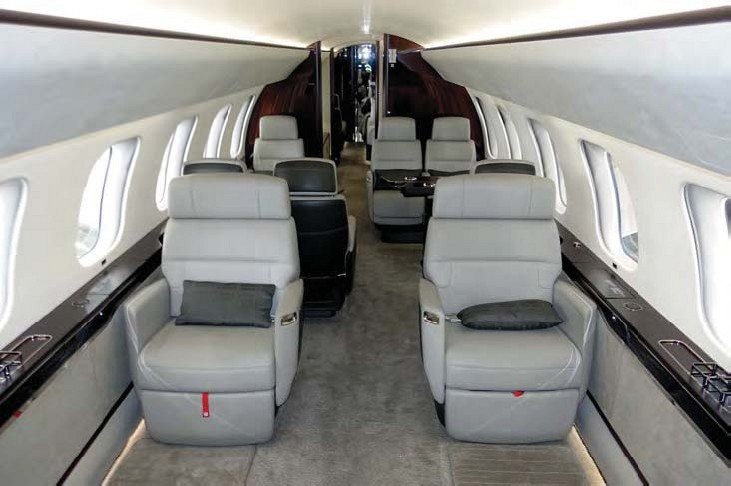 Bombardier markets the Global 7500 as the only dedicated business jet on the market today with four individual cabin zones.
Nigel Pittaway

The two-crew cockpit is equipped with Bombardier’s Vision avionics system, which is based on Collins Aerospace’s Rockwell Fusion system. Paul Wauchope explained: “It’s exactly the same avionics suite that is in the Global 6000 and C Series [A220]. It’s tried and tested and the only difference as far as the flight deck is concerned is the sidestick controllers on the Global 7500, which are not on the Global 6000, but are a feature of the C Series.

It worked fantastically well on the C Series, so we adapted it for the Global 7500.”

The flight deck also has a head-up display and enhanced vision system for the left-hand (captain’s) seat in the baseline configuration, but Wauchope says these features can also be added for the right-hand seat as an option.

The Global 7500 is capable of steep approaches and the flight manual supplement for airports such as London City is already in place and awaiting regulatory approval.

The aircraft is also designed for 180-minute extended operations, but as of early March it did not yet have the flight manual supplement to support them.

Located immediately behind the flight deck is a comprehensively equipped galley (referred to by Bombardier as a kitchen) and opposite, aft of the forward entry door, is a dedicated FAR Part 135-compliant crew rest area.

Immediately behind the kitchen is the forward lavatory, accessible by crew and passengers.

A bulkhead behind the crew rest area (left) and lavatory (right) is the entrance to the four passenger zones. In the baseline aircraft, the forward-most zone, zone one or principal zone, has the option for two sets of double club seating or a conference area. Moving aft, zone two is the standard conference area/dining, and further aft again is the entertainment area, with a credenza on the right-hand side, aft of the emergency exit. Opposite is a 32-inch (810mm) fully reclining divan in the baseline aircraft, with the option of a 40-inch (1.01m) unit, if desired.

The fourth cabin zone contains a stateroom with permanent 45-inch wide (1.15m) bed as standard, or with the option of a 53-inch (1.35m) bed. The en suite bathroom in this zone can be fitted with an optional stand-up shower.

Aft of the main cabin is a 195ft³ (5.52m³) pressurised baggage hold, which is fully accessible in flight and has a plug-type door for access from outside of the aircraft.

The cabin seats are the Bombardierdeveloped and award-winning Nuage design and the cabin management system is Lufthansa Technik’s ‘Nice Touch’.

The prototype Global 7000 (as it was then known), FTV-1, flew for the first time from Bombardier’s test facility in Toronto on November 4, 2016, under the command of Captain Ed Grabman, assisted by co-pilot Jeff Karnes and flight test engineer Jason Nickel. This first aircraft was used to assess handling qualities and envelope expansion and achieved a speed of Mach 0.995 during flight-testing in 2017.

The second aircraft, FTV-2, followed on March 6, 2017 and was primarily used in the testing of propulsion and hydraulic systems. FTV-3 joined the test fleet after its initial flight on May 10, 2017. Dubbed ‘The Navigator’ by Bombardier, the aircraft was used to test the Global 7000’s avionics and electrical systems and was the first to be fitted with a dual HUD. 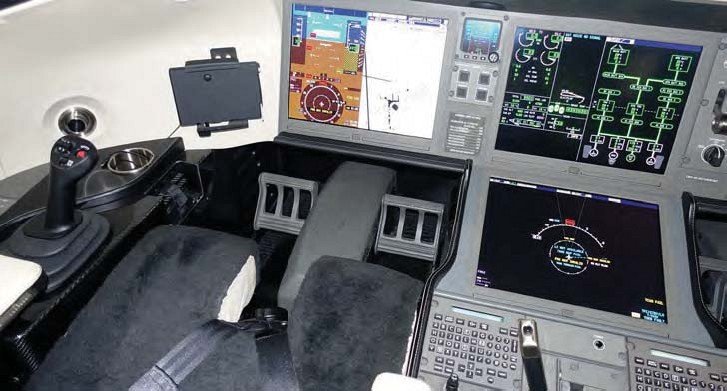 The major difference between the Global 7500 flight deck and the company’s Global 6000 business jet is the use of sidestick controllers for the fly by wire flight control system. The controllers are based on those fitted to the C Series (Airbus A220) airliner.
Nigel Pittaway 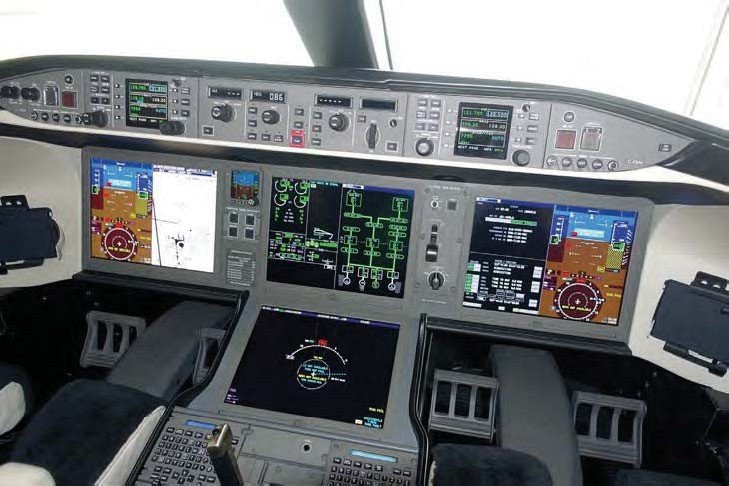 The Bombardier Global 7500 flight deck is based on that of the company’s Global 6000 business jet and C-series (since rebranded as the Airbus). 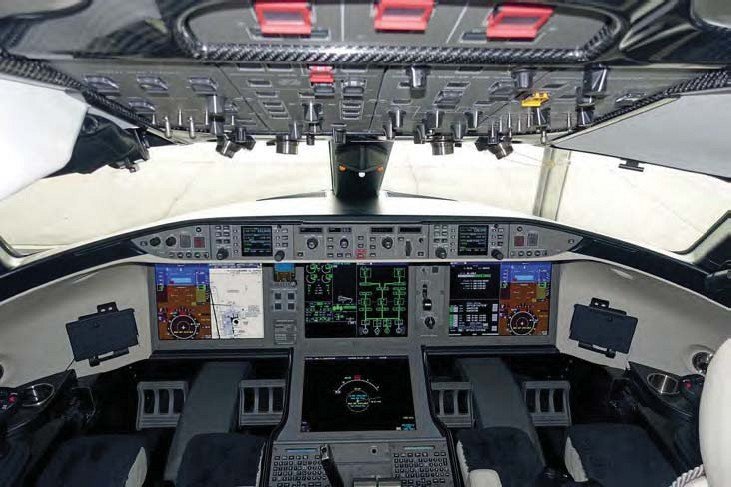 The fleet of three test aircraft had surpassed a cumulative total of 500 flight hours by July 2017 and the fourth aircraft, FTV-4, made its maiden flight two months later, on September 28, 2017. Dubbed ‘The Architect’, FTV-4 was primarily used for interior validation testing and the final aircraft, FTV-5 ‘The Masterpiece’ followed on January 30, 2018.

The Global 7500 was awarded Type Certification by Transport Canada, after a flight test programme which spanned in excess of 2,700 flight hours on September 28, 2018 and US Federal Aviation Authority certification followed around six weeks later, on November 7, 2018.

Following approval by the two North American Authorities, C-FAIX was handed over to the launch customer in a ceremony at Bombardier’s recently inaugurated Laurent Beaudoin Completion Centre in Montreal on December 20, 2018.

Once in service, the Global 7500 did not waste any time accumulating accolades, with Bombardier claiming a world record for the longest flight ever flown by a purpose-built business jet, with a flight of 8,152 nautical miles (15,097km) between Singapore’s Changi Airport and Tuscon International Airport, Arizona, in early March 2019. This was followed by claims for speed records between Los Angeles and New York and the transatlantic journey between White Plains, New York and Luton, UK later the same month.

Paul Wauchope told AIR International that Global 7500 production is expected to reach the full capacity of 40 aircraft per year in 2020 and the next available production slot for a new customer is in the second quarter of 2022, by which time in excess of 120 will be in service.

One of the early customers for the aircraft is US fractional ownership operator Netjets, which announced in October 2018 that it would take delivery of the first of an unspecified number of Global 7500s in 2021.

Another early customer is Hong Kong’s HK Bellawings Jet Limited, which signed a letter of intent for “multiple” Global 6500 and 7500 aircraft in May 2018 and firmed up an order for four Global 7500s at the ABACE show in Shanghai on April 14, 2019.