Kees van der Mark reports on the rapid reaction test deployment of F-35As to the Netherlands, the latest milestone in the Dutch F-35 programme

TWO KONINKLIJKE Luchtmacht (KLu, Royal Netherlands Air Force) F-35A Lightning IIs operated by 323 Test and Evaluation Squadron (TES) based at Edwards Air Force Base, California, wrote history on June 13 when they released the first bombs ever dropped by the type on Dutch soil. The jets deployed to the Netherlands for a rapid reaction test as part of the F-35 Initial Operational Test and Evaluation (IOT&E) programme. Both F-35s struck targets at the Cornfield range on the isle of Vlieland on a long-range mission right after crossing the Atlantic, landing at Volkel Air Base afterwards.

Major Pascal Smaal, one of four KLu pilots within 323 TES coordinating the deployment, explained that initially the Air Force wanted to test the type of mission combined with a weapon drops at an American range at long distance from Edwards. He said: “When this turned out to be impossible within the available timeframe, we opted for a longrange mission to the Dutch range. We chose to plan the event in the second week of June, thus enabling the F-35s to appear at the KLu’s Air Force Days at Volkel as well.”

Although the first Dutch F-35A made its maiden flight on August 6, 2012, this was only the second time KLu F-35s had be seen in the Netherlands. The KLu’s new combat aircraft first visited the Netherlands when both F-35As acquired for test purposes – F-001 (c/n AN-01) and F-002 (c/n AN-02) – stayed at Leeuwarden Air Base between May 23 and June 14, 2016. In that period, the jets carried out a series of noise comparison flights with F-16s at Leeuwarden and Volkel, and ground tests at Leeuwarden. Both F-35s also participated in the flying programme of the Air Force Days 2016 at Leeuwarden, marking the F-35’s European air show debut.

Major Smaal explained to AIR International more about this year’s deployment: “The main goal of the rapid reaction test was to validate execution of a long-range strike mission with minimal planning time and the smallest possible footprint – in terms of maintenance support and spare parts – including a landing in the vicinity of the strike area afterwards to service, refuel and re-arm the aircraft to conduct a similar, second mission; followed by a third one.”

Jets used for this deployment were F-001 and F-008; both are based at Edwards as part of the Joint Operational Test Team (JOTT) to participate in the multinational F-35 IOT&E.

Aircraft F-008 (c/n AN-08) only arrived at Edwards on May 10, 2019, to temporarily boost 323 TES’ capacity to three aircraft and participated in several test events. The jet was scheduled to join the 308th Fighter Squadron at Luke Air Force Base, Arizona in late July, for pilot training within the international F-35 Pilot Training Center (PTC).

Planning and preparations for the Dutch deployment were in full swing at Edwards when KDC-10 T-235 of Eindhoven-based 334 Squadron arrived at the Californian base on Friday, June 7. The KDC- 10 was called upon to transport the personnel needed to support the deployment and refuel the jets on their way to Europe. Departing Edwards on June 10, the two F-35s flew to Naval Air Station Patuxent River, Maryland, while the KDC-10 continued to Bangor Air National Guard Base, Maine.

A first attempt to cross the Pond on June 12 as scheduled failed, because an engine problem prevented the KDC-10 from taking off. The F-35s then relocated to Bangor, in an attempt to continue the ferry flight as soon as the KDC-10 was serviceable again.

A second attempt was made in the morning of June 13, when both the KDC-10 and the F-35s took off from Bangor after which the KDC-10 had an issue with its aerial refuelling boom, making it impossible to refuel the jets. This forced the F-35s to divert to Goose Bay in Labrador, Canada. Luckily, the KLu’s second KDC-10 (T-264) had just emerged from scheduled maintenance and was on its way back to Eindhoven with a full crew on board, including a boom operator. The crew was quickly re-tasked by 334 Squadron Ops to fly to Prestwick Airport, Scotland, refuel there and continue to a rendezvous point near Greenland to pick up the F-35s. This allowed the Dutch jets to conduct their long-range strike mission on June 13 after all, landing at Volkel around 2200hrs after an eight-hour flight; just in time to participate in the air show that kicked off the next morning. 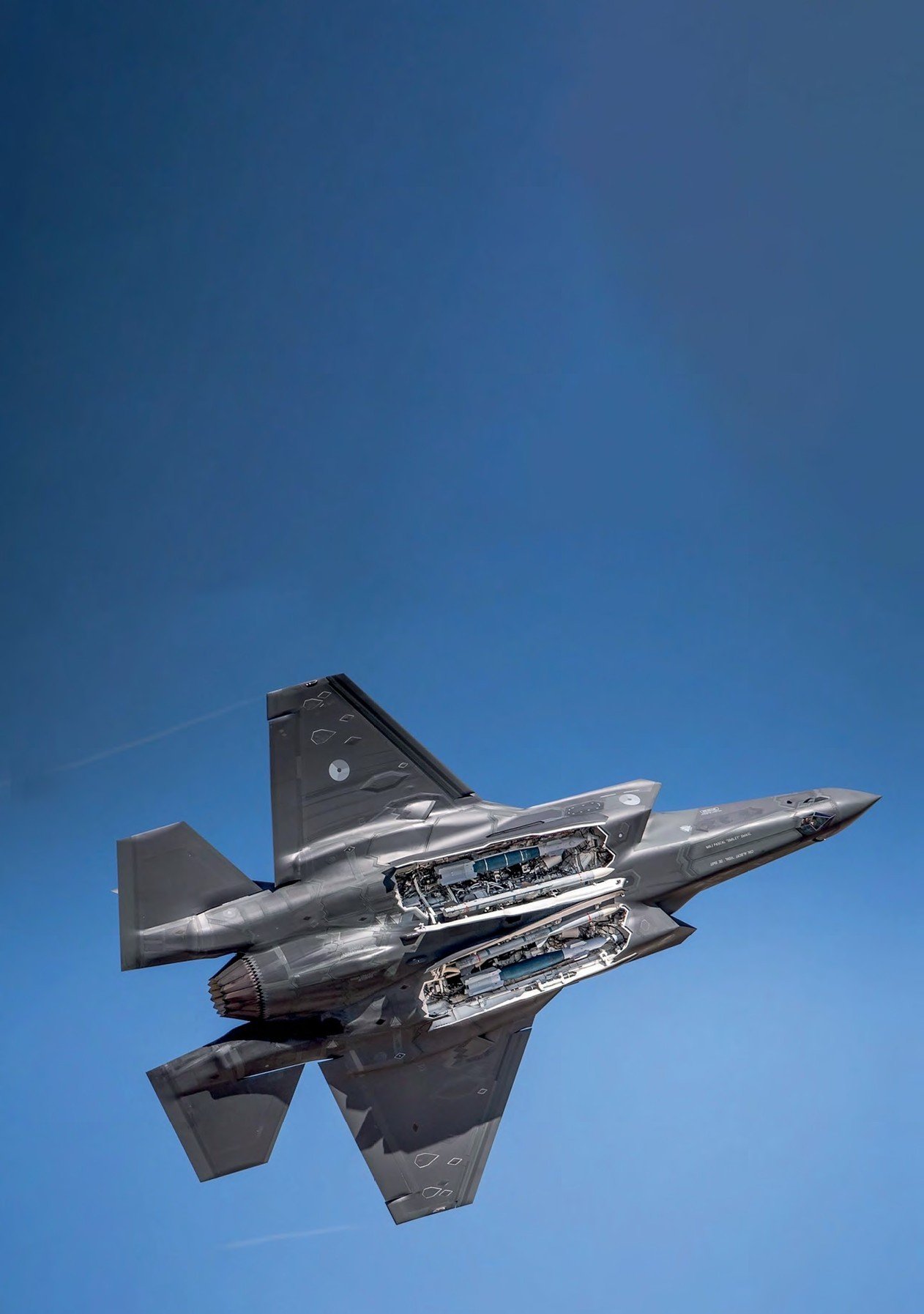 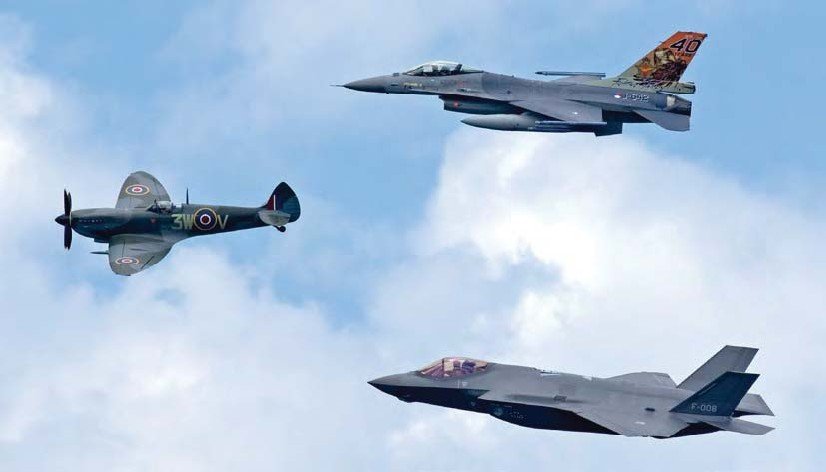 The presence of the F-35s at Volkel Air Force Days made this unique formation possible. F-16AM J-642 carries special tail markings to celebrate 40 service years of the type within the KLu. Spitfire XVI TB885/G-CKUE recently started flying in the Netherlands.

The unfortunate KDC-10 T-235, carrying the personnel needed in the Netherlands for the F-35 deployment, continued across the Atlantic and landed at Eindhoven in the afternoon of June 13, with its stablemate T-264 returning home mid-evening. Meanwhile, a US Air Force C-17A Globemaster III from the 452nd Air Mobility Wing based at March Air Reserve Base, California, arrived at Volkel on June 12 loaded with ground equipment and spare parts needed for the deployment.

Once the F-35s entered Dutch airspace and approached the Cornfield range in the evening of June 13, they contacted the tower at the Cornfield range. During this mission, F-001 was flown by Colonel Bert de Smit, commanding officer of the Netherlands F-35 OT&E Detachment at Edwards, while 323 TES’ commander Lieutenant Colonel Ian Knight flew F-008. Each aircraft dropped two inert bombs from medium altitude including a 500lb (227 kg) GBU-12 laser-guided bomb and a dualmode 500lb GBU-49.

All four bombs hit their intended targets, one penetrating piled up 20-feet sea containers from top to bottom. At the range, the F-35 pilots worked with Netherlands Special Operations Command (SOCOM) joint terminal attack controllers (JTACs), who illuminated each target with a laser from their observation post in the dunes and used digital target assignment. On Friday, June 14, 323 TES pilot Major Mirko, flew F-008 for a flight demonstration making a single pass and a formation fly-by with ten F-16s as part of the KLu’s air power demo. Before landing the F-35 also took part in a KLu heritage flight formation with an F-16AM and a Spitfire MkXVI. The next day, Major Smaal gave similar displays using F-008.

Both F-35s were scheduled to return to the United States on June 17. In the end only F-008 made the take-off. Flown by Major Pascal Smaal, the jet took off in the early morning for another strike mission at the Cornfield range, dropping two GBU-49s, after which Smaal flew the aircraft direct to Bangor supported by a KDC-10.

At Bangor, Major Mirko took over and flew the jet to Edwards arriving the same day together with the KDC-10.

Meanwhile back at Volkel, F-001 awaited repairs, which required a replacement part from the United States. The jet remained at Volkel in early July and was expected back at Edwards later that month.

Despite the technical set-backs encountered, the deployment was regarded a successful test by all involved. 323 TES’ commander Lieutenant Colonel Ian Knight sent out this Twitter message on June 15: “Lots of learning/ testing and a great couple of days!” Followed by another tweet on June 19, saying: “Would have loved to take F-001 back with us this week, but sometimes even this mighty machine breaks.

However, from an operational test perspective it’s a great learning opportunity on logistics, manning and support equipment.”

This is an important year for the Dutch F-35 programme, with many milestones reached and more to come. At Luke Air Force Base, the Nederlands Opleidingsdetachement F-35 (NODF-35, Netherlands F-35 Training Detachment) took delivery of five F-35As. After its roll-out ceremony in Fort Worth, Texas, on January 30, aircraft F-003 was the first to arrive at Luke on February 4, followed by F-004 on February 7, F-006 on March 6, F-007 on March 12 and finally F-005 on March 19. The NODF-35 is integrated in the 308th Fighter Squadron ‘Emerald Knights’, which was reactivated within the 56th Fighter Wing on November 30, 2018.

The Emerald Knights are tasked to train American, Dutch and – from 2020 – Danish F-35 pilots. By late June 2019, the first Dutch instructor pilot had finished his conversion to the F-35 while a second was due to follow. Another two Dutch instructor pilots had made their first flights in the F-35 by then and the first operational F-16 pilots also commenced their transition to the new jet.

Once the IOT&E flying phase is concluded at Edwards, probably towards the end of this year, F-001 will relocate to Luke as well. No decision has been taken on whether the KLu will continue its involvement in operational testing of the F-35 at Edwards or not. But with F-002 wired as a dedicated test aircraft, it is likely the jet will stay committed to test flying in the future.

Next on the calendar is the delivery of aircraft earmarked for the KLu’s first operational F-35 squadron at Leeuwarden. Unlike the eight Dutch F-35As already delivered, the remaining 29 of 37 Dutch aircraft ordered to date will not be built in Fort Worth, but by the Final Assembly and Check-Out (FACO) facility at Cameri, Italy. Roll-out of F-009 (c/n AN-09) is expected in the second week of September, with delivery to Leeuwarden scheduled on October 31. F-010 should arrive at Leeuwarden before the yearend and another eight in 2020. At Leeuwarden, the F-35s will initially operate in a newly established temporary squadron alongside 322 Tactical Training, Evaluation and Standardisation Squadron (TACTESS). The latter should stop flying F-16s in 2021, after which the temporary F-35 unit will be renumbered 322 Squadron.

Meanwhile an order for additional F-35s is anticipated, since the Dutch Minister of Defence Ank Bijleveld expressed her intention last December to acquire another 15 or so F-35As. In the end, the KLu hopes to get 67-68 F-35As, enough to equip four operational squadrons with 15 jets each, with the balance operating in the US for training and flight testing. 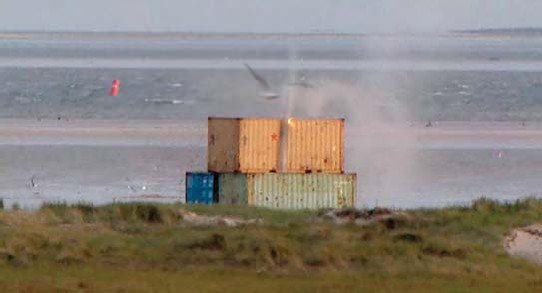 This shot grabbed from a video shows a direct hit by one of the bombs dropped by a Dutch F-35A during a long-range strike mission to the Cornfield range on June 13.
Sgt Maj Ruud Mol/Dutch MoD