Saab delivered the first Gripen E to the Brazilian Air Force in September – a significant milestone on the journey since Brazil had selected the Swedish option for its F-X2 programme. João Paulo Moralez brings Air International up to date with the Latin American part of the project.

The first Brazilian JAS 39 Gripen E during its maiden flight on August 26.
Saab

The temperature was mild and pleasant on the afternoon of September 10, 2019 when, in contrast to the grey overcast, a Saab Gripen tore through the sky over Linköping aerodrome in Sweden sporting a smart two-tone grey camouflage, a pixelated design on its wings and a stylised Brazilian flag on the vertical stabiliser. This was the first JAS 39 Gripen E for the Brazilian Air Force (Força Aerea Brasileira, FAB) and it was a significant moment on the path of a major evolution for air power in Latin America. With the serial FAB 4100 and under the command of Saab test pilot Marcus Wandt, the five-minute display marked an historic moment in the modern history of FAB.

Saab won the F-X2 competition on December 18, 2013 and was contracted to supply 28 single-seat Gripen Es and eight Gripen F two-seaters in a contract worth $4.8bn. In typical Swedish style, the deal includes a comprehensive transfer of technology and the involvement of Brazilian defence companies, and totals an impressive 60 projects generating 14,000 direct and indirect jobs. 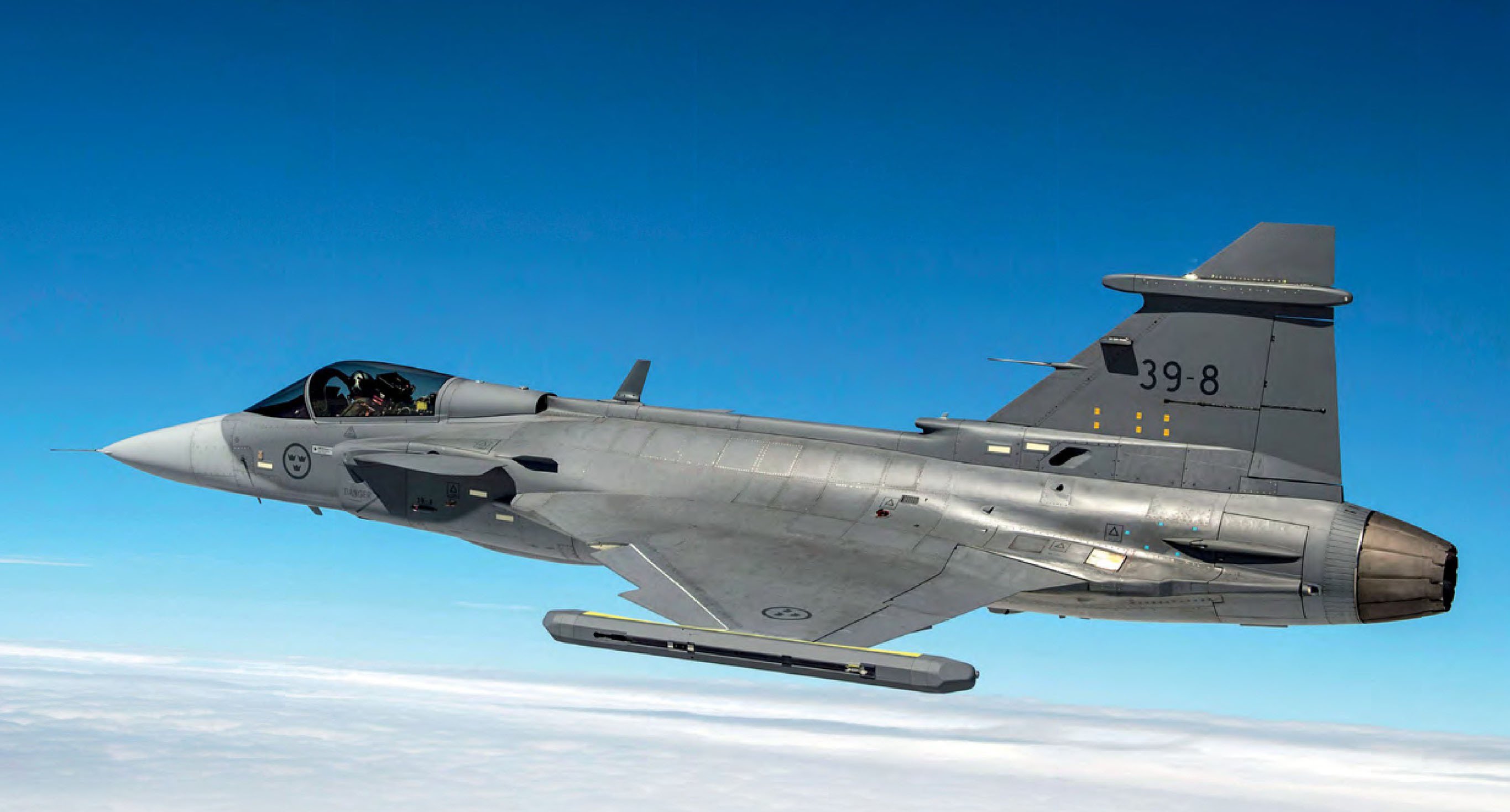 Gripen E serial 39-8 was the first prototype of the new variant. Notable external differences are the air inlet close to the vertical stabiliser, new wing tip electronic warfare pods and a new antenna on the fin.
Saab

Saab’s sales package for Brazil includes simulators, spare parts, training, technical assistance and logistic support. The first four fighters are expected to reach the 1st Air Defence Group at Anápolis from October 2021, with deliveries of the first batch of 36 fighters set to be completed in 2026. The current handover timetable foresees a cadence of four fighters by 2021, seven in 2022, six in 2023, eight in 2024, nine in 2025 and the final pair in 2026.

These aren’t carbon copies of Swedish Gripen Es; Brazil gave special attention to armament and sensors. Air-to-air missiles will include Diehl’s IRIS-T, in addition to the similar short-range A-Darter missile, which has been developed under a joint programme between Brazil and South Africa. A-Darter of ers thrust vectoring, a range of 9 miles (15km) and lock-on after launch capability, engaging targets that are of -boresight to the tune of 90º from the direction of flight of the Gripen. Brazil has also acquired 100 MBDA Meteors; Gripen was notably the first fighter able to carry this revolutionary long-range, ramjet-powered missile. 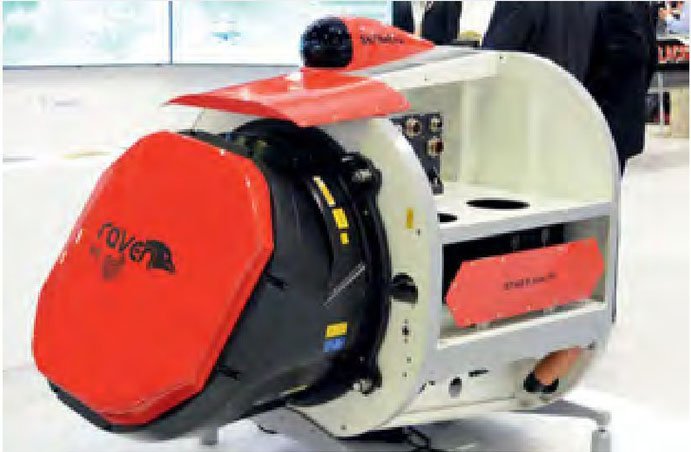 Air-to-surface armament includes the subsonic RBS15 anti-ship missile with active J-band radar guidance gives it a potent range of 124 miles (200km). There is also the Spice 250 standof GPS-guided bomb and for reconnaissance and target designation missions the Reccelite XR and the Litening V pods from Rafael are included.

Swedish and Brazilian Gripens have slight differences in their communication, datalink and electro nic countermeasure systems. The fighters will be equipped with a trio of state-of-the-art Leonardo mission systems: identification friend or foe (IFF) in the form of the E-Scan M426S, which features three antennas located on either side of the nose, close to the radar, and one above it; the Skyward-G infrared search and track system (IRST), which performs short- and long-range passive target searching; and the Raven ES-05 Active Electronically Scanned Array (AESA) radar. 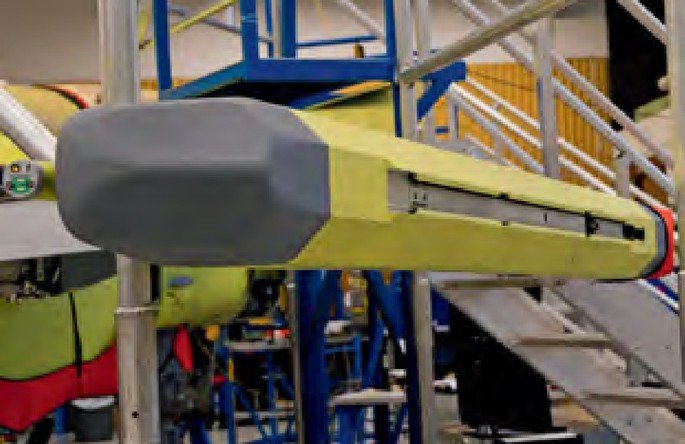 Unlike the Swedes, Brazil opted for a two-seat Gripen F, which will initially be used for the operational conversion of pilots. Brazil will be responsible for the development of this variant and the addition of a rear cockpit as well as an increase in the oxygen system, a revised electric power system and redesigning the forward fuselage and the air inlet. Work on the environmental control system, pilot interface with avionics and displays are also being developed in Brazil, as are studies of both elasticity and loads.

In addition to training, the Gripen F is also touted as being an ideal electronic attack platform and the FAB is known to be lining up the Gripen F for this mission while the Saab Arexis electronic warfare pod is a possible addition. 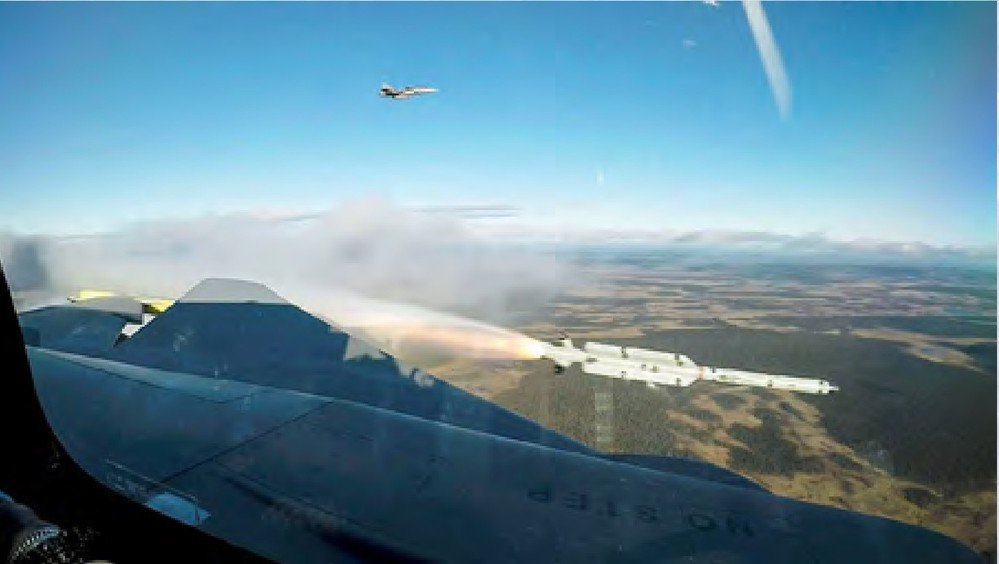 Saab will ultimately employ seven aircraft that will – at the end of the main campaign – be delivered to customers. Six Gripen Es (five Swedish and one Brazilian) and one Gripen F (Brazilian) will ultimately be evaluated by a team of some 270 people.

Gripen ‘Demo’ serial 39-7 has served as a technology demonstrator for the JAS 39E. It features the same General Electric F414-GE-39E engine, redesigned undercarriage, avionics and AESA radar. Significantly, it has also served as the testbed for the new wide area display (WAD), designed and manufactured by Brazil’s AEL Sistemas, and now installed in the rear cockpit of this jet. 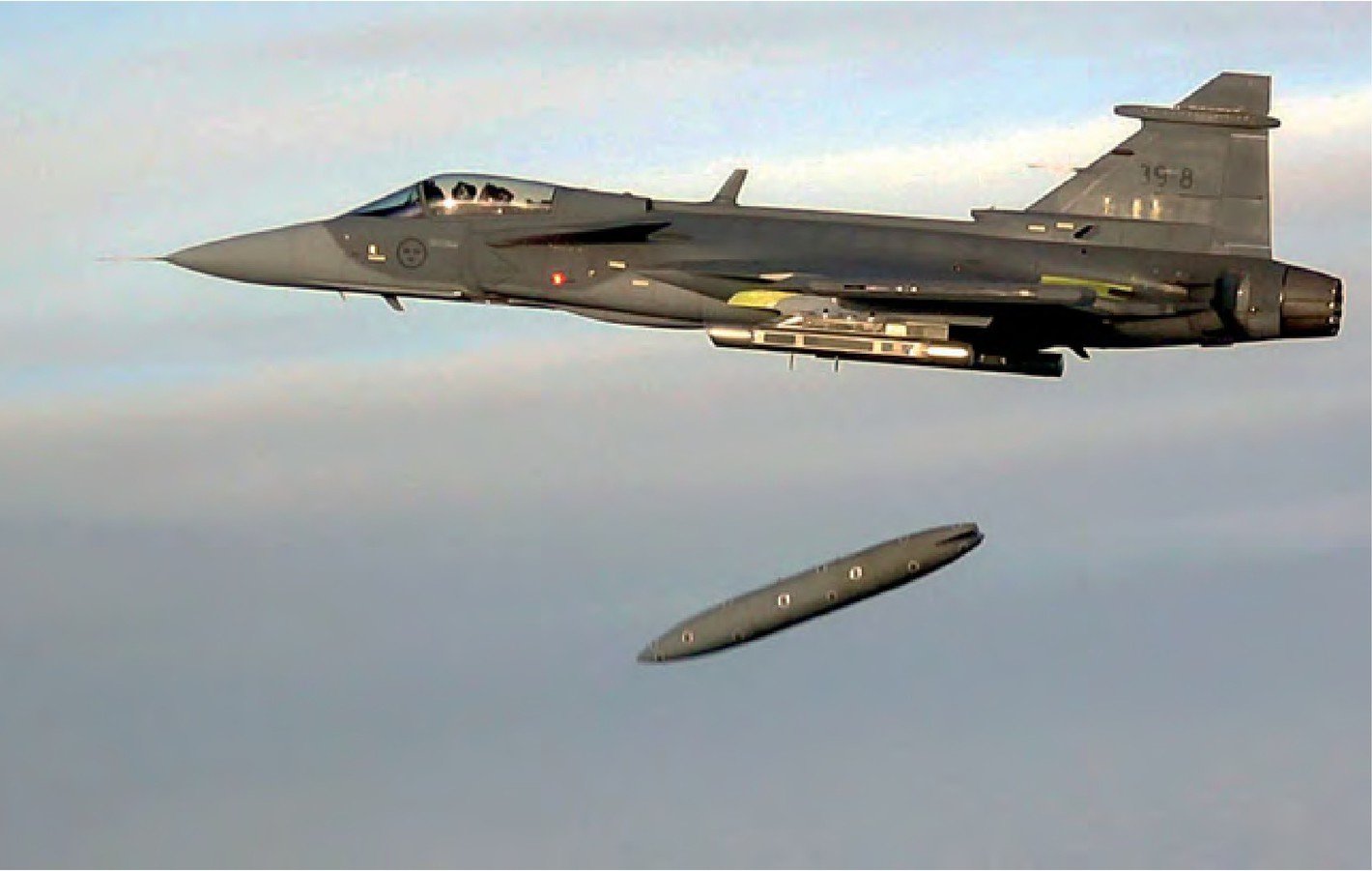 On June 15, 2017, test aircraft 39-8, the initial Gripen E, flew for the first time. By September 2019, this fighter had notched up 150 hours including trials at the Vidsel Test Range in northern Sweden for external load separation and the first firing test with the IRIS-T missile. The second Gripen E (39-3) undertook its first flight on November 1, 2018, on this occasion Robin Nordlander was at the helm. Having so far flown around 50 hours, this aircraft is used to evaluate the electronic warfare suite, radar, IRST and Link 16 systems. Third aircraft 39-10 is early in its test work, having first flown on June 10, 2019, and is focused on armament clearances and development of the tactical systems.

This jet is explicitly responsible for expanding the flight envelope, testing the Brazilian-specific systems, and the new flight control system. It was also the first Gripen E to be fitted with the WAD.

The aircraft is expected to remain in Sweden until September 2020, during which time it is slated to complete 100 flights before it is shipped to Brazil. 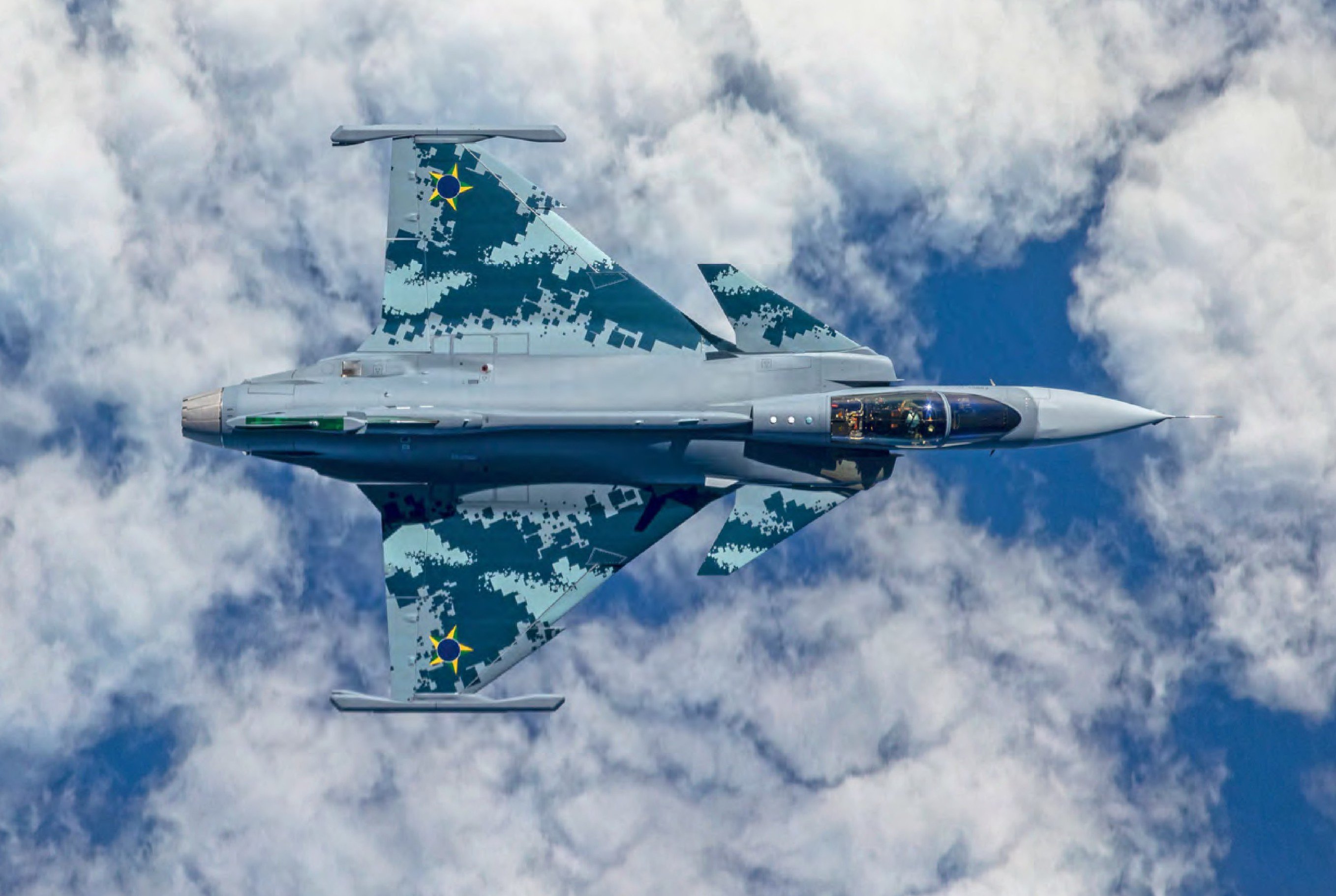 It is important to note there will be a transfer of technology in the flight-testing programme, starting from early 2020 through to the opening of a dedicated facility in Gavião Peixoto. Some 15 Saab experts will spend a period in Brazil exchanging knowledge with both Embraer and FAB teams.

Six Brazilian companies are involved in the local production ef ort for the Gripen, led by Embraer. By 2023, when the first Gripen F leaves the Brazilian production line, all remaining test work will be completed locally.

In fact, some 900 flight-tests are planned for the Gripen E and Gripen F, extending until 2024 when the aeroplanes will be delivered to the FAB.

For the FAB itself, initial operational capability (IOC) will focus on air-to-air missions, before air-to-surface, maritime and ISR (intelligence, surveillance and reconnaissance) are added for full operating capability (FOC) in 2025. 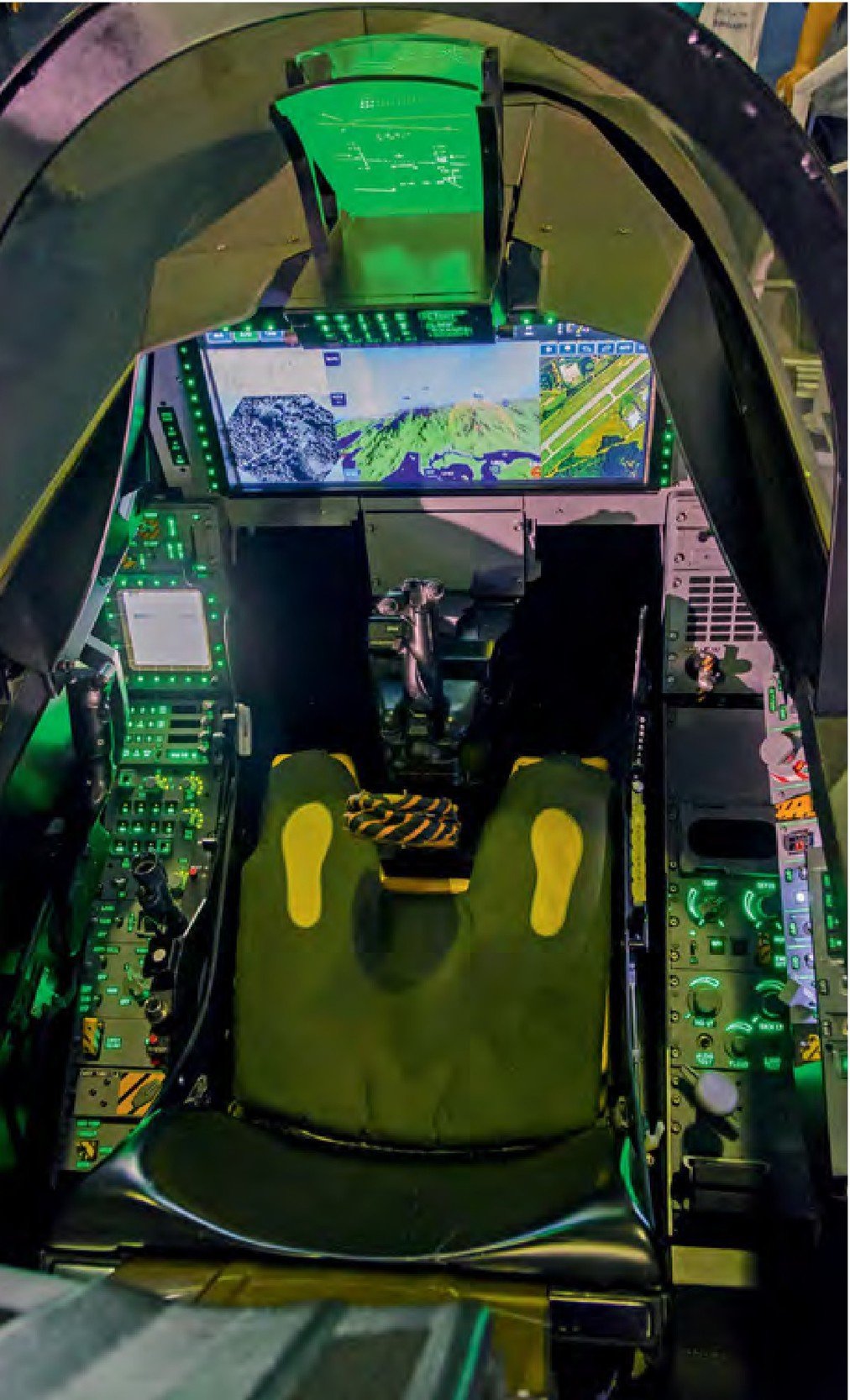 As far back as 2009, the Akaer company from São José dos Campos was hired by Saab to develop major components for the new Gripen, such as the rear and centre fuselage section, main landing gear door and wings, even before being selected for the F-X2 programme. It was a typically smart move by Saab. A combined virtual work environment was created, integrating the companies for project-sharing, discussion and document reviews. Saab currently owns 40% of Akaer shares. 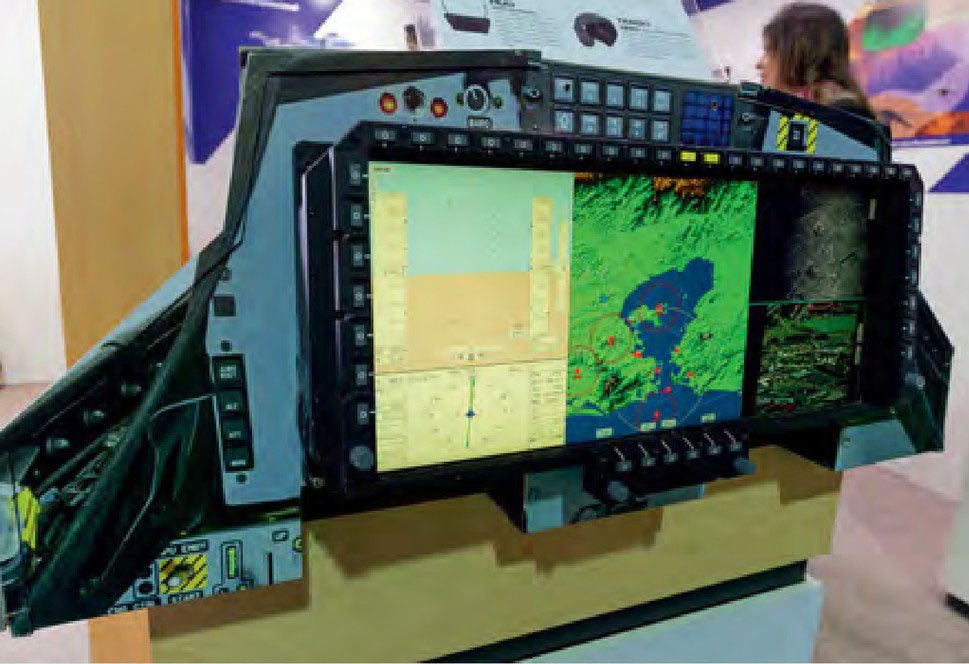 A detail view of the 19 x 8in WAD.
João Paulo Moralez

In October 2015, with F-X2 signed, the first 50 Brazilian engineers from various companies arrived at Saab’s Linköping installation for training. Today there are 200 Saab-trained employees working with Embraer, Akaer, AEL Sistemas and Atech. By 2024, more than 350 Brazilians will have attended courses and training in Sweden. Upon their return to Brazil, most will be employed in the Gripen Design and Development Network (GDDN), inaugurated on November 22, 2016 and installed at Embraer’s Gavião Peixoto unit.

The site neatly represents the overall level of technology transfer as Brazilian technicians and engineers from all participating national companies and Swedish teams combine. Already, 110 of the 280 employees expected to work at the GDDN are at Gavião Peixoto. 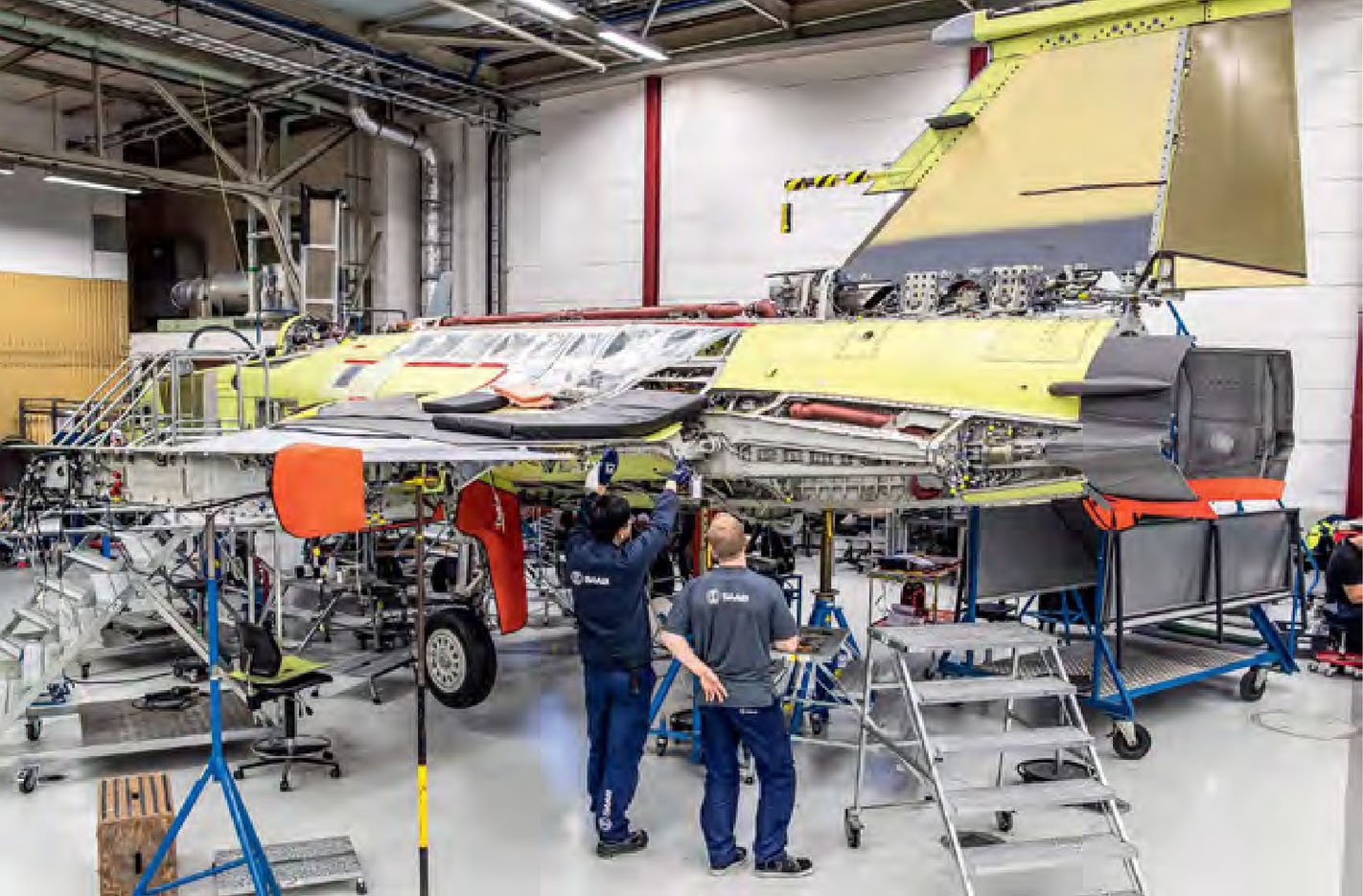 The first Brazilian Gripen E (F-39) in final assembly in Linköping.
Saab
AEL Sistemas, based in Porto Alegre, entered the programme in February 2015 when it was formally selected by Saab. Its WAD system is a single 48 x 20cm (19 x 8in) touch screen display with redundant high-resolution systems incorporated.

Because it is panoramic, it allows better visualisation and rapid assimilation of information to the human eye.

AEL Sistemas is also responsible for the development of the head-up display (HUD) and Targo helmet-mounted display.

Atech is developing flight simulators, training and ground support systems. It will develop geo-referenced data based on Brazilian maps. Atmos Sistemas will maintain the F-39’s electronic warfare systems and other sensors, including the Raven ES-05 radar.

In the production phase, 13 of the 36 aircraft will be manufactured by the Swedes, eight by Brazilians in Sweden and 15 in Brazil. Saab Aeronáutica Montagens (Saab Aeronautics Assemblies, SAM) in São Bernardo do Campo, will produce structural segments such as the tailcone, the airbrakes, wing, rear and front fuselage. For a two-year period, Saab will keep seven employees in place to assist with the spin-up.

The first Brazilian Gripen E at the delivery ceremony in Linköping in September.
João Paulo Moralez

Over the next 15 years, Saab expects to sell more than 300 Gripen E/F aircraft, worldwide. In the short term, Brazil is unlikely to make additional acquisitions.

However, as the economic situation improves and delivery of the first batch of 36 aircraft is under way, it is only natural that more will be bought – there is a real need for fleet replacement and renewal, requiring more rounds of fighter purchases.

The FAB currently operates six fast jet squadrons served by an available fleet of 14 Embraer AMX A-1AM/BMs and 51 Northrop F-5EM/FMs, giving a total of 66 (not including those in deep maintenance).

These will be replaced by 36 Gripens, for an average of six aircraft per squadron.

Even with its high availability rates, the FAB has a clear case for at least doubling its Gripen requirement.

Coupled with other potential customers, the future looks extremely strong for the Gripen E in Sweden, Latin America and worldwide. 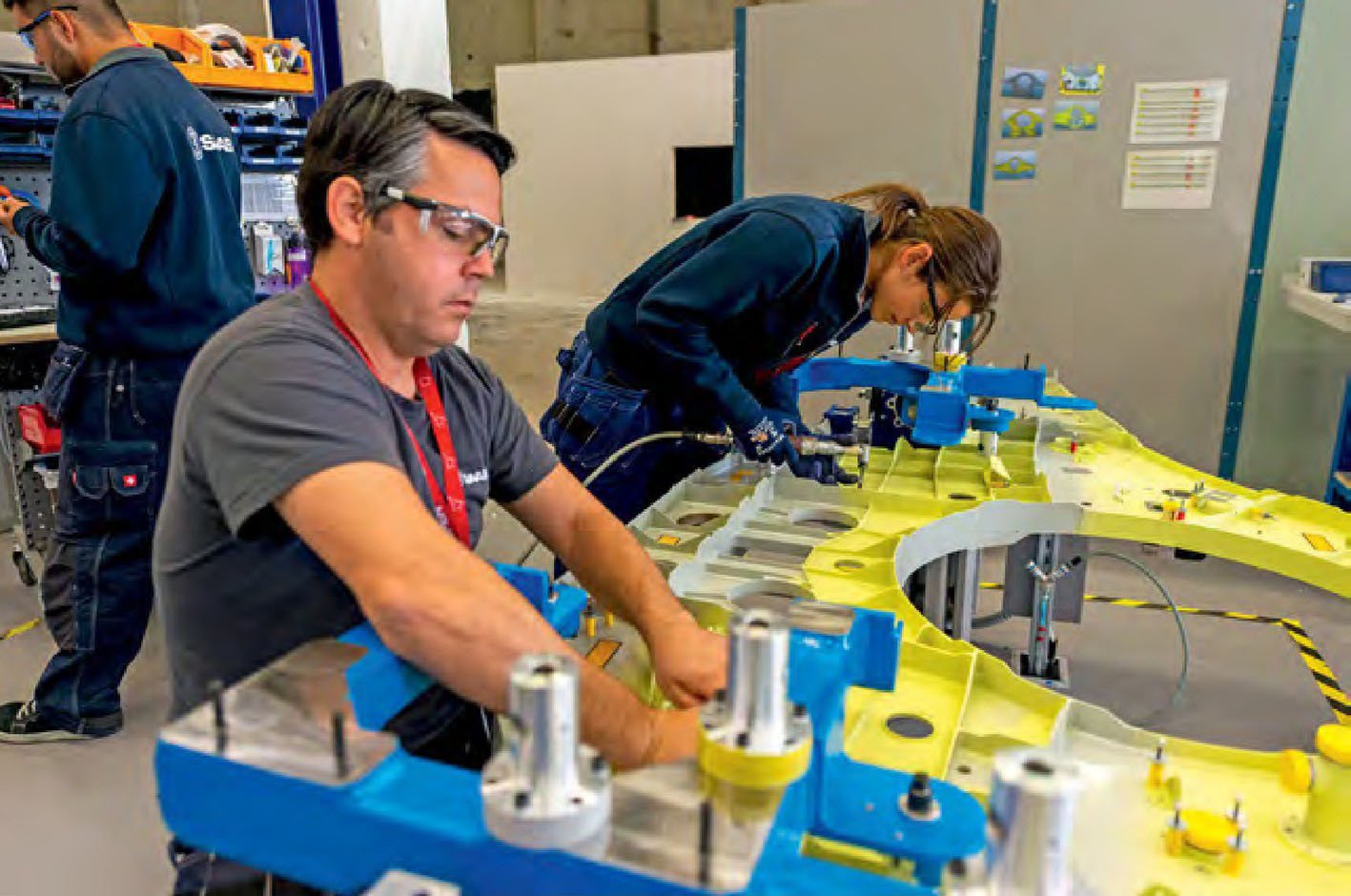 In Linköping Brazilian technicians are working alongside and receiving instruction from Swedish Saab employees during all the phases of production.
João Paulo Moralez

Gripen E to F – at a glance

Brazil is the launch customer for the two-seat Gripen F. The difference between the two aircraft is small. The Gripen F is 15.9m (52.2ft) long — just 0.7m (2.3ft) longer than the Gripen E. It lacks the 27mm Mauser BK27 cannon and the front and rear cockpits operate independently of each other, allowing either single pilot, training or missionised configurations, thanks in part to the new wide area display that both cockpits will feature.

Linköping – the Saab centre of excellence

The assembly line at Linköping is silent. The environment is calm and there is a quiet air of perfection. There are no paper manuals here. In addition to making the process faster and mitigating errors, it allows the operator to analyse each component in three dimensions, zoomingin if necessary and moving it in various directions. The operator also has a digital step-by-step instruction of each production process.

When the Gripen E assembly line reaches maturity, it is estimated that a new customer will have to wait around eight months after signing the contract until the first fighter is delivered. In both Sweden and Brazil the production rate is expected to reach 14 aircraft per year in each country at its peak.