The aviation industry needs to keep a close eye on developments in blockchain technology, says Amit Ganjoo of ANRA Technologies

A few years back I wrote an article about blockchain and its relevance to drones. That article was recently quoted in the US Department of Transportation’s Volpe Center report on its application for use in drones. While there is still a certain amount of industry buzz around blockchain, the hype seems to have settled down as researchers and developers work towards finding practical and realistic applications for it in the aviation sector.

Blockchain provides many benefits over centralised forms of recordkeeping by operating without a single point of failure, supporting complete transparency of data through distributed networks and immutable recordings of actions and consensus.

The distributed nature of the technology introduces adoption challenges. Relying on a large network of nodes, blockchain eliminates a centralised system which requires universal participation from everyone in the domain – a system with multiple stakeholders such as the commercial drone industry needs extensive co-ordination and co-operation. Considering the many layers in blockchain, there are also several different protocols on the market, each built using different algorithms and/or integration methods.

A challenge in the mass adoption of blockchain is its scalability. For example, the speed of transactions using blockchain may not keep pace with high transactional systems due to the size of the blocks in the chain, which can potentially impact scalability. These scalability problems will be further exacerbated at high volumes.

Furthermore, ease of integration into existing systems is a key consideration that may limit the use of this technology.

What are the applications?
Being fully autonomous and remotely operated, reliability can be a key concern for drones in the ecosystem. Policies and protocols of blockchain can add reliability to such a system. Commercial drone applications, such as consumer and business package delivery, tend to rise to the top as prime candidates for leveraging the integrity enhancements that a blockchain can provide.

Blockchain technology is being considered to create a framework to ensure security and identity management for the commercial drone industry. We may be able to consider models using blockchain identifiers that enable flexibility in establishing alternative trust models across heterogeneous devices, access technologies, network domains and communication modes. In addition, blockchain can provide a supporting role in aircraft traffic management, drone conflict management and flight authorisation. 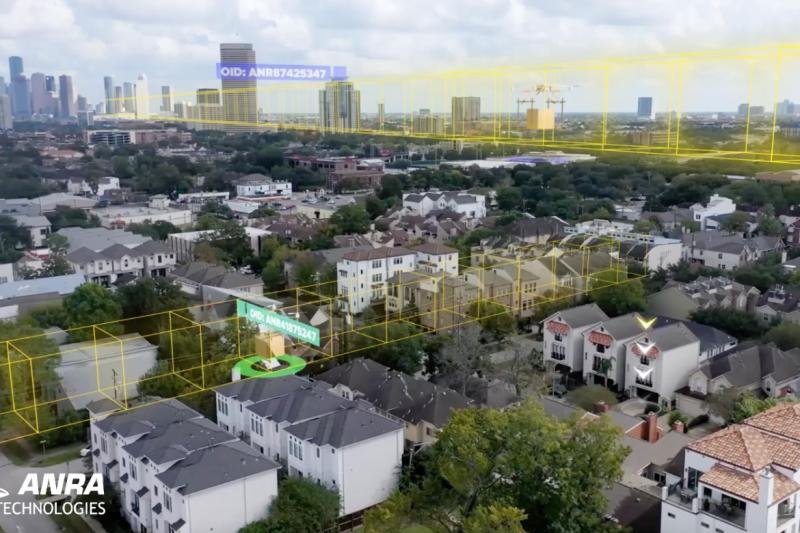 Walmart is considering leveraging blockchain to automate the logistics of delivery drones. For example, as a drone approaches a delivery box, it authenticates itself with a ‘blockchain identifier’, a type of digital numeric or encrypted key. If the code is valid, then the box unlocks, opens and accepts the package. When a package arrives at its destination, its receipt could trigger a notification to be sent to a consumers’ mobile device. A supplier can use a blockchain not only to authenticate identity, but to also track other useful information about a package as it moves through a supply chain.

For a typical package delivery operation, there are a few basic elements that can potentially be handled by blockchain:

All of these data elements have corresponding actors or consumers in the drone ecosystem.

Further reinforcing this technology, IBM was granted a patent to utilise blockchain for drone fleet security. In this case, the data involving drone flights would be stored in the blockchain ledger, enabling air traffic controllers to manage a steadily increasing number of drones. The chain would log each device’s path through time. The parameters for a relevant target drone would be sent to at least one of the computing nodes within the system for validation when a transaction is conducted, generating a new block. This block would then be added to the drone blockchain of the stakeholder.

Supplementary Data Service Providers (SDSP)
The overall goal of UAS traffic management (UTM) is to create a system that does not require constant human monitoring and surveillance but can still ensure the authenticity, safety, security and control of the drones in low-altitude airspace. This system would factor in inputs from external sources such as obstacle, terrain, weather, airspace, command and control (C2) link and performance data to make this value-added processed data available to operators/service providers.

Blockchain technology coupled with artificial intelligence (AI) can enable supplemental data service provider (SDSP) functions such as dynamic traffic routing and route optimisation to enhance the core UTM functions. Blockchain can facilitate these features and be used to enable ‘smart contracts’, to make it possible for drones to act as fully independent economic agents.

Drone identity management
The focus of remote identification is to enable public or private entities interested in a drone flight to detect and report a corresponding identifier number to the authorities. In turn, the authorities would have the tools to investigate complaince without infringing on operator privacy. Blockchain could be used to store an immutable registry of license details, ownership and service history, including software versions for every drone. All the information would be committed to the blockchain through the consensus of members of the UTM network, which could include regulators. In the event of a drone requiring flight clearance, the approval decision would be informed by a rapid search of the blockchain registry. Should it be determined that a drone was conducting any form of illegal activity, it could be recognised and consequently processed in accordance with the law.

A blockchain-based remote identification system would effectively protect information regarding the drone user as well as sensitive information concerning the purpose of the drone missions. While releasing unrestricted information, such as drone surveillance capabilities, the personal information about the drone operators would not be exposed, provided that they were not involved with unauthorised flights.

Vehicle-to-vehicle systems
As the number of drone flights increases globally, the need for a scalable system becomes particularly acute. UTM platforms need to be able to manage thousands of flights, which would be especially challenging in densely populated areas with high demand for drone services.

To increase the efficiency of the traditional UTM, peer-to-peer technologies could be used for exchanging information between drones to create an edge-based local traffic management solution. In such a deployment scenario, blockchain could be used as the basis for deconfliction at a tactical level. Additionally, since there would be no single point of failure, the network would be inherently more resistant to potential attack from bad actors.

Other potential aviation applications
In the aviation industry, the potential for blockchain use is not limited to drone applications. A modular blockchainbased distributive framework known as Hyperledger Fabric can be used to ensure privacy, with the underlying fabric containing channels that operate like mini private blockchains.

NASA has performed extensive research in this area. In a 2019 report, it outlined how each airline could hypothetically have a channel that would limit access to the aircraft data to air traffic control, the airline and the airline’s ground support staff. For each channel, there would be a choice to encrypt the data. Likewise, both private and military aircraft could have their own channels.

This proposed framework would feature certificate authority, smart contract support and higher-bandwidth communication channels for private information that could be used for secure communication to be transferred between any specific aircraft and any particular authorised member.

In all cases, air traffic control would have access to the data and hence could aggregate information from all channels to get a complete picture. This would address the privacy concerns of government and corporate aircraft.

Hyperledger also allows for air traffic systems to have a public key infrastructure (PKI) which would be crucial for maintaining secure identities for communication.

Summary
Blockchain can be leveraged to offer services that could lead to the creation of ‘highways in the sky’ that would ensure safe integration of drones into the national airspace system. From a traffic management perspective, blockchain can enable SDSP capabilities that feed the core UAS traffic management. The use of a blockchain-enabled remote identification system would protect drone user information and any confidential information about the nature and objective of the drone missions. Ultimately, the goal is to develop an independent, self-directed and scalable system that will manage and monitor end-to-end drone operations.

The industry needs to keep a close eye on the evolution of blockchain technology, specifically studying the techniques that can improve transaction speeds. Additional efforts are required to integrate blockchain into relevant segments of the drone industry, not as a magic bullet for UAS traffic management, but as an enabler.

Amit Ganjoo is a licensed private pilot, Part 107 remote pilot, experimental aircraft builder and the founder and CEO of ANRA Technologies. He has extensive experience in commercial and federal spaces, having held positions such a principal architect at Ericsson and working with the US Department of Defense in different capacities in the field of communications and cyber security. With offices in London, Washington DC and New Delhi, ANRA Technologies is an international provider of endto-end drone operations and traffic management solutions for unmanned aircraft operators and airspace managers. It offers intelligent and modular traffic management software capabilities as part of the SmartSkies family for standards-compliant UTM and UAM operations. For organisations that need an enterprise-class drone operations solution, it offers Mission Manager, while for delivery solutions there is SmartSkies Delivery.