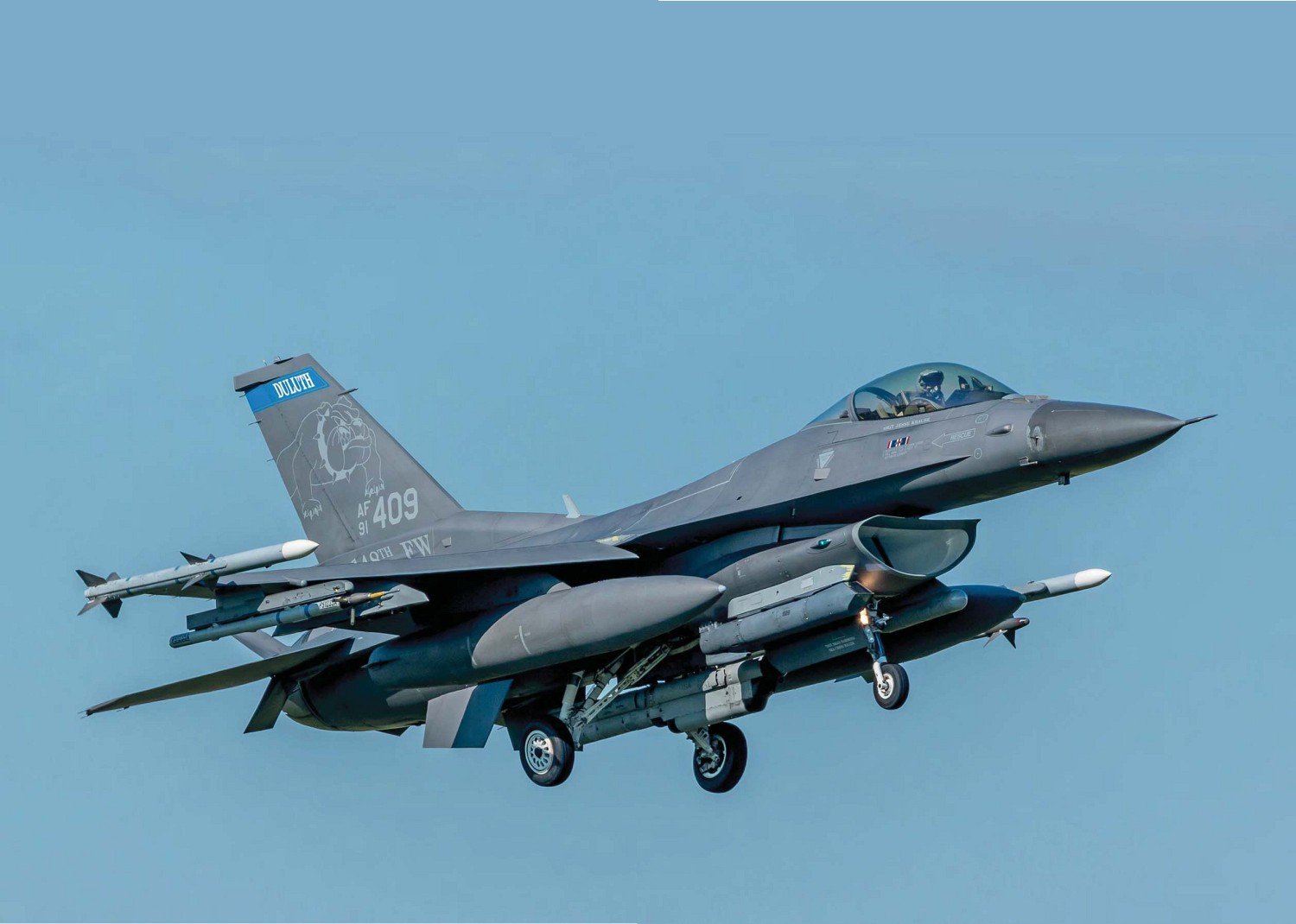 ON THE early morning of March 27 an Atlas Air Boeing 747-400 landed at Groningen Airport in the Netherlands. The aircraft was carrying men and women from Duluth Air National Guard Base in Minnesota marking the start of a two-week deployment to nearby Leeuwarden Air Base, home of exercise Frisian Flag.

This year the F-16C-equipped 179th Fighter Squadron from Duluth, Minnesota was selected to participate in the exercise, but only deployed to Leeuwarden for the two weeks of the exercise and not as part of a much longer European TSP.

Detachment and 179th Fighter Squadron commander, Lieutenant Colonel Paul Thornton explained that under the Air National Guard Partnership for Peace programme, the state of Minnesota has a partnership with Croatia. He said: “We were looking for an exercise in Europe, close to Croatia, to train with our NATO allies and have the opportunity to visit our partner.

During the first weekend of the exercise two of our jets flew to Zagreb, Croatia for a tactical cross talk meeting with their Air Force, and a flight with their MiG-21s.”

As part of preparations for Frisian Flag, Lieutenant Colonel Thornton, who flies part-time for Delta Airlines, visited Leeuwarden for planning meetings in October 2018 and last January to discuss the exercise plan. He took the mission sets home, created a training plan and formulated three main objectives for the deployment with his staff. First, to improve interoperability of the squadron’s own tactics with NATO tactics. Second, to build relationships with the different participating countries and know how to coordinate with European allies. Three, to practise the process of a deployment and learn lessons.

Lieutenant Colonel Thornton said: “Deployment requires a lot of logistics and planning to move our equipment, people and jets. Leeuwarden Air Base is a place where all is set up and is a great first step for us to practise. We would actually be very interested next time in operating from an austere location, something our wing commander is pretty hard set on doing, all in the name of readiness.”

The 148th is one of only two Air National Guard units tasked with the suppression of enemy air defence role dubbed SEAD; the other unit is the Block 52 F-16Cequipped 169th Fighter Wing based at McEntire Air National Guard Station in South Carolina.

The Bulldog’s knowledge of the SEAD role provided exercise planners with an opportunity to integrate the mutual mission sets and learn from the experience. During Frisian Flag, the squadron performed three roles: SEAD, defensive counter air and escort missions. In the first week of the exercise the focus was mainly a SEAD support role.

As part of the total force integration concept, in which the active-duty Air Force, Air Force Reserve and Air National Guard strive for maximum interoperability, about 38% of personnel assigned to the 179th are active-duty including several pilots.

Lieutenant Chaz from Colorado is one of them. He told AIR International that he previously served with Air Combat Command’s 20th Fighter Wing based at Shaw Air Force Base in South Carolina, but is currently assigned to the 179th for a two-year tour. Chaz described his assignment to an Air National Guard unit as advantageous, not least because of the level of experience and knowledge within all ranks of the unit. Frisian Flag was his first overseas large force exercise, which he described as a wonderful experience.

Dark grey metallic shades of the Have Glass V paint illuminated by the spring sunshine at Leeuwarden.
Ludo Mennes

All ten 179th F-16s at Leeuwarden were painted in the latest Have Glass V paint; an evolution of the earlier Have Glass two-tone grey paint. The 5G paint is made of ferromagnetic particles and dielectric polymer, and is reckoned to reduce the aircraft’s radar cross section and make it less detectable to radar. Shooting AGM-88 HARM missiles at surface-to-air missile batteries is a risky business; it’s part of the SEAD mission set and likely the primary reason for its application on the jets.

AGM-88 is the US-developed high-speed anti-radiation missile (HARM) and one of the primary weapons used by US Air Force F-16s tasked with the SEAD and destruction of enemy air defences dubbed DEAD.

Targeting an AGM-88 is achieved with a small pod mounted on the left side hard point on the aircraft’s air inlet. That pod houses and ASQ-213 HARM Targeting System comprising a very sensitive receiver capable of geo-locating hostile surface-to-air missile systems and passing the information to the cockpit displays and the missiles. Geo-location is however only one requirement for splatting a surface-to-air missile battery, target identification and precise weapon guidance are also key. This requires an AAQ-33 Sniper targeting pod carried on the right side air inlet hard point which enables both target identification and precise weapon guidance from standoff ranges.

The AGM-88 HARM is a big missile that’s designed to home in on electromagnetic transmissions emitted by surface-to-air radar systems. Block 50 and Block 52 F-16Cs are equipped with avionics to support the AGM-88 and a launcher interface computer, providing a full autonomous employment capability. Bulldog F-16s did not carry HARM missiles during Frisian Flag, but the capability was simulated using training modes in the ASQ-213.

Discussing the SEAD mission Lieutenant Colonel Thornton explained that for regular missions an F-16 normally flies with a weapon load out comprising two AIM-9 Sidewinder, two AIM-120 AMRAAM and two AGM-88 HARM missiles. He said: “With the current improved geo-location systems on board, the aircraft occasionally also carries bombs. We are not only suppressing threats, we can actually kill the threat, which I call opportunistic destructive SEAD. We have the opportunity to geo-locate a threat and with a bomb on board we can destroy it. If such an opportunity presents itself, great, if not we just keep suppressing”.

Lieutenant Colonel Thornton was glad his unit was participating in Frisian Flag. As an active-duty pilot he participated in Exercise Red Flag at Nellis and its sister exercise in Alaska at different times and noted the size of Frisian Flag is smaller, but the feel of the exercise is very similar. He said: “Although we do not see scenarios of 60 versus 60 aircraft here, the compressed timeframes for mission planning makes it a real challenge. Besides, here we see multiple nations with different languages and procedures which require a lot of flexibility. We are able to advise our partners about our core mission task SEAD, which is great. Being in the Netherlands is all about building relationships and symbolically showing Europe that we are with you no matter what.”