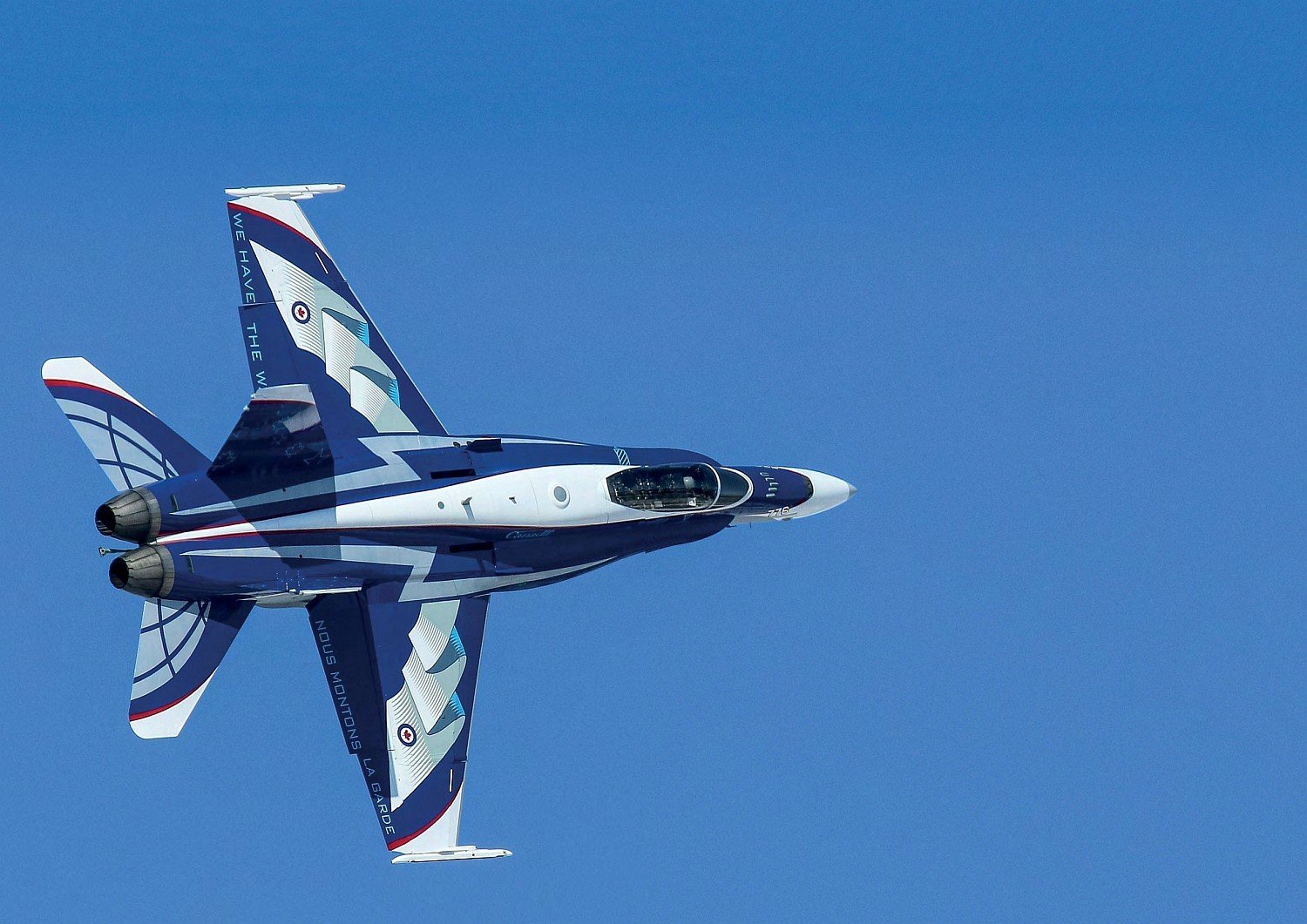 Jeff Chester was sitting at his work desk when the phone rang. Nothing unusual about that. The caller was one of Jeff’s colleagues asking him if he’d be interested in designing a paint scheme for a CF-18 Hornet fighter destined for the demo team of 2018. As well as being a professional artist, Jeff is also a Class A (part-time) reservist serving with the 1 Canadian Air Division Headquarters in Winnipeg, Manitoba, Canada. The job represented big shoes to fill. Over the years, graphic designer Jim Belliveau had been responsible for various CF-18 demo jet paint schemes as the graphic designer for 410 Tactical Fighter Squadron based at 4 Wing Cold Lake, Alberta.

Jeff Chester said: “It was always Jim’s job to do that, but he recently retired. The public affairs department here at 1 CAD was looking for someone to fill Jim’s spot. Major Jen Jones attended one of my art shows last summer and thought I might be able to fill the spot. When Jen asked me to do it, my initial thought was how far outside my lane of expertise the job would be: I’m an oil painter usually doing figurative work and still life, whereas this job is more like painting a gigantic sculpture, so very new for me.

“Luckily, we encouraged Jim to come back as a consultant, so he was instrumental in helping me develop my design and advising me of all the places on the aeroplane that cannot be painted, so the final design would make sense from a practical perspective.” This shot shows how deceptive the Hornet’s mould line is, especially with a fake canopy painted on the underside.

Jeff explained how he started by using pencil and paper to come up with designs based on his ideas, working through 60 iterations using computer design software before a final shortlist was reached: a fairly simple process, but one that took a lot of effort to achieve.

The final design was then turned into vector drawings comprising points and lines that can be scaled up to fit the aircraft’s size using computer illustration software. Once the drawings were received by Jim and a team of eight painters assigned to 1 Aircraft Maintenance Squadron at Cold Lake, they were enlarged and printed into stencils for application to the aircraft. Design

This year’s design commemorates the 60th anniversary of the North American Aerospace Defense Command (NORAD), a bi-national organisation between Canada and the United States, tasked with aerospace warning and aerospace control for North America.

Red, white and a striking dark blue were chosen to signify the colours of the Canadian and US flags. The globe motif applied to the horizontal stabilisers represents the overwatch of North American airspace provided by NORAD. Two white lightning bolts extend from the leading-edge extensions all the way back to the tails are a replication of those in the NORAD emblem.

Outer sides of the rudders feature a sword painted over the strip lights, which glow to give an illuminated sabre effect during twilight shows. Half a maple leaf appears on the left side of the sword and half a star on the right side, used to signify the Canadian-American NORAD partnership; the inner sides also feature an arrangement of maple leaves and stars. The title ‘NORAD’ features on the tip of the vertical stabilisers.

The flaps display the same legend in English and French: ‘We have the watch’ on the left and ‘Nous Montons La Garde’ on the right.

Explaining the thought processes behind the design, Jeff said: “For the top of the wing, I initially chose wings of the ptarmigan bird to symbolise the importance of the Arctic to the NORAD mission. They were full-on bird wings, which then morphed into the ribbon design which retained the wing-like look and at the same time also referred to the shape of the Northern Lights and a sweep across a radar screen [recognition of the different controllers, despatchers, weapon controllers and a multitude of personnel involved with monitoring the airspace]. The actual design is a combination of the three elements. The ribbons contain coloured fingers symbolising feathers tying the design back in to the white wings hugging the globe on the NORAD logo.

Jeff continued: “The white stripe extending around the cockpit to the aft of the aircraft follows the fuselage form, while the two lightning bolts bow outward to avoid the Lex fences, so the shape of the aeroplane has an impact on the design itself.”

To ensure a timely completion, a paint plan was developed to manage main and secondary work done concurrently by the crew each day, to minimise work time and material use. While one crew laid out and masked the graphic elements topside, another crew applied underside stencils or re-masked an area for the late afternoon paint session. Every demo jet is a one-off, and a paint plan has to be developed each time. Upon completion of this year’s paint scheme, the paint crew had used over 120 rolls of tape, 15 gallons (57 litres) of paint, 330 feet (100m) of computer-cut stencils and several rolls of masking paper and film.

The design took one month to apply, a process complicated by curing time and the logistics of applying the first topside blue base, which took up an entire week. The dark blue had to be done in two, one-day sessions to allow the crew to walk on areas already painted; the second coat was applied over the cured and scuffed first coat. The crew had to allow almost four days between the first and second coat.

Stepping back a stage, the sign-off for the design was made by the commander of the Royal Canadian Air Force, at the time, Lieutenant-General Michael Hood, after the 1 CAD commander, Major General Christian Drouin, had selected just one from a group of four options presented to him by a group of 1 CAD personnel including Jeff, Jim, the special events office and public affairs.

Jeff reckons the eight-person paint crew at Cold Lake would never have been satisfied with anything less than an outstanding finish. They did a great job applying high-quality paintwork to a very stylish design. 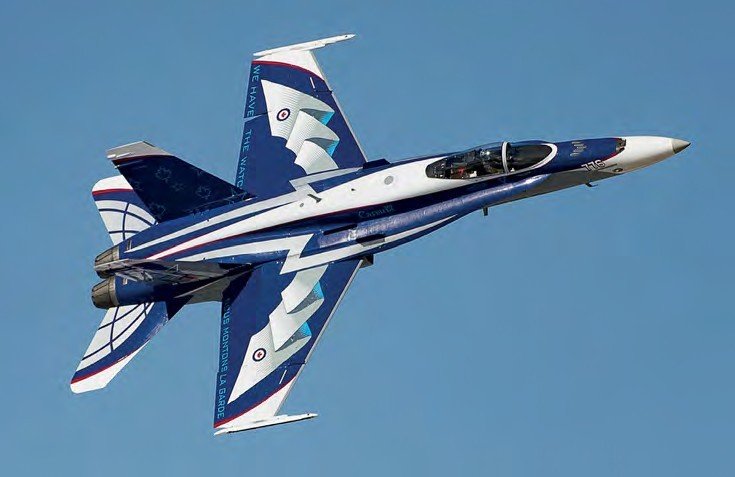 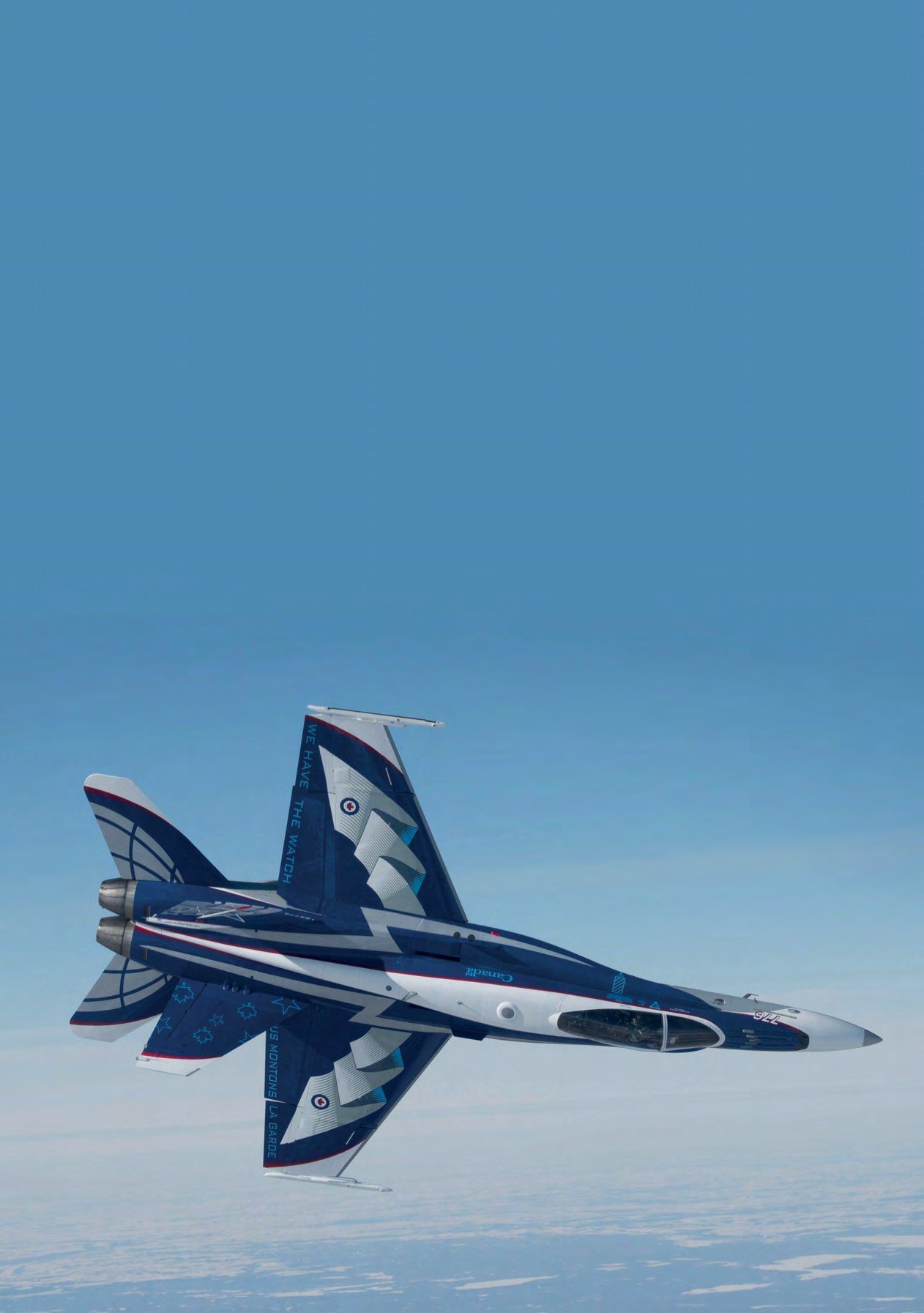 More details of the design, including the titles applied to the flaps, and the maple leaves and stars on the inner face of the vertical stabiliser.

None of the safety pilots is cleared to fly the demo; that’s the job of Captain Porteous, with backup to him provided by the previous year’s demo pilot.

Explaining the role of the safety pilots, Captain Porteous told AIR International: “Their primary role is to maintain a constant link with myself over the radio from their position on the ground. He is my safety backup, so every time I have a vertical transition or a vertical manoeuvre, I speak with them to make sure that my gates, both speed and altitude, are met prior to the transition. The safety pilot also provides my situation awareness to anything that’s happening in the show box or on the ground that I’m not aware of. The safety pilot can also relay the most pertinent information to me from the show boss over our own radio channel.” 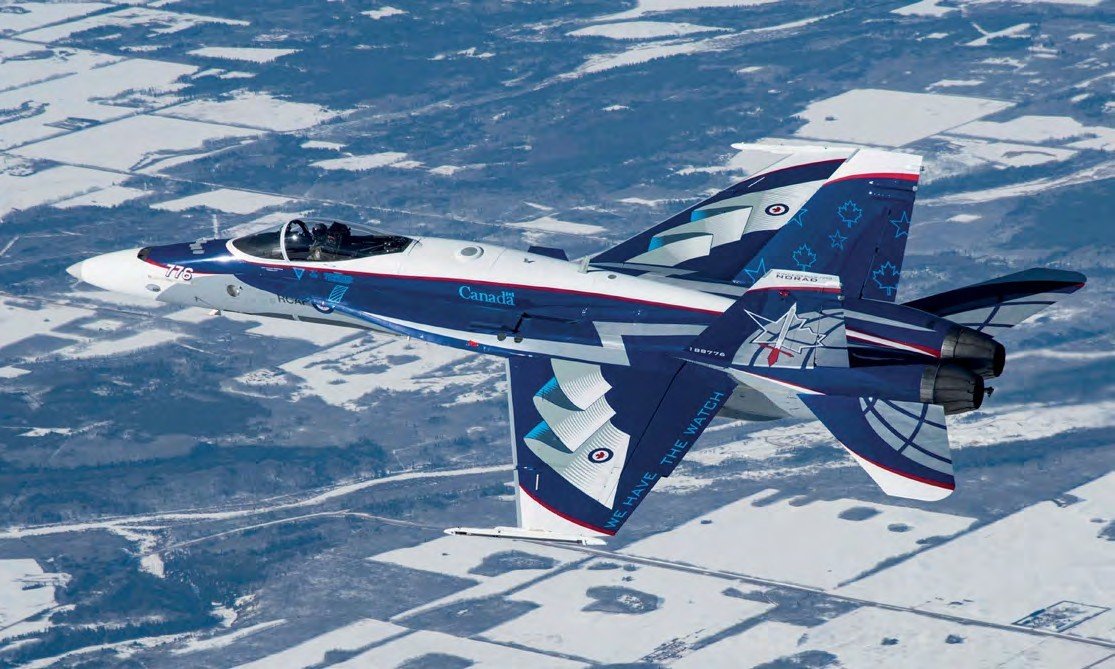 Even with a bright paint scheme, CF-18A 188776 blends in well to the backdrop of a snowy Alberta.

Notification of selection for the next season’s demo pilot happens in the autumn of each year. The pilot and the team attend a conference staged by the international council of air shows where they first find out about all of the shows for the forthcoming season. Over the winter months, Captain Porteous started an intensive training programme starting with instruction in a simulator on how to fly the routine with last year’s demo pilot, Captain Matthew Kutryk.

Like all new demo pilots, Captain Porteous was able to design a display routine using approved manoeuvres contained in the Royal Canadian Air Force’s fighter demonstration manual. He said: “We practise the routine in the sim over and over using a building block approach, starting at a high altitude, initially 2,000ft, and making our way down to the terminal altitude of 300ft.

“I spend a lot time in the simulator practising, making sure I have the routine memorised and to work on its finesse aspects.

The flying portion of the work-up has its own syllabus. This starts with being shown the routine by last year’s demo pilot while flying in the back seat of a two seat CF-18B. We did a few of those rides before I flew the first practice demo routine with Captain Kutryk in the aft cockpit as safety monitor. We then followed the same step-down approach taken in the simulator, initially starting at 2,000ft. Once I was safe at that level, I was cleared solo and then made my way down to 1,000, 750, 500 and 300ft. Every four or five flights throughout that process, Captain Kutryk would fly in the back seat to clear me down to the next level, ultimately 500ft. Then I cleared myself down to 300ft, based on my own level of comfort with flying the routine.” 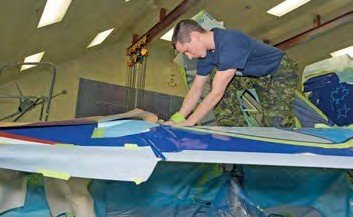 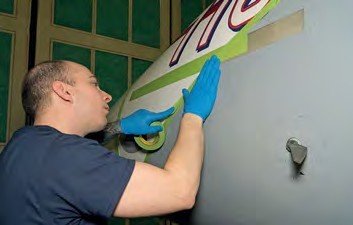 An airman assigned to 1 Air Maintenance Squadron paint team applies masking tape to the nose of the demo jet during its painting in early March.
OS Justin Spinello/4 Wing Imaging 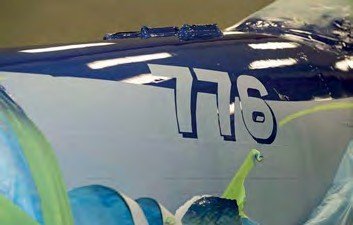 During the flying work-up, Captain Porteous flew twice a day, every day, for almost 20 days, not at Cold Lake but from 19 Wing Comox, British Columbia. He rated the work-up process very highly, citing the differences between flying the demo and normal flight operations on a gun squadron and the need to safely transition: “Every time I fly the routine, I notice something that can be done better, so it’s nice to have the personal challenge of trying to perfect it each time.”

Once the spring training session at Comox was finished, Captain Porteous had to fly an acceptance show for the commander of the 1 CAD, Major General Christian Drouin, who signed off the routine and command of the demo team for the summer. A second acceptance flight followed, this time for a dedicated Federal Aviation Administration representative in the United States. Both flights ensure the routine is deemed safe as an aerobatic performer by the Canadian and US authorities.

This year’s routine is slightly different from last year’s, and a shorter version will be flown at displays in the UK to meet UK regulations. Two CF-18s are due to attend Royal Naval Air Station Yeovilton’s Air Day and the Royal International Air Tattoo 2018 at RAF Fairford in July. Captain Porteous said the team is incredibly honoured to be invited to participate in the two UK shows, and hinted at a surprise within the ground portion of his display at Fairford that gives a nod to the Royal Air Force in its 100th anniversary year.