Although aesthetically not as striking as the J-20, the Xi’an Y-20 is – at least for a military transport – quite a handsome design; it is nicknamed the ‘chubby girl’. Following its maiden fight on January 26, 2013, the Y-20 accomplished its fight testing in an astonishingly short time (for a Chinese aircraft) and entered service within the People’s Liberation Army Air Force (PLAAF) in June 2016.

Officially, the Y-20 is named the Kunpeng after a giant mythological bird. Not only is it by far the largest indigenous Chinese aircraft, but it is also China’s first domestically developed heavy transport aircraft. As such, and similar to the J-20, the Y-20 represents both a giant leap in China’s goal of building true strategic airpower and an important milestone for the Chinese aviation industry.

The initiation of the Y-20’s development was closely connected with China’s acquisition of Ilyushin Il-76MD transports in the early 1990s. Between 1991 and 1996, 14 Il-76MDs were delivered by the Chkalov Tashkent Aircraft Production Company to China and in parallel the first studies were initiated into developing an indigenous strategic military transport. Several more Il-76MDs were planned to be purchased, as well as Il-78 tankers, but this deal never materialised due to political issues, and consequently the design of an indigenous 200-tonne military aircraft became a highpriority project.

Naturally, the development of such a complex aircraft was a demanding effort for the Chinese aviation industry. The full background is not entirely public. However, in early April 2006, Chinese representatives approached the Ukrainian company ANTK Antonov – by then involved as a consultant in the development of the Y-9 transport and ARJ-21 airliner – to assist in the development. The true extent of Antonov’s involvement in what became the Y-20 was much more than consultation. It contributed to the aircraft’s development, reportedly with a jet-powered derivative of its An-70. On the Chinese side, the Xi’an Aircraft Company (XAC) was given responsibility for the project and the design team was led by Chief Designer Tang Changhong at XAC’s design Institute 603.

According to reports, in the following three years the design was revised due to adjusted requirements from the PLAAF for an increased maximum take-off weight and dramatically higher payload. The whole project switched to a substantially larger and heavier proposal with a take-off weight of 230,000kg (507,063lb) and a maximum payload of 60,000kg (132,277lb). In this form, the design received its Y-20 designation in late 2009.

At around the same time the first concept drawings appeared on the Chinese internet, stating the prototypes and early serial aircraft were planned to be powered by Russian D-30KP-2 engines, with later production versions using a new indigenous highbypass turbofan called the WS-20 Huanghe. A maiden fight at around the turn of the year from 2012 to 2013 was mentioned. In the meantime, China acquired a few more used Il-76MD and Il-76TDs as a stopgap measure until the Y-20 entered service.

On Christmas Eve 2012, a small, grainy image appeared on the Chinese internet of the first prototype, s/n 20001, undertaking taxi tests (which began on December 21, 2012) at the Chinese Flight Test Establishment (CFTE) airfield at Xi’an- Yanliang. The long-awaited first flight was successfully completed on January 26, 2013, marking a major achievement for the Chinese aviation industry.

1 One of the first Y-20s delivered to the PLAAF. Reports suggest the four aircraft in service are the final prototype and three LRIP aircraft.

A lot happened in the three-and-a-half years between the Y-20’s maiden flight and its service entry in June 2016. Aircraft 20001 was soon renumbered 781 and received a dark charcoal colour scheme. In December 2013, the second prototype, 783, flew for the first time, followed by additional aircraft (785 and 788) during 2015. The final prototype, 789, already close to low-rate initial production (LRIP) standard, flew in February 2016.

Before then, in autumn 2015, press releases reported that a pulse assembly line had been established at XAC and the factory was ready for production. Late in 2015 XAC’s parent company, AVIC, officially announced the research and development (R&D) phase of the Y-20 programme was complete, prompting the members of web forums about Chinese aviation to begin discussing whether the type would soon enter service. Between March and May 2016, several reports in the Chinese media were surprisingly open in their discussion of the Y-20 and the project’s progress. Some experts stated the Y-20 would be put into military service in mid-2016, openly admitting the transport would use imported engines – D-30KP2s – as an interim measure.

There were no significant hold-ups during development, manufacturing and testing. As such, the R&D phase was completed and the type received its certification. The Chinese media even openly discussed the PLAAF’s requirement for the airlifter, erroneously reported in some Western media as 1,000 aircraft. According to a military expert interviewed by the People’s Daily Online, no more than 100 Y-20s will be deployed by the PLAAF in the future. These statements were a prelude to the official service introduction, which began with a handover on June 15, 2016.

A first aircraft, serial number11051, was delivered in a ceremony at XAC’s facility at Xi’an-Yanliang and later transferred to Chengdu-Qionglai. A second aircraft, 11052, was spotted a day later. The first operational unit is the 12th Regiment of the 4th Transport Division at Chengdu-Qionglai, previously a Xi’an Y-7 operator. On July 7, the two Kunpengs were officially introduced to the PLAAF; in service this type is officially designated Y-20A. Two more as yet unnumbered aircraft made an appearance prior to Airshow China at Zhuhai in November 2016 and were handed over soon after the show. The latest reports say these four aircraft are in fact the final prototype, 789, and three LRIP aircraft.

3 This year is expected to see the maiden flight of a Y-20 fitted with the WS-20 engine, pictured on the inner port pylon on this Il-76LL testbed. 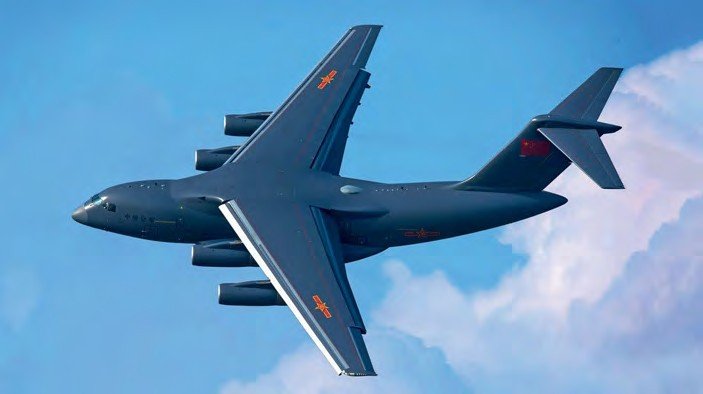 4 The first operational Y-20 unit is the 12th Regiment of the 4th Transport Division at Chengdu-Qionglai.

What is ‘In Service’?

It may come as a surprise that the Y-20 reached series production after only three years of testing, especially as the Chinese lack any prior experience in the development, testing and certification of an aircraft of this size. Comparable modern transports, such as the Boeing C-17, the Airbus Defence and Space A400M and the Kawasaki C-2, have generally required three to five years of testing.

However, the Chinese understanding of ‘in service’ is in no way comparable to a Western initial operating capability. By Chinese standards, an aircraft is considered in use when it has obtained its approval/ certification and the first examples have been handed over. Therefore, the milestone event on June 15, 2016 was above all a signal, perhaps more important in a political context. True operational testing will continue for some time longer.

Operational use of the first Y-20s will be quite limited, but will likely include testing in different scenarios and mission profiles to gain further experience. This will certainly involve setbacks and maybe even delays, but this is standard Chinese practice.

Ultimately, the Y-20B with the WS-20 Huanghe engines will emerge. A first glimpse of how this definitive version will look was presented at Airshow China in 2014, with the showing of a civil version called the Y-20-F100. In contrast to the current Y-20, this version features a slightly stretched fuselage.

Progress on the WS-20 engine is reported to be proceeding well and the maiden flight of a Y-20 with this engine is expected this year. Testing of the WS-20 has continued at the CFTE using a converted Il-76LL engine test bed in parallel to the Y-20’s service introduction and LRIP.

Probably only with the WS-20 engine will the Y-20 finally fulfil its projected performance. Consequently, China’s giant bird has a long, bumpy and surely interesting road ahead of it.