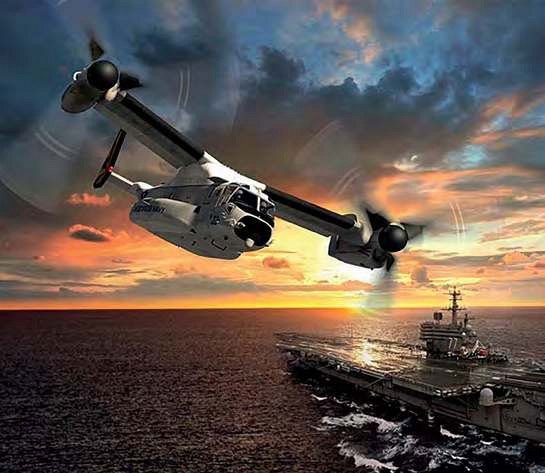 An artist’s impression of a CMV-22B carrier onboard delivery variant of the Osprey tiltrotor, the first of which is bound for San Diego’s Naval Air Station North Island. Bell-Boeing

The Chief of Naval Operations, Admiral John Richardson has set a date for the establishment of a new carrieronboard- delivery (COD) squadron to operate the CMV-22B variant of the Osprey tiltrotor aircraft. A CMV-22B training group also will be established.

Fleet Logistics Multi-Mission Squadron 30 (VRM-30) will be established at Naval Air Station North Island, California, on October 1, 2018, according to an internal Navy directive. When equipped with CMV-22Bs, VRM- 30 will deploy detachments of CVM- 22Bs with each carrier air wing from the West Coast and Japan, succeeding the C-2A Greyhound COD aircraft of Fleet Logistics Support Squadron 30 (VRC-30).

Currently, a detachment of Commander, Airborne Command and Control and Logistics Wing, the type wing for the two VRC squadrons, as well as the E-2D squadrons, supervises the Navy’s V-22 training at New River. Eventually, a new type wing will be established at North Island as the reporting command for the two planned VRM squadrons, VRM-30 and VRM-40, the latter squadron being planned to replace VRC-40, the C-2A squadron based at Norfolk, Virginia.

Also, a third squadron VRM-50, will eventually be established at North Island as the fleet replacement squadron for the CMV-22B community when the training shifts from New River. Rick Burgess