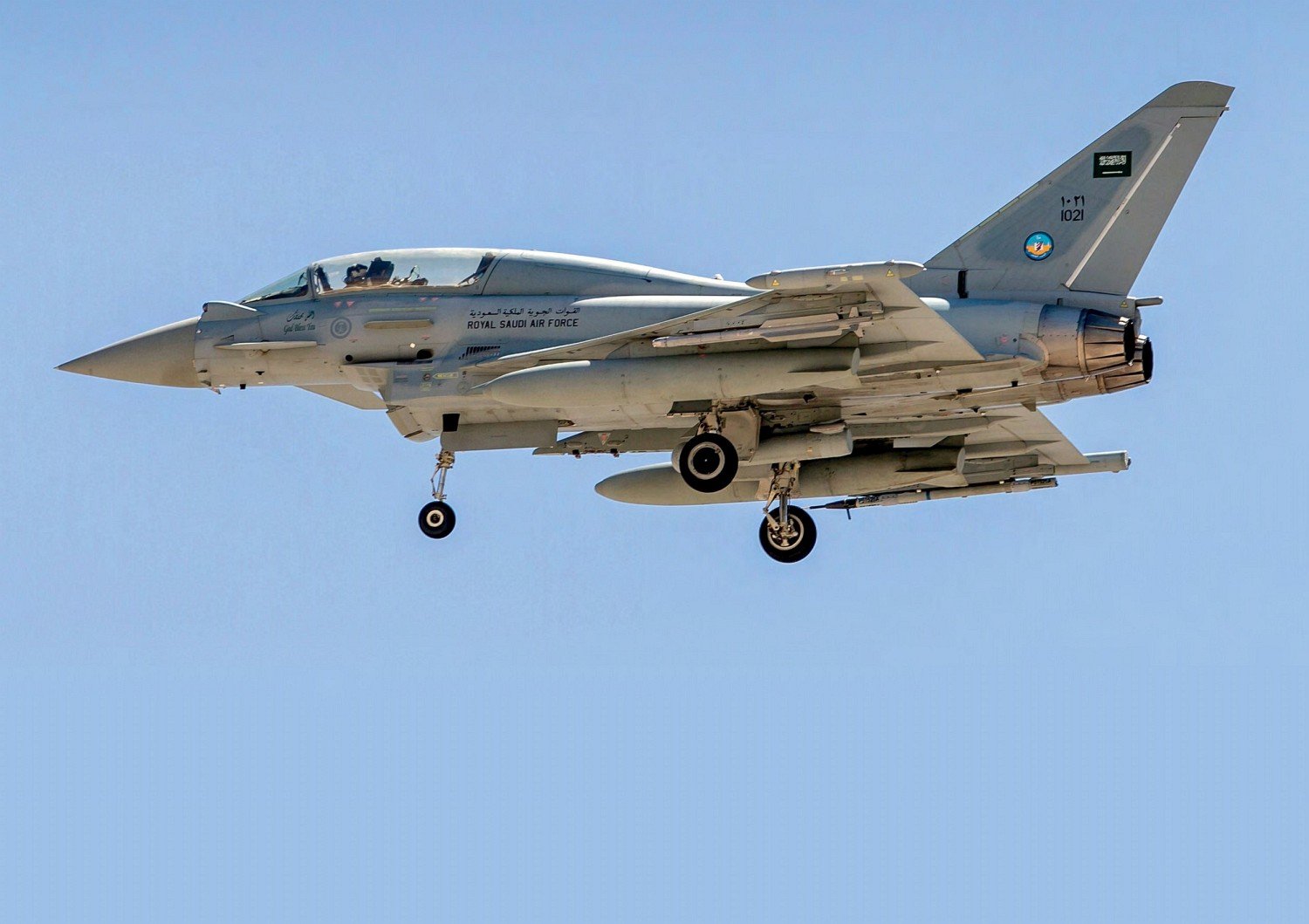 Significant? Yes. It was the first appearance by Saudi Typhoons, and is also believed to have been the first participation by Tranche 3 standard aircraft.

The RSAF has driven the pace of development within the Typhoon programme, leveraging its generous funding. As such, Saudi Arabia was the first operator to gain an air-to-ground capability with Tranche 2 standard aircraft, start gunnery training, gain a night-time aerial refuelling clearance and use Tranche 3 standard aircraft in combat.

Once upon a time, Saudi Arabia was an inward-looking nation with a domestic defence posture. Today, equipped with significant offensive capabilities aimed at deterring direct threats to the Kingdom, Saudi Arabia has increasingly embraced a more outward-looking and less parochial foreign policy. The Gulf nation now supports, joins and even leads international partnerships against regional threats with an air force adapted to meet the new requirements, and by embracing coalition and deployed operations.

The RSAF Typhoon force trained hard to prepare itself for these roles and responsibilities. In September 2013, the RSAF deployed four Typhoons (accompanied by four Tornados) to RAF Coningsby, Lincolnshire, to participate in a joint training exercise with the Royal Air Force, and in March 2017, four Typhoons and four F-15s participated in joint training with the Sudanese Air Force.

By then, however, the Saudi Typhoon force had plenty of real-world experience operating within multinational coalition force packages.

When the United States commenced what it called expanded air strikes against ISIS targets in Syria on September 22, 2014, Saudi Arabia was quick to join the effort. Typhoons assigned to the 10th Squadron based at Taif Air Base were soon in action, designating and striking targets using Thales Damocles targeting pods and Paveway II laser-guided bombs.

After an initial strike phase using Paveway IIs, the 10th Squadron undertook follow-up training with the Paveway IV precision-guided bomb. The dual mode Paveway IV’s optional GPS guidance provides a useful capability against targets obscured by smoke, dust or cloud, all of which can prevent the use of laser-guided weapons. Paveway IV offers better tailoring of effect, so by adjusting fusing, attack direction and impact angles the effects of blast and fragmentation can be reduced, thereby limiting collateral damage.

Despite its real-world operational experience, participation in Red Flag remains highly prized by and valuable to the RSAF. Even the relatively limited and asymmetric war in Yemen has exposed RSAF aircraft to some advanced threat systems. Some sources suggest that two Typhoons have been lost in action, one on September 13, 2017, and, according to Yemen’s al-Masirah television network, another on October 27, 2017. Pilot Lieutenant Colonel Muhanna Al-Baiz was killed in the first incident, which was officially put down to technical reasons. The aircraft crashed into a mountain in Yemen’s Al Wade’a district.

Lt Col Khalid al-Yousef, commander of the RSAF Red Flag deployment, noted the Royal Saudi Air Force was “the only air force from the Middle East to participate for the sixth time in a row in Red and Green Flag exercises” and proudly said this showed the RSAF was one of the best air force systems in the Middle East and worldwide.

Saudi’s Nellis deployment was mainly manned by 10 Squadron personnel, though the 11 Typhoons involved wore the markings of the 10th, 3rd and 80th Squadrons. The 80th Squadron was once expected to stand up at the air base at King Khalid Military City, which was planned to be the RSAF’s second Typhoon base. As far as can be ascertained, the 80th Squadron has not yet stood up and the RSAF’s Typhoons are pooled at Taif, used by the frontline 10th Squadron, and by the 3rd Squadron, which functions as a conversion unit, as well as having some frontline responsibilities. The stand-up of a second base is now expected to wait for the delivery of a possible further batch of Typhoons.

Transiting through Moron de la Frontera Air Base on August 1, 2017, Spain’s first Eurofighter base, the trail involved what one Saudi pilot described as “difficult weather conditions”, especially for the newly graduated pilots flying some of the jets.

As is usual for RSAF detachments to Nellis, the 2017 contingent had use of an entire hotel, in this case 289 rooms in the World Tower of the SLS Hotel complex on the Las Vegas strip, 12 miles (19km) from Nellis. Needless to say, the facility’s bars and pools were closed to the public for the duration of the exercise.

With 15,000 square miles (38,850km2) of airspace and 4,700 square miles (12,100km2) of restricted land, the Nevada Test and Training Range (NTTR) offers a massive area for realistic air combat and air-to-ground training, including inert and live weapons. More than 75% of all live munitions used by US Air Force squadrons for training are dropped on the NTTR.

Major Atallah bin Humaid Al-Osaimi said the exercise simulated movement of surface forces, and provided excellent training in joint operations in a range of scenarios that allowed the Saudi Typhoon pilots to practise swing-role capabilities on most missions. 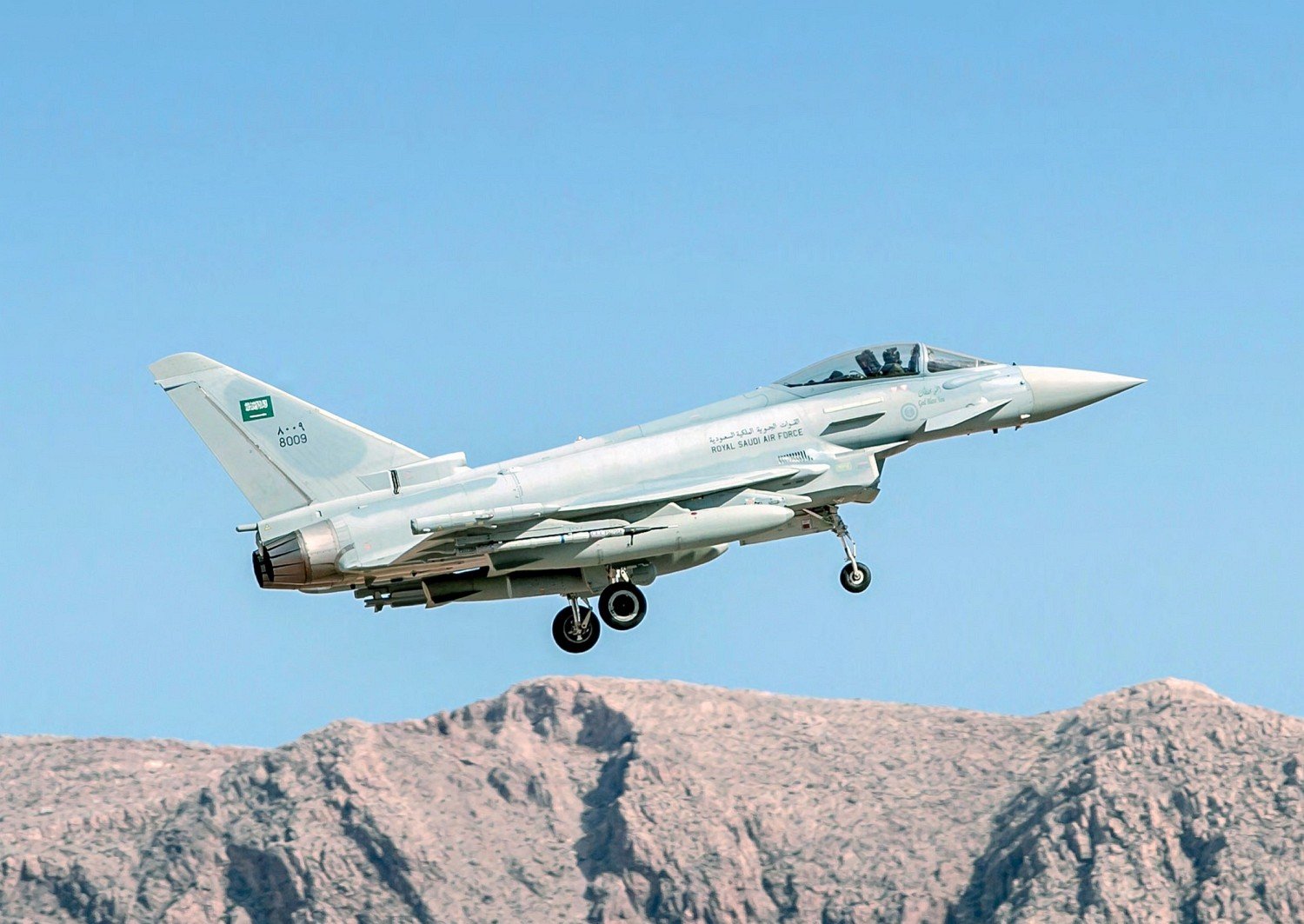 Saudi Typhoons flew with two underwing fuel tanks, an IRIS-T acquisition round under the port wing, and a range instrumentation pod under the starboard wing. Several aircraft were photographed carrying a Damocles laser designation pod loaded on the centreline station and, for some Green Flag sorties, loaded with inert Paveway IVs. Interestingly, the Saudi pilots did not appear to be flying with the Typhoon’s helmet-mounted sighting system, dubbed the Striker head equipment assembly.

Lieutenant Abdulaziz Omran is a first-tour pilot on the 10th Squadron who has been flying Typhoons for two years with about 500 hours on type. Whereas most Saudi Typhoon pilots have converted from the F-15, Lieutenant Omran converted to the aircraft straight from flying training on the Hawk and expressed his pride to be flying what he described as the “most advanced fighter in the region”.

Omran, who has flown the aircraft on operations said: “Typhoon had proved ideally suited for the Yemen mission, which requires an aircraft with powerful engines to carry a heavy load of weapons and fuel, and to operate from relatively short runways.”

Lt Omran praised the high degree of confidence the aircraft inspires. He said: “The accuracy is especially impressive; the Typhoon will never let you down. It is very, very safe, is extremely reliable and enjoys a high availability rate, despite what is a very high tempo of operations.

Lt Omran’s 500-plus hours of flying Typhoon has been full of variety, since the aircraft is as capable at night or in adverse weather as it is in daylight. He flew seven swing-role missions during Red Flag, describing them as very good experience in which his squadron did very well, with very good serviceability and no problems.

A VIP visit on the final day saw a number of dignitaries reinforcing the young pilot’s message, including Major General Muhammad Al-Otaibi, commander of the Royal Saudi Air Force, and Prince Khalid Bin Salman, the Saudi ambassador to the United States and himself an F-15S pilot who took part in strikes against ISIS in 2014. The prince spoke about the calibre, professionalism and operational efficiency of the Saudi pilots as they defended the “security and stability” of their homeland.

Among the other participants of Red Flag 17-4 were F-15SGs of the Republic of Singapore Air Force. Several aircraft from the 428th Fighter Squadron (part of the Peace Carvin V Training detachment assigned to the 366th Fighter Wing based at Mountain Home Air Force Base, Idaho) participated in the exercise. Participation by Singaporean F-15SGs gave the Saudis a foretaste of what they might be operating with when Saudi Arabia’s new F-15SAs become fully operational. Red Flag also provided the Saudi Typhoon pilots with an opportunity to operate alongside fifth-generation F-22s of the 94th FS at Langley. 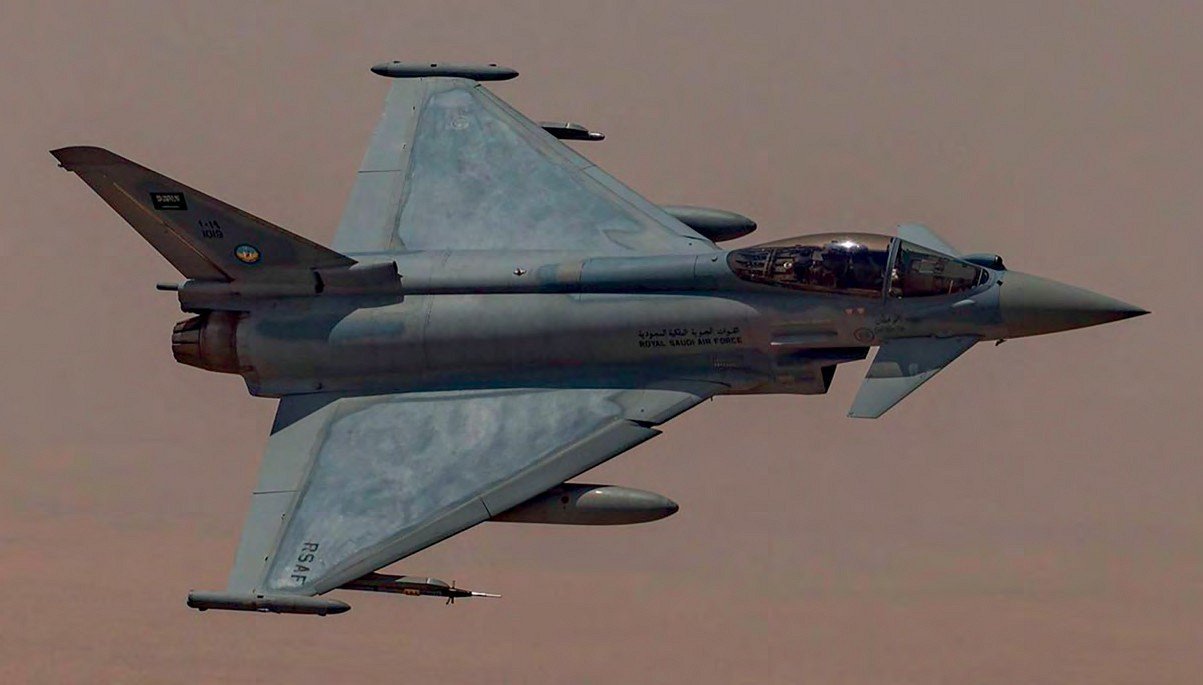 The Saudi Typhoons returned home after the exercise, flying via Joint Base McGuire- Dix-Lakehurst, New Jersey, and the Spanish Eurofighter base at Moron de la Frontera.

Saudi pilots welcomed the opportunity to compare experiences with their Spanish counterparts based at Moron, and Lt Omran expressed some pride in Saudi Typhoon capabilities: “We have been to Spain and found we are some steps ahead. Mission data is a key differentiator for Typhoon and ours is very reliable.”

Like all modern fighter jets, mission data is of crucial importance to Typhoon and makes a significant difference to the performance of the defensive aids subsystem (DASS), radar and electronic warfare systems. The Royal Air Force has undertaken major efforts to ensure its mission data is updated and improved frequently, and as a consequence many rate the combat effectiveness of RAF Typhoons as being higher than that of some other nations. 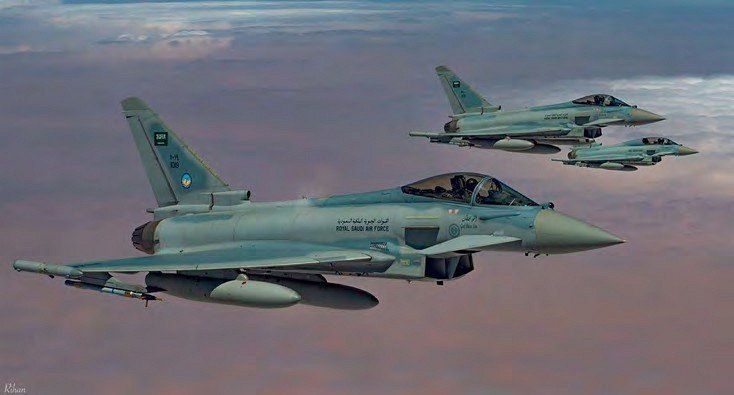 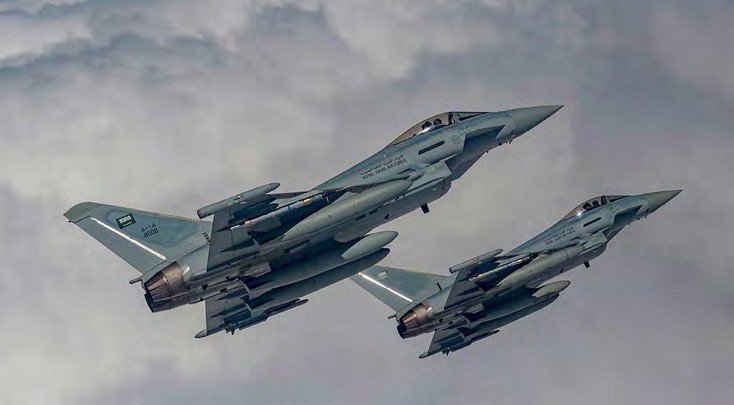 Because mission data is a sensitive national asset and remains understandably non-exportable, BAE Systems has set up an Electronic Warfare Operational Support (EWOS) facility to help the RSAF build its own mission data.

Before the new EWOS was fully established, BAE Systems formed its own mission data team, similar to that used by the RAF, to provide company-compiled mission data, and this is believed to have been used by the RSAF during operational missions in Syria. 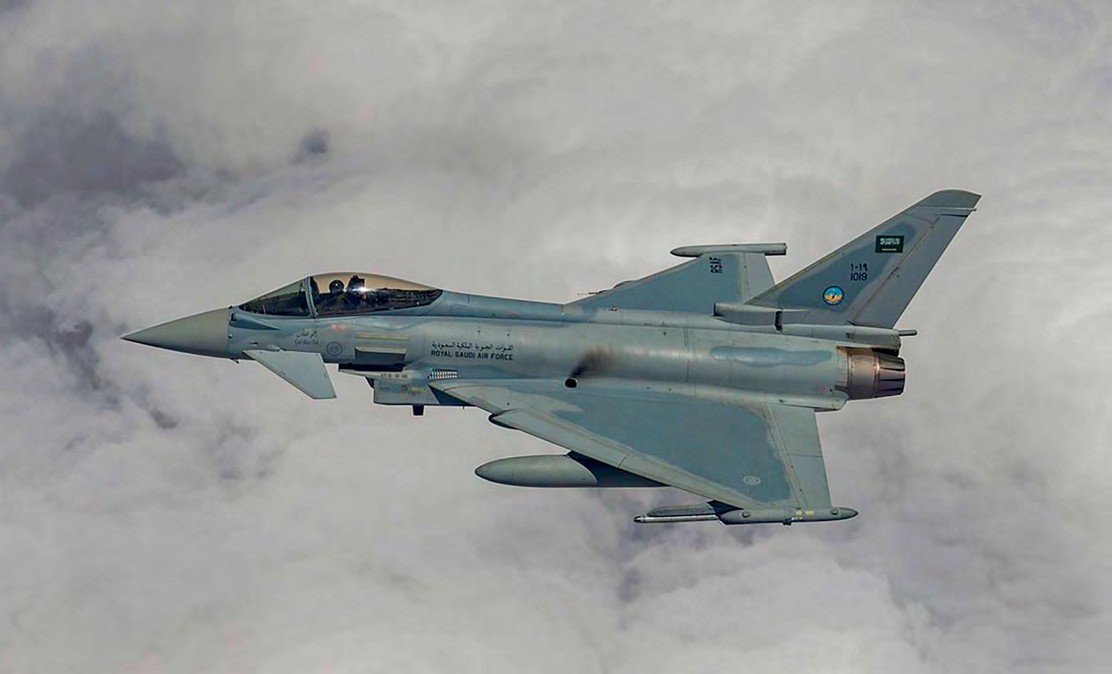 The pilot explained how good DASS performance (which can only be assured from robust mission data) is of reputational importance to the Eurofighter programme, the UK government (the Saudi Typhoon deal was on a government-to-government basis) and to BAE Systems as prime contractor. 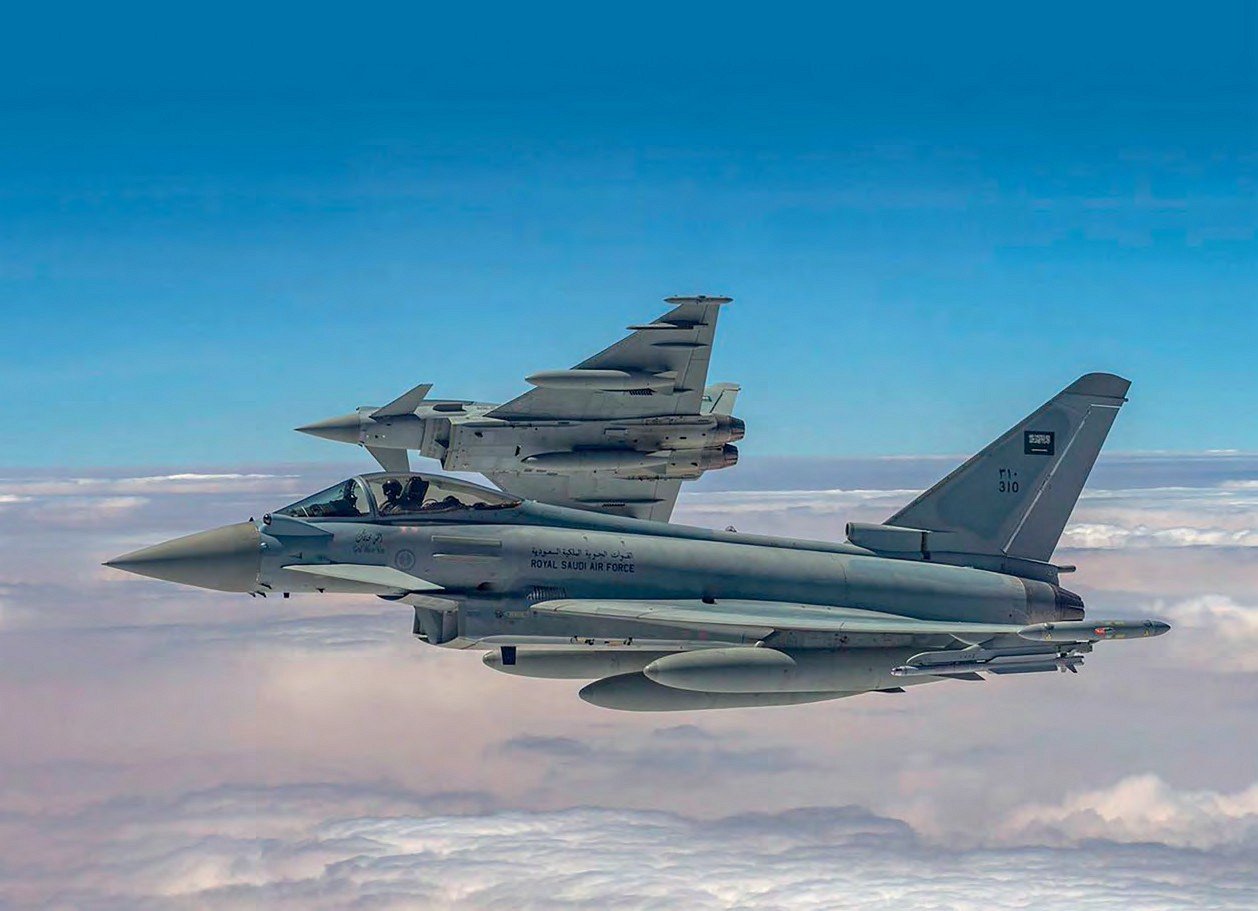 Delivery of three batches of Typhoons (totalling 72 aircraft) to the RSAF is complete; the final pair of aircraft were delivered in June 2017. BAE Systems remains optimistic of a further order, but sources differ as to how big such an order might be. Initially, many expected the Saudis to place an order for a further 72 aircraft, but more recently 48 has been mooted. The Saudis continue to aspire final assembly of any new aircraft in the Kingdom (as was originally planned for the second and third batches of RSAF Typhoons).

Regardless of any further orders, Saudi Arabia has already taken on a bigger role in the management of the Eurofighter programme, gaining a seat on the NATO Eurofighter and Tornado Management Agency in 2012. This gave the RSAF a greater say in deciding future development priorities, though since then the programme has become more responsive to individual customer requirements. Adding further air-toground capabilities is understood to be a high priority for the Saudis. The RSAF has pushed for the earliest possible integration of the MBDA Storm Shadow conventionally armed stand-offmissile, and is also understood to want a direct fire weapon. This will probably be the dual-mode Brimstone, though at one time integration of the French AASM (Armement Air-Sol Modulaire) or HAMMER (Highly Agile Modular Munition Extended Range), a medium-range modular air-to-ground weapon, was predicted.