Before everything the coronavirus to a temporary brought halt, New Delhi’s Indira Gandhi International Airport (IATA: IGI) was responding to booming passenger traffic figures by pursuing an expansion and enhancement project costing US$1.3 billion.

Already spread over 5,105 acres (2,066ha) on the southern edge of the city, construction crews have been building a fourth runway, an elevated taxiway and revamping Terminal 1. That work started in 2019, with the goal of growing airside capacity from 100 million passengers per annum (mppa) to 140 mppa by the end of this June.

This delivery date may slip, however. Construction work was halted on March 24 when the Indian government imposed a lockdown on the country’s population to slow the progress of the virus – in the hope of preventing the country’s health service from being overwhelmed. Despite the Covid-19 crisis, the airport operator is pushing ahead with its expansion plans for Delhi’s IGI Airport All images: DIAL

Nevertheless, Kishu Teckchandani, CEO of India Aviation Consulting & Support, in New Delhi, predicts that the project will continue after the pandemic subsides, given that demand for flights to the facility is unlikely to decline. “Once the full flights are in operation [after the lockdown is lifted] growth of 10% for the domestic [traffic] and 2 to 3% for international is projected for the following year,” he said.

Looking ahead, Prabhakara Rao, deputy managing director of airport majority owner GMR Group, added: “Keeping in view the unprecedented growth in the number of people travelling by air over the last few years, expansion of Delhi Airport has become essential to make it future-ready.”

GMR is a 64% majority shareholder in Delhi International Airport Limited (DIAL), which owns IGI. Other shareholders include the central government’s Airports Authority of India (26%), and Frankfurt airport operator Fraport (10%).

According to GMR’s annual report 201819, in the financial year ending March 2019 – the most recent figures available – the airport registered 69.23 million passenger movements, which was 5.4% up on the previous year. This period of solid growth followed three years of breakneck expansion – namely 13.8%, 19.2% and 18.1% year-on-year, dating back to 2015-16. The number of aircraft movements in the financial year ending March 2019 exceeded 460,000 and more than 1 million tons of cargo was transported, with the airport serving 149 routes.

The project, dubbed the ‘Phase 3A’ expansion, was devised within IGI’s 2016 master plan. Already, part of Terminal 1 has been demolished, while other sections are going to be expanded and revamped while the airport is still operating. The surrounding apron is also being replaced. “The area of Terminal 1 will be increased by three times from 64,140m² to 192,985m² and the apron area from 282,000m² to 629,285m²,” said a DIAL spokesperson.

Terminal 1, which will continue to be home to domestic low-cost carriers, will get more aircraft stands – the number rising from 55 to 82 and all of these will be Code C. The new terminal will also introduce its first airbridges, 22 of them. The present structure has none, with all passengers having to be bused to and from the aircraft.

Take-offs and landings will also become more efficient thanks to the construction of a 1.3-mile (2.2km)-long dual elevated taxiway. It will carry aircraft over the 2.5-mile (4km)-long approach road to DIAL’s key international and premium domestic flight Terminal 3 that runs between the airport’s two main runways – the 14,534ft (4,430m) 11/29 to the south and the 12,500ft (3,810m) 10/28 to the north. At present Terminal 1-bound flights arriving and departing on runway 11/29 spend a long time taxying because Terminal 1 is on DIAL’s northern side.

Other planned improvements include widening the ‘central spine’ road that leads to the airport from the current eight to 12 lanes and building a dedicated road for cargo. There are also plans for a new flyover to segregate heavy vehicles from passenger cars, and additional lanes will be built at the Terminal 1 departure road ramp and the arrivals forecourt in order to improve traffic circulation. The design of T3 means that passengers have a long walk to their departure gate, but DIAL is working towards easing the journey from check-in to boarding

The new runway, located on the southern side of the facility will be 14,435ft (4,400m) long. When complete, it will be the airport’s second dependent runway – the other is 9,229ft (2,813m) and is located on the northern side. The existing dependant runway is not used for certain chartered and non-VIP private flights because the eastern approach path takes aircraft very close to the Indian parliament building, the Rashtrapati Bhavan (the official residence of the Indian President) and the Prime Minister’s office. Security services want to reduce the risk of runway users staging a September 11-style attack in Delhi. No such restrictions will apply to the new dependent runway.

So, it’s clear expansion is needed and while the investment is undoubtedly impressive, Vijay Prakash Agarwal, a former chairman of the Airports Authority of India (AAI) told Airports International that he doesn’t know how IGI will deliver 140 mppa, as airliners’ average capacity will fall when the A380s are replaced by smaller types. He explained that the new runway will be a ‘dependent’ type, ie, it cannot perform simultaneous take-offs and landings with runway 11/29 because they are closer together than the legally stipulated 3,937ft (1,200m).

Mr Agarwal stated: “It would hardly add another 15 to 20 daily movements.” Under Indian air traffic control rules, one main runway can accommodate up to 45 movements in an hour, even with two main and two dependent runways, Mr Agarwal projected that IGI could handle only 120 aircraft movements per hour. Furthermore, he said that even achieving this would be difficult, as runway 27 and 28 on the northern side are not parallel with each other, thus making air traffic control more complex.

If there is a large number of additional flights, he anticipated that work may be needed to speed arriving and departing passengers through the airport to avoid overcrowding and congestion. DIAL is already focused on this but it is awaiting government regulatory approval to use facial recognition technology to screen passengers accessing the terminals’ airside departure areas. This, an aviation industry source said, has been partly prompted by the fact that passengers are often accompanied to the airport by large groups of friends and relatives, some of whom use fake tickets to get airside (and are subsequently discovered when they try to leave having not boarded a flight). Such problems have made it necessary to intensify the manual verification of IDs at the terminal entry gates, which is generating long queues.

Phase 3A should also improve passenger throughput by simplifying the airport layout. After Terminal 1 is expanded, Terminal 2, which currently handles a mix of lower-cost and premium domestic flights to and from various Indian destinations such as Ahmedabad and Goa, will no longer be used by commercial passengers and DIAL has yet to decide on its future use. This rearrangement has led to some confused departing passengers arriving at the wrong building – and that’s a problem given Terminal 1 is situated 3 miles (5km) away from the other two terminals. Some have been known to miss their flights. In addition, Terminal 2 is not connected to Delhi’s metro railway, while Terminal 1 and 3 do have stations for this important public transport service. 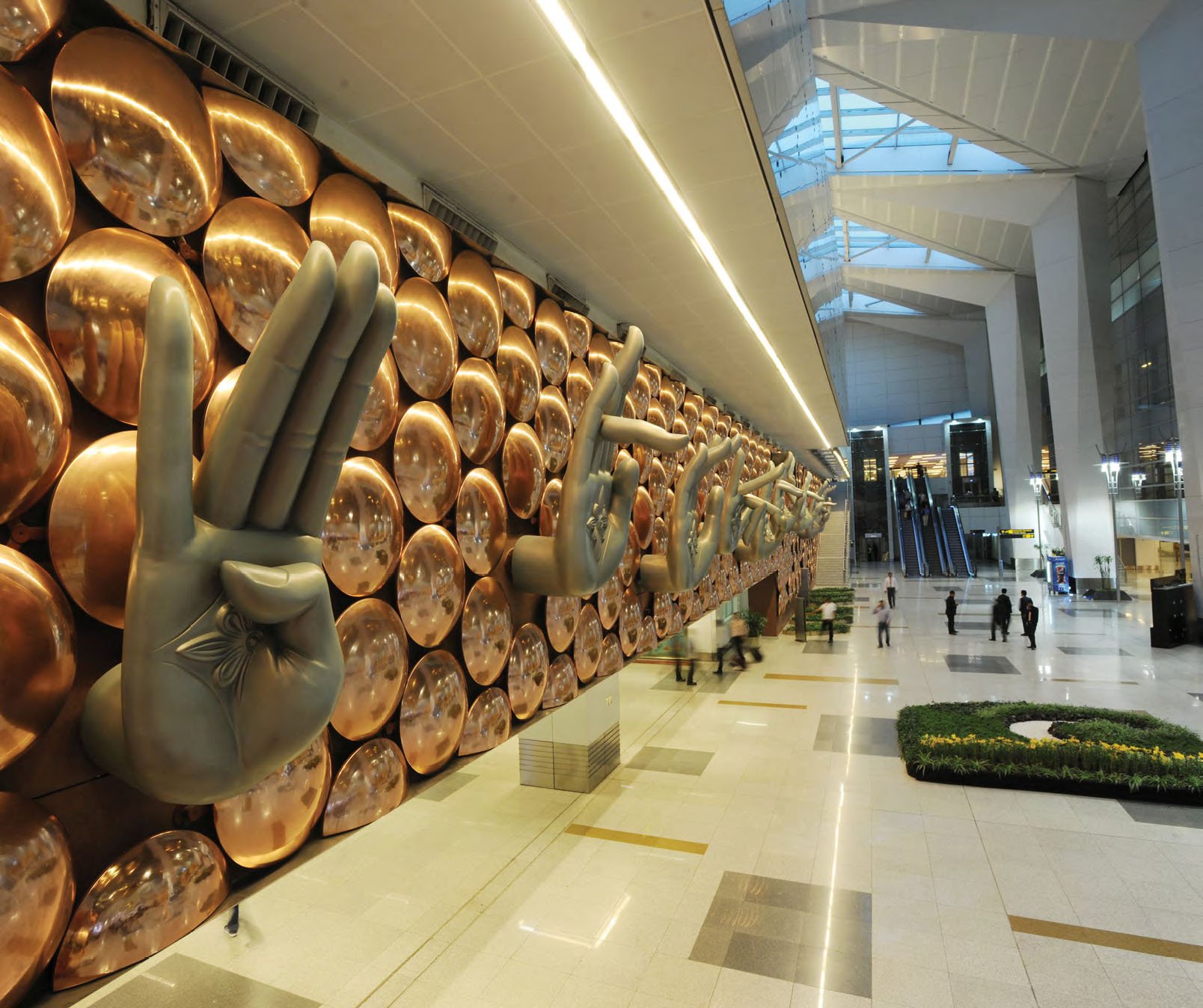 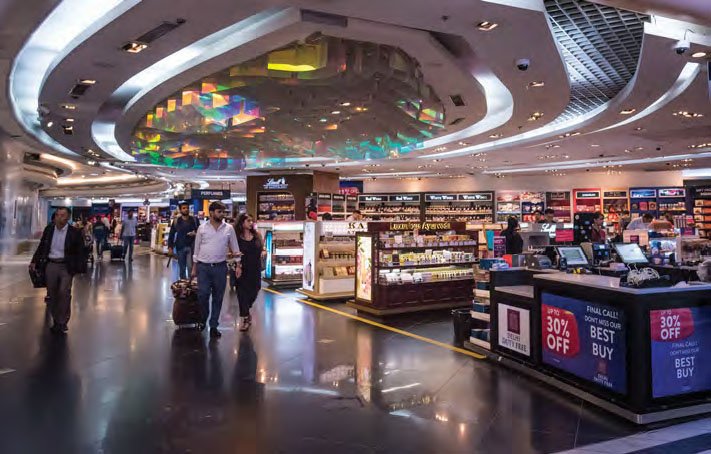 All aspects of the through-airport journey are under scrutiny, with the aim of improving the overall passenger experience

DIAL is also working on some of the finer points of the project. It has decided against installing carpets in the new terminal or reinstalling them in the larger Terminal 3, which has a surface area of 5,489,594sq ft (501,000m²). T3’s floor was fitted with 1,829,864sq ft (170,000m²) of carpet in 2010 but this was later removed in stages after passengers complained it dragged their baggage wheels and slowed their progress to and from gates. This matters, given that traversing T3 involves a long walk, which – according to Mr Teckchandani – is a disadvantage of DIAL’s design. “To overcome this issue there should be at least 20 [electric-powered] buggies during the peak hours, which are not there currently,” he said, adding: “Maybe they want to make the nation healthy by making people walk.” Another innovation that DIAL has been focusing on to move passengers inside a terminal more efficiently is a ‘Food Genie’ service, which enables hungry travellers rushing for flights to pre-order food from an electronic kiosk for prompt delivery at the boarding gates.

The airport has also developed a range of apps for passengers’ mobile phones. These include ‘shop and collect’ so that purchases can be made from terminal stores on a departing flight and picked up on return to arrivals. There is also ‘city check-in’ enabling travellers to check in for flights from a city centre metro station; and ‘women cabs’ with female drivers for female passengers.

Travellers using IGI can also download its HOI mobile app to update them on flight times, check in online and get help with terminal shopping by identifying relevant stores. Additionally, there’s an interactive map to ease navigation through the airport. It is constantly updated by DIAL’s social media command centre.

In February the airport introduced a facility for passengers to be picked up and dropped off at their homes or hotels for a fee. A DIAL spokesperson noted that this service gives tourists the freedom to make a city tour without worrying about their baggage before they arrive at IGI for an afternoon or evening flight. “Our primary focus is to enhance the consumer experience,” he said, stressing the airport planned to install baggage self-drop off kiosks for pre-checked-in passengers. Such innovations contributed to IGI winning a 2019 Airports Council International (ACI) Airport Service Quality Award.

Another facility at IGI is the ‘GMR Aerocity’, a commercial and residential district of the airport site built by the Indian conglomerate GMR, which includes 12 hotels with 3,800 rooms, along with around 1.9 million sq ft (185,000m²) of commercial space between Terminals 1 and 3. This development has been expanding too. In January 2019, the developers launched the ‘GMR Square’, which connects the Aerocity’s metro station to its major hotels and offices through a new walkway – and there are plans to build another 2,000 hotel rooms in the district, located 2.5 miles (4km) from Terminal 3.

Looking ahead, despite the ongoing expansion, industry watchers are concerned that IGI will not be able to serve the projected air passenger demand of the capital and the neighbouring areas, and so hence, a second regional airport is being built, for completion by 2024, in Jewar, about 43 miles (70km) to the east, in the neighbouring state of Uttar Pradesh. “Initially, domestic traffic flying from the east will shift to Jewar and then gradually flights [will be added] from other directions,” said Mr Agarwal. Its success in attracting traffic will depend on concessions that the airport operator, Flughafen Zürich AG, will offer carriers.

Mr Agarwal said airlines anticipate airport charges at Jewar may initially be higher than those at IGI, but if Jewar keeps them on a par with IGI and delays its return on investment, it might turn out to be a better strategy.

Ultimately, congestion at IGI could help Jewar’s business. If an 8pm slot is not available at IGI, airlines scheduling flights at that hour will simply go to Jewar, he said. And Mr Agarwal warned a third airport, located to the north, might ultimately be needed to efficiently serve the 20 million people metropolis of Delhi and its surrounding towns and cities. “There is a need for third airport as well,” he argued. Time will tell if that proves true.