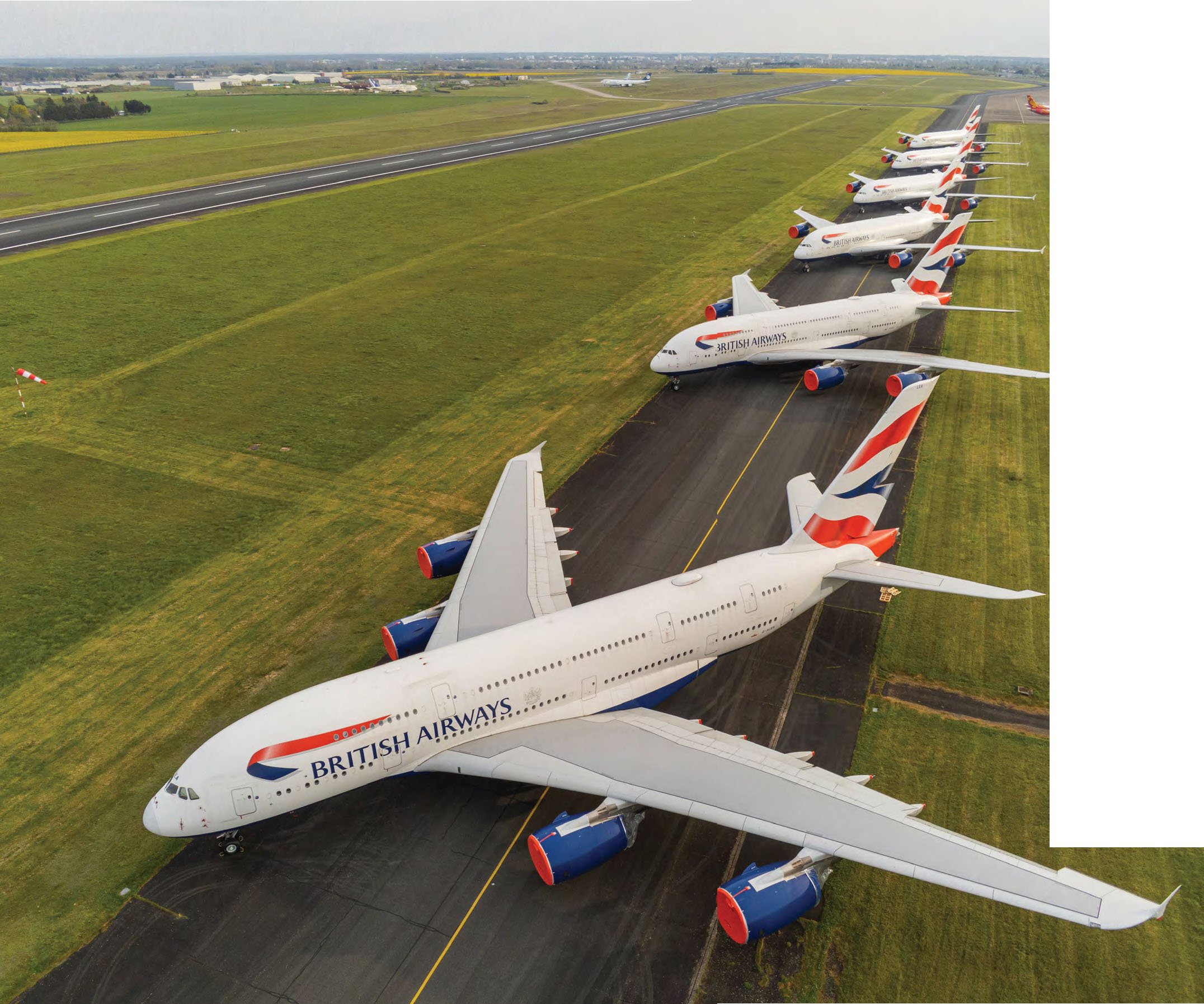 Those and between hours minutes landing and taking off again – an aircraft’s turnaround time – are critical not only for passengers, crew and cargo, but most importantly for servicing and gearing-up the aircraft for its next flight. Turnaround can vary from as little as 30 minutes to a couple of hours, but is always stressful for airlines and airports alike. Airlines want the shortest possible time on the ground, to squeeze the maximum value out of their aircraft by keeping them in the air, while airports need ground space to be released to maintain the flow of arrivals and departures.

During turnaround, several ground handling functions are carried out involving cabins, catering, ramps and passenger services, together with field operations by highly trained engineers and technicians. They are aided by highly sophisticated and technologically savvy ground support at the terminal gate or a remote stand.

But what happens when the timespan between flying-in and flying-out extends to four or five months or even more? This is exactly what happened during the COVID-19 crisis, when two-thirds of global commercial aircraft were grounded due to the lockdown and ban on air travel.

The billion dollar question (note, billion not million – the latter lost its significance in the coronavirus environment) is: when will we emerge from the COVID-19 crisis and will the aviation industry recover to its former glory? Given the depth of the crisis and the growing probability that it will trigger a global economic recession, I expect the recovery to last for a significant period. We do not know when the industry will return to pre-crisis levels, although we can be sure that healing will be slow. Going by past experience in similar circumstances, the traffic recovery periods for economic-, health- or terrorism-related crises, it took the world nearly four years to recover to pre-9/11 status and nearly seven years to recover from the 2008 global financial crisis (GFC).

But, as the saying goes, when fishermen can’t go to sea, they repair their nets.

On June 1, the ICAO Council adopted a new report and recommendations aimed at restarting the international air transport system and aligning its global recovery. Named Take Off: Guidance for Air Travel through the COVID-19 Public Health Crisis, the report provides the framework of risk-based temporary measures for air transport operations. It proposes a gradual approach to restarting commercial aviation using generally applied measures created by using the recommendations and guidance from public health authorities, to mitigate the risk of spreading the virus when travelling. However, IATA estimates that passenger traffic will not rebound to pre-crisis levels until at least 2023. It expects that global passenger demand in 2021 will be 24% below 2019 levels and 32% lower than the forecast it made in October 2019. Further, long-haul travel will continue to lag behind and passenger fears about flying in general will contribute to the delay.

All of this is contingent upon the public’s willingness to fly and instilling that confidence will take time, said IATA’s director general and CEO, Alexandre de Juniac. However, it is significant and reassuring to remember that traffic has always come back. 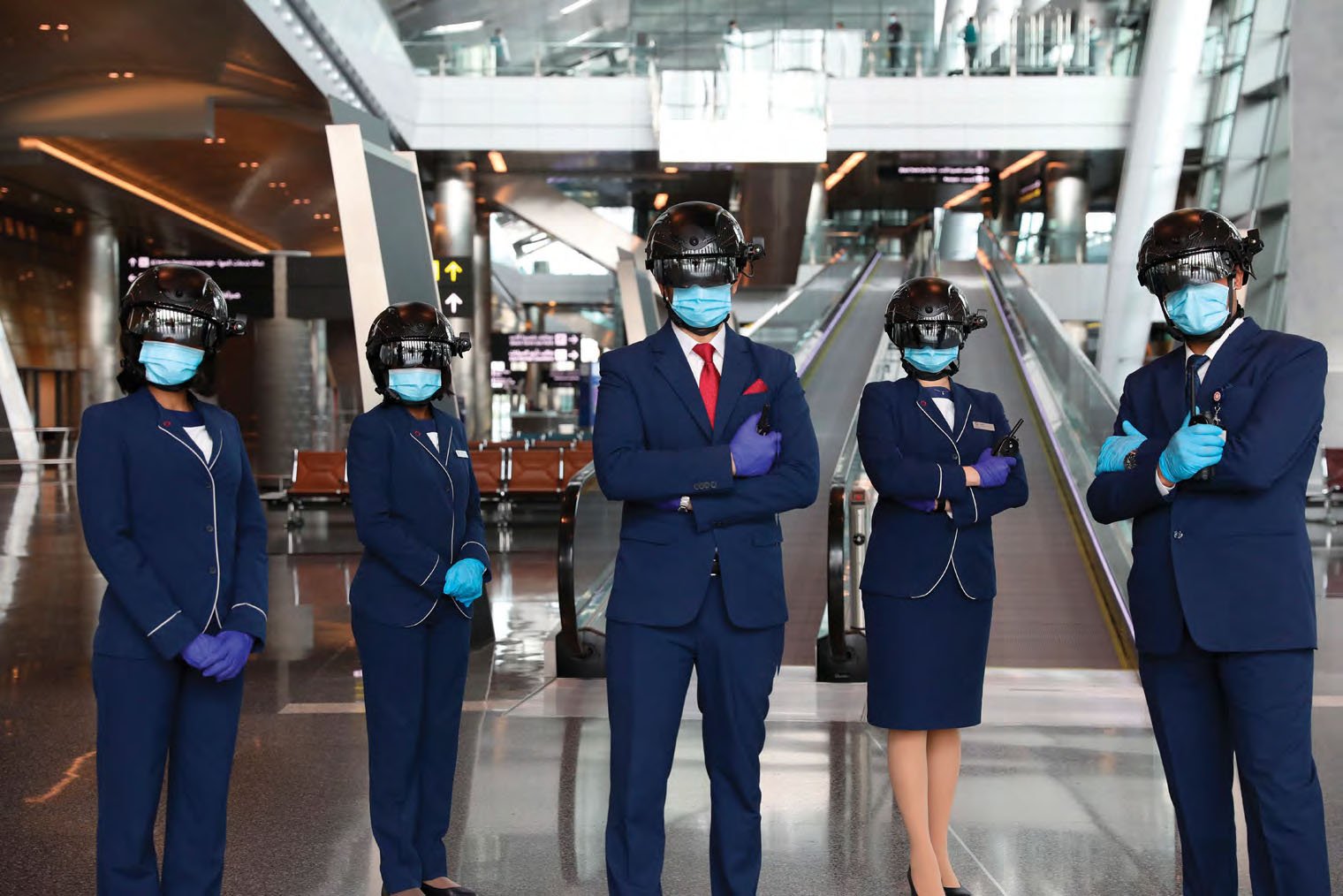 Is this the face of airport staff in the future? Technology can be used to assess passenger health and reassure travellers Hamad International

Airports Council International (ACI) World director general Angela Gittens noted: “The ongoing health crisis has resulted in an unprecedented disruption of global air transport and has imposed operational challenges to airside infrastructure. It is crucial for airports to implement adequate measures to mitigate the risks created by aircraft overflow parking, and to continue to ensure best safety practices and airfield operations. As the industry navigates the crisis and then plans for a stable recovery, airport operators should also consider recertification of runway and taxiway pavements used to park aircrafts during the COVID-19 pandemic before resuming operations.” 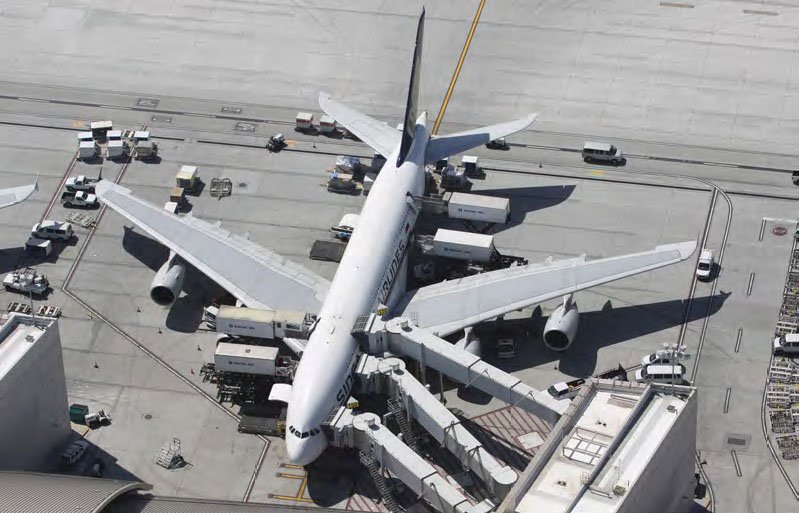 As this issue of Airports International went to press, many airlines were about to reintroduce a small number of services. However, more than 16,000 commercial aircraft have been grounded worldwide. Finding the right space and conditions for 62% of the world’s airliners and keeping them airworthy, even when grounded, suddenly became priorities for 2020.

At the time of writing, according to Cirium’s fleet data, only four of the 239-strong global fleet of A380s are in service, the remaining 235 having been parked at 25 locations worldwide. Airports are packed with stationary aircraft as airlines reflect over long-term storage solutions for a crisis with no end in sight. Finding locations to support the temporary parking of overflow aircraft has become a herculean task. Not since the September 11, 2001, attacks on the US, when air travel largely collapsed and the world’s biggest aircraft graveyards organised to park US airliners, have so many of the world’s aircraft been grounded.

Due to the global COVID-19 pandemic, airlines have been obliged to ground and park most of their fleet. Airport operators are thus faced with the challenge of finding enough locations to support aircraft parking at terminal buildings and remote bays. This situation has led to airliners being placed on runways and taxiways in an unusually dense manner, leading to the risk of damaging pavements that were not originally intended for this purpose.

Specifically, static loads from aircraft over a prolonged period, especially on ‘flexible’ pavements, results in deterioration of the paving. As per ICAO directives, technical analysis should be carried out before overloading paving by more than 10% relative to reported pavement strength. While aircraft are parked, airlines also need to conduct aircraft maintenance and any resulting fuel or oil spills could cause the paving to deteriorate.

In addition, any lack of regular maintenance during the lockdown period could lead to the catastrophic failure of key pieces of ground support equipment (GSE) when it is least expected. Preventive maintenance is the key to keeping GSE operational and at peak performance. A regular schedule means unnecessary ad-hoc repairs are avoided, the useful life of the equipment is extended and its value is better preserved, and everything, not just the GSE, runs more efficiently. This reduces the expense associated with repairs, downtime, energy and the all-round costs of GSE maintenance.

Successfully restarting air passenger travel while simultaneously restoring confidence in its safety are vital prerequisites to enabling the global economy to recover from COVID-19. The significance and the role of ground support equipment in operational efficiency and safety of an airport and aircraft is paramount.

While much attention is rightly being given to how passenger terminals are being prepared to process customers in the post-COVID-19 scenario, I believe the preparation of GSE is just as important to the entire operation. Any lack of maintenance makes it just as vulnerable to failure as any other ‘link in the chain’ and, ultimately, could affect the potential serviceability and airworthiness of an aircraft. While GSE is not in the public eye to the same extent as a passenger building in terms of regaining passenger confidence, nothing is more important than the customer being reassured that their particular airline has been diligent about all aspects of its maintenance work.

According to a recent ACI statement, aircraft that are temporarily stored away from their home base airport must be repositioned to those homes for extensive maintenance prior to re-entering service. This will mean that they will inevitably be accommodated among both operational and other parked aircraft.

During the lockdown period, some unusual situations came into focus. For example, one big challenge associated with parking airliners for relatively long periods is the effectiveness of their brakes. This can fade within 24 hours and each large jet may require ten or more chocks behind the wheels to keep them in position. With so many aircraft grounded, imagine the number of chocks required!

Airport operators storing large numbers of airliners must check runway and taxiways before resuming operations to ensure any distressed areas are identified and rectified or there is a risk that aircraft will be damaged. Inevitably, such repairs can be very expensive, time consuming and can lead to extensive flight delays.

All of us who are engaged in airport operations are in some way tasked with assisting in the preservation of grounded aircraft. There is a responsibility that includes systematically powering up aircraft and running their engines, keeping the sensitive electrical and hydraulic components safe, checking flight controls, and covering sensors and engines to protect their inner workings from dirt, dust, sand and moisture. Parked airliners are often substantially loaded with fuel to keep them from rocking in the wind and to ensure their tanks stay lubricated, but are stored at locations with no fuel hydrants, so it is GSE that delivers the solution. 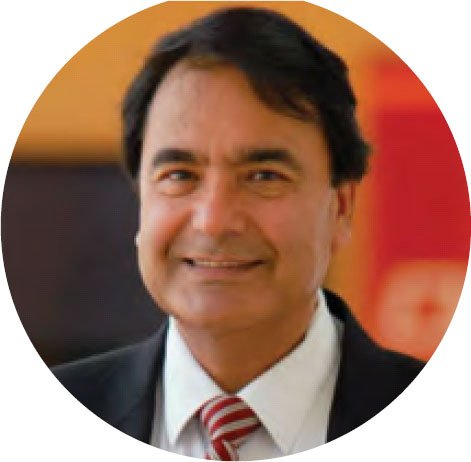 Readers are welcome to respond at inderjit.singh@aviationanalyst.net

The decision to select new or upgraded GSE – and invest in its maintenance – will have a direct impact on cost-saving factors, including operational equipment’s efficiency, reliability and longevity, thereby affecting the financial bottom line of the airport operator and airline alike. Provisions are being made for personal protective equipment (PPE), such as masks, gloves and face shields, to ensure the wellbeing of the engineers and technicians and this should be universal. Technology should be deployed for airside safety and efficiency and everyone entering the airside area should be screened by temperature. 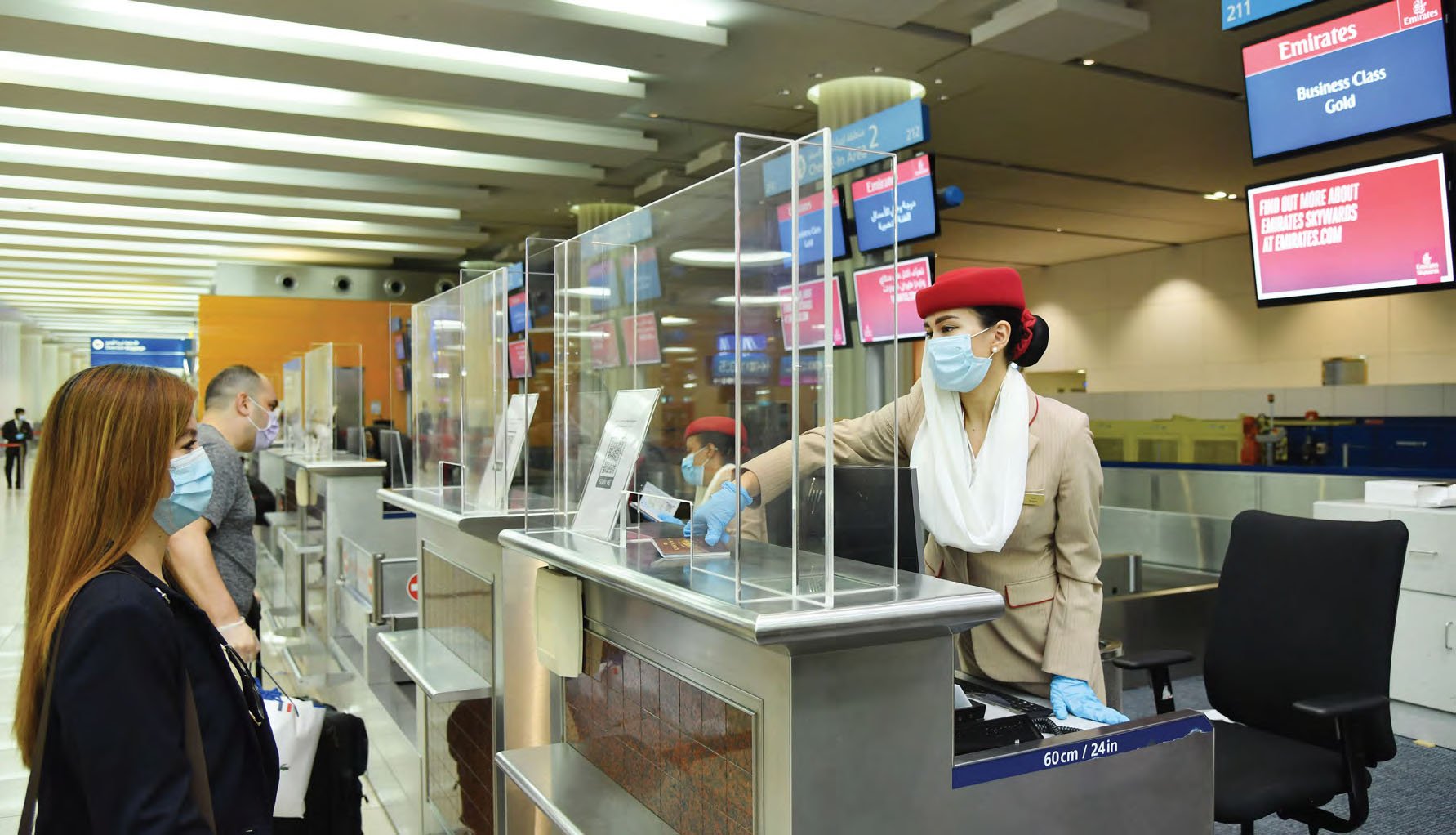 As air transport takes its first steps toward resuming services post-pandemic, restoring public confidence through the industry’s preparations will be all-important Emirates

Airports and airlines may also benefit from the versatility of unmanned aerial vehicle (UAV) technology. Applications range from airport inspections to bird control and drone delivery of cargo and other items within the airport boundaries. This technology could reduce the number of collisions on congested aprons, runways and taxiways, as well as save fuel and manpower. Precision Approach Path Indicator (PAPI) inspections have traditionally been carried out by flight inspection aircraft, but drones can be equipped to check that PAPI lights comply with regulations, including transition angles, symmetry and horizontality

In the absence of a vaccine, COVID-19 will have to be dealt with in a cautious and calibrated manner, starting air transport operations with a limited number of passengers on narrowbody aircraft, then increasing volumes gradually.

The mantra to deal with the situation is ‘Care, but no scare’. Aviation will never be the same after COVID-19 because it will be more secure, safer, more robust and healthier.