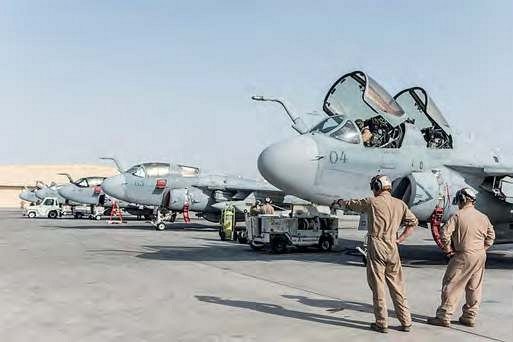 The end of the career of the EA-6B Prowler came a step closer in November when the last unit to use the type, Marine Tactical Electronic Warfare Squadron 2 (VMAQ-2) ‘Death Jesters’, returned to its home base Marine Corps Air Station Cherry Point, North Carolina. It had been deployed to Al Udeid Air Base, Qatar temporarily assigned to the US Air Force’s 379th Air Expeditionary Wing to take part in Operation Inherent Resolve. The US Marine Corps has operated the type in four squadrons for a Marine Corps record for an aircraft type of over 42 years, but this last operational deployment marks the swansong of the type’s service with the US military. The squadron is scheduled to stand down in March 2018 while the US Navy retired the jet in June 2015. Unlike the Navy the Marine Corps does not intend to replace the Prowler with the EA-18G Growler but will use its F-35Bs in combination with electronic warfare payloads carried by other platforms including UAVs to perform its role. The unit’s six aircraft, BuNos 163045/CY00, 162934/CY01, 162230/CY02, 163032/CY03, 162228/CY04 and 163047/CY05 passed through Souda Bay, Crete on November 2 on their way home.