An end to the Brandenburg wait

After almost a decade of delays and disasters, Berlin Brandenburg Airport Willy Brandt is finally open for flights. Tara Craig and Gordon Smith celebrate the achievement 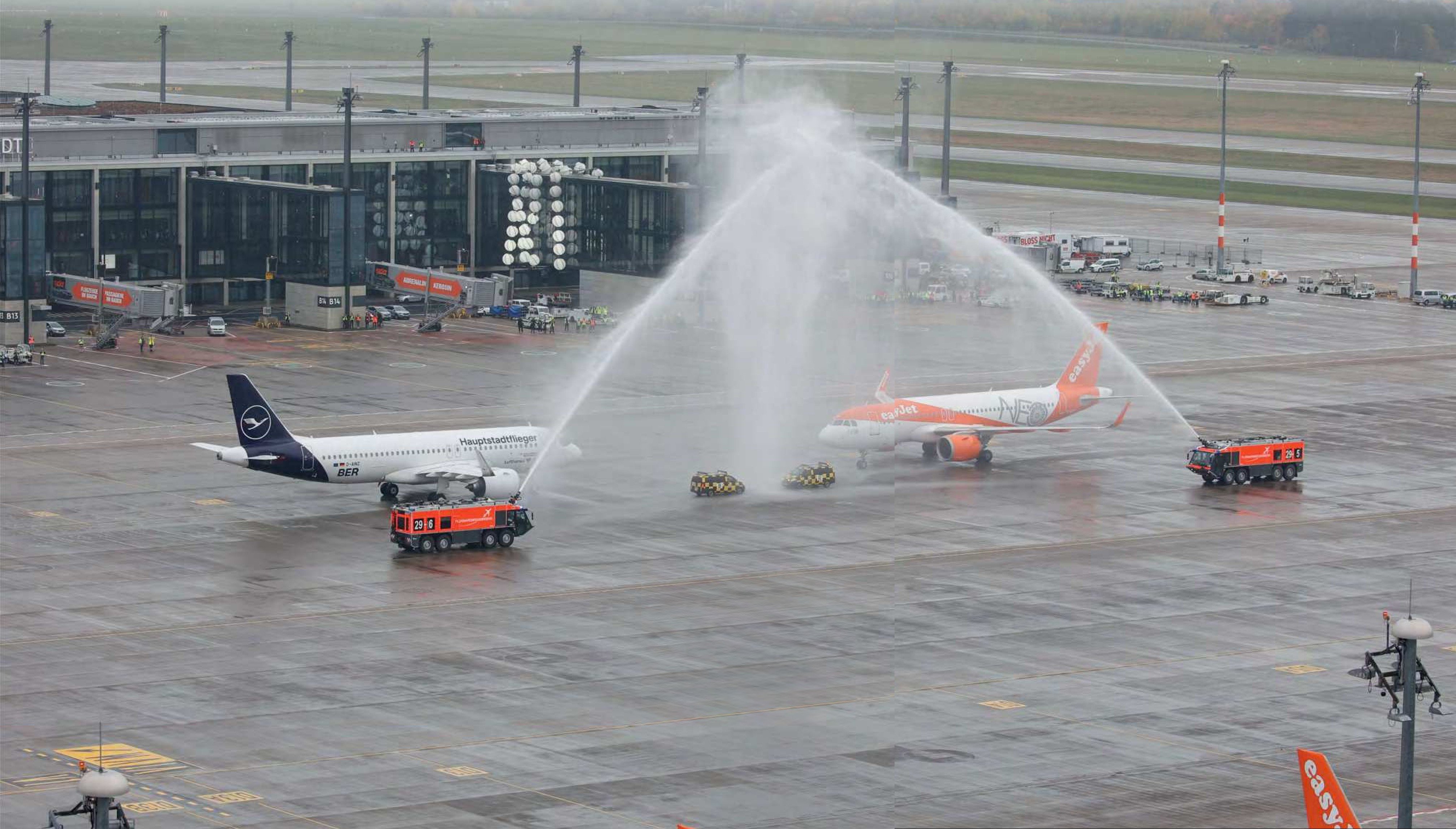 “The people here in the German capital region have had to wait a long time for this day,” said Daldrup. “With Berlin Brandenburg Airport Willy Brandt, eastern Germany can now rely on airport infrastructure that will serve as a solid basis for the coming decades… Berlin’s three airports in Tempelhof, Tegel and Gatow have stood for the freedom of West Berlin since the Airlift. But Schönefeld Airport was also the gateway to the world for the GDR, despite travel restrictions. The blockade of West Berlin in 1948 left its mark on Willy Brandt and later determined his actions as Governing Mayor of the city. Freedom, as defined by Willy Brandt, also includes freedom of movement and the ability to travel without restrictions. Naming the new airport after Willy Brandt is the ideal choice. Berlin and Brandenburg, and Germany as a whole, can be proud of this.” 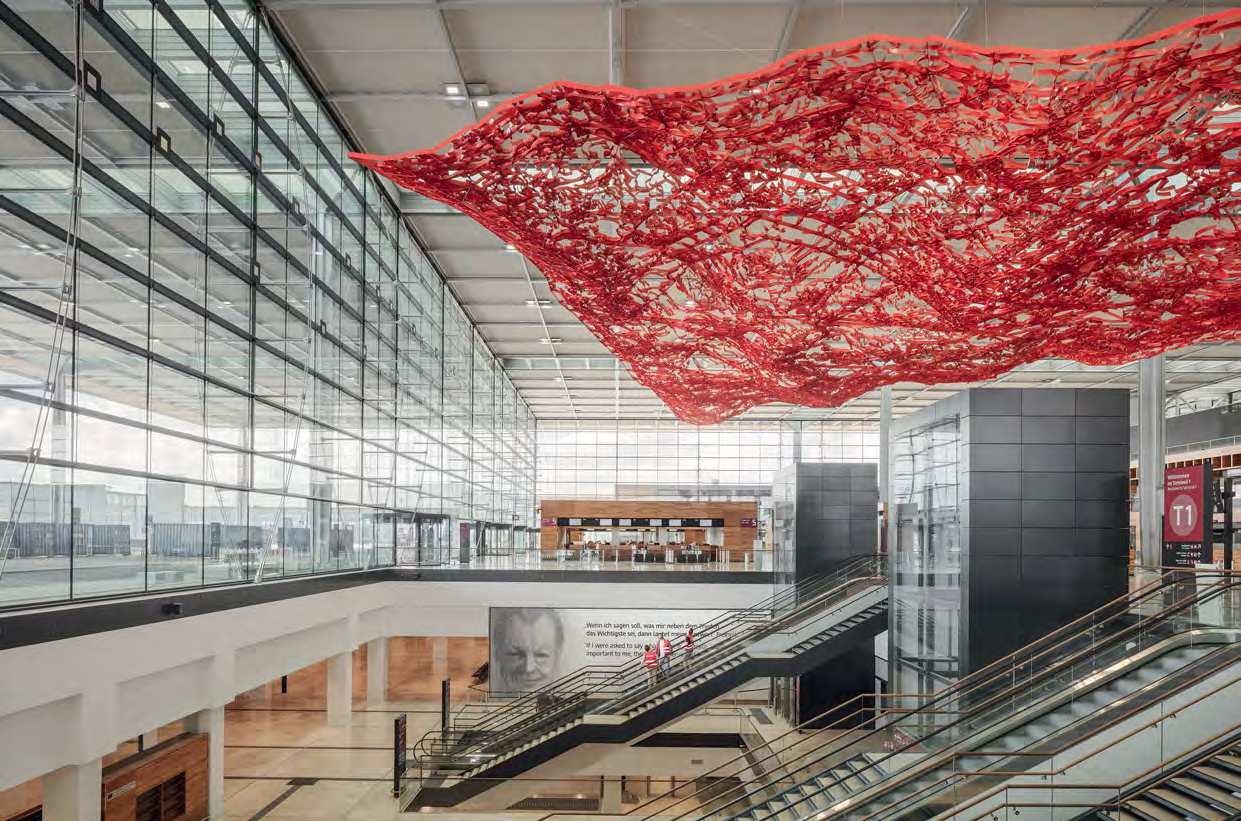 GMP designed BER’s terminal hall to be airy and bright, with a colonnade motif intended to reflect the transition between architecture and landscape
Marcus Bredt

The last nine years have seen BER’s opening announced – then delayed – several times. The reasons given by operator Flughafen Berlin Brandenburg include the extension of Terminal 1, construction of an intermediate level and expansion of taxiways and aprons. EU safety regulations played a part, too, requiring the addition of the pavilions on either side of the terminal.

The project was also beset by a number of errors, oversights and mishaps, including the insolvency of the engineering office responsible for the technical building systems. Following a cancelled inauguration in 2012, the contract with the general planner was terminated and construction work came to a standstill. It would be another five years before the airport company felt confident enough to publish a revised opening date of October 2020.

The opening follows 27 days of trial runs involving 24,000 BER employees and 9,897 ‘extras’. Trials revolved around 279,000 items of prop luggage and 54,000 bookings for 2,530 flights. Among the changes made following feedback were adjustments to airport signage, the introduction of bigger bins and the installation of extra charging points.

The new airport, originally due to open on October 30, 2011, is capable of handling 40 million passengers a year, 25 million of them at Terminal 1. The operating company expects more passengers to board and disembark at BER than any other location in Germany and predicts that its infrastructure will facilitate a significant increase in long-haul services and connecting traffic. Construction costs alone came to €5.9bn, financed by Flughafen Berlin Brandenburg (15%), shareholder funds, equity and shareholder loans (39%) and guaranteed bank loans (47%). 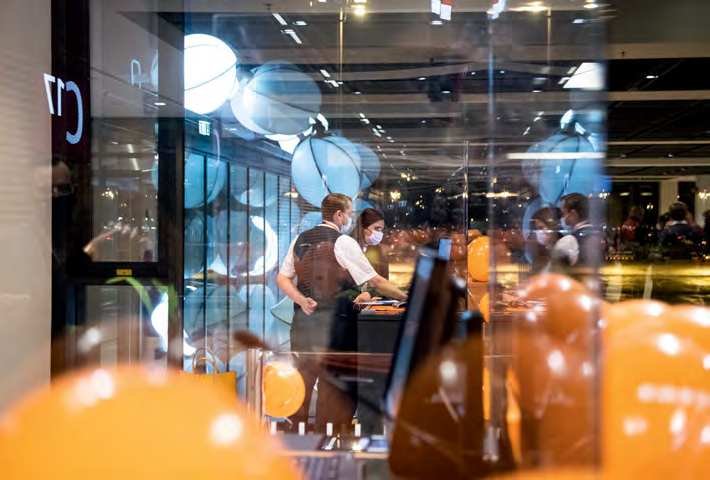 easyJet is one of BER’s key airlines, and staff were on hand to welcome passengers from flight EJU3110, among them CEO Johan Lundgren, which landed on October 31, 2020
Flughafen Berlin Brandenburg/Anikka Bauer

BER covers 1,470 hectares, 20km southeast of Berlin city centre. Terminals 1 and 2 sit between the two parallel runways, while the eight to ten million passenger capacity Terminal 5, the former Schö nefeld Airport, is in the northern part of the site. The two runways can be operated independently, with the first flights leaving from the southern runway on November 4. Terminal 2, designed to handle six million passengers a year, is expected to open for the 2021 summer flight schedule, as the COVID-19 pandemic has meant that the additional capacity is not required at present.

Designed by Hamburg architects Gerkan, Marg and Partners (GMP), Terminal 1 is the largest of the BER facilities, with echoes of the Schinkel and Bauhaus architectural schools in its geometric shapes and structured façades.

Facilities include 10 check-in islands with 118 desks, 36 security screening lines for departures and an additional five for transfer passengers, and a baggage reclaim hall with eight carousels. Its construction required 30,000 tonnes of reinforced steel and 9,000 tonnes of mild steel.

“The new airport can handle 40 million passengers a year, 25 million of them at Terminal 1”

According to GMP, the design was based on a horizontal grid of 6.25m, multiplied by seven. This gives a ‘supermodule’ of 43.75m, the parking width required for a category C aircraft such as the Airbus A320, the most frequently used aircraft at Berlin’s airports. This 43.75m grid determined the spacing of Terminal 1’s main piers and their distinctive passenger bridges, as well as that of the columns in the check-in hall. Modularity and flexibility were also central to the terminal’s design, according to the architects. The high, airy main hall accommodates check-in and baggage handling, while three-storey bridges to the gates take passengers to distinct arrivals and departures areas, channelling Schengen and non-Schengen passengers along separate routes. Notably, the airport operator does not provide any in-house services for passenger or baggage handling, with each airline having contractual ties with independent service providers on site.

The 715m-long Main Pier has 16 jetways, the North Pier (350m long) has 12 walkboarding stands and the South Pier, also 350m long, has nine jetways. To the right and left of the terminal are the north and south pavilions, providing space for additional security screening lines and check-in desks. 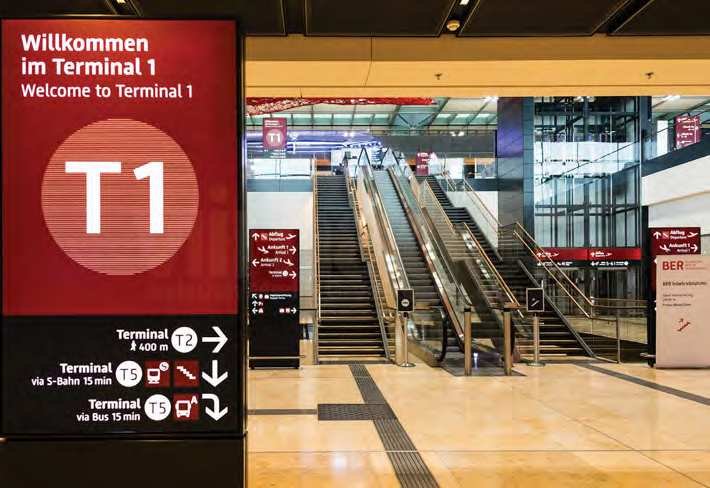 In line with its anticipated post-pandemic capacity, Terminal 1 has also invested heavily in its retail offering, with 120 shops, restaurants and other service facilities across more than 20,000m2 , a fifth of its retail space landside. Among the brands featured are Relay, Marc O’Polo and Ampelmann, Berlin’s iconic and muchloved traffic light figure. At the Food Court, the focus is on classic fast food. More than half of the service providers are from the Berlin-Brandenburg region.

Serving an urban population of 6.5 million and with a total catchment population of 22.2 million, BER will fly to 183 direct destinations, working with 86 airlines, the most important being easyJet, Lufthansa, Ryanair and Eurowings. Night flight regulations, confirmed by the Federal Administrative Court in October 2011, forbid regular scheduled flights between midnight and 5.00am. Early arrivals and delayed starts, as well as an officially stipulated quota of flights, are possible at off-peak times between 10.00pm and midnight and from 5.00am to 6.00am. 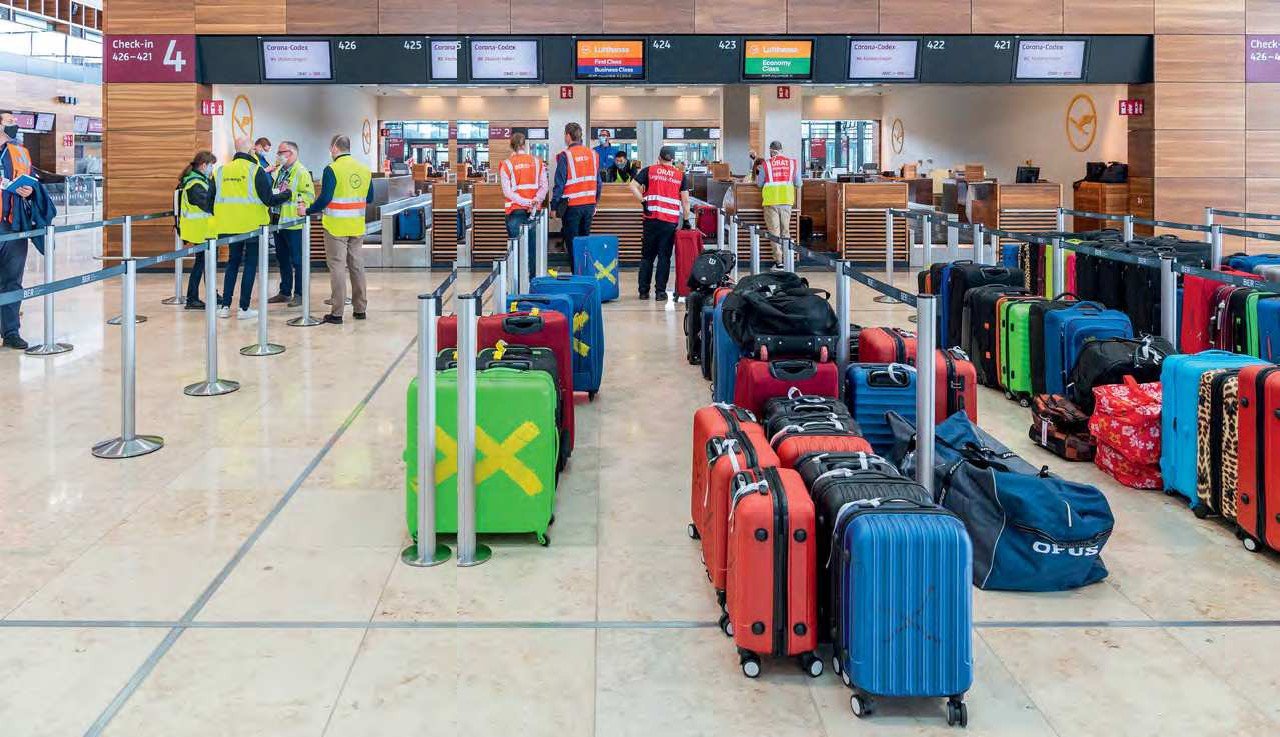 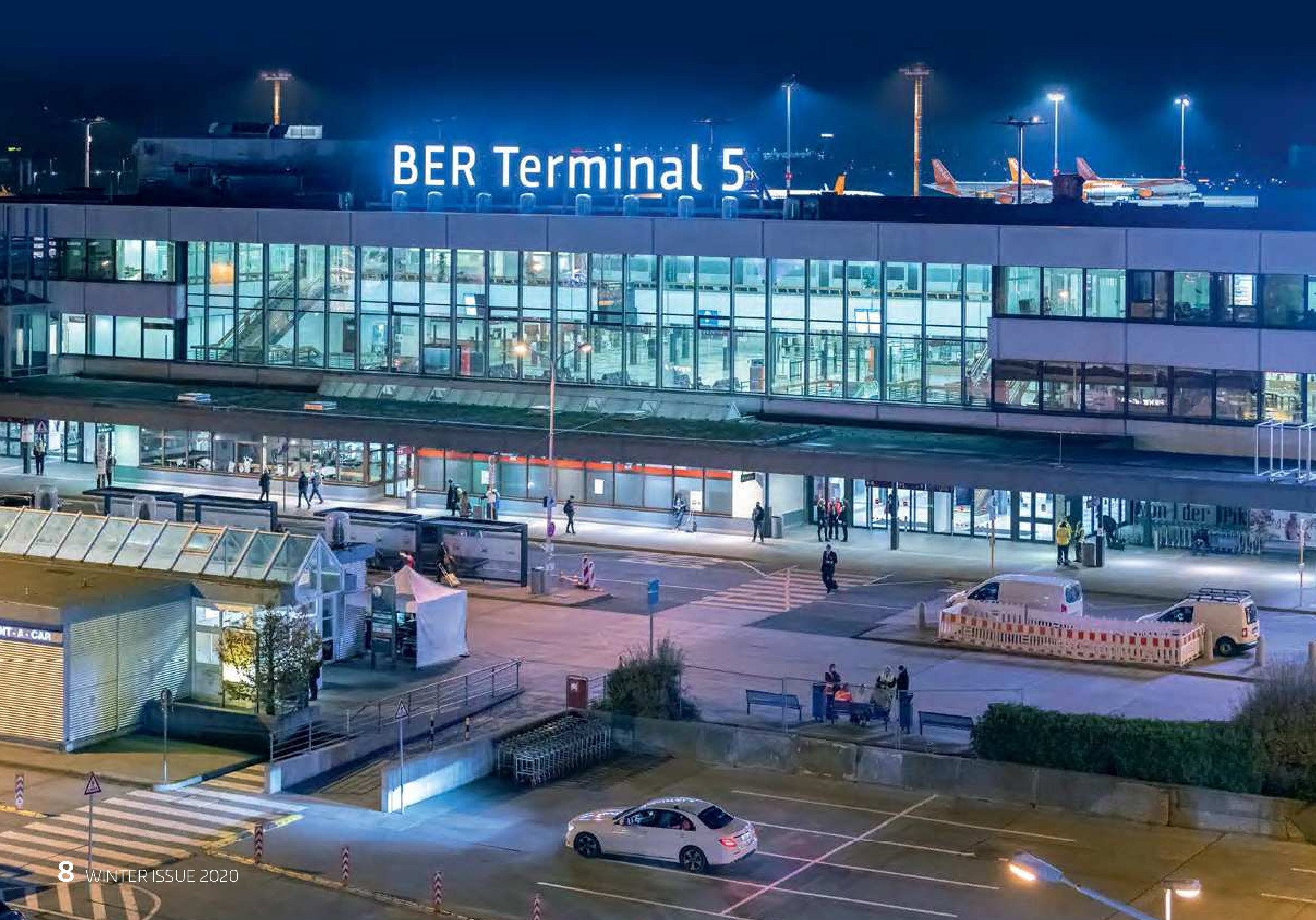 More than 90 air traffic controllers, aerodrome co-ordinators and apron controllers will control traffic at BER With both of the runways at BER now in operation, a number of new flight procedures have been implemented. Developed by DFS, the German air navigation service provider, for the planned opening of the airport in 2012, these new procedures reflect the independent operation of the two runways. For example, aircraft that will be landing in parallel on the northern and southern runways must maintain different altitudes when turning on to final approach. Aircraft heading for the northern runway, therefore, make a turn on to final approach at an altitude of between 3,937 and 4,921ft, while aircraft heading for the southern runway make a turn at an altitude of around 2,952ft. The public was closely involved in planning these revised flight procedures, with DFS discussing more than 100 different potential route options with the airport’s Noise Abatement Commission.

The new airport is well connected. Flughafen BER Terminal 1-2, a new sixtrack railway station beneath Terminal 1, was commissioned on October 25, 2020, with around two-thirds of passengers expected to travel to the airport by train. In addition to a dedicated autobahn link, numerous bus lines connect the airport with Berlin and the surrounding area.

Berlin Brandenburg Airport’s opening signalled the end of operations for the Berlin-Tegel Airport, with airlines moving to the new facility over the course of a week. Scheduled flight operations ended at Tegel on November 7, with the final flight taking off from the 72-year-old airport on November 8.

BER is expected to be a strong driver for economic growth and employment in the Brandenburg region and throughout eastern Germany. It is hoped that within 15 years around 40,000 people will make a living through working at BER, double the number previously employed by Berlin-Tegel and Schönefeld airports combined.

Among those in attendance at the muchdelayed opening ceremony was Dietmar Woidke, Minister-President of the State of Brandenburg. “I am delighted that BER is finally ready to start,” he said. “With the opening of the airport, the time has come to regain lost confidence. Now it is time to look ahead.”