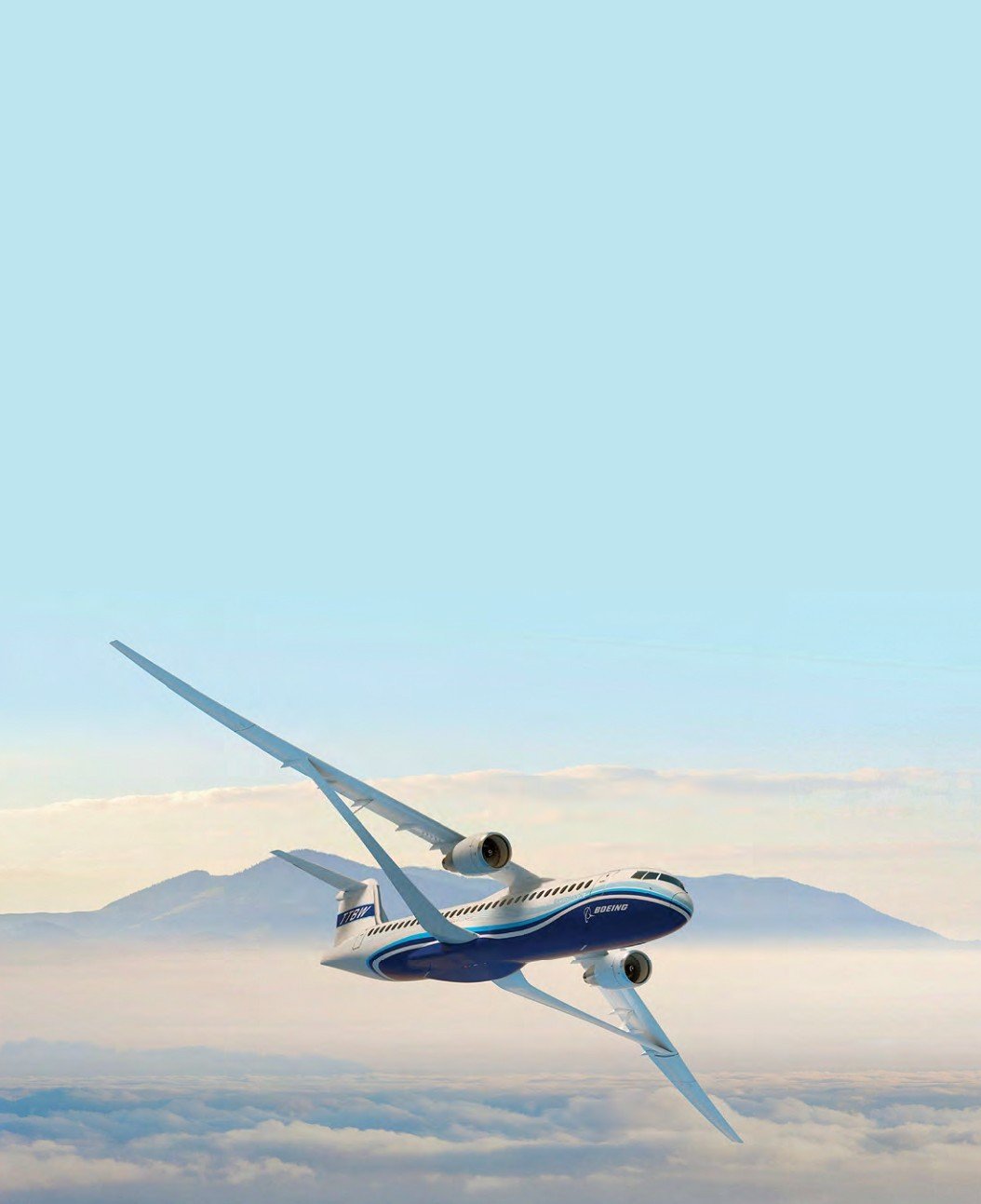 The latest artist’s rendering of the Transonic Truss-Braced Wing concept on which Boeing is working with NASA.
Boeing

FOR THE past decade or so, Boeing, NASA and academia have been working together exploring new technologies for future commercial aircraft in the Subsonic Ultra Green Aircraft Research (SUGAR) programme.

One research area in the first phase of SUGAR in 2009-2010 was a preliminary analysis of an unusual-looking configuration called a trussbraced wing. A truss-braced wing features a high aspect ratio, which is to say a wing with a short chord (or distance between leading and trailing edges) and a long span.

A benefit of high-aspect ratio wings is low vehicle-induced drag, but their extended length means they tend to be prone to flexing in flight in response to aerodynamic forces, which can generate highspeed flutter.

A truss-braced wing gets around this issue by using the high aspect ratio with the truss, the struts attached to the fuselage belly from the underside of the wings to support the extended length of the ultra-thin wing and provide structural rigidity.

The initial study into a trussbraced wing configuration carried out in SUGAR Phase I, according to a 2015 Boeing research paper, “showed that these configurations have potential for reduced fuel burn depending on the weight and aerodynamic performance of the wing”.

Building on the initial studies, it was recommended there should be further work to research the technology in the SUGAR programme: what the Boeing paper called “concept refinement and higher-fidelity exploration”.

The SUGAR Phase I team, which consisted of Boeing Research and Technology, Boeing Commercial Airplanes, General Electric and Georgia Tech, as well as NASA, was expanded for Phase II to include Virginia Tech, NextGen Aeronautics and Microcraft to enhance technical capabilities and build hardware to support further tests.

The resulting wing was tested extensively in the wind tunnel at NASA’s Ames Research Center. Together with computer simulation/modelling and historical data and structural design work, the design evolved into a Transonic Truss-Braced Wing (TTBW) design.

The consequence was that although the truss-braced wing was initially tested at speeds of Mach 0.70–0.75, the configuration was tweaked so it would operate efficiently at a slightly higher cruise speed. The latest TTBW was tested at Mach 0.80, which, as Boeing notes, “is more consistent with the current speed of today’s jetliners”.

Boeing told AIR International: “The changes to the configuration are subtle, but important. By adjusting the wing sweep angle and optimising the design of the truss, researchers were able to enable the truss to carry lift more efficiently.

This allowed the vehicle to exceed the expected performance target. Previous TTBW designs were not able to take advantage of truss lift to the same extent due to limitations of the vehicle layout.” Boeing says the resulting research shows, “the TTBW has the potential to make future airplanes more aerodynamic and environmentally friendly”, with an aircraft using the latest iteration of the concept flying higher and faster than earlier concepts.

Boeing stresses the TTBW concept is still at the research and development phase, but adds: “The preliminary findings are very promising, and we intend to keep looking at this technology.”

NASA and industry have collaborated to explore new concepts for commercial aircraft and the technologies to make them possible in other areas. One result was SUGAR Volt, a concept for a hybrid-electric commercial airliner, which is another aspect of Boeing’s SUGAR programme.

This was to research a subsonic commercial aircraft concept with conventional underwing gasturbine engines and a ducted, Boundary Layer Ingesting (BLI) tailcone propulsor driven by a turboelectric propulsion system.

Aurora is also developing the D8, a commercial airliner design for the 150–180-seat market that uses composite structures, BLI and high levels of autonomy to provide up to 50% less fuel burn fleet-wide over designs currently in use. The D8 is being developed through the US Federal Aviation Administration CLEEN II and NASA New Aviation Horizons programmes and Aurora internal funding.