APRIL PROVED to be another busy month in the history of Australian military aviation, with the arrival in Canberra of the first Dassault Falcon 7X for the Royal Australian Air Force’s Special Purpose Aircraft squadron, and the announcement that five more Lockheed Martin C-130J-30 Hercules transports will receive a wideband SATCOM capability.

Significantly, the Australian Army Aviation Corps also deployed its Airbus Helicopters Tiger armed reconnaissance helicopter to Malaysia during April, marking only the second time the capability has been deployed overseas since entering service at the end of 2004.

The first of three leased Dassault Falcon 7X aircraft, A56-001 (msn 283), arrived in Canberra on April 16, 2019, following its delivery flight from Bordeaux, via the Falcon Jet completion centre in Little Rock, Arkansas.

The Falcons are replacing the smaller Bombardier Challenger 604s, which have been in service with 34 Squadron, the Royal Australian Air Force’s special purpose aircraft (SPA) or VIP squadron, since 2002.

The acquisition of the three Falcons is still yet to be acknowledged by the Australian government (which faced an election on May 18, 2019), despite the first aircraft being regularly sighted at airports around the country in the days after its arrival, as crew training ramps up.

Commander of the Royal Australian Air Force’s Air Mobility Group, Air Commodore Bill Kourelakos, told AIR International on April 30, 2019, that the second aircraft, A56-002, will be delivered to Australia in June 2019 and the third, A56-003, will follow in August 2019. The three aircraft have been leased for an initial ten-year period.

Air Cdre Kourelakos said: “The selection of the Falcon 7X was based on a comprehensive capability and financial evaluation of available commercial off-the-shelf aircraft options against capability needs. The evaluation considered the total cost of ownership against the following criteria: production availability, airfield accessibility, amenity, remote airfield operations, supportability and extended range operations.”

Air Cdre Kourelakos also said that there are currently no plans to reconfigure 34 Squadron’s two Boeing 737 BBJ aircraft as AIR International has previously speculated, but noted that the pair will undergo modifications to install a SATCOM system, beginning with the first aircraft in October 2019.

The leases of the two BBJs have recently been extended until June and September 2024.

The seventh Royal Australian Air Force Airbus KC-30A multi-role tanker transport, A39-007 msn 898, is currently having a VIP cabin installed after its conversion to the tanker role in Europe and will be delivered in late 2019. The aircraft will be operated by 33 Squadron at Amberley in the tanker/transport role, but will be available for longhaul SPA tasking when required.

The Australian Defence Force announced on April 29, 2019, that five more of its C-130J-30 Hercules fleet will be fitted with Honeywell’s JetWave Ka-band satellite system under the Royal Australian Air Force’s Plan Jericho, its vision for a networked, fifthgeneration air force.

One aircraft, A97-449, has had the JetWave system fitted since 2017 to trial wideband communications under operational conditions, and the decision to install the equipment on a further five aircraft will mean that half of the Royal Australian Air Force’s 12 C-130J-30 fleet will have the system.

Air Cdre Bill Kourelakos said that Airbus Australia Pacific will begin installation of the system on the first of the five aircraft during routine heavy maintenance at RAAF Base Richmond in late 2019. All five aircraft will be completed by 2022.

He said: “Crews and passengers can undertake complex mission planning en route to their destination, stream video of their mission back to headquarters or receive it from another node.

There’s significant potential for the Hercules to serve as a tactical command and control [C2] platform, combining its range and loiter capability with its ability to air-drop, or operate from austere airstrips …We have already demonstrated the utility of this system on one Hercules, streaming video from missions in the Pacific and allowing basic C² functions to be carried out from the aircraft.” 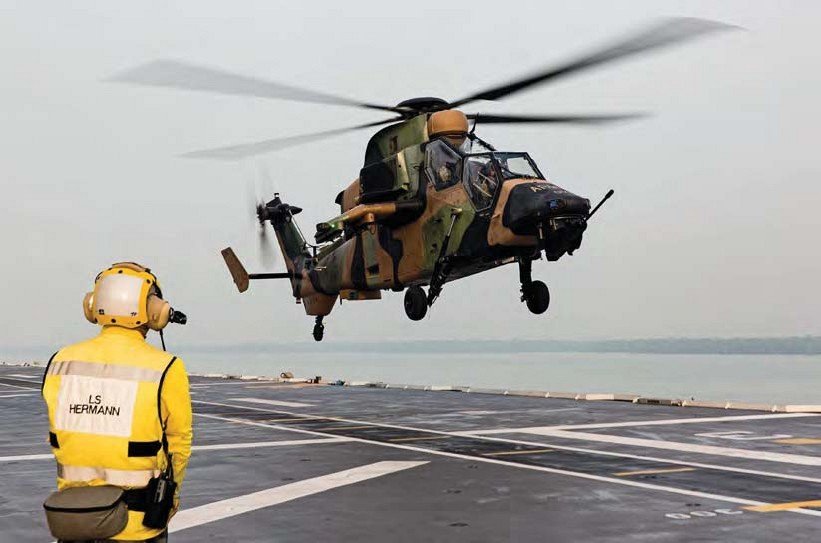 The Royal Australian Air Force Hercules fleet, operated by 37 Squadron at RAAF Base Richmond, has had a slower L-band SATCOM capability since 2015, but becomes the first operator to use Honeywell’s Kaband system on the aircraft.

After reassembly, the aircraft, from the Australian Army Aviation Corps’ 162 Reconnaissance Squadron, 1st Aviation Regiment based in Darwin, were embarked aboard the Royal Australian Navy landing helicopter dock (LHD) ship, HMAS Canberra, then alongside at nearby Port Klang.

HMAS Canberra is one vessel participating in Indo-Pacific Endeavour 2019, which is touring several countries in South-East Asia and the Indian subcontinent.

The deployment of the Tigers marks only the second time the capability has been deployed internationally in 15 years of operational service with the Australian Army, the first time being a deployment to Port Moresby for exercises with the Papua New Guinea Defence Force in 2015.

Their embarkation in Canberra follows the recent successful completion of firstof-class flight trials aboard the Navy’s LHDs and paves the way for Tiger’s integration into an amphibious Air Combat Element (ACE), alongside Army MRH 90 Taipans and CH-47F Chinook battlefield mobility helicopters.

Brigadier Steve Jobson, Commander of Army’s 16th Brigade, told AIR International: “The purpose of the deployment of the ARH Tigers is to develop an armed reconnaissance helicopter [ARH] capability as part of the Australian Army’s Plan Kestrel.

This is in preparation for Exercise Sea Series 19, where it is expected the Australian Amphibious Task Force, under Joint Project 2048, will receive final operational capability.

“The embarkation of the 1st Aviation Regiment detachment aboard HMAS Canberra facilitates the development of ARH interoperability with Australia’s two LHD ships and the deck landing and proficiency for the 1st Aviation Regiment aircrew. Additionally, the deployment will increase the deck landing proficiency of the HMAS Canberra crew, through their familiarisation with ARH deck operations.”

The four Tigers will remain aboard HMAS Canberra as the ship returns to Australian waters, where they will be joined by MRH 90 and CH-47F helicopters from Army’s 5th Aviation Regiment, for Sea Series 19. This latter exercise will represent the first time the Australian Defence Force has demonstrated ACE operations with all three of Army’s operational helicopter types and will culminate in HMAS Canberra’s participation in Exercise Talisman Sabre 2019, held off the coast of Western Australia in July.