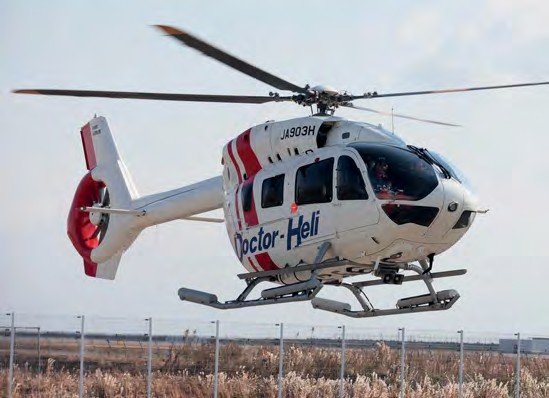 The first H145 in Japan, JA903H in the colours of the Doctor-Heli EMS network.

Also in December, Airbus Helicopters Japan announced that it had handed over the first H145 helicopter to the Aviation Operations Division of Hiratagakuen at its facility in Kobe.

The handover ceremony, held on December 19, also marked the first delivery of a H145 in Japan. The helicopter will be used by the Doctor- Heli network for emergency medical service (EMS) operations in the Nagasaki Prefecture from June 2018.

Hiratagakuen placed an order for two H145s at the Japan International Aerospace Exhibition in 2016 and the second is due to be delivered in September, also for use in the EMS role. The company already operates a fleet of 14 Airbus Helicopters H135s, the most recent delivered in September 2017, and has achieved in excess of 100,000 flights. Eleven of Japan’s prefectures will be covered by the combined fleet by 2018.

Hiratagakuen President Isamu Hirata said: “We are delighted to introduce the first H145 for EMS operations in Japan. The aircraft meets our needs perfectly and it will replace the H135 currently in operation in the Nagasaki Prefecture. As the EMS market continues to grow in Japan, we stay committed to supporting the safe deployment of doctor helicopters in the country.” Nigel Pittaway