Aircraft 39-8 airborne over some of the hundreds of islands along Sweden’s Baltic coast line.

Marcus Wandt is one of Saab’s test pilots based with the Flight Test Unit at Linköping, and the first pilot in the world to fly the Gripen E; he flew the type’s maiden flight on June 15, 2017.

Discussing the 38-minute flight, Marcus reflected: “Prior to the first flight, if someone had asked me how long it would take to start up and taxi off the line, and how many cautions would be presented before taking off, I would probably have said a couple of expected cautions and warnings, and something unexpected before taxiing out.”

Before the first flight, Marcus had been in the aircraft several times to conduct ground testing, and recalled how every start-up was the same with no malfunctions, cautions or warnings. He explained how during start-up, the aircraft performs a series of built-in tests, and but for conducting a series of test points during the first 20 minutes, the process would have taken a lot less time. His first impression of the aircraft running on the flight line was of good system and avionics stability. Then he recounted take-off: “During take-off, holding the brakes I could feel the thrust. Upon releasing the brakes, the aircraft more or less jumps away, it wants to go. The pitch-up command provided the rotation, which I’d not experienced before. I made an intentional smooth take-off to slowly build the angle of attack into the air intakes, but also to make sure the engine was working as intended under command of the flight control system function. I also wanted to prove the states and modes of the avionics were all correct. The take-off run and getting airborne went well.”

Marcus noted two things to be different from the Gripen C: “A lot more power and a difference in vibration because of the new landing gear, which remained extended for a long time. Climbing to 13,000ft, I checked the aircraft’s handling qualities with the landing gear down, before starting to manipulate the configuration. Despite remaining in the heart of the aircraft’s flight envelope, the jet was responsive and maintained smooth roll rates and low G manoeuvres.

“When commanded, the landing gear retracted smoothly, and more excitement followed when I commanded the landing gear to extend back down. As expected the gear in transit indication illuminated with all six lights blinking. It was a good moment when the landing gears locked and all the lights went green. It handled really well throughout the flight, and felt distinct and agile, like a Gripen should. We’ve flown a lot more since then and the handling is persistently good.”

As part of the initial envelope expansion, Marcus flew further missions pulling more G during turns, climbing to ever higher altitudes and flying at greater alpha, and he reports that each flight was good. These flights were all flown in a clean configuration. Flight with stores loaded followed.

According to Marcus, the various stores configurations made little noticeable difference to the aircraft’s handling, which he described as good if you have a very asymmetric configuration.

Asymmetric stores configurations come into being after a weapon is dropped or a missile is fired, or when the aircraft needs to be asymmetrically loaded before take-off. Stores is the term used for pylons, bomb racks, missile rails, drop tanks, bombs, air-to-ground and air-toair missiles, targeting and reconnaissance pods. To date, the Flight Test Unit has flown with pylons, bomb racks, missile rails, drop tanks, and air-to-air missiles. According to Marcus, the flight control system masks the presence of stores very effectively. He said: “In the simulator, we undertook robustness testing by trying to trick the flight control system that it had other stores loaded. The models looked really good, but the effect of the masking remained unknown until we got airborne with stores for the first time.

So far, the aircraft has behaved really well in the various stores configurations flown to date. You don’t notice heavy stores as much in the Gripen E. It takes good care of its weight, which is very important considering what we’re aiming to do with the aircraft.” 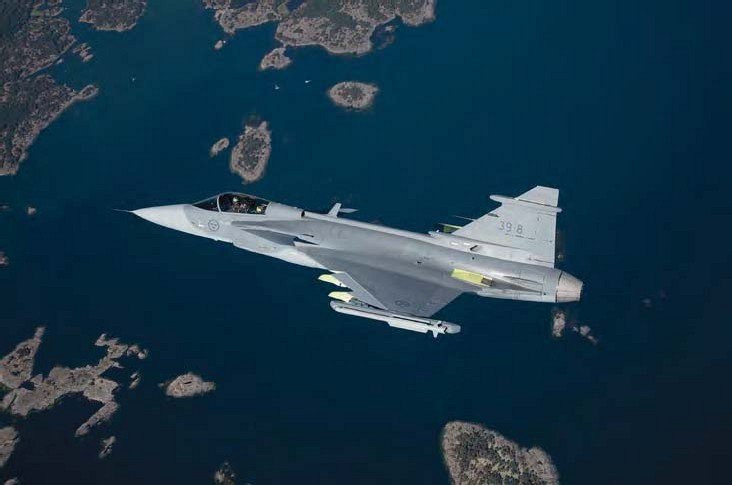 Aircraft 39-8 airborne over some islands along Sweden’s Baltic coastline loaded with a IRIS-T captive test vehicle on the port side wing tip pylon.

Aircraft 39-8 fitted with RUAG pylons prior to a captive carriage test flight.

Marcus attributes this to the additional power provided by the F414G engine, and changes made to the aircraft’s flight controls. He reckons from a test pilot’s perspective; the pilot really has to look for the differences. That is a good thing, but should something of specific interest become apparent, Marcus has the option to then fly a C model to compare.

With significant changes made to the aircraft’s structure around the more-bulky mid-fuselage and wing root, and with bigger pods on the end of the wings and atop the fin, it’s no surprise that the Gripen E tends to buffet, but according to Marcus any differences in the aircraft’s aerodynamics compared to the Gripen C are unnoticeable to the pilot.

Other big configuration changes on Gripen E are the landing gears, which differ from the legacy Gripen models. The nose gear has a single wheel, rather than two side-by-side, and the main landing gear legs are straight, rather than cranked, and are positioned further out from the aircraft’s centreline. Has this new configuration changed taxiing, takeoff, touchdown and the immediate rollout on the runway?

Marcus Wandt said taxiing is a little bit smoother than the legacy Gripen models, which tend to be a twitchy when the inputs are put in. Gripen E is nice and smooth: “During taxi, you can sense the damping is a little bit different, which is also noticeable at take-off rotation and when you land. It’s a very smooth landing in clean configuration and feels normal when the aircraft is heavier.”

Discussing performance of the F414G engine, Marcus said a lot of aggressive testing had been completed. This started with the aircraft tied down to an engine test facility for ground-based engine-out and restarts.

These involved the F414G engine being run up to afterburner and switched off, then when it’s spooling down to be relight after a few seconds to make sure it restarts. According to Marcus the engine is showing surprisingly good performance, and has given equally reassuring results when airborne. Detailing the test cycle, Marcus said: “During a long descent, cooling the engine off to near idle and then re-engaging afterburner for a few seconds before pulling it back to the idle, the engine has responded very well throughout those cycles.

To date, no airborne engine-out and restarts have been performed.

Per Sverker is a Gripen crew chief with the Flight Test Department. He is responsible for preparing Gripen E test aircraft for flight at Linköping. Per provided insight to Gripen E maintenance during a look around of aircraft 39-8.

Gripen is equipped with a ground crew panel for access to a bay housing the batteries, computers and radio systems.

The technician uses the bay to run tests on hydraulic systems, to conduct electrical tests, and to control fuelling, including choosing the fuel quantity required. The bay also houses the refuelling point, which is almost identical to and in a similar location on the side of the fuselage to the Gripen C’s refuelling point.

The main difference on the E is the refuelling point’s position which is to the left of the control panel (rather than below on the C-model), and a little higher off the ground.

Compared to Gripen C and D, Per reckons Gripen E is quite similar to maintain and features changes to make life easier for the ground crew. Aircraft servicing is one such process that’s easier thanks to an easy-to-reach inspection hatch, as is refuelling.

Because of the increase in height, the person refuelling the aircraft no longer has to stoop underneath the jet in order to reach the refuelling point. 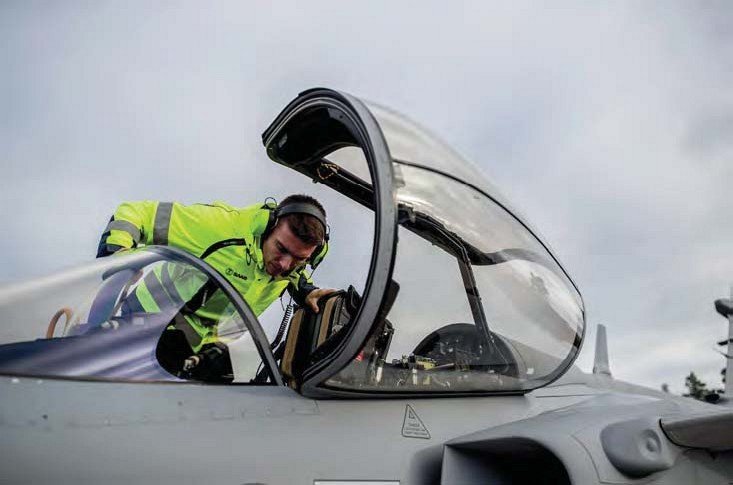 A crew chief assigned to Saab’s Flight Test Department looks into the cockpit of aircraft 39-8 prior to a test flight from Linköping.

Ground crew assigned to Saab’s Flight Test Department conduct an engine running refuelling of aircraft 39-8 at Linköping. The aircraft is loaded with two high-speed cameras for captive carriage test flights of the cameras. 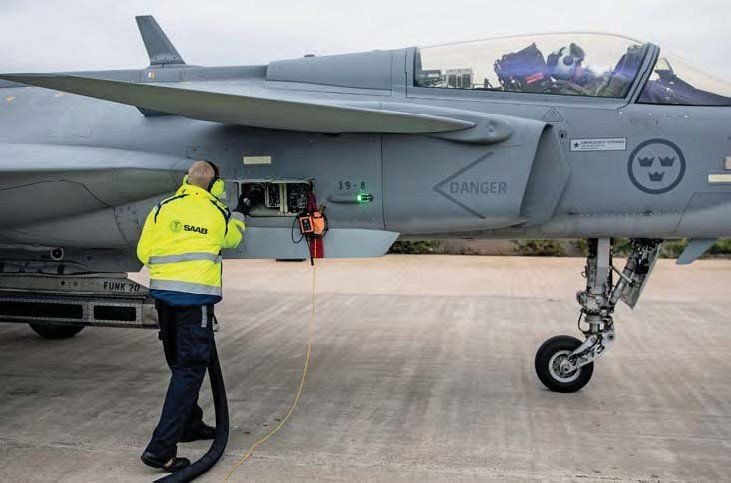 A crew chief plugs the fuel hose into the aircraft’s refuelling point located in the ground crew bay.

Working on the engine is as straightforward as the task can ever be. The arrangement and position of the engine’s gearbox and hydraulic system, and the auxiliary power unit are the same as the Gripen C, as are the positions of the engine mountings, one mount on the top and two each side.

Removing the mounting bolts and the underside hatch allows the engine to be lowered out of the aircraft, making an engine change a fairly quick process to complete.

Gripen can be refuelled between sorties while the engine is running, reducing the turnaround time. Ground procedures replicate those of a Gripen C. Saab followed a design concept to minimise servicing procedures to make the aircraft easy to handle for the technician. This is an important operational requirement for the Svenska Flygvapnet for meeting its various timing requirements, namely, start-up to taxi, fuelling, turnaround times and those required when operating from roads.

One feature that’s visually different on the aft fuselage of the Gripen E is an exhaust for the electronic, environmental control system. Gripen E requires additional cooling capacity to meet the demands of the ES-05 radar and the extensive avionics and electronic warfare suites. Consequently, the aircraft is fitted with a second cooling machine in the aft fuselage, in addition to the machine located aft of the cockpit. Access to the radar remains unchanged via similar hatches to those used on legacy Gripen C and D models; the difference is the new jet is equipped with the new ES-05 radar.

From a crew chief’s perspective, Per reckons the Gripen E is an aircraft that’s quite easy to work with.