Raytheon is the provider of the majority of the UK’s current intelligence, surveillance and reconnaissance platforms, in the shape of the Sentinel R1 and Shadow R1 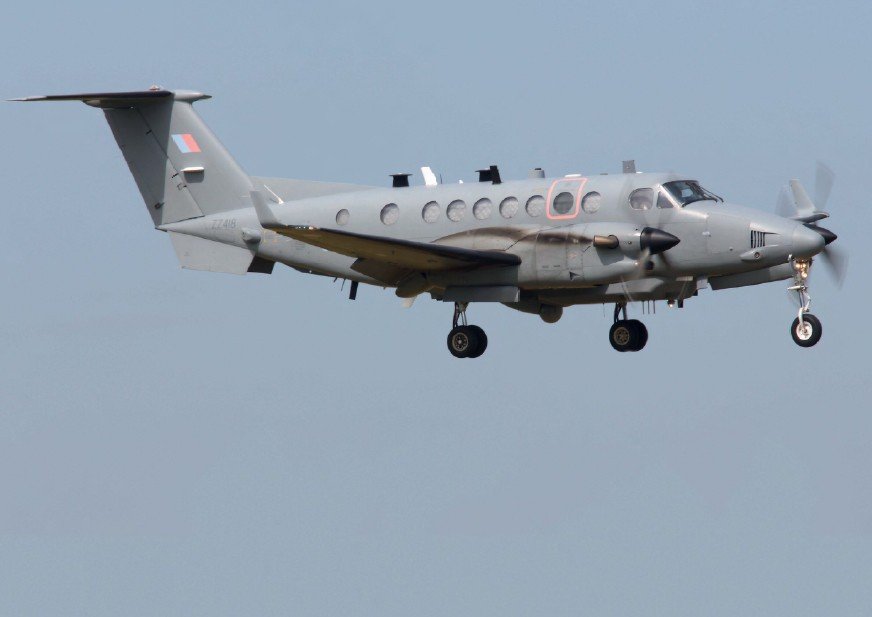 Perhaps better known for its radar and weapons programmes, US defence manufacturer, Raytheon is actively marketing tactical and strategic intelligence, surveillance and reconnaissance (ISR) solutions on platforms such as the Beechcraft King Air 350 and the Gulfstream 550 and Bombardier Global business jets. Raytheon is currently modifying two Gulfstream G550 aircraft for an unnamed customer and is in active discussions with at least three other customers from around the globe.

Speaking at the recent Paris Air Show, Raytheon’s Vice-President of Business Development, Space and Airborne Systems, Jim Hvizd, said the company’s special mission aircraft market share over the last five years has been a little over $2 billion and he sees the market growing at a substantial rate. He said: “We see an appetite across the globe to have mission systems that are capable of standing off further and able to conduct longer endurance missions. We see the market growing for the foreseeable future.

We’ve gone from our Sentinel programme to having two active production programmes currently underway and have active conversations with another three countries.”

Based on the Bombardier Global Express, the RAF’s Sentinel R1 fills a UK Ministry of Defence Airborne Stand-Off Radar (ASTOR) requirement. The aircraft entered service in 2008 and provides a long-range wide-area battlefield surveillance capability to provide critical intelligence and target tracking information to ground forces. Four aircraft are based at RAF Waddington with No.V(AC) Squadron.

According to Hvizd, the RAF’s Sentinel aircraft provide a major contribution to NATO and fly most days. In October 2016, Raytheon was awarded a £131 million contract to extend its contract to manage support services for the Sentinel programme until 2021, but recent reports suggest the capability will be axed to save money. As part of the UK’s 2016 Strategic Defence and Security Review, No.V(AC) Squadron was scheduled to reduce its fleet by one aircraft. Sentinel R1 ZJ693 (c/n 9132) entered local storage at Waddington in mid-May and was transferred to Hawarden on May 23 for storage. Five aircraft were procured.

The RAF has a layered approach to ISR and the tactical component is filled by another Waddington-based unit, No.14 Squadron, which operates five Shadow R1 aircraft, based on the Beechcraft King Air 350CER platform, in the intelligence, surveillance, target acquisition and reconnaissance role. A sixth (unmodified) aircraft is used for training, retaining its civilian registration marks. In 2015, it was announced the fleet would be increased from five to eight operational units, beginning in 2019. This fleet expansion will reportedly include two new-build aircraft and conversion of the training aircraft to operational configuration.

The Shadow entered service in 2009. Its mission system was designed and tested by Raytheon UK’s Airborne Solutions division. According to Hvizd, as a smaller aircraft with a shorter range than Sentinel, the Shadow is a little more flexible for manoeuvring at lower altitudes, which enables it to interrogate signals in a slightly different way. Hvizd did not detail what systems are fitted to Shadow or how they differ from those on the Sentinel. AIR International understands the Shadow system supports special forces more specifically, but not exclusively, in UK operations.

In addition to its range of advanced sensors, Raytheon has also developed an openarchitecture airborne mission management system known as Overseer. Hvizd claims the system builds on the success of the Sentinel and Shadow programmes, but is designed to integrate with other ISR systems and interoperate with a range of information exploitation systems.

He said: “The Overseer mission system is the heart of our architecture. More and more of our users are looking to have open flexible systems. Our customers are not looking to hire a single company for the next 40 years; they want to be able to take advantage of technology that becomes available, integrate that technology from a number of sources, and then be able to enhance their solutions without necessarily having to totally rearchitect them.”

Hvizd stressed that Overseer is not platformcentric and Raytheon will tailor the solution to an individual customer’s requirement: “We are not focused on any single platform, but we look at the platform as a mechanism to carry an actionable intelligence system around. We have relationships with many of the prime contractors, from small tactical aircraft to larger business jets, and we really seek to size a solution that best serves the customer’s requirements.”

Hvizd said he expects single digit, but significant growth in the ISR special mission aircraft market over the next couple of years at the least: “Right now we’re not only involved in the Sentinel programme; we have another production programme in which Raytheon is configuring a Gulfstream 550 with mission systems for an unspecified customer, and we’re in active discussion with two other countries who each have similar architectures for their unique needs. One of the things we see is that each country has very distinct needs for things such as indigenous participation, so we need to get local content into the architecture.”

Hvizd also says Raytheon is working with Bombardier to develop an ISR solution based on the Global 6000 for a couple of customers. As far as further sales are concerned, he points to the Middle East, where he says the company has a key relationship with a partner nation in the region; but he also points to Asia, where Raytheon has active conversations underway, and to the United States, where the discussions involve customised architectures: “In the USA, if you look at the programmes of record, there really isn’t one similar to the requirements of the UK’s Sentinel.”

In addition, Hvizd said Raytheon has a significant interest in maritime ISR and noted that the company is studying how it can enter that sector. He said Raytheon is looking at ways to integrate a maritime capability in its own synthetic aperture radar and ground moving target indication solutions, and further integrate those into various platforms that serve in the maritime environment, utilising both the King Air and business jet platforms.