The GlobalEye airborne early warning aircraft was unveiled at Linkoping, Sweden on February 23, in the markings of the United Arab Emirate Air Force.
Saab

“IT’S A wonderful aircraft, the first swing role surveillance system”, exclaimed Saab’s Matts Wicksell, Saab’s GlobalEye programme manager. He was talking after the curtain was drawn during a ceremony at Saab’s Linkoping facility on February 23. It marked the arrival of the company’s thirdgeneration airborne early warning (AEW) aircraft.

The much modified Bombardier Global 6000 aircraft wears the markings of the only GlobalEye customer to date, the United Arab Emirates Air Force (UAEAF), the first of three on order. The type will now move into the ground test phase, before entering its flight test programme. Just when that’s all going to happen remains a closely guarded secret, because Saab is unable to reveal details of the first flight and flight test programme due to customer sensitivities.

Then in February 2017 at the International Defence Exhibition in Abu Dhabi, the UAEAF announced an order for another GlobalEye worth $235 million. 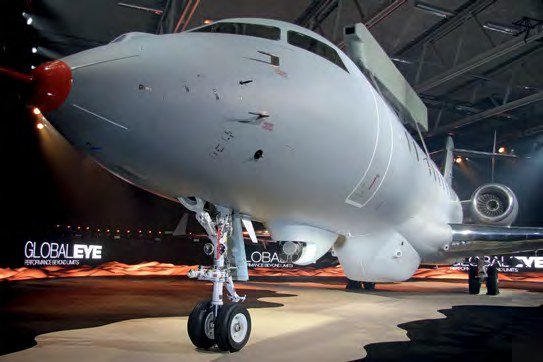 Close up of the Star Safire 380HD targeting system and the Seaspray multimode radar.
Alan Warnes

Saab labels its third-generation AEW aircraft as a swing role surveillance system, with endurance of 11 hours. The initial contract includes the full establishment of everything needed to operate the systems, security, preparations incountry, training and spare parts.

Lars Tossman, Head of Saab’s Airborne Surveillance system, said: “AEW&C [control] aircraft usually only cover the air threats, but with GlobalEye you can monitor the sea and land domain. We have added a maritime patrol aircraft radar, electrooptics and a full electronic warfare suite all fused into a new command and control system.”

Wicksell told the media: “We can see extremely small subjects, like rib boats and jet-skis, and in the air we can see stealthy targets at a greater distance.”

Such capabilities have been made possible because of an S-band active electronically scanned array Erieye ER (Extended Range) multimode radar mounted on top of the airframe.

Other sensors integrated with the Erieye ER are the Leonardo Seaspray maritime radar (believed to be the 7500 multimode system, but Saab wouldn’t confirm this) and the FLIR Systems Star Safire 380HD electrooptical/ infrared targeting system. For the surveillance mission, the jet must descend to around 5,000ft. The maritime radar can track up to 300 targets, while the Star Safire 380HD allows operators in the rear cabin to focus on the targets of interest.

Unveiling GlobalEye marks a third-generation of Saab’s lineage of AEW systems. When it all started back in the mid-1980s, the requirement was a gap-filler for surface radars, extended early warning and mobility. The solution was, Dr Frederic Wiessey, Saab’s Head of Research and Technology, Saab Surveillance said, an “elevated radar, a tall mast”, which in this case was the Saab 340 fitted with an Erieye mission radar from Saab (formerly Ericsson) Microwave Systems and designated FSR 890 by the Flygvapnet (Swedish Air Force).

Then came a need to focus on different threats, those that are extremely dificult to detect, such as helicopters and small light aircraft, which led to an autonomous operating system. The solution was deemed as integration of a completely new command, control and communications mission system. Subsequently, the FSR 890 system was upgraded, so that the smaller and slower targets could be detected.

Finally, a third increase of threat detection involved land and seaborne targets in addition to airborne targets, and in particular from greater range so as to increase warning and reaction time.

To meet the new requirement, Saab integrated and fused the Seaspray multimode maritime radar and the FLIR Systems Star Safire 380HD targeting system into the Erieye ER mission system. Tied and fused together, the Erieye ER not only enables the operator, to search further, but also to reach an operating area faster thanks to the high-performance Global 6000 business jet, and to loiter for longer periods before reaching bingo fuel state and the need to return to base. The GlobalEye is born.

Under Project Dolphin, the UAE is also acquiring two Global 6000s as electronic intelligence surveillance platforms, which are currently with Marshalls of Cambridge having their new systems integrated. This variant is also extremely sensitive system, but unlike Saab, neither Marshalls nor any of its subsystem suppliers has oficially commented on it.

In a recorded message presented to the assembled media, Major General Staff Pilot Ibrahim Naser al Alawi, Chief of Air Staff , UAEAF, said: “The GlobalEye is a strong force multiplier. It is governed in three different dimensions: air-to-air, air-to-sea and air-to-ground. The UAE is a country with a long coast line and plenty of air space. The future needs early warning radars which are capable of detecting ballistic missiles.”

Saab has been testing the active electronically scanned array Erieye ER radar set-up on the ground at its Gothenburg facility for some time. The company says that although the new radar fits in the same space in the over-fuselage housing as the earlier version of the radar, the use of new technology – particularly gallium nitride transmit/receive modules – increases the radar’s detection range by 70% to a horizonlimited capability of 216 nautical miles (400km).

Saab said: “This first aircraft is equipped and being prepared for ground and flight trials to gather aerodynamic data as part of the ongoing development and production programme. It has the ability to detect low-observable air targets in heavy clutter and jamming conditions and also can detect and track maritime targets out to the elevated horizon and small jet-ski or rib-sized vessels at very long distances.”

No delivery timetable has been announced for the three jets.

Saab acquired two vanilla Bombardier BD-700-1A10 Global 6000s on behalf of the United Arab Emirates. Global 6000 registered as SE-RMY (c/n 9714), formerly C-FIPT, and SE-RMZ (c/n 9743), formerly C-FLGD, were both registered to the company in 2016, on February 17 and July 15 respectively. On December 28, 2016, they were both re-registered to General Headquarters, United Arab Emirates Armed Forces, Abu Dhabi, with Saab AB, Linköping being shown as the holding organisation. SE-RMY arrived at Linköping on February 21, 2016 and SE-RMZ on August 15, 2016. A third, newer example, SE-RMU c/n 9787, the former C-FSYV, was registered to Saab AB, Linköping, on August 24, 2017, and is still registered to the company. It was delivered to Linköping on September 1, 2017, and, like the earlier two machines, started its journey at Peterborough Airport, Ontario, Canada. The aircraft unveiled to the press in February bore no identifying marks, but is believed to have been SE-RMY.

The green jets undergo extensive airframe strengthening in Sweden after arriving from Canada. The fuselage needs to support the weight of the approximately 1-tonne radar mounted above it. Other modifications to the basic airframe, performed by Saab by virtue of having obtained a supplemental type certificate, include the addition of wingtip-mounted Saab electronic support measures/ electronic intelligence pods, a SATCOM and antennas for various datalinks, IFF/ADS-B and voice communication radios. The tailfin is extended and the empennage redesigned with the addition of vertical strakes to the horizontal tail surfaces and a radar warning receiver, part of a self-protection suite comprising laser and radar warning receivers coupled with countermeasures dispensers.

The crew comprises two pilots and up to nine systems managers in the main cabin, which is fitted with five operator workstations. There is also a rest area with four seats. Data gathered can either be processed in the air or transmitted by datalink to a ground station.

Earlier versions of the Erieye radar, on either Saab turboprops or Embraer jets, serve with Brazil, Greece, Mexico, Pakistan, Saudi Arabia, Sweden Thailand and the United Arab Emirates itself. It is not known whether the UAEAF will operate the earlier system, mounted on Saab 340s, alongside its new acquisitions or divest itself of them. Given that the old and new Erieye radars can be accommodated in the same housing, they could be updated by replacing the legacy system with Erieye ER.

GlobalEye is not to be confused with the two Global 6000s being modified by Marshall Aerospace and Defence Group at Cambridge International Airport, England, for unspecified special mission work. That programme is believed to be aimed at providing the UAEAF with signals intelligence capability.