The proudly Scottish airline Loganair is again flying under its own name. Mark Broadbent reports

September 1 saw a fresh start for Loganair, when the carrier once again fiew under its own name after 24 years operating for other airlines under franchise partnerships. Between 1993 and 2008 it fiew for British Airways and then from July 2008 for Flybe.

The franchise with Flybe ended on August 31 and the newly re-independent Loganair’s first flight the following day under its own colours and LC flight code was operated by Saab 340 G-LGNG (c/n 302), named Spirit of Harris, between Islay and Glasgow.

The aircraft sports Loganair’s new tartan livery, which refiects not just the carrier’s roots but also confidence in its future as an independent regional operator.

Loganair’s route network mainly consists of services in Scotland. It serves Glasgow, Inverness, Aberdeen, Edinburgh, various points in the Western Isles (Benbecula, Barra, Tiree, Islay and Campbeltown), Kirkwall in the Orkney Islands, Stornoway in the Outer Hebrides and Sumburgh in the Shetland Islands.

The airline also operates an inter-island shuttle in the Orkneys, starting and ending in Kirkwall and routing through Westray, Papa Westray, Eday, North Ronaldsay, Sanday and Strondsay.

This shuttle includes the world’s shortest commercial airline flight. The hop between the neighbouring islands of Westray and Papa Westray, according to the current winter 2017/18 schedule, takes just two minutes to fly. Sometimes the flight time is closer to 60 seconds.

The shuttle is a Public Service Obligation (PSO) route, as are the flights out of Glasgow to Barra, Campbeltown and Tiree and Stornoway to Benbecula. A PSO is a European Union legislative mechanism which can be used by EU member states to ensure an air service to a community is maintained for economic and social reasons, even though the service may not be commercially viable. Croatia, Finland, Ireland, Italy, Greece and Spain are other EU members with PSO routes.

At Glasgow, one of Loganair’s key hubs on its network of routes around Scotland, Saab 340 G-LGNG (c/n 302) was greeted by bagpipes at the end of the carrier’s first flight as an independent carrier again.
All photos Loganair unless stated

Loganair doesn’t operate exclusively within Scotland however. It has 12 flights a day (six to Glasgow, three to Inverness and three to Norwich) from Manchester, which with 25.6 million passengers in 2016, is the UK’s thirdbusiest airport by passenger numbers behind Heathrow and Gatwick.

Contract flying is another part of Loganair’s operations. Four aircraft are used to transport workers from oil and gas companies operating in the North Sea, and there’s an agreement with the Royal Mail until early 2022 to fly mail from East Midlands Airport (where there’s a major Royal Mail hub) to Inverness, on the services between Aberdeen, Edinburgh and Inverness, and the

The trend in the European airline industry for many years has been for larger network carriers to divest routes with marginal passenger demand, however just because such services are unsustainable for a larger airline doesn’t mean they are for a smaller operator and this creates openings for independent carriers.

Loganair Managing Director Jonathan Hinkles told AIR International: “Those kind of opportunities, where airlines are providing a limited service or [there’s] no service but there’s demand for it, is the kind of thing we’re focusing on pretty heavily.”

The carrier’s Manchester services and the Edinburgh-Isle of Man route are examples. So too is the new route, which started in October, between Norwich and Durham Tees Valley. Together with the existing Durham Tees Valley-Aberdeen connection, this service is meant to tap into the travel demand between East Anglia, the Tees Valley and Aberdeen which exists because of the offshore energy industry uniting these areas.

Hinkles said this type of selectivity, finding little pockets of demand that are underserved or not served at all, is driving the ‘new’ Loganair. The focus is on finding, he said, the business model that we have: smaller aeroplanes, higher frequency”.

He said: “Anything we do will be driven by the fact there’s a customer demand for a service or product. What we’re not about is just going into markets for the sake of it irrationally or illogically.”

Finding niches is also prudent because of the competition posed by low-cost carriers. Hinkles said: “Going up against Ryanair or easyJet would not be a logical or sensible thing to do. If they are serving a route three or four times a day then there is no way there would be space for us to enter that market.”

Sensible network planning is a must for small independent airlines like Loganair but brand recognition is important too.

Despite 24 years of its aircraft operating in other carriers’ colours, Hinkles said: “There’s still a lot of affinity and knowledge of Loganair. We’re finding very clearly that people still know and recognise the name.”

He claimed there’s “a huge support base in the Highlands and Islands for what we’re doing”. A positive reaction from Scots about the return of the Loganair brand perhaps isn’t surprising, but apparently the recognition 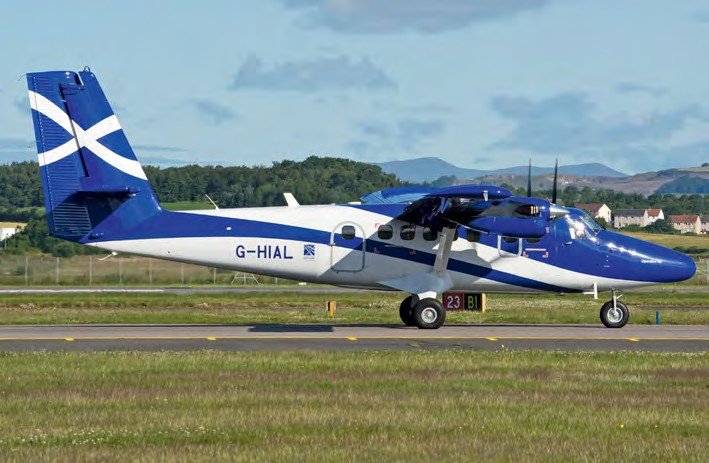 Twin Otter Series 400 G-HIAL is one of the aircraft owned by Highlands and Islands Airports and used by Loganair to operate on Public Service Obligation routes.
Ray MacFadyen/AirTeamImages

Hinkles said: “In some of our other markets we’re seeing a good build [of traffic]. We’ve seen a tremendous influx of bookings from the Manchester area. Turning the clock back 25 years, Loganair was a big operator at Manchester. There are people in that market who remember the name.”

Such recognition is beneficial but Loganair has nevertheless introduced a brand which unashamedly plays up to the airline’s Scottish identity.

Along with the tartan tailfins the aircraft also bear the slogan Scotland’s Airline, staff uniforms and seat headrest covers have multicoloured Harris tweed patterns and complimentary Tunnock’s caramel wafer bars, made in Glasgow, are served to passengers.

Hinkles believes the new brand can only be an advantage: “Some people say, ‘you’re too Scottish’. But Aer Lingus paints its aircraft green and put a shamrock on the tail and no-one criticises them for being ‘too Irish’. If you’ve got a national identity, it’s right and logical to use it.”

A significant development in this area in September saw Loganair becoming a founding member of the new Worldwide by easyJet initiative. This “global airline connections service” involves easyJet selling tickets on behalf of the scheme’s partner airlines to give travellers choice over their connections. The other partner airlines are currently Norwegian, WestJet, Neos, Aurigny, La Compagnie and Corsair.

Loganair also has an expanded codeshare with British Airways which allows BA customers on flights from Heathrow to Inverness, Edinburgh, Glasgow and Aberdeen to fly on Loganair’s Highlands and Islands services from those airports, and a new codeshare with sister company BMI Regional (both airlines are owned by AIL Group) on routes from Aberdeen, Edinburgh and Manchester.

These partnerships matter for Loganair for a couple of reasons. Firstly, they simply boost awareness of the carrier among a greater number of travellers. When Loganair’s membership of Worldwide by easyJet was announced, Hinkles commented: “We expect it to lend strength to Loganair’s sales efforts in markets where easyJet has a strong presence but our brand may not be well recognised.”

More crucially they broaden Loganair’s potential customer base and therefore the level of feed onto its services. For example, easyJet says its website has had 360 million unique visits in the last year.

Hinkles said: “The introduction of such a well-known name also selling stand-alone tickets for travel on the Loganair network vastly improves our distribution capability by promoting the Loganair name and network to a worldwide audience.”

The importance of these partnerships is underlined by Loganair’s erstwhile franchise partner Flybe, the UK’s largest regional airline, recently strengthening its Scottish presence with a five-year joint revenue and risk-sharing agreement for Eastern Airways to operate four turboprops for Flybe on services from Sumburgh to Aberdeen, Edinburgh and Glasgow.

The Twin Otters are the latest DHC-6 Twin Otter Series 400 variants from Viking Air. Two of the aircraft, delivered in 2015, were acquired by Highlands and Islands Airports to be operated by Loganair specifically for the PSO routes and their short take-off and landing performance and ruggedness makes them ideal for these services.

The Saab 340s are undergoing a cabin refit which involves installing lightweight seats to improve passengers’ legroom, re-covering all interior panels to reduce vibration, introducing soundproofing between the interior panels and the fuselage to improve cabin acoustics and installing LED lighting.

Loganair will continue using these aircraft, the Dornier 328s and the Saab 2000s for the time being, Hinkles said, but he added: “I think there will come a point where we have to upsize aeroplanes, simply due to economics and the fact that nobody is building 30-seat turboprops any more.

“The longer-term plan is re-fieeting with a single type of aircraft and then we get some good commonality benefits for pilot training, engineering [and] ground equipment. That’s something we’re looking at with a keen degree of interest.”

That’s for further ahead. Right now, a major focus for all airlines in the UK is coping with the impact of the fall in the pound’s value over the last 18 months. Hinkles explained: “For an airline which buys a lot of its maintenance and spare parts and insurance in dollars, those commodities became 30% more expensive. It has a very big impact on your cost base when you are a regional operator which earns the vast majority of its income in sterling.”

The pound’s value has rebounded from the low it fell to in 2016 but it is still down on where it was in 2015. With negotiations continuing over Britain’s exit from the EU and the UK Government recently confirming it is seeking a two-year transition period after Brexit, wider macroeconomic factors are likely to continue to loom large for the UK’s airlines.

Hinkles observed: “All we can do is what we have done, which is try and make sure we’re running our business as efficiently as we can and watch our operating costs. It’s not easy.”

Which is exactly why establishing Loganair in consumers’ minds, growing the distribution network and making prudent route development choices will remain high on the agenda for Loganair as it continues to fly solo. 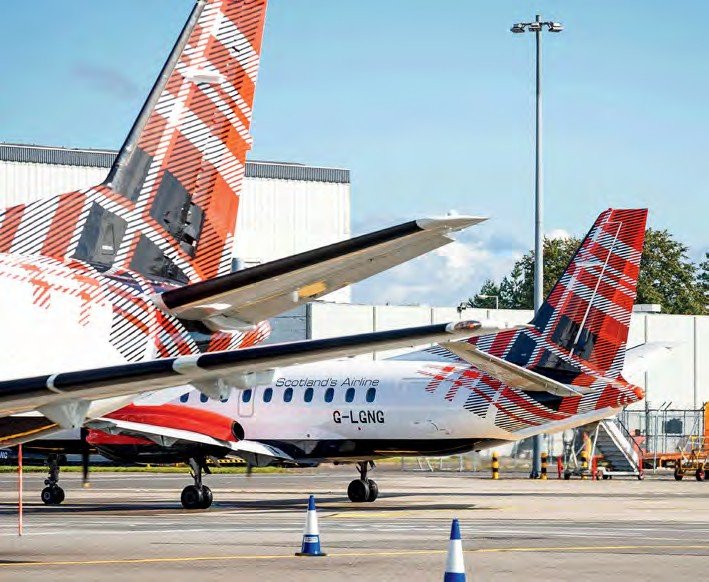 Loganair believes emphasising its Scottish identity gives it an advantage on the marketplace.

A new ticket distribution agreement with easyJet, one of whose A320s is in the background in this shot of a Saab 340 at Glasgow, is a partnership Loganair is hoping will help establish its market presence.