Every year in May, at the HeliRussia exhibition in Moscow, the Russians sum up the situation in their rotorcraft industry: and the situation is not good. Production volume is dropping for the fourth year in a row and there are no signs of improvement in the future.

All the production facilities in Russia built a total of 189 helicopters last year, 11% less than in 2015. Russian Helicopters Chief Executive Officer Andrey Boginsky promised that, in 2017, the output would increase to 220 helicopters.

The greatest collapse in 2016 affected the main product of the Russian rotorcraft industry, the Mi-8 transport helicopter produced by Kazan Helicopters and the Ulan-Ude Aircraft Plant.

Detailed data was not revealed, but the production volume of the Mi-8 in 2016 can be estimated by the plant’s income. Kazan Helicopters earned RUB 25.3 billion in 2016, half of the previous year’s income of RUB 49.1 billion. The Ulan-Ude plant earned RUB 30.6 billion compared to RUB 50.8 billion in the previous year.

It can be estimated that in 2016 about 100 Mi-8 helicopters of all versions were built, compared to about 150 in 2015 and around 200 in each year dating back to 2011. What is worse, all large contracts for Mi-8 helicopters have already been or will soon be completed and the new contracts involve much smaller numbers of the helicopter. 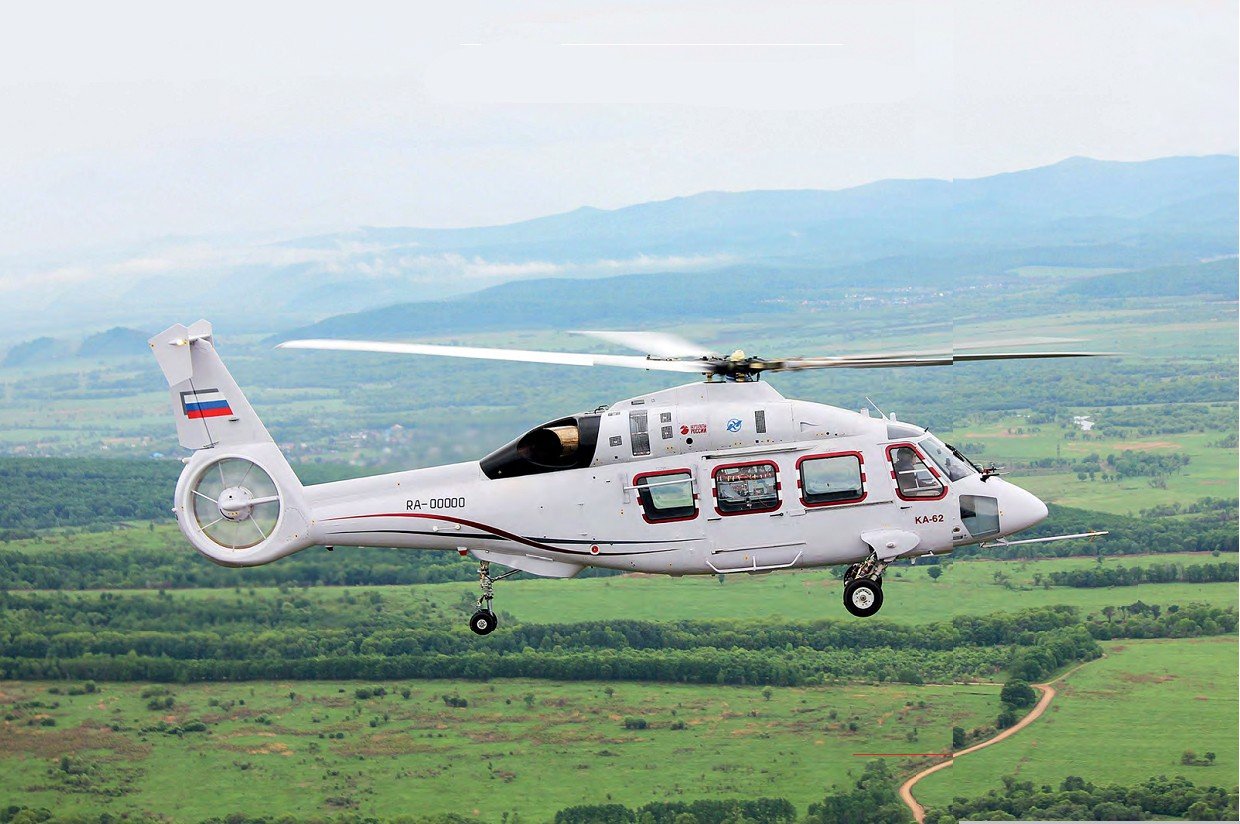 Coinciding with HeliRussia was the first flight of the Ka-62 4,000 miles away at Arsenyev in the Far East of Russia. The flight was made at a speed of up to 59kts (110km/h) and altitude up to 1,000ft (300m).
Russian Helicopters 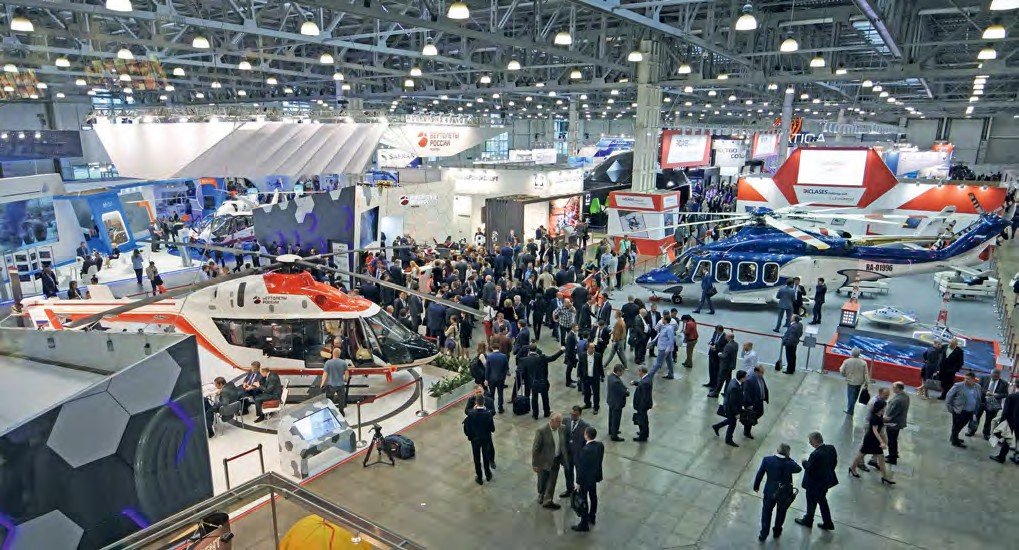 A general view of the HeliRussia 2017 exhibition hall, with an AW139 and Ansat visible.
All photos Piotr Butowski unless noted

The purchases of foreign helicopters by Russian users are also declining. In 2015, the Russians bought one-third of the quantity they’d purchased the previous year (36 helicopters compared to 121 in 2014) and in 2016 a further decline took place, to just 30 helicopters. Half of these were light Robinsons, popular among private users. Airbus Helicopters delivered 11 helicopters to Russian users in 2016, the same as in previous years.

In carrying out the National Armament Programme for 2011–2020, since 2011 Russian Helicopters has delivered 600 helicopters to the Russian Ministry of Defence (MoD). This number is expected to reach 1,000 by 2020, but as Russian officials noted, contracts for helicopters for the Russian MoD will have been completed by about 2020 and the next contracts will be smaller.

Therefore, said Sergey Yemelyanov, director of the aircraft industry department in the Russian Ministry of Industry and Trade, Russian Helicopters has become seriously focused on the offer for the civilian market and is seeking new markets abroad. It is preparing two entirely new projects for the civilian market.

This programme was launched in 2015, after the Ministry of Industry and Trade and Russian Helicopters on September 12, 2014, closed the PSV (Perspektivnyi Skorostnoy Vertolyot) future high-speed helicopter programme due to an “inability” to achieve the required low cost of operation and performance. 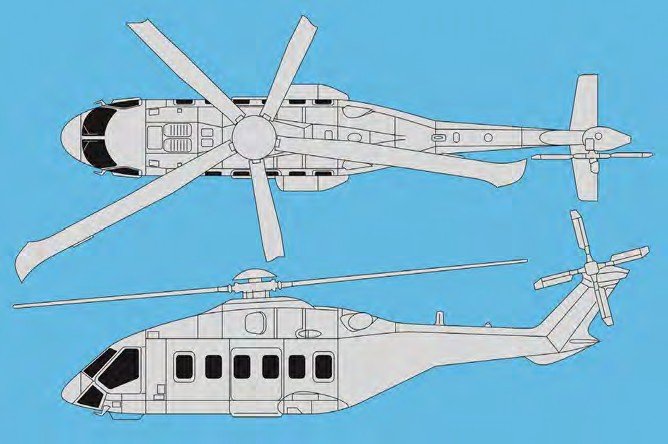 The PSKV is the projected future replacement for the Mi-8. The Russians plan to spend RUB 45.6 billion for the entire PSKV programme during 2016–2024. 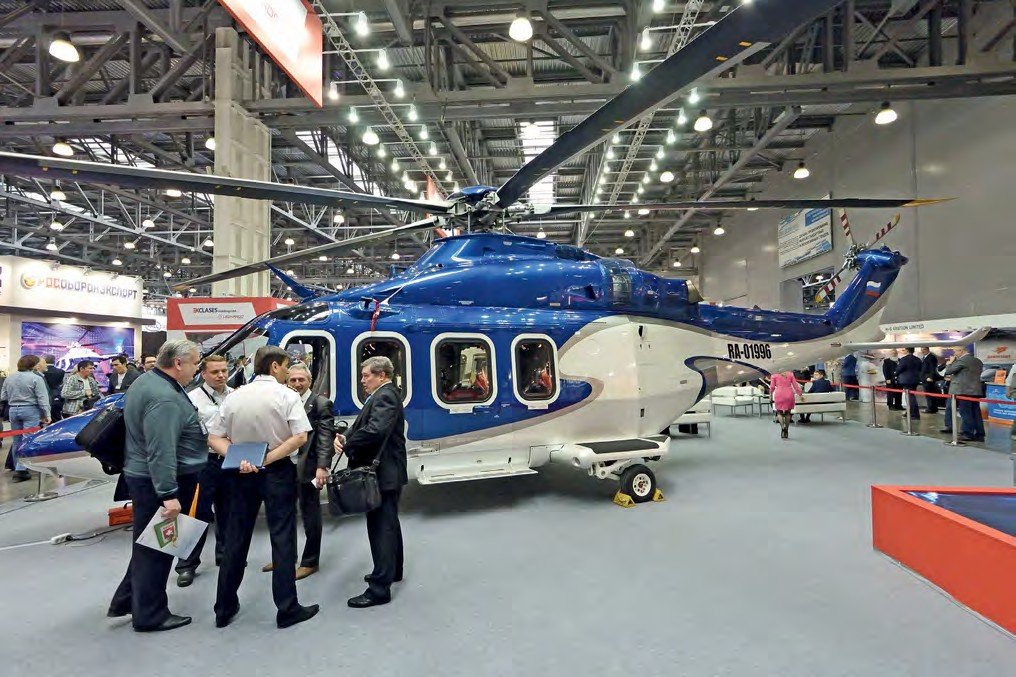 One aircraft on show at HeliRussia was AW139 RA-01996, the first helicopter of this type assembled in Russia.

”There are countries that prefer the helicopter with French engines,” and the presence of French engines expands the circle of potential customers.

According to Russian Helicopters’ plans, production of the LMV is to begin in 2020–2021 at the Ulan-Ude plant. This helicopter will have a coaxial configuration with two three-blade rotors, a short twin tail and landing skids. The goal is to obtain low noise and vibration levels. The powerplant will be one engine of an unspecified type and the helicopter will have a spacious cabin for five people and a luggage compartment.

The LMV is currently at the technical design stage. The Russians have little, if any, experience with light helicopters. In Russia, light helicopters are classified as the Ansat and Ka-226 and the old Mi-2, all of which have a take-off weight of 3,400- 3,600kg (7,496-7,937lb). The previous attempt to develop a light helicopter, the Mi-34 which weighed 1,450kg (3,197lb), failed, despite several attempts at restarting the programme.

The most important event during HeliRussia 2017, although it took place 4,000 miles (6,400km) away, was the maiden flight of the Ka-62 helicopter, made at Arsenyev in the Far East of Russia, on May 25, the opening day of the exhibition.

A special conference was dedicated to it, with a video link used to connect with Arsenyev. The director of the plant, Yuri Denisenko, informed the audience the Ka-62 had flown at 10:30hrs with Vitaly Lebedev and Nail Azin at the controls, and spent 15 minutes in the air. The flight was made at a speed of up to 59kts (110km/h) and altitude up to 1,000ft (300m) without any problems. There are further two Ka- 62s at various stages of completion in the plant.

The programme to develop the military Ka-60 helicopter and its civilian version, the Ka-62, was launched as early as 1984. Two prototypes were built, the first of which flew in December 1998. In 2011, Russian Helicopters decided to resume the Ka-62 programme in an entirely new configuration with French Ardiden 3G engines and gears and transmissions made by Austrian Zoerkler Gears GmbH. The new Ka-62 made its first hover flight on April 28, 2016, but the trials were suspended for over a year as the first hover flight revealed problems with reduction gears and systems. Alexander Vagin, the Ka-62’s chief designer, said at HeliRussia: “During the previous year we did much work on the ground and test benches.” 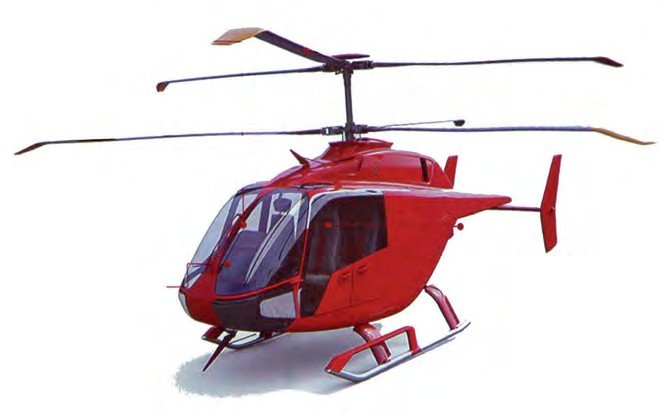 Another new Russian rotorcraft development project is the LMV light helicopter, which is currently at the technical design stage. 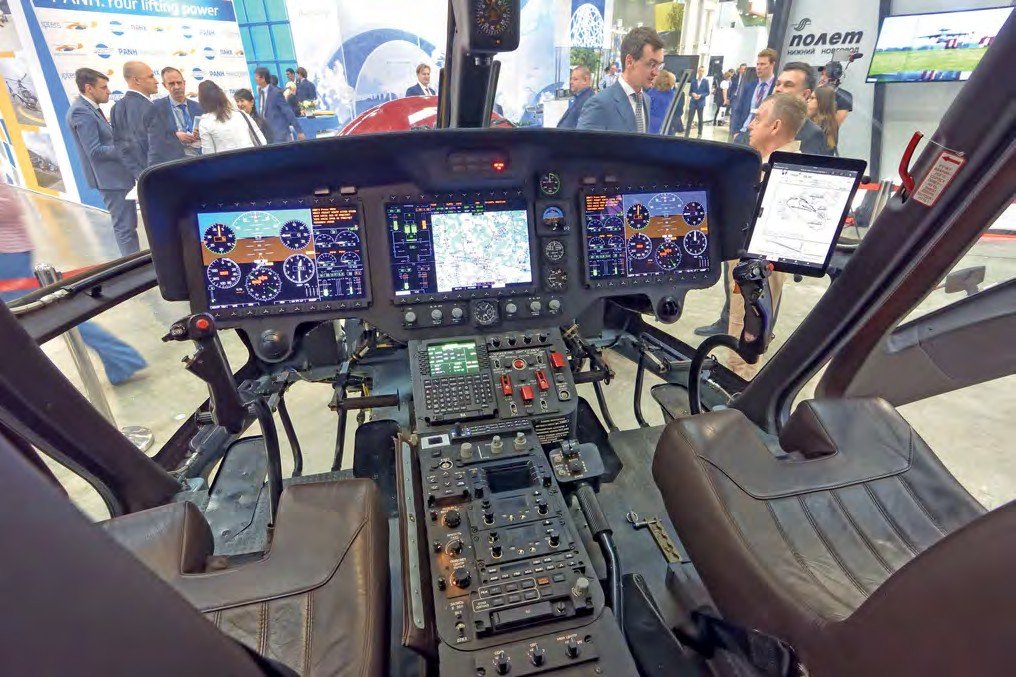 A view of the cockpit of the Ansat, one of the few light helicopters developed by Russian industry

The Ka-62 is going to receive the basic Russian AP-29 certificate (similar to CS- 29/FAR 29) in 2019 and then the European Aviation Safety Agency certification process will begin. Deliveries will begin in 2020. Boginsky sees the place for the Ka- 62 with oil and gas industry companies for offshore transport. He said: “We are talking with Gazprom, Gazpromneft and Rosneft.”

The manufacturers are aware of strong competition from the AW139 and AW189, but count on some advantages of the Ka- 62: spectacular characteristics in hot and high conditions, the possibility of operation in extreme conditions without hangars and a high level of safety.

However the Russian MoD, which was to be the first and main customer, might not buy a helicopter with French engines and Austrian gearboxes. Furthermore, civilian customers in Russia have already made their choice: they have ordered similar AW139 and AW189 helicopters.

On December 29, 2014, the Rosneft oil company and Rostech Corporation (to which Russian Helicopters belongs) signed a strategic partnership agreement with Leonardo (formerly Finmeccanica). One of the elements of this partnership was to be the purchase of 160 AW189s by Rosneft by 2025. In July 2015, Rosneft ordered ten AW189s to be delivered directly from Italy. The initial two helicopters were received in spring of 2017.

Further production for Rosneft was to be gradually located in Russia. However, due to the slump of oil prices and decrease of investments in mining industry caused by it, this programme has been suspended. Potential production of AW189 in Russia will depend on real orders.

An earlier programme to assemble AW139s at the specially established Russian-Italian Helivert plant at Tomilino near Moscow is at a standstill. Since it began in December 2012, only six helicopters have been assembled. Now the Tomilino plant is adapting its activity for the new situation and focuses more on servicing Leonardo helicopters operated in Russia. AW139 RA-01996 was present at HeliRussia 2017, the first helicopter of this type assembled in Russia.

Also on display at the exhibition was a Bell 407GXP assembled in Russia at the Ural Works of Civil Aviation (UWCA) in Yekaterinburg. Under the contract signed at HeliRussia 2015, the UWCA plant began assembling individual Bell 407GXPs for specific orders. The first helicopter was delivered to the civilian helicopter pilot school at Omsk – the only such facility in Russia – in December 2015 and another was delivered to the same operator in 2016.

In January 2016, UWCA signed an agreement with Airbus Helicopters regarding the assembly of H135 helicopters for Russian customers; the programme is to be launched in 2017.

UWCA will only assemble the helicopters of large components; the locating of either H135 or Bell 407 production in Russia is out of the question.