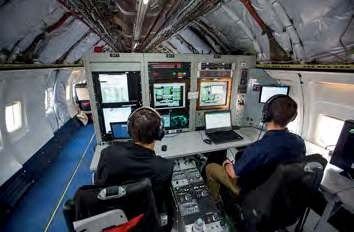 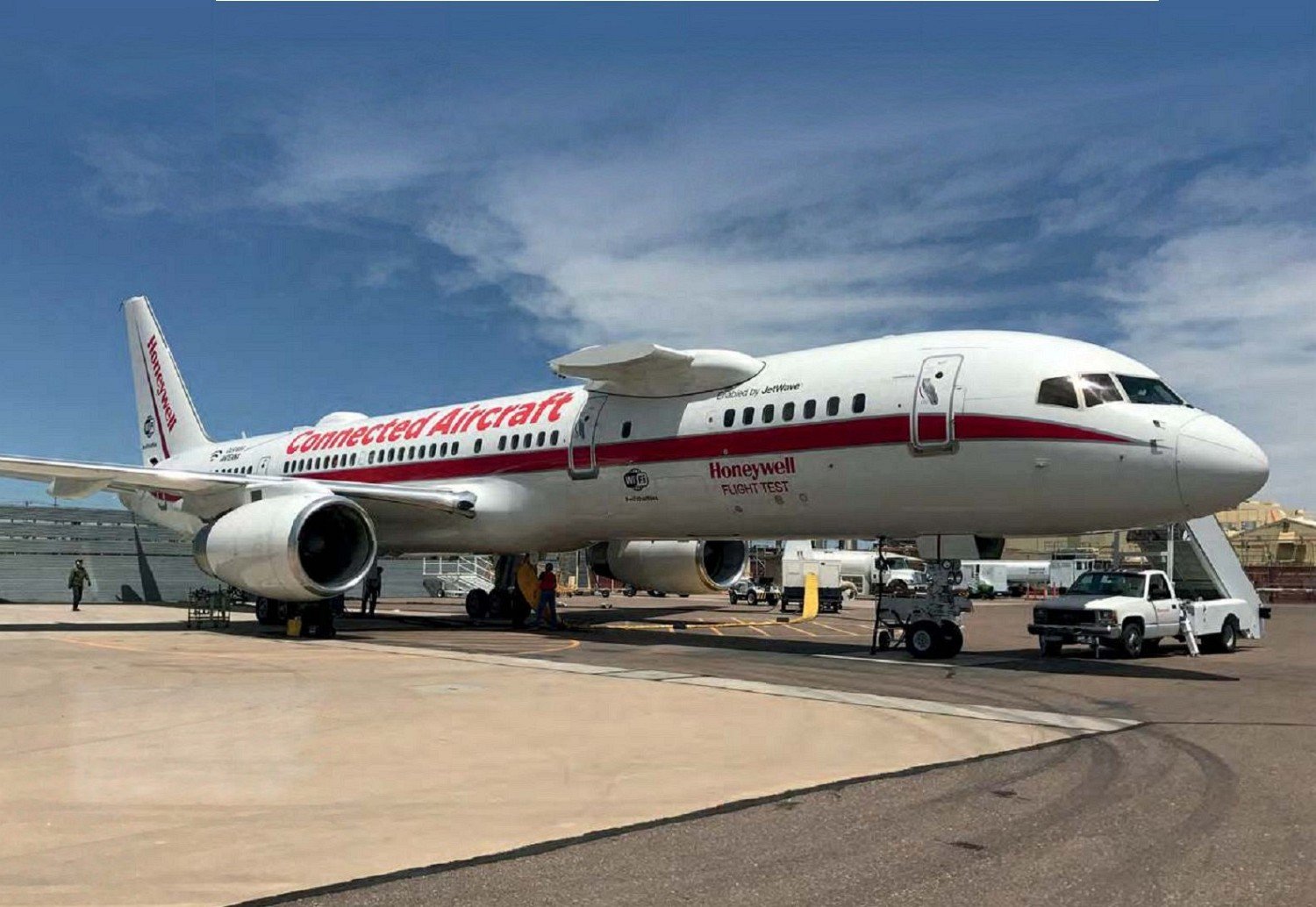 One of the most distinctive features of the 35-year-old former Eastern Air Lines and MyTravel Boeing 757 N757HW (c/n 22194), used as a testbed by Honeywell, is the pylon used for airborne engine tests.
Honeywell

It was delivered to Eastern Air Lines as N504EA on February 28, 1983, where it served the airline until the carrier closed in 1991. The aircraft found a new home in 1995 when the UK charter company Airtours International Airways acquired it from storage. The 757 continued to fly for Airtours and, subsequently, MyTravel, after Airtours was restructured and brought under the management of MyTravel Group in 2002.

Honeywell acquired the aircraft in 2005 to replace its Boeing 720, with the 757 aptly reregistered as N757HW and stripped and modified to become the company’s new testbed. Unique to the Honeywell 757 is the third pylon on the right-hand side aft of the flight deck, used for airborne engine tests.

Except the first three seat rows, the modified 757-200 has no interior fittings. Cables run along the airframe and in place of seats are numerous servers and six flight-test stations towards the rear of the fuselage.

Honeywell’s chief test pilot, Joseph Duval, said: “The 757 is an aircraft with great performance, robust airframe and a big envelope for the centre of gravity.”

The first two flight test stations have an overall view of all the systems being tested and are responsible for running the third, pylon-mounted engine when the engine test is taking place.

Charlie Gibson, Honeywell Flight Test Engineer, said: The flight engineers on these stations are usually the ones coordinating with the pilots and radar engineers.”

In the middle is a second pair of consoles with similar functions, but in the demonstration flight on which AIR International flew, the author witnessed that it was showing video feed from the cockpit where the pilot’s actions and flight parameters are recorded and used for human factors studies.

Gibson said: “Using the video experts, around the globe we can witness how pilots interact with the avionics, without being physically on the flight themselves.”

The last two consoles collect data for an IntuVue RDR-4000 weather radar installed on the aircraft. Gibson said hundreds of gigabytes of data and readings are collected from a single flight, and that the data will be used to further refine and calibrate the radar’s performance and improve the company’s GoDirect Weather application.

Honeywell named the 757 the ‘Connected Aircraft’ after rigging it with a series of wireless and connectivity technologies in the Honeywell portfolio. This includes the GoDirect family of products, Connected Radar and GX Aviation in-flight Wi-Fi powered by Honeywell’s JetWave hardware.

Honeywell GoDirect is an app-based system that uses digital technologies to maximise and manage the efficiency of aircrew and groundcrew and their aircraft.

For example, GoDirect Maintenance links up with and analyses data from aircraft systems like the auxiliary power unit (APU), brakes and environmental control system to identify potential faults for predictive maintenance. This technology reduced APU-related delays by 35% in a trial with Cathay Pacific Airways, one of several airlines to have put GoDirect Maintenance into service.

Other apps include GoDirect Flight Preview, which gives pilots a highly accurate graphical representation of surrounding terrain and waypoints on the route ahead with vertical and lateral profiling. 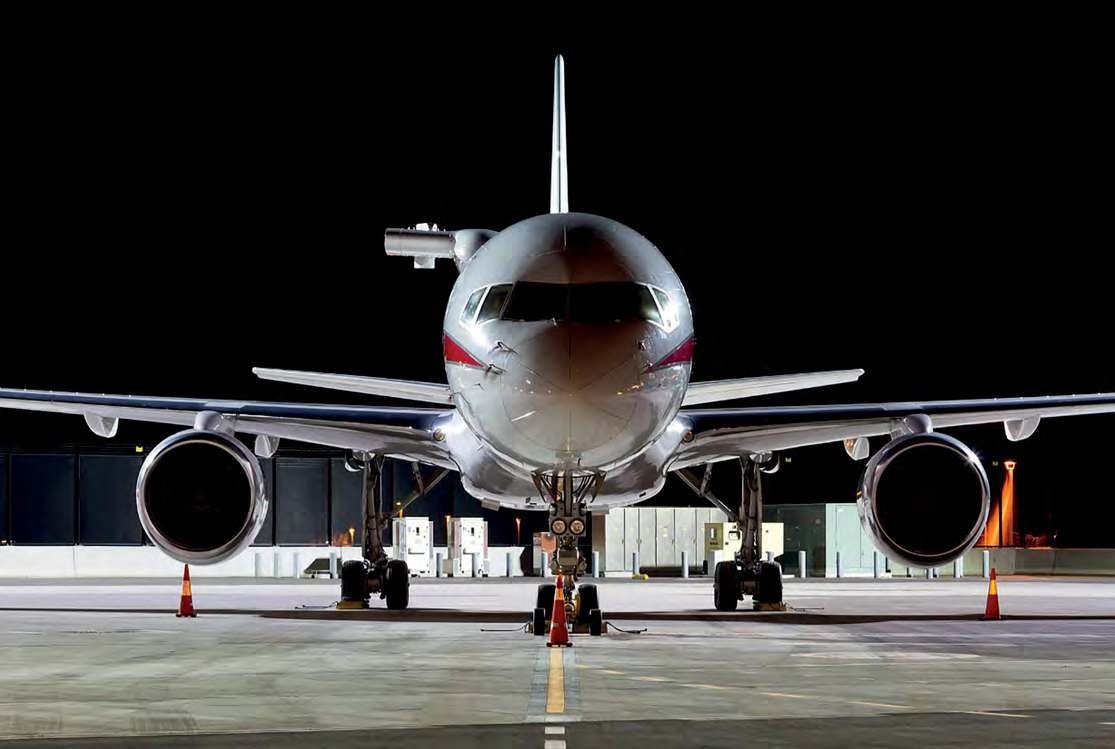 Honeywell’s 757 features numerous wireless and connectivity technologies in the Honeywell portfolio, including the GoDirect family.
Honeywell

Another app called Fuel Efficiency tracks fuel consumption during a light, while the aforementioned GoDirect Weather shows up-to-date en route weather data. Honeywell previously told AIR International this app enables crews to see a live picture of the weather ahead hundreds of miles down path, typically beyond what an onboard radar will show them.

A relatively new capability is the Connected Radar, which aggregates and effectively crowdsources weather radar data from numerous airborne aircraft. This data is sent not only to ground stations, but also to other aircraft in the air that have the GoDirect Weather application-based software, allowing other pilots along the light path to receive accurate real-time weather data.

Duval said: “The aircraft is the last thing to be connected, and the bandwidth we are providing is opening up so many more possibilities. The people on the ground and airports already have such connectivity, and it is now connecting it to the aircraft, which is the last piece of the puzzle.”

The Boeing 757 received US Federal Aviation Administration approval for JetWave in 2016 and the hardware has subsequently also been approved for many other commercial aircraft, including the Boeing 737, Airbus A320 and A350 and Bombardier, Dassault and Gulfstream business jet families.

Another feature on the 757 is Honeywell’s Aspire 300 satellite communications system, which includes a low-profile Iridium antenna providing continuous coverage from 1610MHz to 1626.5MHz (and qualified for both high-speed military and commercial aircraft), a satellite data unit and a satcom configuration model.

The Aspire 300 system meets requirements for satcom safety services voice operation, can be used in lieu of HF radio and has full FANS-over-Iridium functionality. Honeywell Aerospace says the system provides “significant savings in terms of weight, power and volume, while dramatically enhancing the aircraft’s overall safety of operation”.

Honeywell deployed the 757 to Asia-Pacific for three weeks during June and July 2018, specifically to collect weather data during the onset of the southwest monsoon season.

The aircraft was initially based in Thailand, from where it could access both the Bay of Bengal in the west and the South China Sea in the east. It then went to Australia, before arriving in Singapore in the last week of June.

The 757 can also capture video recordings of the weather and a probe on the engine mount can measure weather features like droplet size and moisture content. This is to allow Honeywell to match the radar data with visual information and other findings.

Duval said: “The particularly interesting [aspect] about this region is that it is in the Inter Tropical Conversion Zone; land masses here affect that differently from other parts of the equator, so we are looking for weather that might be challenging for the radar to interpret. In North America, the storm systems can go as high as 50,000–60,000ft; in Asia, you might get only storm clouds in the mid-30,000ft, but the moisture is all in the bottom, yet [there is] enough energy to create turbulence above that.”

Duval explained the pilots run through the mission together with Honeywell’s in-house radar engineers and meteorologists to help them find what they are looking for. He said: “They can dictate the type of profile or altitude being flown by predicting the weather forecasts”, adding that each storm-chasing mission lasts about four hours.

He said: “To have a weather radar that can correctly interpret these features, we need to constantly seek these weather features around the world.” 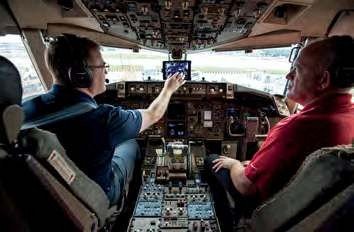 Pilots can retrieve information like real-time weather data, airport layout via the tablet with the various GoDirect applications.
Chen Chuanren