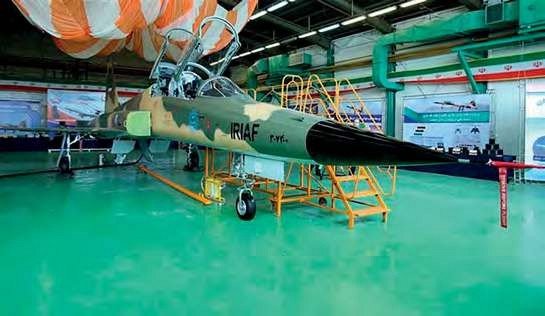 Iran announced yet another ‘indigenous’ warplane in late October when it revealed the HESA Kowsar (Thunderbolt). As can be seen in this image, it bears an uncanny resemblance to the veteran Northrop F-5 Freedom Fighter purchased by the Shah of Iran before the Islamic Revolution in the late 1970s.
Iranian state TV

Iran has started production of a locally-designed fighter aircraft, to be known as ‘Kowsar’ (Thunderbolt). Defence Minister Amir Hatami said at an unveiling ceremony, which was shown on state television on October 29: “Soon the needed number of this plane will be produced and put at the service of the Air Force.”

Despite the claims that the Kowsar, which was first announced to the world in August 2018, is “100% findigenously made”, images reveal it to be essentially a 1970s-vintage two-seat F-5 Freedom Fighter.