The Mi-26T2V is essentially a legacy Mi-26 given a facelift to meet modern RuASF specifications, including a hybrid analogue/digital cockpit, digital autopilot and an enhanced navigation suite. Deliveries to the RuASF are expected to begin in 2020.
Alexander Mladenov

THE RUSSIAN Air and Space Force (RuASF) reported delivery of three Yak-130 jet trainers, handed over from Irkut Corporation to the Ministry of Defence in early October.

These were, in fact, the last aircraft from the 2016 contract covering 30 of the type. The first batch of ten examples from this contract was handed over in November and December 2016 to the 200th Training Air Base at Armavir in the south-western part of Russia, part of the Krasnodar Military Higher Aviation Pilot School named after Hero of the Soviet Union A K Serov. These aircraft are being used for the basic and advanced training of future pilots for the RuASF’s and Russian Naval Aviation’s fighter branch, with the first student training operations launched at Armavir in April 2016.

The second batch of six Yak- 130s followed suit in May and June 2017, also delivered to the 200th Training Air Base. Deliveries were then halted because of the need to introduce urgent design improvements after one aircraft was lost in an accident and two more incidents in 2017 that resulted in aircraft damage when the nose undercarriage leg could not be lowered for landing.

Deliveries resumed in March 2018, with 11 aircraft delivered to Armavir between then and August and then the final three from the 2016 contract this October.

Thirty-four Irkut-built Yak- 130s are currently operated by the 209th Training Air Base at Borisoglebsk, which is responsible for the advanced training of student pilots for attack and frontal bomber branches, and the rest equip the 200th Training Air Base.

According to information released in mid-October by Russian Helicopters, quoted by the RIA Novosti news agency, the preliminary flight test phase of the upgraded Mi-26T2V for Russian Army Aviation is set to be completed this year. Completion of this phase, which is carried out by the manufacturer and explores flight performance and the functionality of the new mission suite, allows the helicopter to move on to the exhaustive state flight testing undertaken by the RuASF.

The Mi-26T2V is a heavy lift helicopter unveiled to the public for the first time at the Army-2018 defence exhibition held at Kubinka near Moscow. The prototype, reworked from a standard Mi-26 military transport helicopter, made its maiden light at the factory airfield of Rostvertol plant in Rostov on Don on August 19, 2018. According to Alexey Travkin, Mi-26T2V Programme Director at Rostvertol, production of the new version, tailored for the Russian military, will begin in 2019. 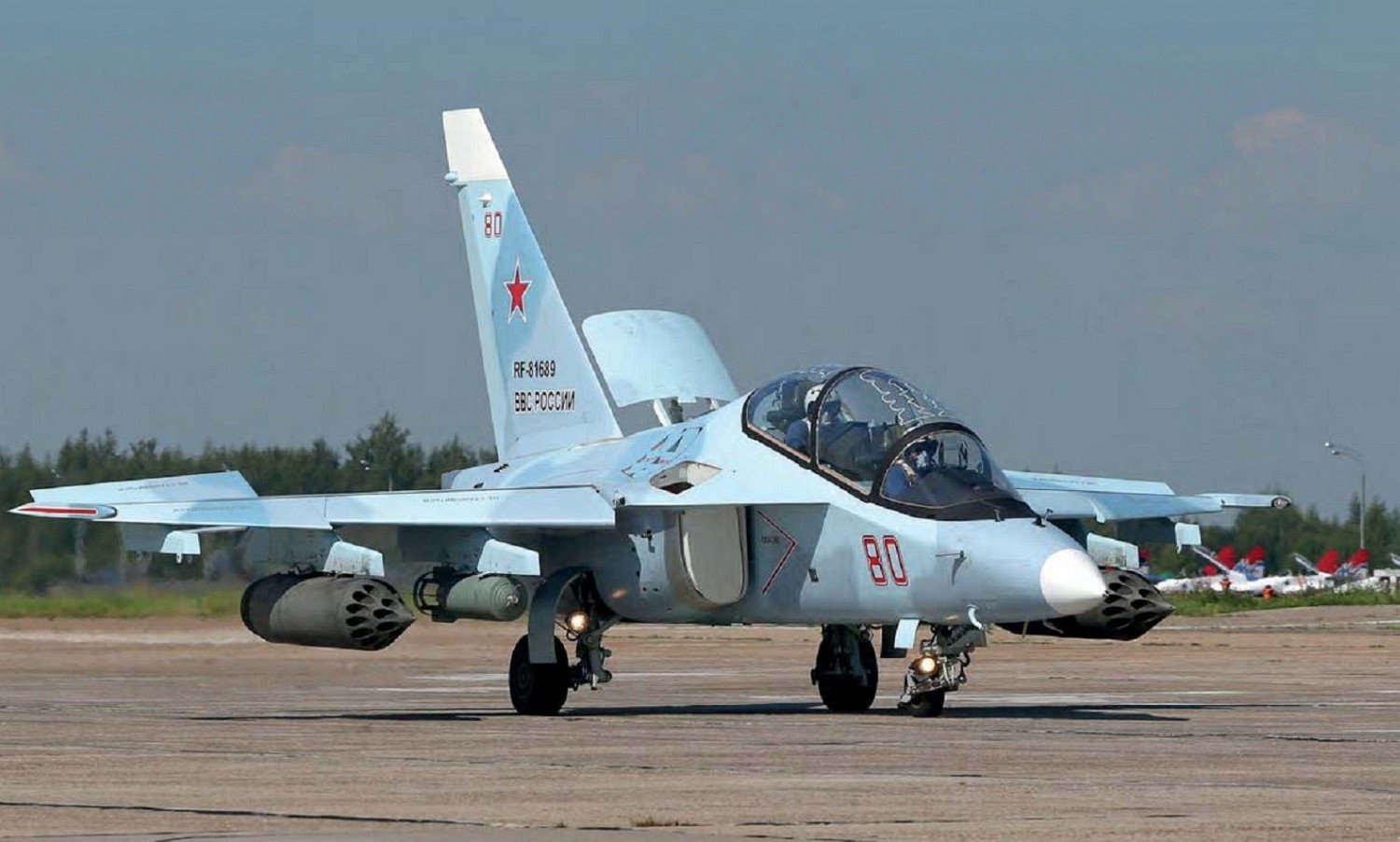 The twin-engine Yak-130 has superseded both the Su-25 and L-39C for advanced and lead-in fighter training phases at the 209th UAB in Borisoglebsk. It later replaced the MiG-29s and L-39CSs operated by the 200th UAB at Armavir.
Alexander Mladenov 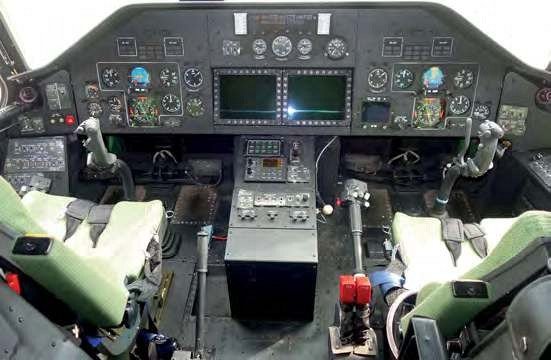 The Mi-26T2V’s cockpit shows its provision for NVGs and workstations for four crew members.
Alexander Mladenov

The Mi-26T2V derivative, developed with Russian Helicopters’ own money, is based on the export-standard Mi-26T2, but sports a set of mission-specific systems required by the Russian military. It has workstations in the cockpit for four crew members – pilot-commander, co-pilot, navigator and light engineer on crash-resistant seats; one or two loadmasters are accommodated in the cargo hold. The all-new NPK90-2V digital light/navigation suite, combined with the newly installed mission systems, enables operations in very cold weather and low visibility conditions, day and night.

The Mi-26T2V retains the capability to transport payloads weighing of up to 20 tonnes (44,000lb) on external slings or inside the cabin. Its maximum gross weight is 56 tonnes (123,457lb), the same as that of its predecessor, with the spacious cargo hold accommodating up to 68 fully-equipped paratroops or 82 troops on lightweight folding seats, arranged in four rows. When equipped for medevac, the cabin can house up to 60 casualties.

Russian military requirements call for the Mi-26T2V to be capable of operating from unprepared landing sites and in all weathers, including in extremely cold Arctic conditions, supporting the Russian military bases established in deep-frozen regions well above the Arctic circle.

More Ka-27Ms for the Baltic Fleet

The Russian Navy reported a long-sought boost of the antisubmarine capabilities of its Baltic Fleet thanks to the recent introduction of a five-strong batch of Kamov Ka-27M (NATO reporting name Helix) helicopters.

According to a statement by Colonel Igor Muginov, head of the press service of the Russian Western Military District, the upgraded co-axial rotor, shipborne helicopters feature enhanced anti-submarine capabilities and are based in the Kaliningrad exclave bordering Poland and Lithuania.

The rotary-wing aviation assets of the Baltic Fleet there are housed at Donskoe airfield near the city of Kaliningrad. A proportion of the aircrews of the unit have already completed a conversion course to operate the Ka-27M at the naval combat and aircrew training centre at Yeisk.

According to the Moscowbased Centre of Analysis of Strategies and Technologies think-tank, currently the Baltic Fleet’s aviation service has seven Ka-27Ms, including five examples delivered this October, while Russian Naval Aviation has a total of 22 helicopters of this enhanced-capability version with extended service life making it capable of service until the late 2020s or even early 2030s.

The new all-digital mission suite integrated on the Ka-27M during the upgrade was designed and tested by Moscow’s Kamov and its installation is undertaken at the KumAPE plan in Kumertau together with an overhaul to extend the service life.

The new mission and light/ navigation systems integrated on the Ka-27M have turned the once anti-submarine warfare capable only Ka-27PL helicopter into a true multi-mission naval rotary-wing platform endowed with an effective anti-surface warfare capability; it is now also able to perform a raft of new naval combat roles as diverse as over the- horizon targeting, airborne early warning and anti-piracy.

The first batch of eight Ka- 27Ms, upgraded from existing Ka-27PLs, was handed over to the Russian MoD after upgrade and life extension at the KumAPE plant in December 2016, with 14 more following suit in 2017 and 2018.

Russian Navy plans call for 46 Ka- 27PLs to be upgraded to the new Ka-27M standard. In September 2018, Russian Helicopters (the parent company of Kamov and KumAPE) announced it expects the signature of a new contract for upgrading two more Ka-27PLs to Ka-27M standard. 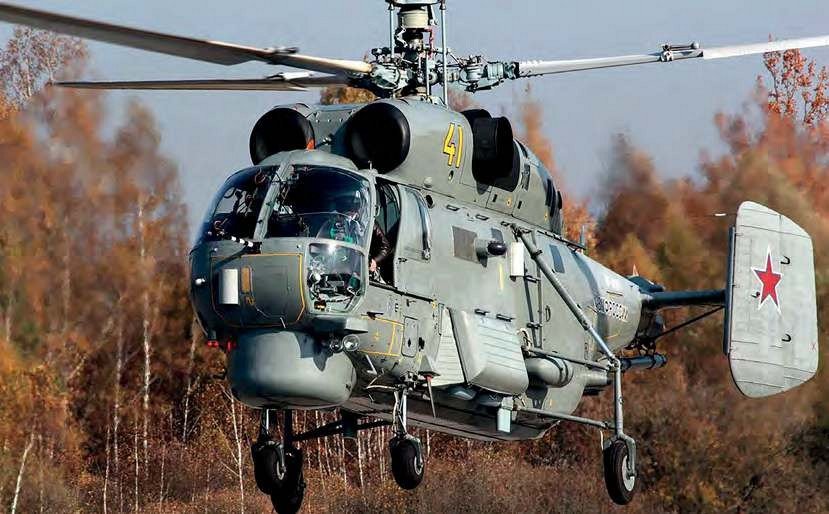 This is one of the five newly-upgraded Ka-27M ship borne naval helicopters handed over to the Baltic Fleet aviation in October 2018.
Russian Ministry of Defence