Held on the Malaysian resort island of Langkawi in the Andaman Sea, the 2019 Langkawi International Maritime and Aerospace exhibition (LIMA 19) was held between March 26 and 30, 2019. Nigel Pittaway reports 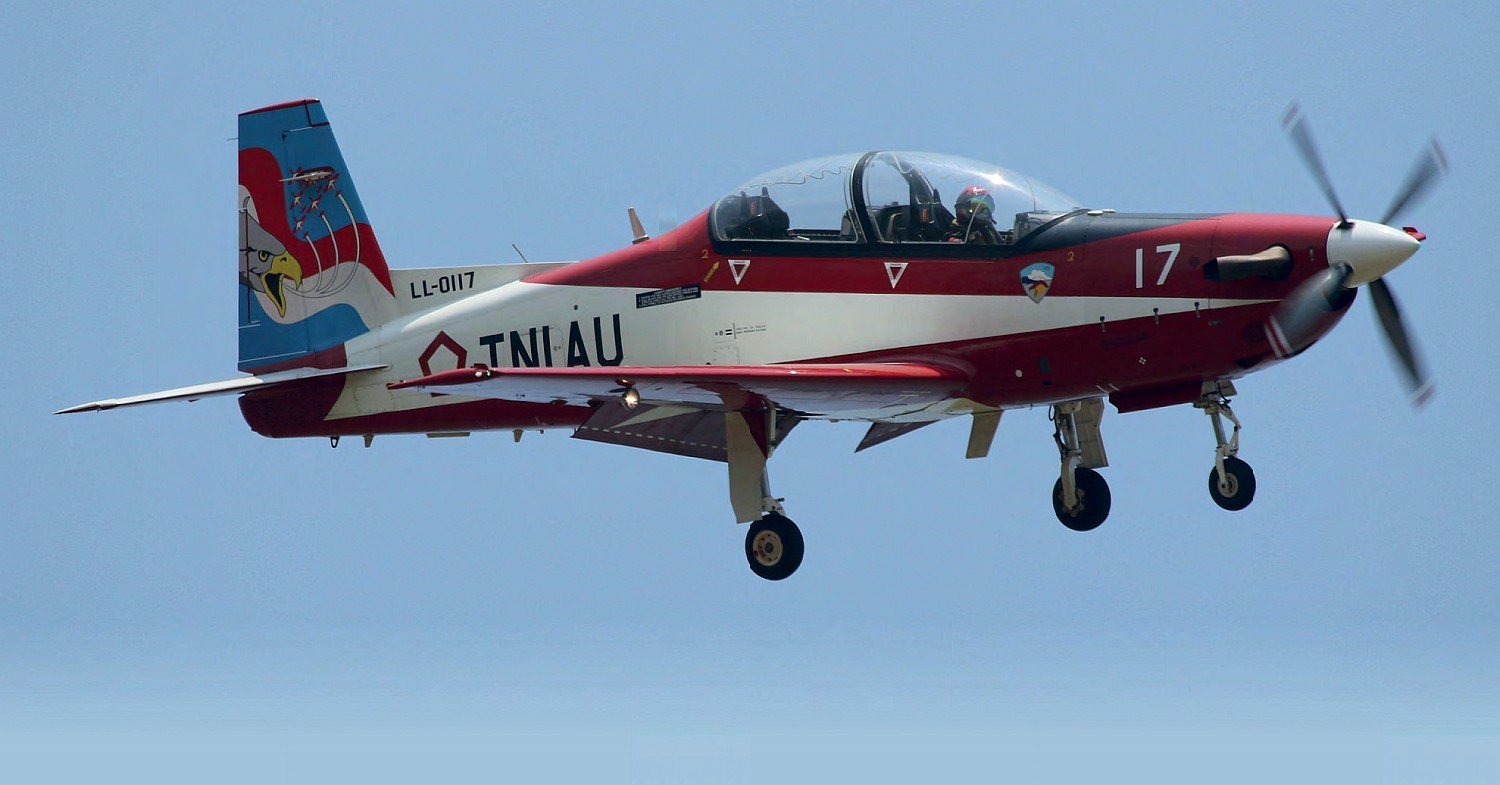 AS WITH previous shows however, there was very little available budget for Malaysian defence spending in 2019 and no large deals were announced, nor contracts signed. However, the Tentera Udara Diraja Malaysia (TUDM or Royal Malaysian Air Force) has a vision for the future under its Capability 2055 plan and this, coupled with the muchanticipated Defence White Paper to be released by the coalition government of recently elected Prime Minister Dr Mahathir Mohamad in September, provided a glimmer of hope around the exhibition halls.

A request for information (RFI) has been released to manufacturers around the world and two of the likely contenders, India’s Hindustan Aeronautics Limited (HAL) and Russia’s Irkut Corporation (represented by state arms supplier Rosoboronexport) had aircraft at LIMA 19.

Malaysia’s geo-political priorities are ever-present too and the need for an enhanced maritime surveillance capability which spans everything from littoral intelligence, surveillance and reconnaissance assets, to high end, blue water maritime patrol aircraft remains.

A further RFI has recently been released to manufacturers of both manned and unmanned platforms to this end.

LIMA, as its name implies, is a combined maritime and aerospace exhibition and the 2019 show attracted 406 companies from 32 countries across the two domains, according to show organisers. Perhaps reflecting the stagnation of Malaysian defence procurement programmes over the years, this number was down from a high of 555 companies, from 36 countries, two years ago and is the lowest since at least 2013. Show organisers made much of the fact that 49% of the companies involved were local companies, but overall the proportion of defence companies represented in the halls fell to 60% of total participation, down from 70% in 2017.

According to the organiser’s figures, 103 aircraft participated in LIMA 19 and this included a number of ‘firsts’.

Making their debut at a LIMA event were two HAL Tejas Mk1 LCAs (LA-5009 and LA-5010) from the Indian Air Force’s 45 ‘Flying Daggers’ Squadron, which had arrived at the show via a stopover in Myanmar, en-route from the IAF’s Kalaikunda Air Force Station.

The two aircraft were supported by an IAF Ilyushin Il-76 and Lockheed C-130J-30 Hercules, which did not stay for the show. One Tejas took part in the daily flying display in support of a HAL/Indian government bid for the Malaysian LCA competition.

Similarly, the Irkut Corporation provided a Yakovlev Yak-130 (130/01) for the first time, which arrived at the show aboard a Russian civil-registered Il-76TD. The Yak-130 took part in the daily flying display, but also provided at least two evaluation flights for TUDM pilots during its stay on Langkawi.

Another type making its LIMA (and even international) debut, albeit briefly, was the Republic of Singapore Air Force’s first A330 multi-role tanker transport (MRTT).

The aircraft made a flypast on the opening day, before landing to drop off the island nation’s Defence Minister, Dr Ng Eng Hen. The MRTT performed a similar flypast during the second day and then landed to collect Dr Ng and his entourage.

Making a LIMA debut in the static park were a pair of US Navy EA-18G Growlers from Electronic Attack Squadron 132 (VAQ-132) ‘Scorpions’ and a MQ-9A Reaper from California Air National Guard’s 196th ATKS ‘Grizzlies’.

Aerobatic teams included the Russian Knights with their Sukhoi Su-30SM fighters and Indonesia’s Team Jupiter, with the KAI KT-1B Wong Bee. Both teams displayed a modified colour scheme on their aircraft since their previous appearances at LIMA 17.

The Malaysian Government released an RFI to the manufacturers of Light Combat Aircraft in January, with a requirement for an initial 12 aircraft, to be followed by a second tranche of 24 at some further point in the future.

According to TUDM chief, General Affendi Buang, at LIMA, Malaysia is looking to spend between MKR 6 and 7 billion on the acquisition of the 36 new aircraft. Affendi said that the first aircraft would enter service after a selection has been made, but he put no timeline on any such decision.

HAL will offer the Mk1A version of its indigenous Tejas LCA, complete with Elta EL/M-2052 AESA radar, against the Malaysian requirement. The company has recently delivered the 16th Tejas Mk1 (in initial operational configuration) to the Indian Air Force and is developing the improved Mk1A, which will also be the initial export version.

Immediately prior to LIMA 19, Dr Mahathir had visited Pakistan and signed an agreement with the Pakistani government for the establishment of a joint venture between the two countries to build Malaysian Proton cars locally. During the visit Dr Mahathir witnessed a demonstration of the PAC JF-17 and reportedly told Malaysian reporters he was impressed with its performance and could see no reason why it could not meet the TUDM LCA requirements.

Rosoboron export was naturally keen to extoll the virtues of the Yak- 130 at LIMA. Head of Directorate Sergey Gorbenko said that over 160 aircraft are now in service and the aircraft has been exported to five countries outside Russia, including Bangladesh, Laos, Myanmar in the region. Gorbenko also confirmed that Rosoboron export had responded to the Malaysian RFI, saying: “We are planning to bid for the LCA programme. The initial stage is 18 aircraft, and the whole programme includes 36 jets.”

Although not in the LCA category, a Saab representative confirmed at LIMA that the Swedish manufacturer had been invited to respond to the RFI and did so with an offer of an initial 12 JAS 39 Gripens, with the mix of single-seat and two-seat aircraft to be determined by the customer.

The representative said that the Gripens will all be new-build aircraft and can be delivered within two years of an order. Saab had previously proposed a lease arrangement for a similar number of Gripens during the MRCA competition, which it said could have been acquired from within the MiG-29N operational budget, but the offer was not taken up.

The new proposal is understood to involve the sale of aircraft, rather than the previous lease offer and Saab points out that a common type for both LCA and MRCA could, in effect, bring the stalled fighter programme within reach.

Although they did not have aircraft at LIMAN19, both KAI and Leonardo have confirmed their responses to the LCA RFI. 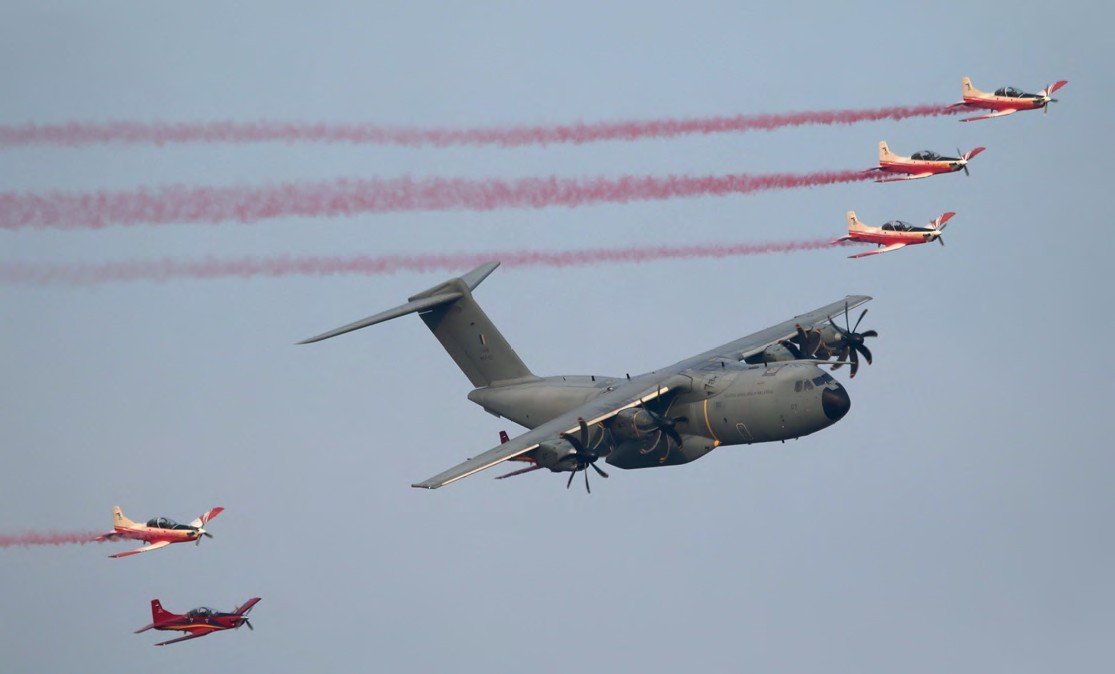 As part of the Tentera Udara Diraja Malaysia’s trademark airfield attack sequence to open the show, one of its four A400Ms, serial number M54-03 operated by 22 Skuadron, flies in formation with Pilatus PC-7 MkII trainers. 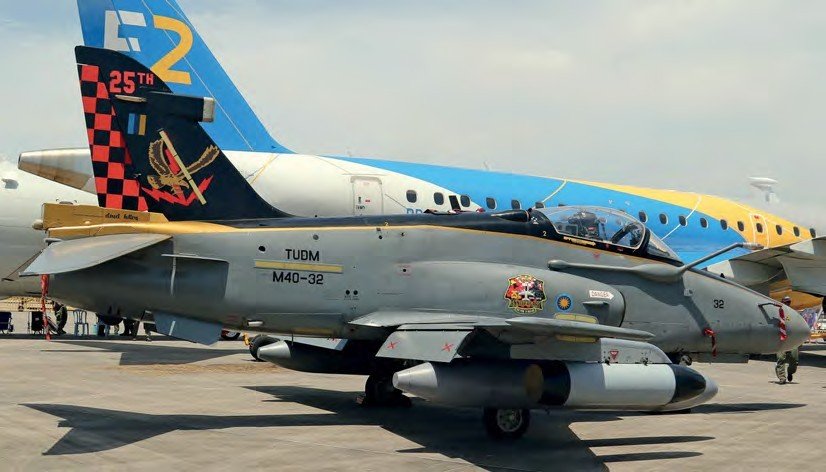 Tentera Udara Diraja Malaysia Hawk Mk208, serial number M40-32 assigned to 15 Skuadron at Butterworth, is one of two painted with a commemorative colour scheme to mark the type’s 25th anniversary in service.

The LCA would logically be expected to replace the BAE Systems Hawk, which celebrated 25 years in service with the TUDM during LIMA 19, but mixed messages from General Affendi Buang suggest the Hawk may remain in service for at least another decade.

Malaysia acquired 10 twin-seat Hawk Mk108s and 18 single-seat Mk208 aircraft and the first entered service in April 1994. The TUDM has painted two aircraft in special markings to commemorate the event, with one (Hawk Mk208 M40- 32) taking pride of place in the static display and the other (Hawk Mk108 M40-01) flying in the airfield attack sequence that is the trademark opening display of the show.

At a ceremony at TUDM Butterworth prior to LIMA 19, Affendi told Malaysian media that the Hawk remained capable, saying: “The Hawk is still capable of delivering and remaining relevant. We are planning to use it for ten more years and there will be upgrades.”

In July 2018, Malaysian Defence Minister Mohamad Sabu advised the country’s parliament that 14 of the TUDM’s 18 Sukhoi Su-30MKM fighters were unserviceable and awaiting major overhaul, due every ten years in line with many Russian aircraft types.

The TUDM did not have funding to return the aircraft to the original equipment manufacturer, Russia’s United Aircraft Corporation at Irkut, so the Malaysian Defence Ministry engaged with local contractor Aerospace System Technology Corporation (ATSC, a joint venture between Malaysia and Russia) to use one aircraft as a ‘proof of concept’ vehicle to validate a local overhaul programme.

The first aircraft to undergo this work was M52-11, which was completed shortly before LIMA 19 and ceremonially handed back to the TUDM in the presence of Prime Minister Dr Mahathir Mohamad on the opening day of the show.

The ten-year reset is known as the Programme of Preventative and Restoration Work (PRW) and the first aircraft reportedly took 22 months to complete. Two more aircraft have recently been completed and the remainder will now be cycled through the ATSC programme, a process which is expected to take a number of years to complete.

Speaking at the official handover of M52-11 ATSC CEO Lt Col (Ret) Fadzar bin Suhada said: “The handover of this aircraft marks the advancement of national aircraft engineering capability, which is critical for the Su-30MKM aircraft. ATSC has proved that the 10-years calendar service inspection was able to be conducted in-country by employing 100% local expertise.”

The aircraft are operated by 11 Skuadron, TUDM, the ‘Golden Cobras’ and no fewer than ten individual aircraft were at the show, but it is not known how many of those are actually fully operational.

While the breadth of Malaysia’s maritime surveillance requirements is not abundantly clear, the government released an RFI to manufacturers of a range of aircraft – both manned and unmanned – in February, and an eventual request for proposals and subsequent request for tenders are eagerly awaited by industry. 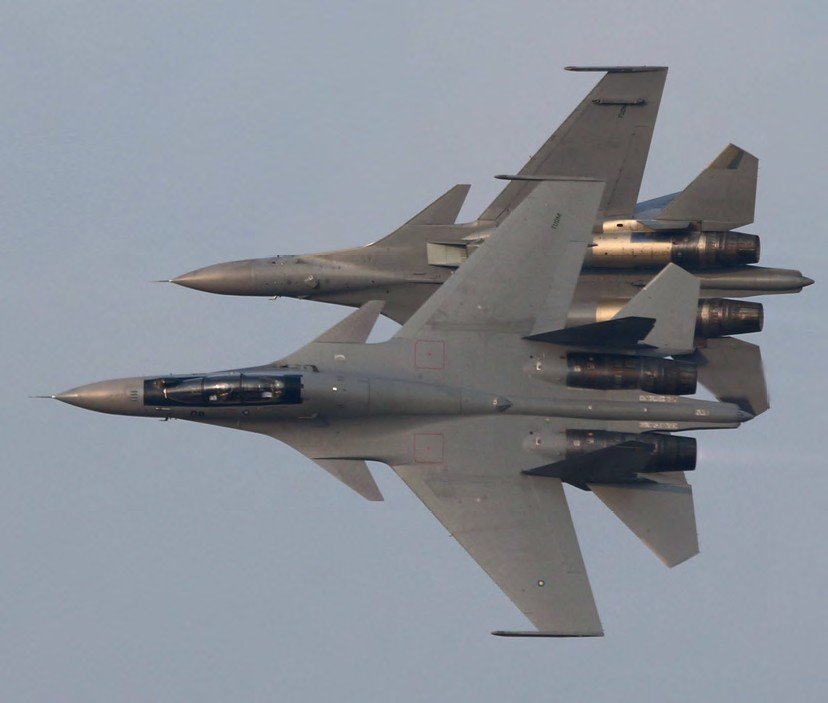 No fewer than ten of the Tentera Udara Diraja Malaysia’s 18 Sukhoi Su-30MKM fighters participated in LIMA 19, including three in the impressive airfield attack sequence staged to open the show. 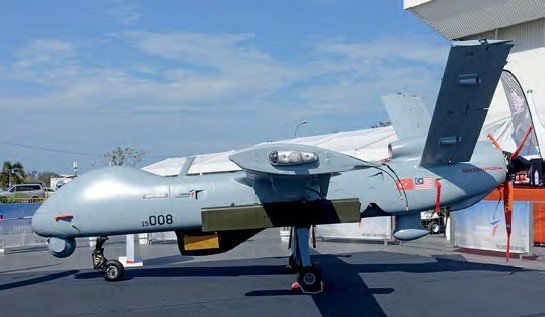 TAI’s Anka unmanned air vehicle is a contender for Malaysia’s maritime surveillance requirement. Anka 15-008 was on display at LIMA 19.

At the previous LIMA 17 show, industry was talking about a two-tiered approach to the country’s maritime surveillance requirements. The first was for a smaller platform for in-shore tasks and the second for an open water capability, but it is now unclear whether these two distinct requirements have merged, or if they remain separate programmes.

Malaysia has a relatively large economic exclusion zone (EEZ) and is situated alongside one of the busiest shipping routes in the world, the Malacca Strait, through which an estimated 25% of the world’s oil is transported. The country therefore has a pressing requirement for control of its EEZ, including counter smuggling, counter-piracy and counterterrorism capabilities.

From an unmanned aerial systems perspective, the Malaysian Ministry of Defence has a requirement for a medium altitude long endurance UAS, which is also capable of employing a range of air-to-ground weapons.

Examples of both the Anka and Wing Loong II air vehicles were on display outside the main entrance to the Mahsuri International Exhibition Centre hall at LIMA 19, complete with a likely array of weapons.

Given its budget constraints, Malaysia is unlikely to afford a gold-plated manned maritime surveillance platform such as the Boeing P-8A Poseidon, but several manufacturers confirmed their response to the RFI at LIMA 19.

Airbus Defence an Space Head of South East Asia, Johan Pelissier, told AIR International that his company has offered a solution based upon the C295MPA platform, but the number of aircraft required was yet to be defined. Pelissier said: “We have a long-standing arrangement with the Malaysian Maritime Enforcement Agency for coastal surveillance, using groundbased sensors, and we have responded to the RFI. We see the C295 as an ideal fit.”

Other companies understood to have responded include Dassault Falcon 2000MSA, Leonardo P-72A and Viking Guardian 400.