New Orleans may have shuttered the terminal that connected it to the world for six decades, but the old Louis Armstrong International is still standing. Chris Sloan pays it a final nostalgic visit

Louisiana’s largest city inaugurated its new, gleaming, ultra-modern US$1.3bn airport terminal in November 2019. In its first 18 months in operation, the new MSY –a César Pelli-designed glass and steel-clad building – has won praise from passengers and critics, with USA Today naming it “one of America’s three top airports” in 2020.

On the southside of the airfield, however, lies the all but forgotten 1959- built terminal, once a jumping place full of tourists toasting their Mardi Gras or JazzFest vacations with one last rum cocktail, but today still and empty. Its final day of operations, November 5, 2019, saw nearly 15,000 people pass through the doors. As the last flight neared, the good times rolled one final time, New Orleans style, with a traditional jazz funeral parading through the terminal. Gate agents and passengers struck up a rousing rendition of ‘When The Saints Go Marching In’ as they boarded, with the final pushback triggering a few tears for those watching on the ramp.

With the hard cut-over to the new terminal just hours away, the old facility was unsentimentally stripped. Work crews loaded the last of the airline signage, computer terminals, concession supplies and TSA security equipment into an armada of moving vans bound for their new home two miles away. By midnight, the curtain had come down on the South Terminal. 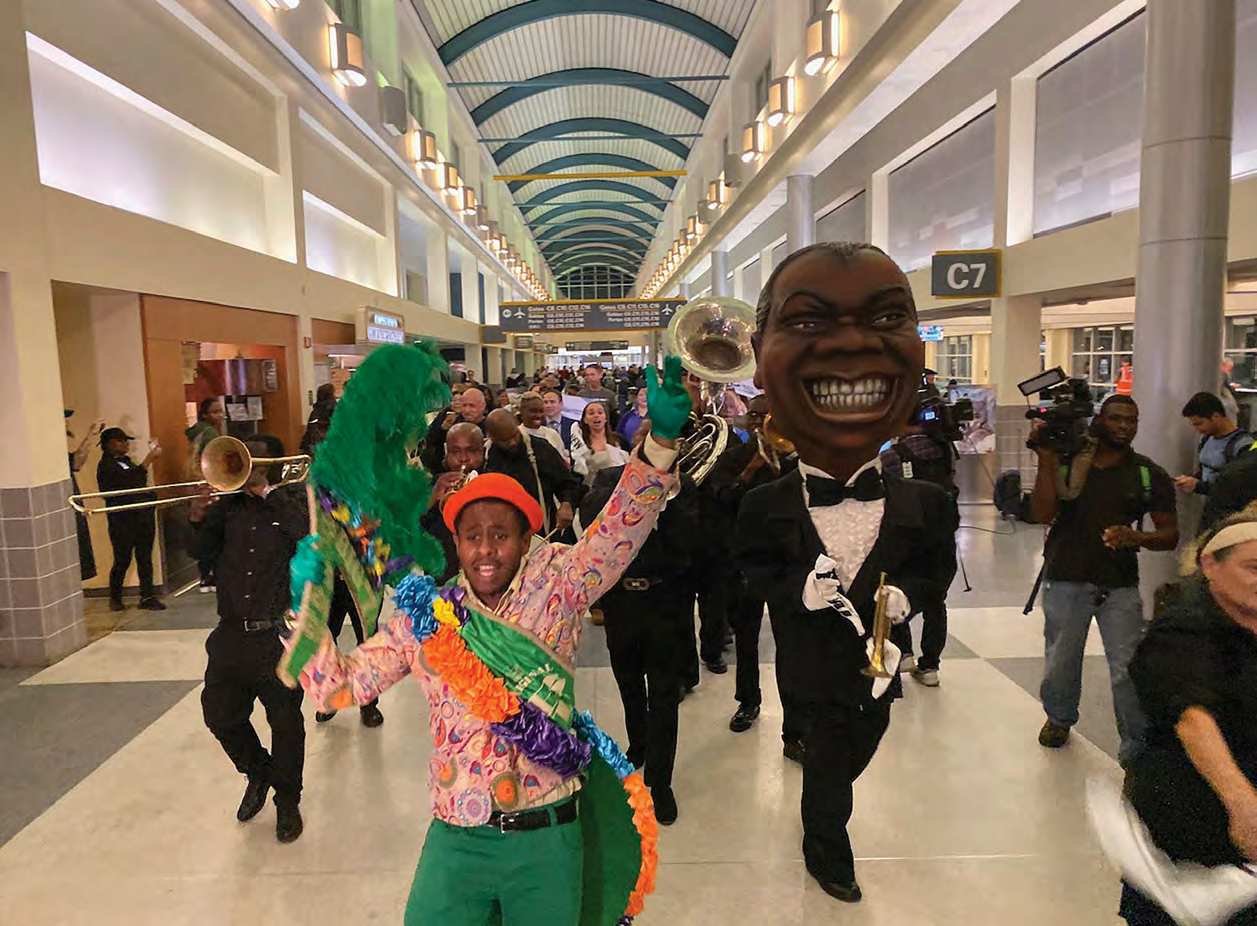 In true New Orleans style, a lively jazz funeral was held as the final flight from the 1959-built facility prepared to depart
All images Chris Sloan unless stated otherwise 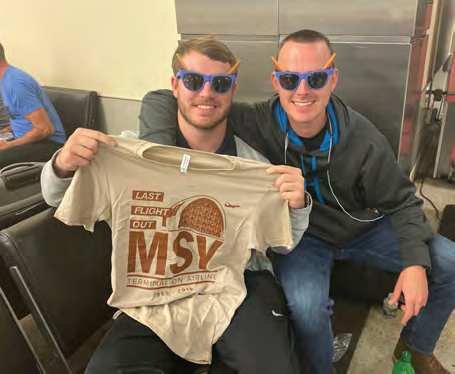 Kevin Dolliole, a native of the city and its director of aviation, is nostalgic when describing the step back in time from the new 21st century airport showplace to the old facility, where the airport’s administration offices remain. He said: “My very first flight was out of this facility when I was seven years old. And having worked here over the years, having all of the memories of the hustle and bustle in this facility, it was really strange and almost sad to see it in a state like this.”

A year and a half after it closed, I paid a visit to my forlorn old friend, which I had seen on its last day as a functioning terminal. Not one passenger had set foot in the place, nor a jet parked at one of its gates, since the last flight out... before the world changed.

I had expected to find a deserted shell with old tickets, unsold magazines and beignet pastry crumbs strewn around. Instead, New Orleans has preserved its concourse corpse with dignity. The city that reveres its past has cleaned and temporarily preserved its gateway, even though most of it won’t live past the stay of execution. I found the lights and air conditioning on and it was cleaner than I’d ever seen it.

It wasn’t quite dead, but wasn’t alive either. The FIS flight screens were dark and powered down. Check-in desks were devoid of most signage, stanchions, computers, kiosks – and people. The former rumbling baggage claim conveyor belts were stopped in their tracks, the escalators frozen in position. Where once security checkpoint screening equipment, personnel and interminable passenger lines stood, was a void with marks on the floor outlining where they used to be. The jetways, though intact, were empty portals to nothingness.

The iconic nine-foot-high statue of Louis Armstrong that presided over the vintage parabola structure, welcoming the masses of humanity, was still there. There are no plans to move the sad ‘Satchmo’ over to the new terminal, which is not only a shame, but out of character for a city that likes to cling on to its past.

The only other person I saw enter during our visit was an airport security officer. Curiously, there were canned airline public address announcements still occasionally echoing through the air: “Kerb side is used for loading and unloading only.” 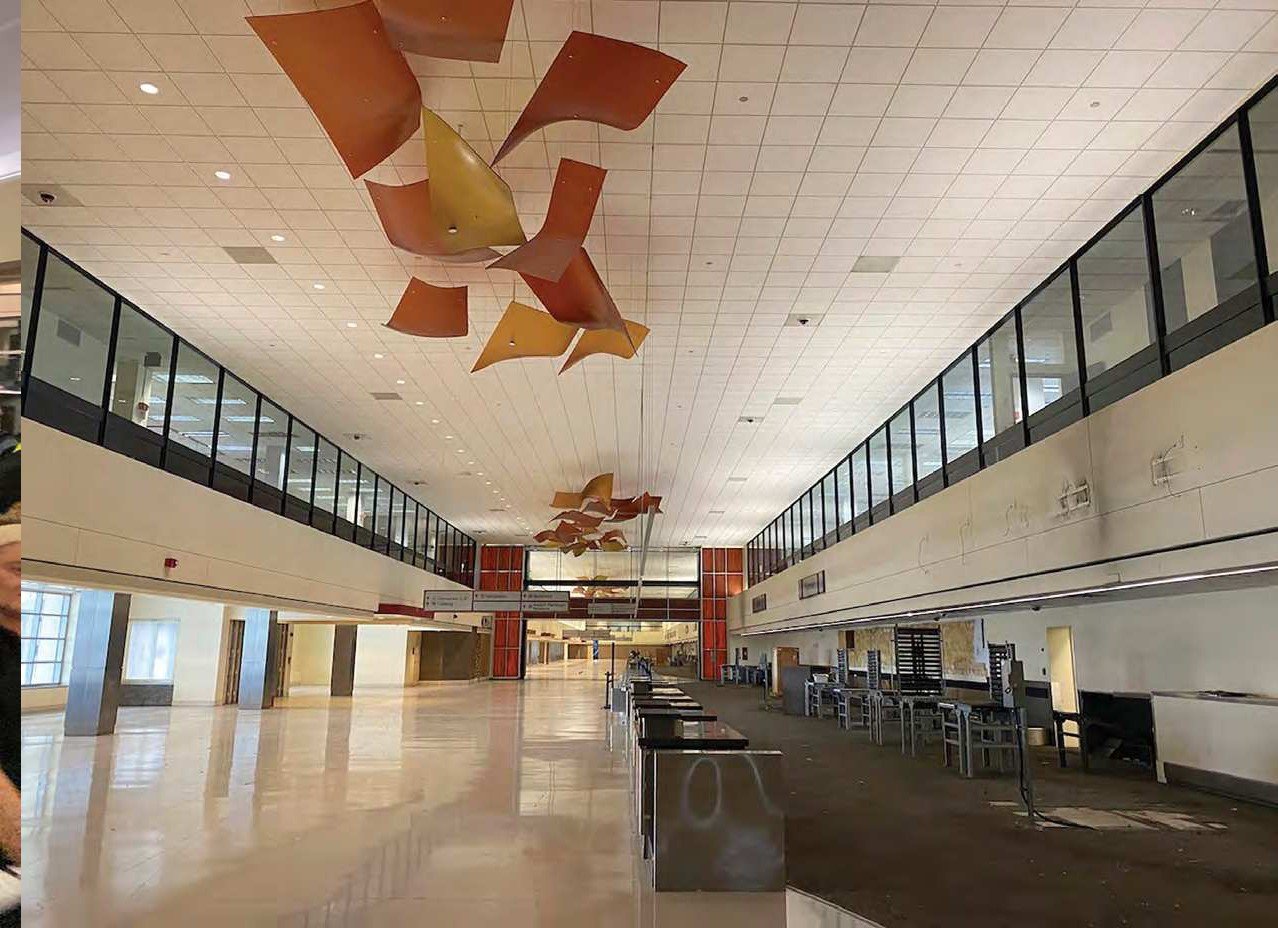 Much of the 1.2m sq ft of terminal will eventually meet its demise, with the original 1950s-era main departures hall and Concourse A and B earmarked to be the first to fall to the wrecking ball, some time over the next 18-24 months.

This demolition won’t be as straightforward as it might seem, as Jamie McCluskie, deputy director of Aviation – Planning and Development, explained: “Our architectural team is going through the terminal, figuring out how to break down a building with multiple generations of construction that makes it a little bit complex.” 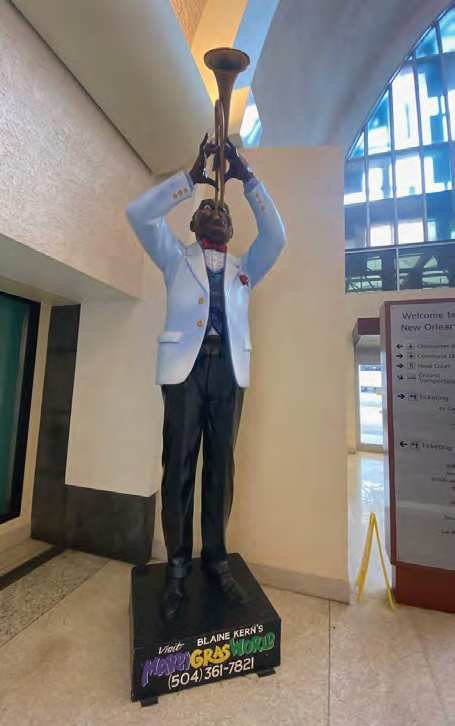 The old MSY still exhibits a faint pulse. Much of the building continues to be maintained and powered up because the airport’s administrative offices, emergency operations centre, law enforcement offices and maintenance shops remain here – and they will do so for some time, their move across the campus having been delayed by the COVID-19 pandemic.

In the meantime, the sprawling terminal has found a temporary second life as a location for TV and film productions, which provides a revenue stream. Television shows including NCIS: New Orleans and The Amazing Race have both used the facility. The airport director says laughingly of the latter that he “tried to convince the producer to put clues in my office, but they didn’t end up going for it”.

Boarding of a different kind

In May, Red Bull temporarily transformed the terminal’s parabola, baggage claim and concourse D into a skateboarding park. The parabola was the ‘hero location’, with modified escalators for skaters to roll down and a custom-designed vertical wall set against the iconic mid-century glass. The baggage claim section brought every skater’s video game fantasy to life, as the carousels were covered in plywood with added rails, ledges and ramps, transforming the monotonous belt system into a skating playground. Concourse D mimicked a runway built for speed, offering skaters a long hallway and a smooth surface for racing.

Red Bull athlete Jake Wooten was one who appreciated the transformation. He said: “We spend so much of our lives in airports as pro skaters… We take fourhour layovers and daydream about what could be done on our boards. I look at stairs and rails. They’re the smallest architectural features but a skate spot is all I see. The fact that Red Bull was able to make it happen and turn an old airport into a park is like something out of a video game.”

The relatively new Concourse D and its ticketing headhouse, which originally opened in 1996, will be repurposed for charter flights and possibly for use by a fixed-base operator (FBO), while the parking structures and relatively new off-site rental car facilities remain operational and will stay that way. Part of the terminal will be permanently preserved and repurposed, including the iconic 1959 parabola dome structure. McCluskie noted: “In New Orleans we have a lot of value for historic buildings, and [the old airport building] certainly has a lot of history, so we're all for retaining that as part of future development plans.” 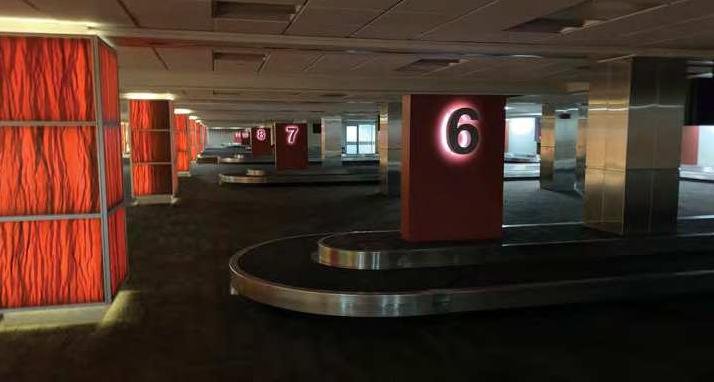 Surplus to requirements, the baggage hall is now deserted, dark and eerie 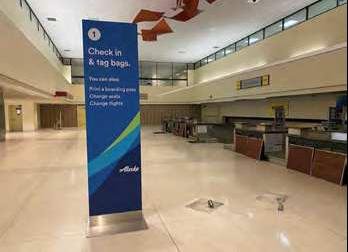 A massive logistical effort was conducted to transport items such as self-check-in terminals, signage and other items from the 1950s hub to the 21st century gateway 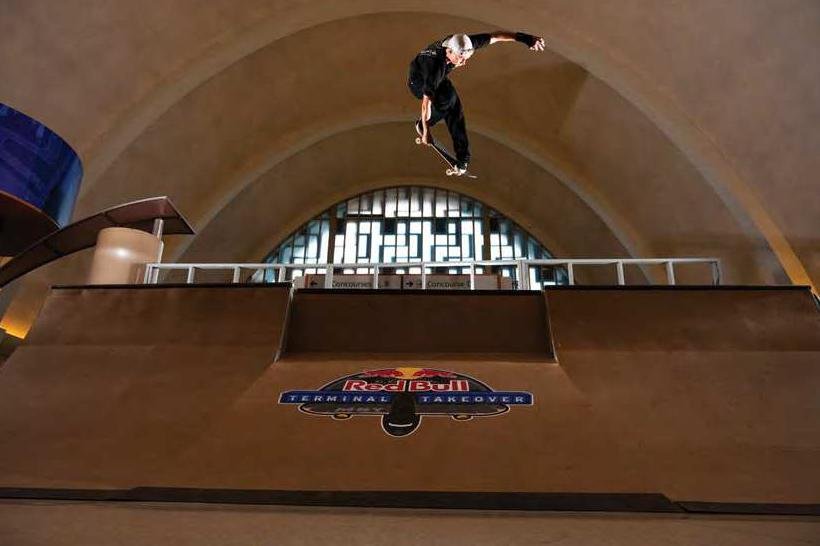 Part of the masterplan

With a small hemmed-in site area of 1,700 acres, redevelopment of the current terminal’s footprint is crucial to the economic future of both the airport and the region.

The airport is included in a 20-year development masterplan that seeks to redeploy the old terminal’s footprint into space for hangars for MROs, cargo sorting, a logistics hub for companies such as Amazon and UPS, and even a light railway system to connect to the current terminal. “We're going to be very prudent about how we go about this and be very thoughtful looking forward,” said Dolliole.

As he oversees the long, slow goodbye to the old MSY, Dolliole knows it has had its day, concluding: “The new terminal kind of makes you forget about the old one. I just sold a car that I had owned and loved for 13 years. I almost cried when I walked away from it. But then the first time I drove its replacement, I forgot all about that old car.” AI