Spain’s Ejército del Aire staged Exercise DACT 2017 in the skies over the Canary Islands between January 13 and 27. Roberto Yáñez and Alex Rodríguez were there 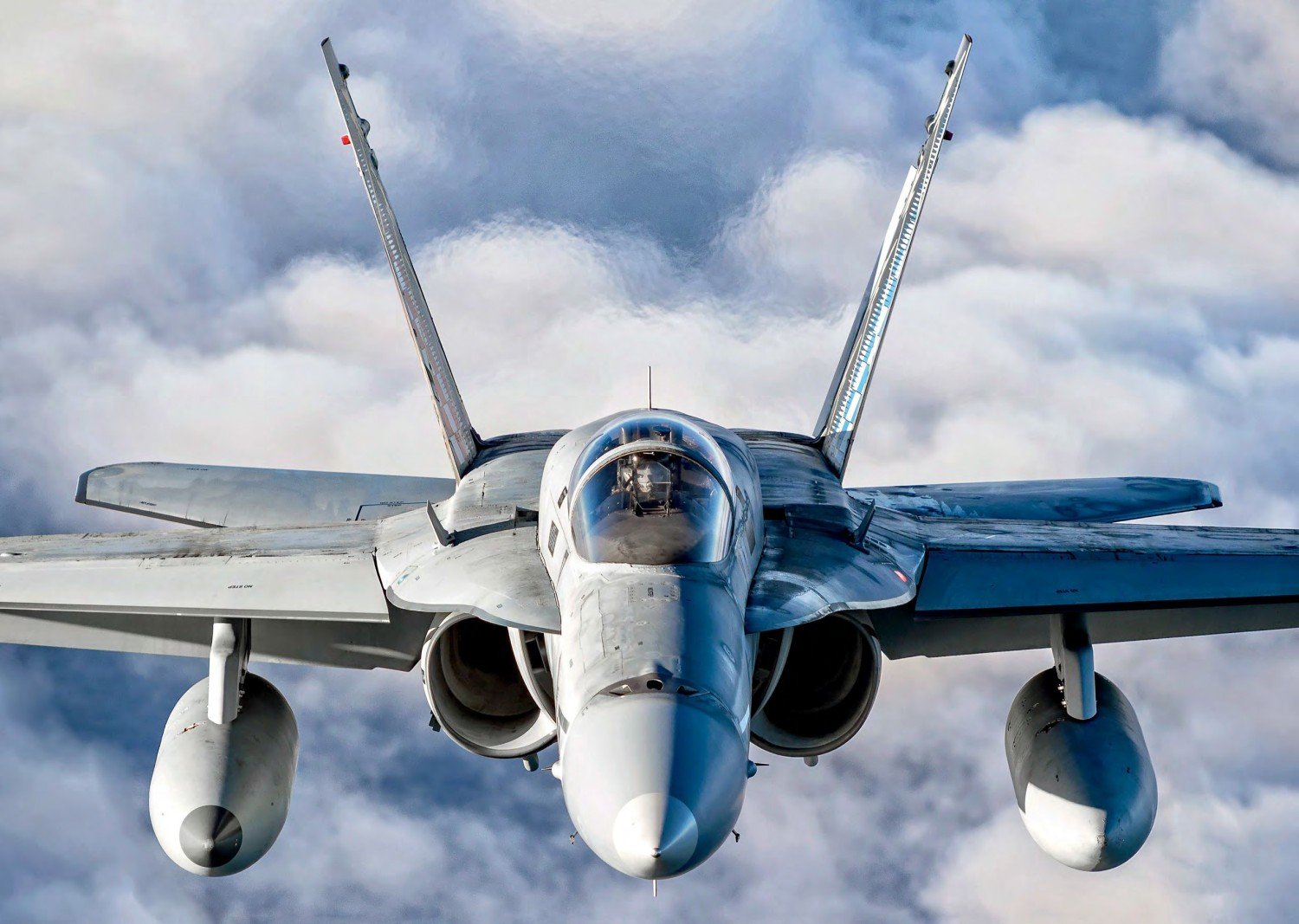 462 Escuadrón, equipped with the F/A-18A+ Hornet, is tasked with air defence of the Canary archipelago and maintains fighters on quick reaction alert 24/7, 365 days a year. All images Roberto Yáñez unless noted otherwise

DACT (which stands for dissimilar air combat training) is the largest Spanish advanced airto- air training exercise undertaken each year involving aircraft from all Ejército del Aire units. Unlike earlier iterations, this year’s exercise did not feature an initial phase – called DACEX – which involved air defence of the Canary Islands. This year, DACEX will form part of Exercise Sirio, a national air defence exercise due to take place in June. 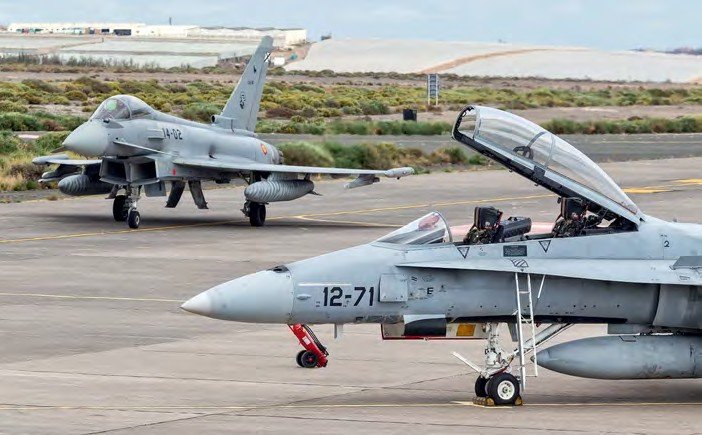 An Ala 14 Eurofighter from Albacete makes its way to the runway for a day time Shadow mission. 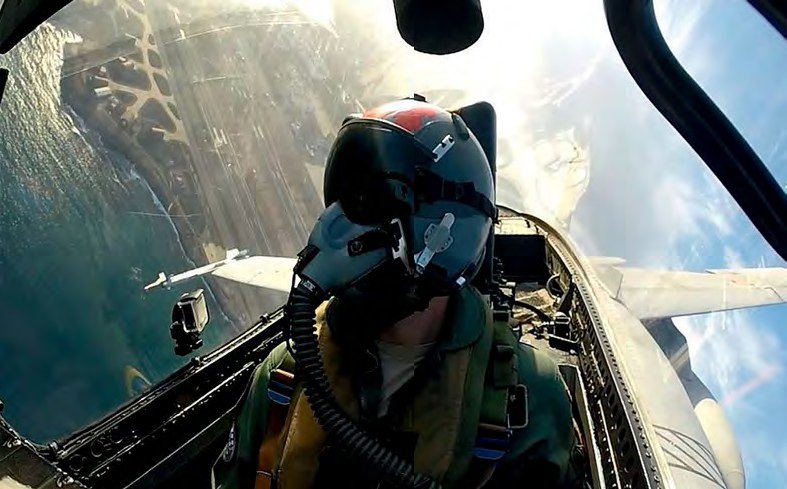 The Canary Islands offer an ideal environment for undertaking dissimilar air combat training due to the good weather and large areas of unrestricted air space for manoeuvring. Ejército del Aire 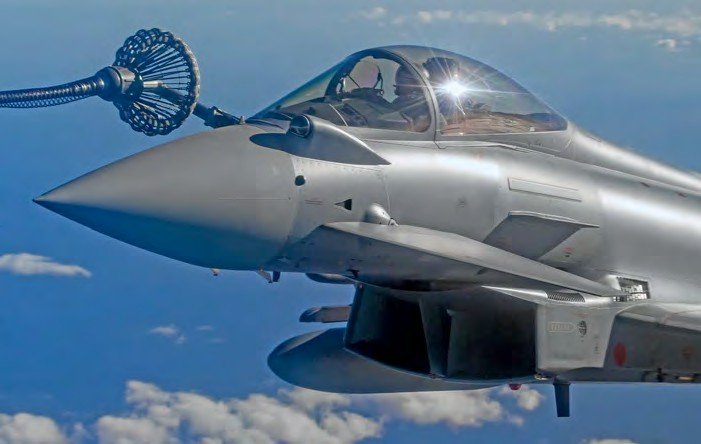 A new Ala 14 Eurofighter lacking a unit code on the fuselage.

Mando Aéreo de Combate (MACOM, Air Combat Command) was charged with the planning, direction and execution of DACT 2017, and for conducting postexercise evaluation. To do this it counts on the support of Mando Aéreo de Canarias (MACAN, Canaries Air Command), which is responsible for supporting units temporarily and permanently deployed from the Iberian Peninsula.

MACAN also contributed its own flying units assigned to Ala 46 based at Gando Air Base, the F/A-18 Hornet-equipped 462 Escuadrón and 802 Escuadrón tasked with search and rescue. In addition to the flying units, Lanzarote military airfield served as the deployed location for tanker and electronic warfare aircraft.

Control of the exercise took place from the Centro de Operaciones Aéreas Combinadas (CAOC, Combined Air Operations Command) located at Torrejon Air Base near Madrid, from where the missions were planned and programmed through the publication of the respective air tasking order

A series of 2 v 2, 2 v 4 and 4 v 4 engagements were conducted in the area of operations around the Canary Islands before the exercise started. Once the exercise started, the difficulty of each mission was increased and the number of aircraft involved rose to 6 v 8, 10 v 12 and 12 v 14. Such methodology allowed participating crews to be trained in dissimilar air combat missions and mixed-force fighter operations and test the ability of each Ejército del Aire fighter unit to integrate and operate in joint air operations with allied nations. 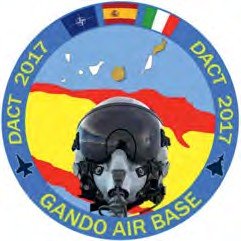 Grupo 47 provided a Falcon 20ECM, Ala 31 sent a KC-130H Hercules and 802 Escuadrón provided SAR support with a CN235 VIGMA and an AS332B. Getafebased Ala 35 also sent a C295M to role play as a high value asset and slow mover. International participants were three Aeronautica Militare F-2000s and a single NATO E-3A Sentry.

Although five separate fighter wings took part in the exercise, the Ejército del Aire currently only operates two types of fighter: Eurofighters and F-18s. DACT 2017 created a chance integration of maintenance operations by forming two common maintenance teams, one for the Eurofighter and another for the Hornet.

Because of its base in the Canary Islands, the exercise also served as a test of the Ejército del Aire’s ability to deploy aircraft to locations away from the Iberian Peninsula, something that could not have been undertaken without the support of the Segundo Escuadrón de Apoyo al Despliegue Aéreo (SEADA, Second Aerial Deployment Support Squadron) from Morón Air Base near Seville. SEADA provided force protection, deployment and airlift operations support. Preparations for deployment of participating units began at the end of December 2016 with shipping, by land and sea, of vehicles and equipment needed to among other things install the work modules used by crew to plan their mission.

Exercise DACT 2017 was divided into four phases. Phase 1 or the pre-deployment phase served to undertake smaller scale dissimilar air combat training. Phase 2 involved deployment of the fighter units from the mainland and included two days of academics, during which a series of lectures were given by each participating unit highlighting the capabilities of its weapons system and tactics used during air-to-air combat. Phase 3 was the live for the Ejército del Aire to test stage, characterised by missions of increasing complexity during a two-week period. 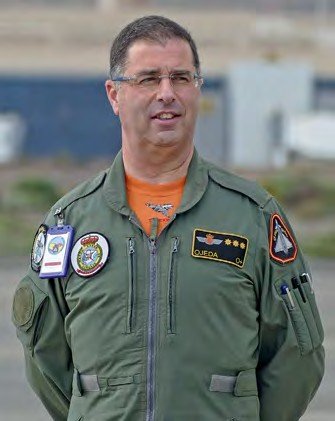 Search and rescue missions were flown by a CN235 VIGMA from 802 Escuadrón; the unit’s Super Pumas were maintained on alert to provide SAR coverage during the whole exercise. 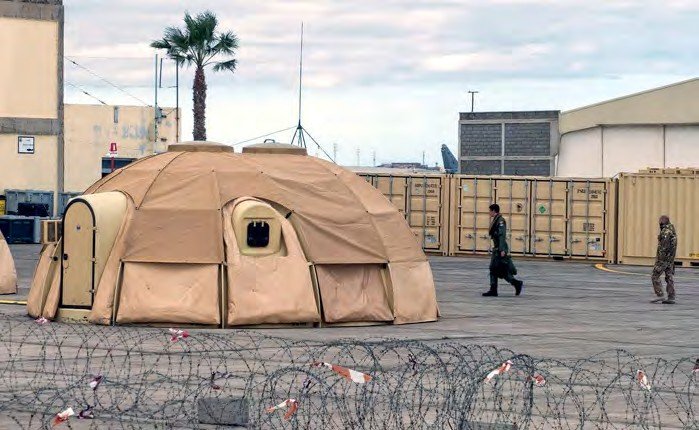 Finally, Phase 4 involved the return of the units to their home bases – and involved participation for the first time of the Ejército del Aire’s only A400M operated by Ala 31 based at Zaragoza Air Base.

Area D79 was reserved for the exercise, a 150 x 200 nautical mile (275 x 370km) area of the Atlantic Ocean located south of the Canaries archipelago. D79 offers unrestricted airspace free of airways and population centres, something not available in mainland Spain, that allows combat level training at supersonic speeds. Airspace was divided into two sectors: east and west.

Daily flight operations comprised two flying periods. The morning period was named Shadow and involved 6 v 6 and 6 v 8 engagements in both sectors; the afternoon period was named Main and used all of the D79 complex to conduct a single complex mission with up to 26 aircraft.

Like other NATO standard air exercises, DACT 2017 had an Air Boss who during the Main missions was responsible for defining the air battle scenario in which the engagements would take place.

Units planned their mission to meet the requirements of the scenario in accordance with their respective allocation to either the opposing force (OPFOR) or the defending force (ALLIEDFOR).

MACOM’s goal was to evaluate the ALLIEDFOR, so rules were set to help the units achieve the objectives set by the Air Boss. During the Main missions, the NATO E-3A AWACS was tasked with monitoring the ALLIEDFOR, while ground control intercept controllers from the Grupo de Alerta y Control (GRUALERCON, Warning and Control Group) controlled the OPFOR.

All information collected from each mission was analysed post-mission to highlight any errors made and to improve tactics and procedures for subsequent missions. Debriefing of this nature was enabled by setting up a secure video conference channel between Gando and Lanzarote aerodrome where the AWACS was based.

The Ejército del Aire is determined to accommodate requests for participation by other units from other countries working on a 24-month planning basis, Next year’s exercise is likely to be staged in November to meet the interest shown by other air arms based on the high quality of training received by participant aircrews to date. 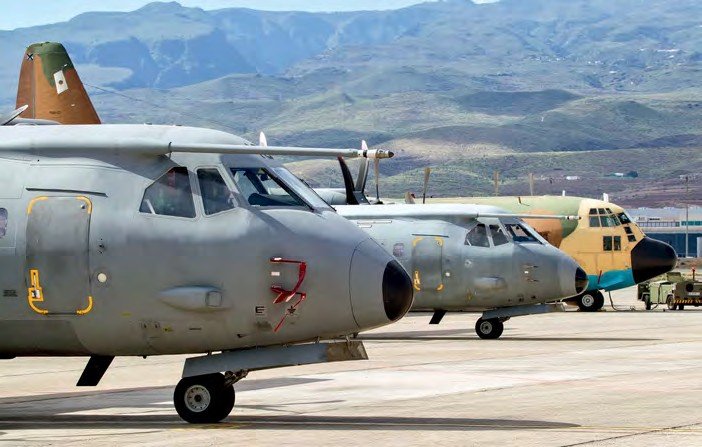