Lynx AH9A ZF538 was the last of the four-ship formation to land back at Odiham, in a snowstorm, on January 16, 2018. Ian Hardin

IT IS hard to believe that almost 47 years after the maiden flight of prototype Westland model WG13 on March 21, 1971, the Westland Lynx helicopter has been retired from UK military service. At 15:20hrs on January 26, 2018, the final two Lynx AH9As in service with Army Air Corps, 657 Squadron based at RAF Odiham, Hampshire, touched down at nearby Army Aviation Centre Middle Wallop following their final flight. Shutdown at Wallop ended the type’s Army career stretching back almost 40 years.

After a long and distinguished career, it was fitting the British Army should pay tribute to its iconic British helicopter. Classed as a battlefield utility helicopter, the Lynx has proven its value around the world in a variety of locations from the freezing plains of Northern Canada, the steaming jungles of South East Asia and Central America, the subzero environment of the Arctic and the dust bowls of the Middle East.

Lynx production for the British Army totalled 144; 113 Lynx AH1s, four Lynx AH5s, 11 Lynx AH7s and 16 Lynx AH9s. Many were upgraded during their operational life times. Deliveries of the original 16 Lynx AH9s commenced in 1990, completing in mid-1992. Of the new-build Lynx AH9s, 15 were available for upgrade to AH9A standard following the loss of one cab.

The UOR comprised two contracts, one for an initial 12 announced in December 2008, and a follow-on contract for ten announced in March 2010. The first Lynx AH9A ZG916 flew from the Westland facility at Yeovil, Somerset on November 12, 2009 (less than one year after contract signing), and the first aircraft arrived in Afghanistan during May 2010 (less than 18 months from contract award).

To mark its decommissioning from British Army service, 657 Squadron flew four of its remaining eight Lynx AH9As (including one with commemorative markings) from RAF Odiham on a final flypast tour around southern England, the Midlands and East Anglia on January 16, 2018.

Army Air Corps 657 Squadron is part of the UK’s Joint Special Forces Aviation Wing based at Odiham, along with the RAF’s Chinook HC6-equipped No.7 Squadron. The first Lynx AH9A arrived at 657 Squadron in 2012. Conversion from Lynx AH7 to AH9A was completed in 2014. During May, 657 Squadron is expected to disband and is unlikely to re-form. 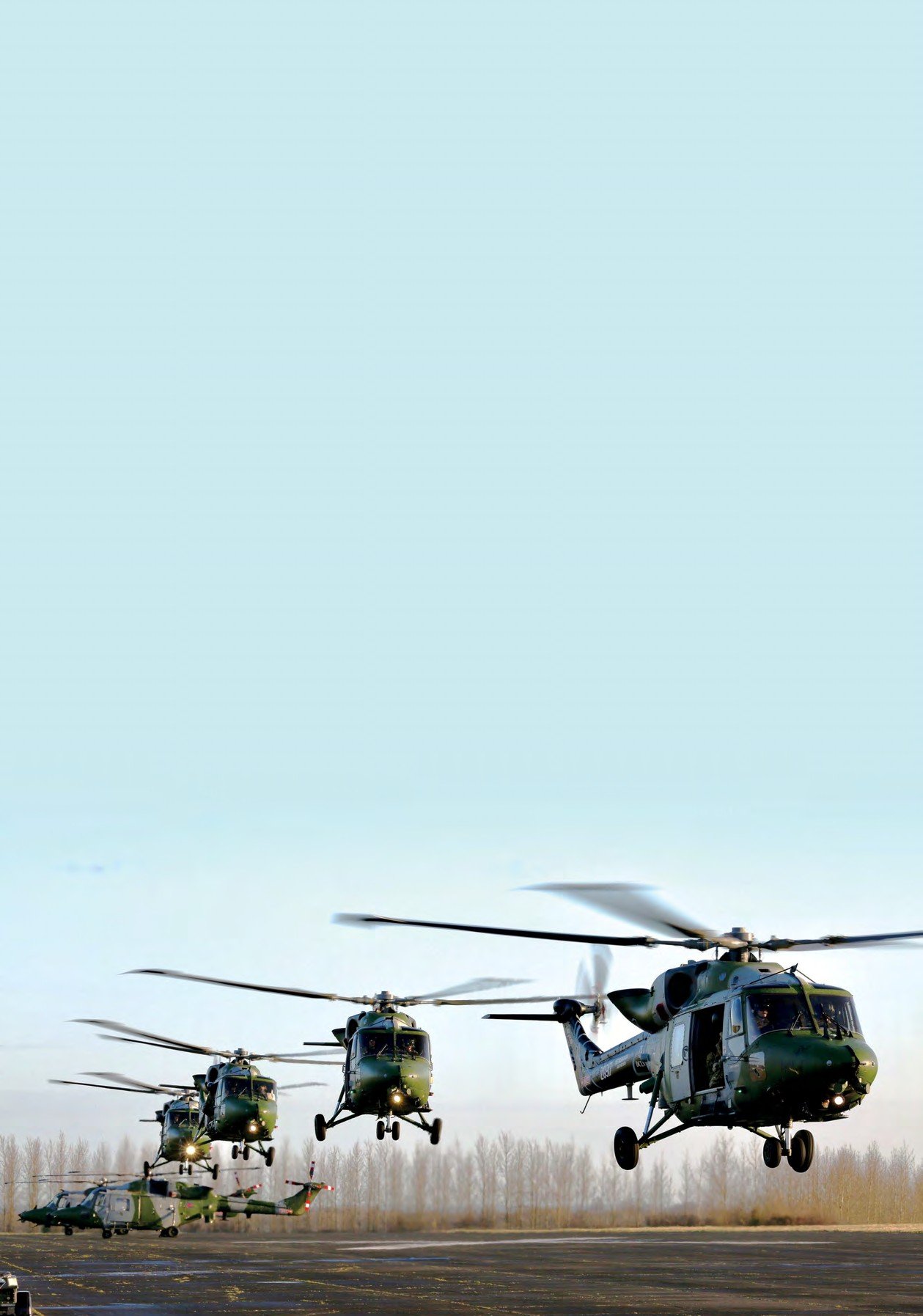 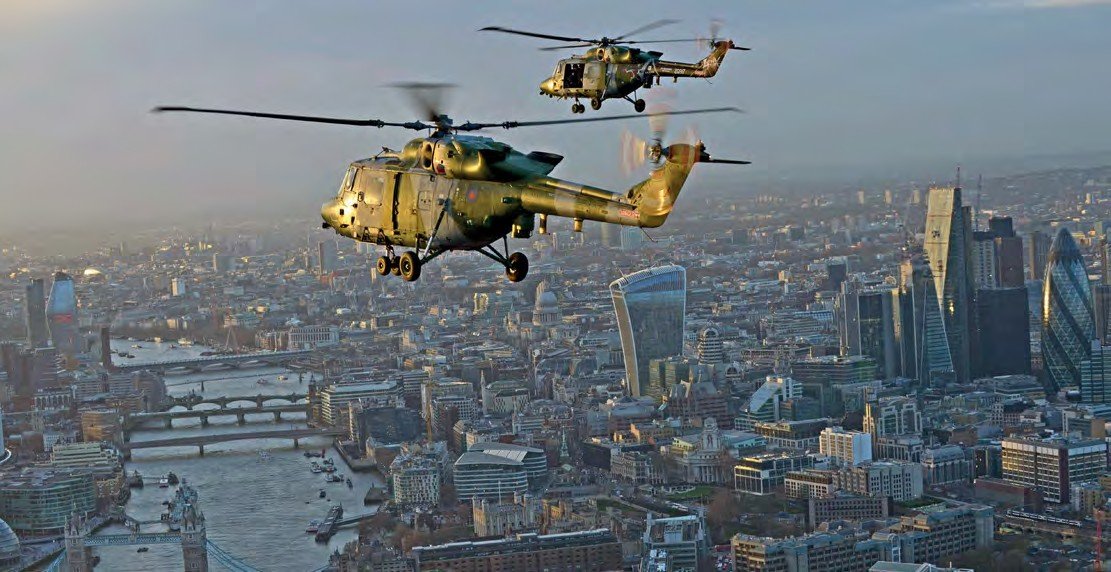 The route flown included Tiltonon- the-Hill, Leicestershire, where Lynx AH7 XZ199 crashed near the village on May 18, 1999. The four Lynx made a couple of passes over the crash site in memory of Sergeant Major Andrek Prenczek, Staff Sergeant Stuart Donnan and Staff Sergeant Peter Clyne who all lost their lives in the crash.

The four helicopters returned to RAF Odiham at 16:30hrs in a snow storm; fortunately, the weather along the majority of the 460-nauticalmile (248km) flight was good.

All remaining airworthy airframes were flown to AAC Middle Wallop over the following couple of weeks, where they will be dismantled. All usable parts, most notably the aircraft’s uprated engine and transmission system, will be used in the Wildcat donor programme. The last two aircraft were flown to AAC Middle Wallop on January 26, 2018, including aircraft ZG917 with the commemorative markings.

Flown by Major Jim Peycke, the Commanding Officer of 657 Squadron, ZG917 was donated to the Museum of Army Flying.

Less than a year since a similar flypast undertaken by the Fleet Air Arm to mark the retirement of the Royal Navy Lynx HMA8 in March 2017, Major Peycke was in a reflective mood when he spoke with AIR International prior to leading the formation flight He said: “Bidding farewell to such an iconic machine is a huge moment for everyone who has flown the Lynx over many years. The aircraft has had such longevity within the British military, this moment is difficult to describe. It really is a multifaceted, multi-role aircraft, which has been at the forefront of Air Corps flying around the world. It is such a great aircraft to fly, great fun and highly manoeuvrable [due to its semi-rigid titanium rotor head]. Its utility meant it could complete all the roles required of it from intelligence gathering [and] underslung load lifts to personnel carrying in almost any environment and weather. Its size meant it could fit into most landing sites and, importantly, you could quickly dismantle and transport two to any location around the world in the back of a C-17, and rebuild them in a few hours. The Lynx was a real Jack-ofall- trades and the type of aircraft you therefore want in theatre. Its utility made it viable for any situation.”

Major Peycke is a former Lynx AH7 pilot and is well placed to make a comparison to the Lynx AH9A, an upgrade that materially enhanced the aircraft’s capability.

He said: “I would describe the AH9A as everything the Lynx should have been at the start. The change following the Afghan UOR was marked. When you combined its capability with the power the new uprated engines and transmission provided when operating in hot and high environments, it just outperformed other aircraft. It operated perfectly [in Afghanistan] and also in the temperate jungle environments we served. As a final overseas exercise, we completed jungle environmental and pilot skills training at the end of November 2017, which was great for everyone being so close to the end of the squadron. There was never a dull day flying a Lynx.”

The Lynx AH9A is a tough act to follow, but the baton has been passed to the Wildcat AH1 battlefield reconnaissance helicopter equipped with modern, superior avionics, powerful engines and improved capability. Battlefield requirements are changing and the Wildcat is set to prove a formidable force in the future. Its flying capabilities are impressive, but its role is more focused on reconnaissance and intelligence gathering, and less as a utility helicopter. 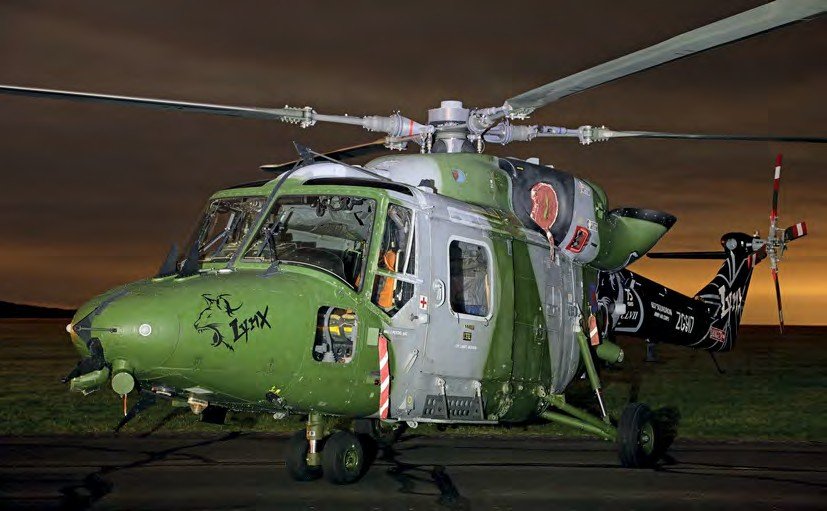