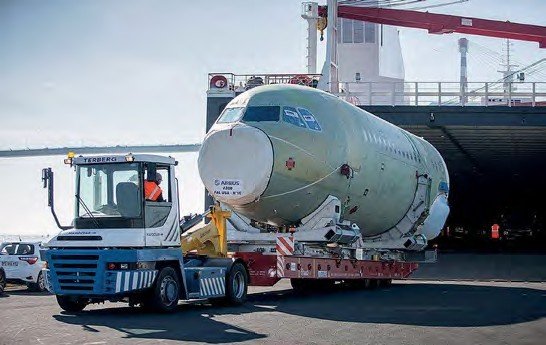 AIRBUS HAS inaugurated a new link in its international transport infrastructure that carries major A320 Family subassemblies from Europe to the United States.

The Mobile Express is a large ship that transports subassemblies from Saint-Nazaire in France to Mobile, Alabama, where A320 Family jets are produced at the Airbus US Manufacturing Facility located at the Mobile Aeroplex in Brookley, adjacent to the Gulf of Mexico.

The Mobile Express, which had its inaugural voyage in February, crosses the Atlantic once per month carrying fuselage sections, wings, engine pylons and vertical and horizontal stabilisers to sustain the ramp-up of Airbus’ jetliner production at Mobile.

The Mobile Express name was chosen based on contributions of Airbus employees at Saint-Nazaire and Mobile, along with Airbus’ logistics and transport community and the ship’s owner. The ship, built in Italy, weighs 5,600 tonnes and is 180m (590ft) long.

The Airbus US Manufacturing Facility was opened in 2015 and builds A319s, A320s and A321s. The Mobile Aeroplex also has an Airbus engineering centre specialising in cabin and cargo systems for aircraft across Airbus’ product line. A new final assembly line for the A220 is also currently being built at Mobile.