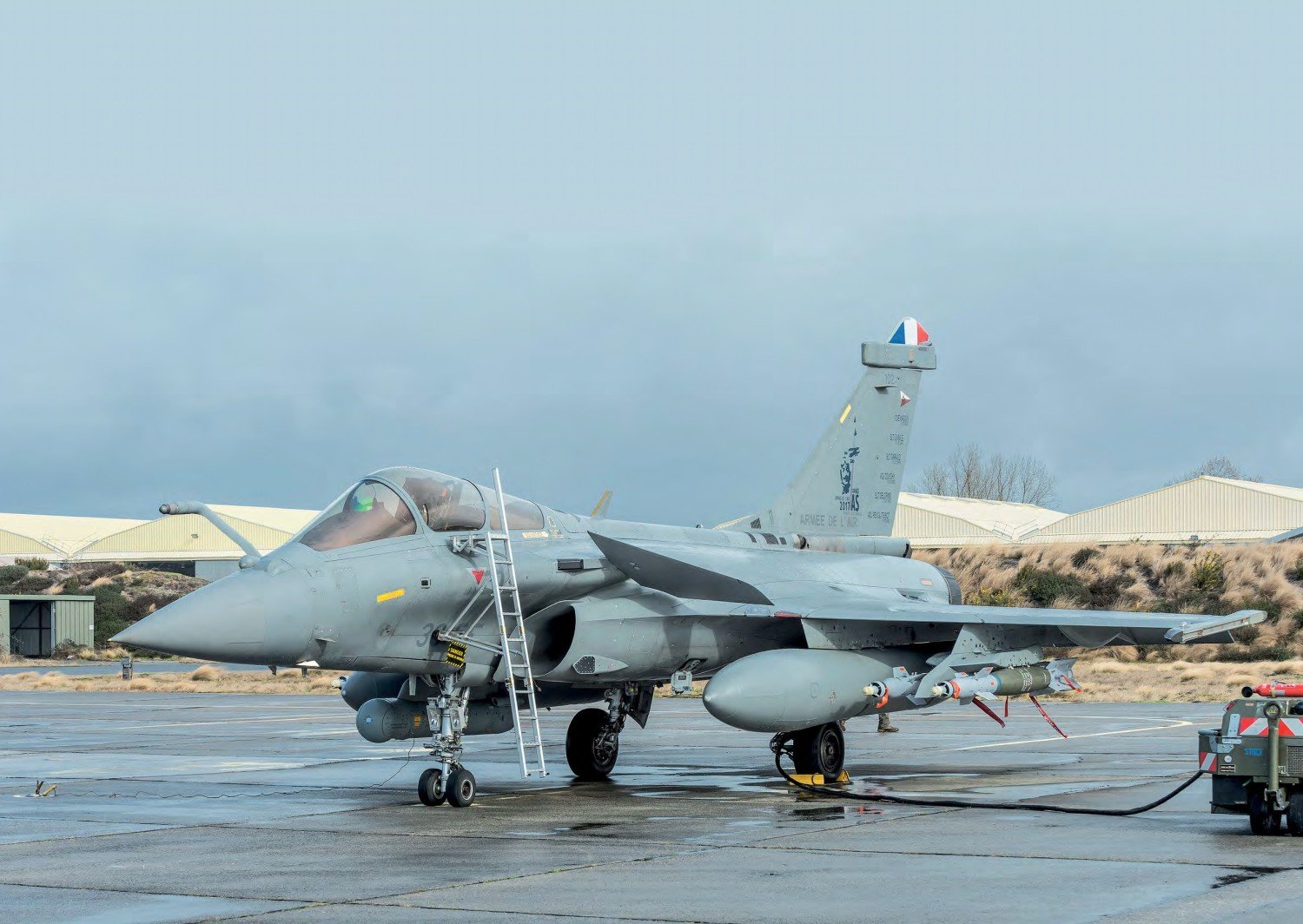 Rafale C 102/30-EF had tail artwork applied back in November 2017 for an event at BA705 Tours to commemorate the Armée de l’Air’s aces.

Three Rafale fighters were deployed to BA120 Cazaux to drop live ordnance on the ranges at Biscarrosse, a Direction Générale de l’Armement site off the coast south of Cazaux, at Captieux near Mont de Marsan and at Île du Levant in the Mediterranean. A further three Rafale fighters were allocated for practising live firing the Rafale’s NEXTER 30M791 30mm internal cannon. The aircraft remained at Mont de Marsan for two reasons: if an aircraft encountered a technical problem, the cannon could be transferred to another aircraft in 90 minutes; and the armourers only need 15 minutes to load or unload the cannon, meaning the aircraft could also be used for training flights in between the planned sorties to the range.

Cazaux hosts the l’École de Transition Opérationnelle ETO 0/8, a lead-in training school for future Armée de l’Air (French Air Force) pilots, and Escadron d’Hélicoptères 1/67, but the base also conducts an essential weapons training role. Every French fighter pilot and navigator learns how to employ weapons at Cazaux; Alpha Jets assigned to the ETO can be equipped with a 30mm cannon pod and F4 practice bombs.

Currently, trainee pilots only fire the cannon during air-to-ground training because air-toair firing, which took place over the ocean, is suspended until further notice.

Cazaux also hosts the Centre d’Expertise de l’Armement Embarqué, which is the centre of armament specialists for all armaments in Armée de l’Air service who are responsible for analysing the use of weapons during ongoing military operations in order to provide essential feedback on revisions to employment techniques and procedures to the squadrons.

Cazaux is also home to a specialised unit, referred to as the Ecole de Tir, which has been training aircrew to shoot at moving targets since 1915. Essential Armée de l’Air training units are located in southwest France, because they were the furthest from enemy lines during World War One. 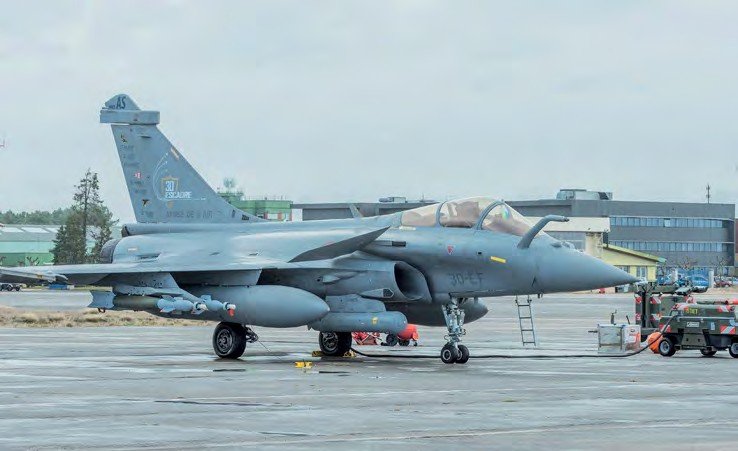 Several missions were cancelled due to bad weather because of target obscurity over the firing range.

Today, BA120 hosts annual live firing deployments from every Armée de l’Air fighter squadron. Base commander Colonel Wencker explained that Cazaux is ideally located near two ranges and has the appropriate infrastructure to host deployments. He said: “The flight time to Captieux and Biscarrosse is only four minutes. During a four-month period, we host all of the Air Force’s frontline squadrons for a two-week deployment.

Most of the armament is dropped at Captieux, but we also use the Biscarrosse range for more complex weapon release scenarios or heavier ordnances. These types of armament cannot be dropped over land for security reasons.”

It has approximately 50 armourers assigned who are in charge of changing, testing and arming the Rafale’s cannon, maintaining ejection seats and all other systems with pyrotechnics.

Armée de l’Air armourers are heavily tasked for exercises and overseas operations, and can be deployed twice a year for a two-month period. To be declared operational, armourers have to undergo an academic course and then, on at least four occasions and under strict supervision, they must observe qualified personnel handling, loading and unloading armaments before they are allowed to load and unload armament. 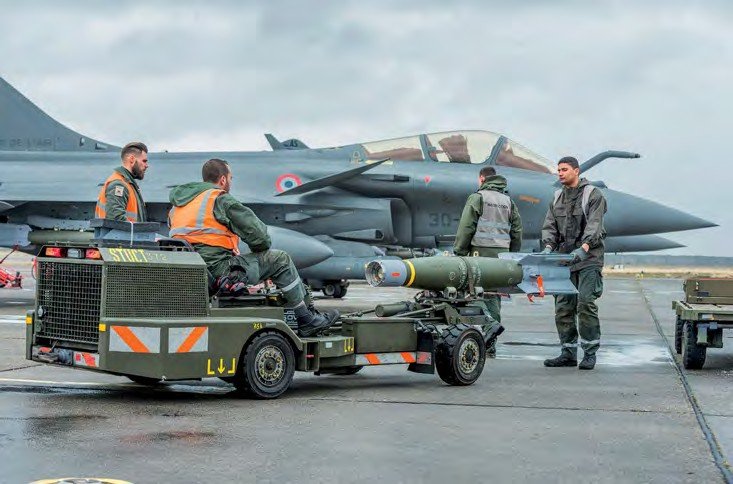 Transporting live weapons is a delicate operation, which is typically carried out by three to four personnel. 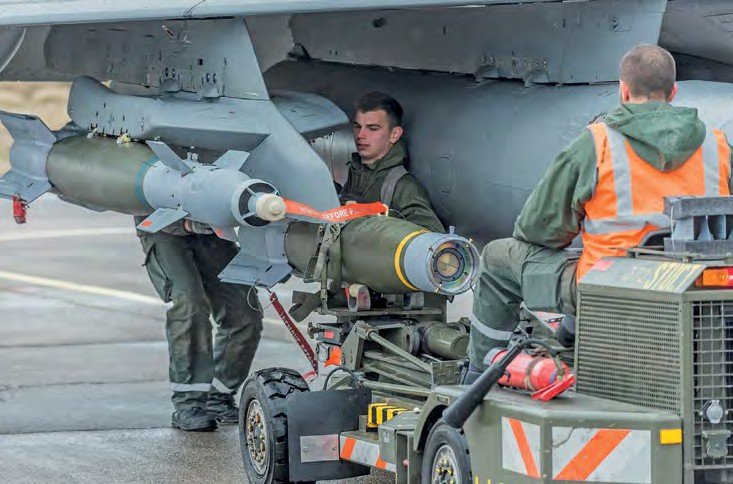 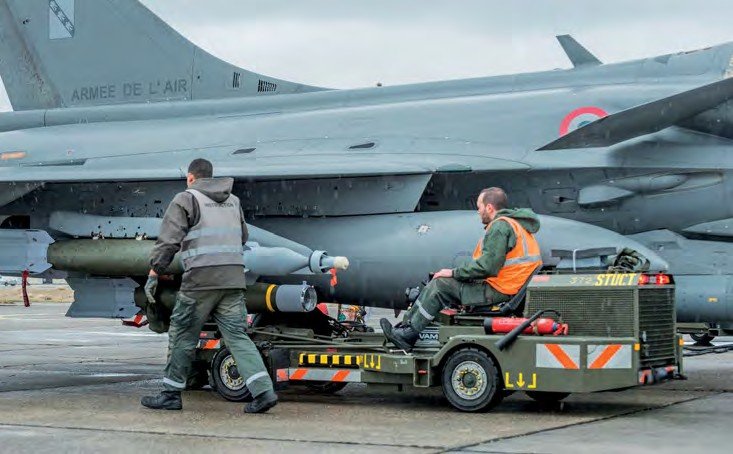 Forty pilots from RC 2/30 and EC 3/30 travelled to Cazaux whenever they were scheduled to fly. The exercise goal was for every pilot to drop several practice bombs and one live bomb, and to fire approximately 200 to 250 rounds with the cannon. During different sorties crew dropped a variety of ordnance such as laser-guided training rounds with the same ballistic characteristics as a 500lb GBU-12 Paveway II, 2,000lb GBU- 24 Paveway III and different variants of the Armement Air Sol Modulaire (AASM), also referred to as smart bomb units, such as the AASM-GPS (SBU-38), AASM-Laser (SBU-54) or AASM-Infrared (SBU-64).

Colonel Fonck, commander of RC 2/30, explained why air-to-ground deployments are important for Rafale units: “We are omni-role units and have to train for multiple tasks. It is important to be able to focus on each of these tasks, so we typically reserve a number of days or weeks to train for specific competencies. It’s a period during which our younger pilots, as well as our more experienced pilots, will focus on refreshing their knowledge of procedures and train for new ways of delivering armament. The Rafale is a platform that is continuously evolving, so we might train things today that were not possible a year ago.”

For younger pilots, the live firing exercise is the first time they will drop live bombs, as Colonel Fonck explained: “There are some emotions involved when you drop your first live bomb, and it is better to experience and master these emotions at home before being deployed for an overseas operation. It is a stressful moment when you turn the master arm switch that arms the bombs and allows the pilot to drop the weapons. Most of this stress is built up by the pilots themselves, because there is a score of vital things that the pilot has to do before dropping a bomb. Our young pilots will experience that particular stress for the first time during this deployment. That is why these exercises are crucial for them, and that experience will help them throughout their career.”

Describing the event from an experienced pilot’s perspective, Colonel Fonck said: “From my own experience, I can tell you that, even after 1,500 hours on the Rafale, the moment when you are about to drop a bomb is very particular, even in a controlled environment. For pilots who are going to be deployed in the coming months, dropping bombs at the firing range will allow them to better react to the needs of the different players during operations.” 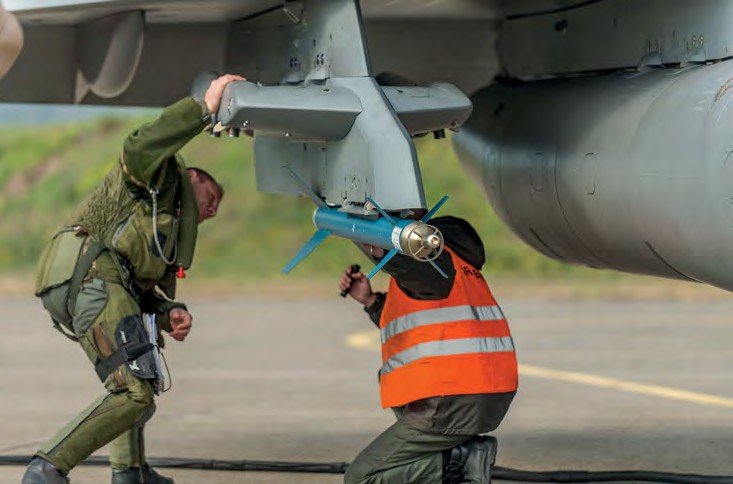 Armourer and pilot check the smoke cartridge of a LGTR. The cartridge detonates on impact to visually indicate the impact point.

”We train and simulate wartime situations every day, so that we react properly whenever we are deployed.”

Colonel Fonck, Commander of the RC 2/30

Colonel Fonck explained some of the Armée de l’Air’s particular requirements: “The service has been very active on overseas operations. We train all year round, because we fly wartime missions on a daily basis. We do not work like many other armed forces who focus on preparation, operation and regeneration. We train and simulate wartime situations every day, so that we react properly whenever we are deployed.”

The live firing exercise is also an opportunity to test new weapons or procedures. Although Escadron de Chasse et d’Expérimentation 1/30 did not participate in the latest deployment, the unit is part of the Armée de l’Air’s operational test unit and did conduct some tests.

Colonel Fonck explained: “They tested improvements to the rigging system for the GBU-12 laser-guided bomb. Following testing, they discuss their findings with the DGA [Direction Générale de l’Armement/ Directorate General of Armaments], before commencing a flight test programme in the near future.”

Colonel Fonck said: “With the new software, we can actually release our ordnance from a racetrack pattern over the target, instead of having to distance ourselves from the target in order to perform a bombing run. This allows us to stay over the target area and to keep a constant visual.”

This evolution in armament will better align aircrew and forward air controllers on the ground, as they can complement each other in terms of situational awareness during close air support missions. As the conventional air-to-ground reference squadron, Normandie-Niemen is responsible for writing the operational manuals used by all other Armée de l’Air Rafale squadrons. Explaining the importance of dropping the new weapon, Colonel Fonck said: “It enhances our knowledge of this new type of armament that we need to write tactical and technical manuals.”

With these updates in the software, the Rafale can now drop both GBU-12s and the entire range of Armement Air Sol Modulaire weapons from a racetrack pattern. If the pilots can use the laser-guided GBU-12 they will, but when the weather conditions are not optimal the AASM-Laser (SBU-54), which can be guided by laser as well as GPS, is the better option. Due to bad weather during the deployment, a number of sorties had to be cancelled.

Although the Rafale is an all-weather fighter, there are limitations in terms of crosswind and visibility for pilots when illuminating their own targets, firing the cannon or dropping unguided ordnance. However, Colonel Fonck did send his pilots out despite bad weather conditions, whenever there was a chance of gaining a visual of the target area: “During wartime sorties you fly in bad weather. These conditions force the pilots to find alternative ways to deliver their armament within the strict criteria within which we operate. So, if there is a chance of learning something from flying in bad weather at home we will use that opportunity.”

Squadrons assigned to the 4e Escadre de Chasse (4th Wing) at BA113 Saint-Dizier replaced those from Mont de Marsan, to optimise use of Rafale-specific ground equipment on back-to-back deployments. AI 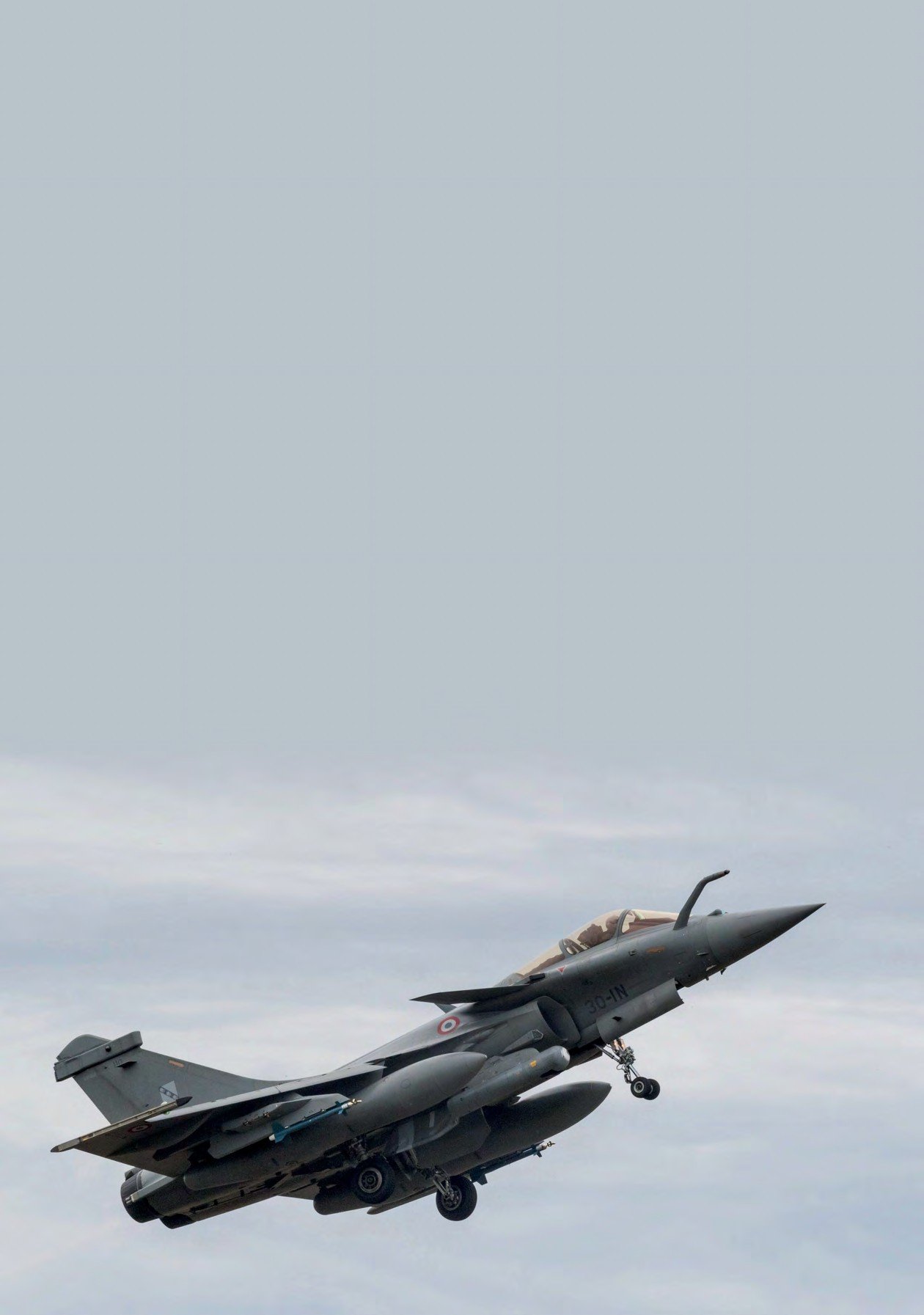 A Rafale from EC 3/30 takes off from BA120 Cazaux with LGTRs loaded on each under wing pylon.
Quentin Langlais/Armée de l’Air