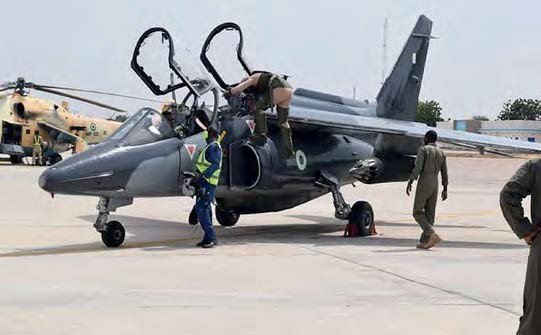 Alpha Jet A NAF452 was built in Germany and delivered to Nigeria in 1981. It has recently been refurbished after the new Nigerian government pledged to invest in defence and resurrect aircraft that have been left to rot for decades. In addition to the 68mm SNEB rocket pods this jet is carrying an under-fuselage gun pod.
Nigerian Air Force via Guy Martin

The Nigerian Air Force (NAF) has taken delivery of another Alpha Jet it acquired from Air USA Inc. The aircraft NAF476, thought to be the former 40+78 and N78XA was seen transiting Madrid and Manchester airports on December 4, 2018 before arriving in Nigeria on December 6. The US government approved the sale of four privately-owned former Luftwaffe Alpha Jets to the Nigerian Air Force in 2015. Two Alpha Jets (NAF475 and NAF477) were delivered from the United States in March and May 2015, and a third (NAF478) in June 2016. NAF 477 is known to be the former Luftwaffe 40+88 and N88AX but the tie ups between the Nigerian and German serial numbers is not known for most of the newly acquired aircraft. Photographs of a fifth, of unknown provenance, NAF474 exist. The rest were acquired from Air USA Inc, which specialises in military air combat readiness training. Air USA Alpha Jets were converted for night-vision goggle (NVG) operations and flight certified for operational use of TER (Triple Ejector Rack), IMER (Improved Multiple Ejection Rack) and SUU-20 bomb racks. However, armament capability was removed prior to their sale from Germany, leading the Nigerian Air Force to retrofit them to carry weapons, including 68mm rocket launchers and unguided bombs. Nigerian Alpha Jets have been used in the ground attack role to strike Boko Haram targets and a couple have been lost on operations: one crashed in Niger, killing two pilots in May 2013 while another went down in September 2014. A total of 24 Alpha Jets were acquired by Nigeria in the 1980s but several have been lost in crashes.