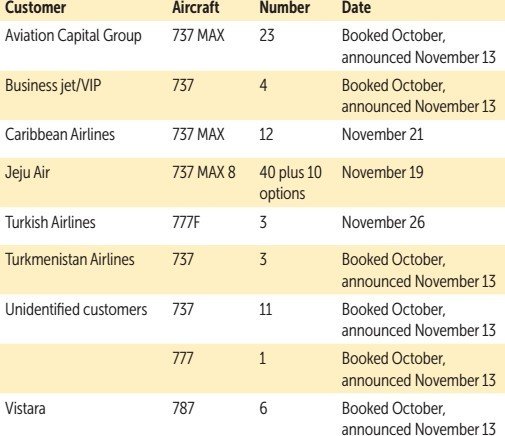 The UK low-cost carrier easyJet has topped-up its Airbus A320neo order by signing up for 17 more A320neos. EasyJet now has 147 A320neo Family aircraft on order, including 17 A321neos. The airline has ordered 468 A320 aircraft over the last 20 years, making it one of the biggest single customers for the family. Mark Broadbent

Ethiopian Airlines has received its eighth Boeing 777 Freighter as it expands its route network. The aircraft arrived at Bole International Airport in November and will be used to bolster the airline’s cargo operations in Africa and beyond to support the airline’s Vision 2025 strategy, said Ethiopian Group Chief Executive Officer Tewolde GebreMariam. Ethiopian Cargo and Logistics Services aims to generate $2 billion of revenue a year by 2025 with 19 freighter aircraft and transport 820,000 tonnes of cargo to 57 destinations. Ethiopian currently serves 44 international dedicated freighter destinations with its 777Fs and two 757Fs. As part of its growth strategy, Ethiopian Cargo opened a state-ofthe- art cargo terminal in June 2017, which gives it an annual cargo capacity of one million tonnes. Guy Martin

Boeing recently delivered its 2,000th airliner to a Chinese operator; the milestone aircraft was a 737 MAX 8 for Xiamen Airlines. Boeing noted that one in every four Boeing airliners goes to a Chinese operator, either through a direct purchase or lease. The company also pointed out that its first 1,000 aircraft for China were delivered over four decades, but that the next 1,000 aircraft were handed over in just five years, a reflection of both growing demand for commercial aircraft in China and rising output rates at Boeing. Mark Broadbent

Turkish Airlines has confirmed it will purchase three more Boeing 777 Freighters to join the four currently in service. The aircraft will be delivered in September 2019, January 2020 and February 2020. Turkish saw a 25% increase in cargo tonnage and a 29% rise in cargo revenues year-on-year during the first nine months of 2018. Since it launched the 777 Freighter programme more than a decade ago, Boeing has sold more than 200 examples of the aircraft to more than 20 customers. The 777F is a development of the 777-200LR Wordliner, the longest-range current-production Triple Seven, and first entered service with Air France Cargo in 2009. Mark Broadbent