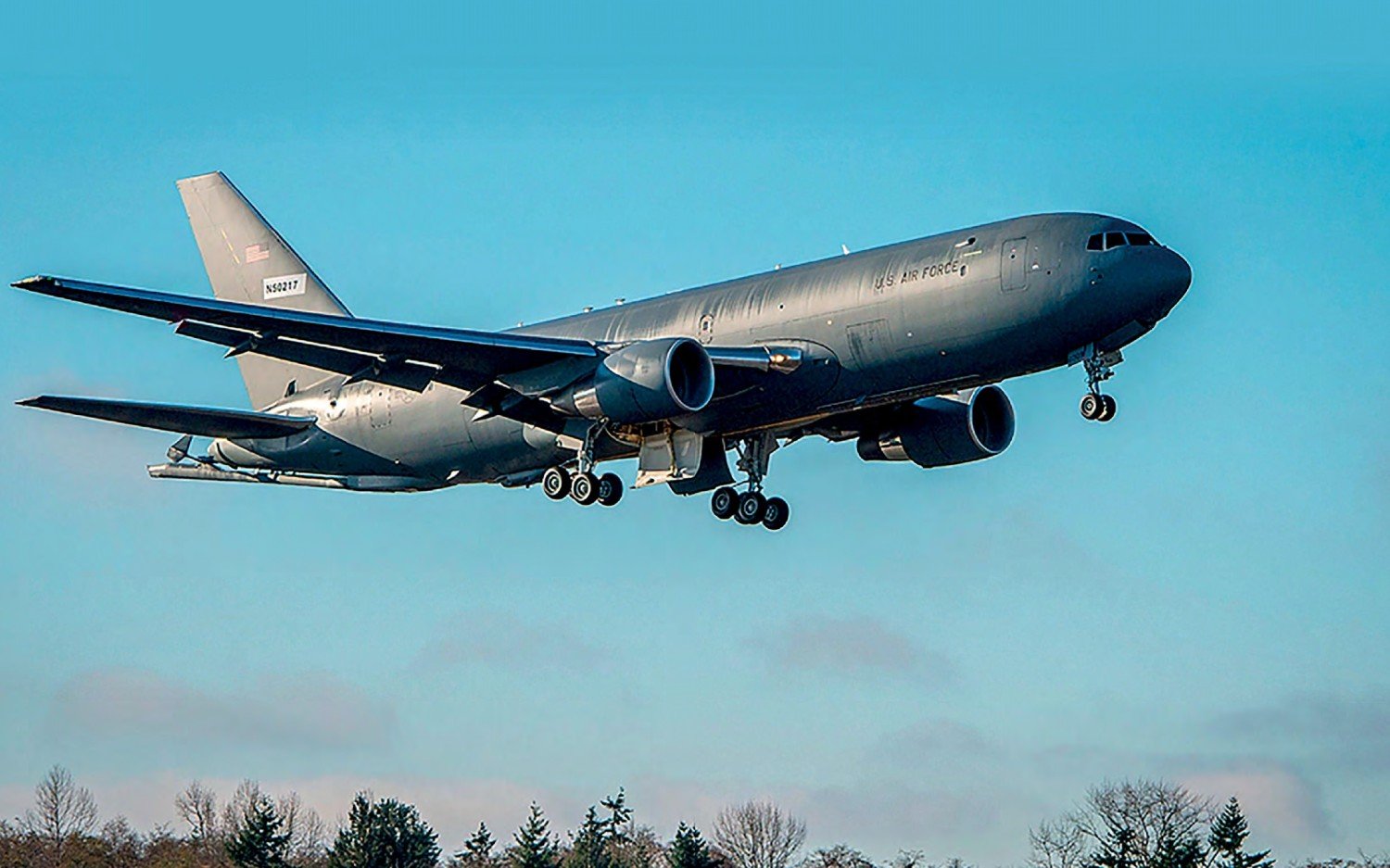 The KC-46A Pegasus continues to be affected by deficiencies and delay to its much-needed service entry.
Boeing

THE BOEING KC-46A Pegasus tanker’s delivery to the US Air Force will probably be delayed until late (meaning October– December) 2018. On March 6, the Air Force cited “known risks and predicted impacts associated with airworthiness certifications and slower-than-expected flight test execution”. Boeing’s contractually required delivery of a set of required assets available (RAA) consisting of 18 KC-46As plus nine sets of underwing refuelling pods and two spare engines had been rescheduled (minus the pods) for October 2017. It now appears likely to be delayed until spring (April to June) 2019, which would make the RAA 22 months later than its original due date. These delays are also likely to affect the KC-46A’s transition to full rate production, a decision that had been scheduled for May 2020.

The Air Force is unhappy with Boeing. On March 21, Secretary of the Air Force Heather Wilson told the House Armed Services Committee (HASC): “Boeing has been overly optimistic on all of their schedule …They are much more focused on their commercial activity than they are in getting this right for the Air Force and getting these airplanes to the Air Force.”

The next week, Undersecretary of the Air Force Matthew Donovan went to Seattle to convey this unhappiness directly to Boeing management. While there, he said: “While Boeing has built a superb capability in the KC-46A, we need them to double down on providing the necessary resources and engineering talent to push the last ten yards and get this programme over the goal line.”

In response, Boeing has publicly characterised the Air Force’s anticipation of further delays as a “worst case scenario”, although it has not yet, as of March 30, provided the Air Force with an alternative delivery date. This was anticipated to be provided at a high-level meeting between Boeing and the Air Force in Washington in April. On March 30, Secretary Wilson said there would be “negotiation with a partner that has an obligation to deliver some airplanes. I think they will focus on the schedule. We do not have a [revised delivery] date.” 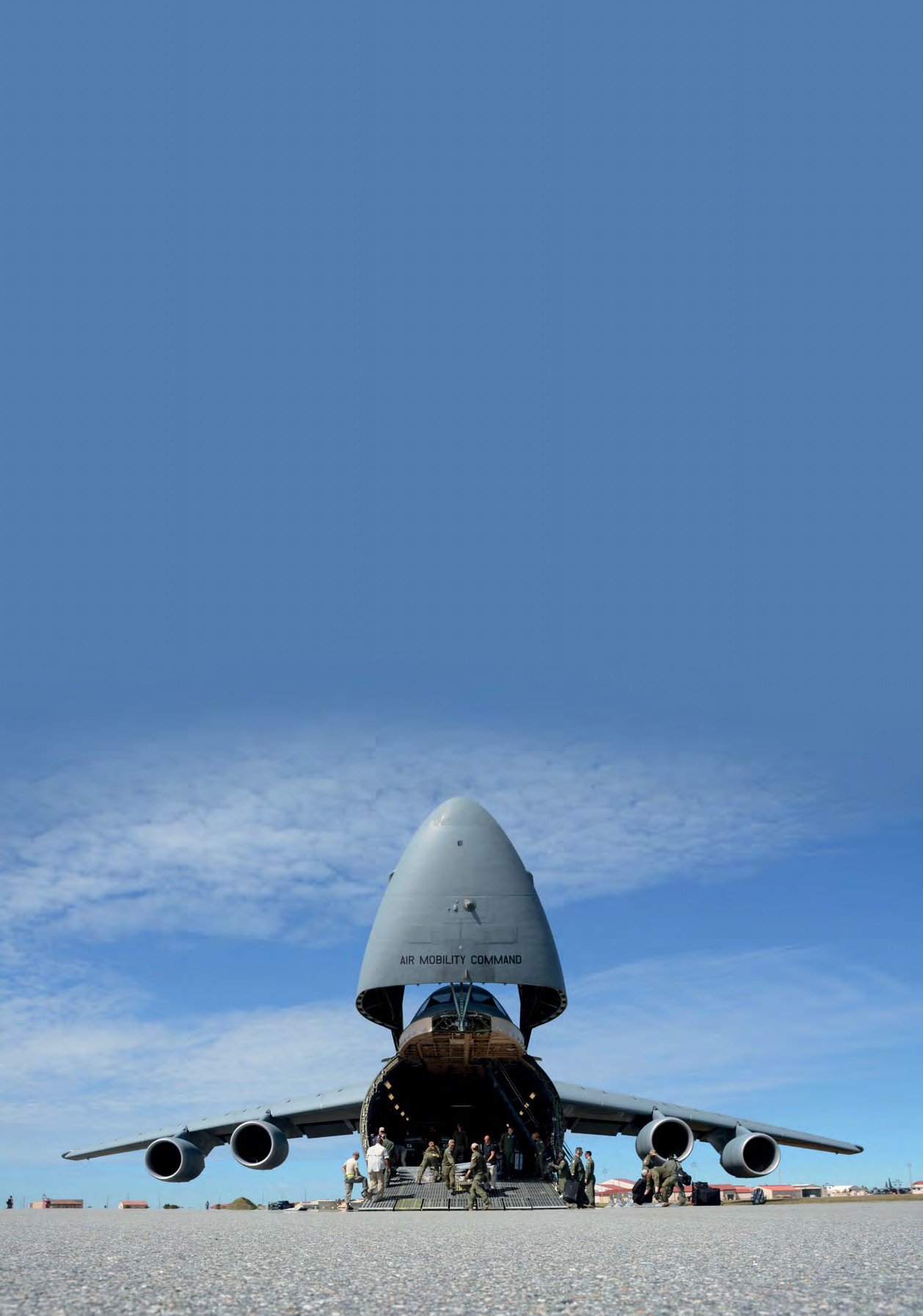 Loadmasters and airmen unload a C-5M Super Galaxy at Patrick Air Force Base, Florida. The last of 52 C-5M aircraft was delivered to the US Air Force in April 2018.
Airman 1st Class Hanna Smith/US Air Force

Boeing has reorganised management of the KC-46A programme. It announced on March 30 that it was creating a new Seattle-based division, Commercial Derivative Aircraft that will be responsible for the KC-46A, along with the P-8A Poseidon and the Presidential Aircraft Recapitalization programme.

Two of the three Category I deficiencies – the most serious type, requiring an immediate fix before the aircraft can be delivered – that were previously identified as preventing KC-46A delivery have been downgraded to Category II. These can be resolved after the aircraft is in service. Preventing the KC-46A’s high frequency radio from operating during refuelling will be addressed by a long-term, post-delivery software fix. The problem of uncommanded boom extension when disconnecting from a receiver aircraft is now considered a Category II deficiency, too, and will also be addressed by upgraded software.

One Category I issue identified in 2017 remained uncorrected: the tendency of the KC-46A’s refuelling boom to scrape the skin of receiving aircraft when disconnecting. No stealth aircraft has yet to be tested refuelling from a KC-46A. A surface scrape on a high-technology low-observable skin could both reduce its operational effectiveness and require expensive repairs. Flight-testing in 2017–2018 identified two additional KC-46A Category I deficiencies. Boeing was notified of these in March, bringing the total back up to three. The Rockwell Collins remote vision system (RVS) provides the boom operator sitting on the flight deck (unlike older tankers) with a threedimensional, real-time picture to guide refuelling.

Problems with the RVS were identified in 2017. Its performance was examined as a potential contribution to the boom scrape Category I deficiency. The RVS design, frozen in 2012, has been deemed not to represent state-of-theart technology. On completion of a review of RVS testing data, ending in March, the Air Force determined it did not meet requirements and its shortfalls amounted to a Category I deficiency. Boeing is implementing an interim fix. New software is scheduled to begin flight-testing. If it works, this problem could be downgraded to Category II.

The second new Category I deficiency has resulted from uncommanded disconnects from the KC-46A’s Cobham FR-600-84MDR Centerline Drogue System. Flight-testing is being undertaken to identify the scope of the problem and potential solutions.

William Roper, Assistant Secretary of the Air Force for Acquisition, told the HASC on March 14 that he was less concerned with the problems than with the time it was taking to cure them: “What concerns me is the speed with which issues need to be retired. Requirements have not changed: 738 requirements have to be met. Some of the choices are not meeting the requirements.”

The US Federal Aviation Administration (FAA) granted Boeing the amended type certificate for the KC-46A – required before delivery to the Air Force – in late December 2017. However, deliveries cannot start until the FAA issues its Supplemental Type Certificate, covering design changes between the KC-46A and the original 767-2C freighters. Roper said: “Delays in certification are a concern to me. We are incurring costs because of their failure to deliver.”

Delays will not directly increase the cost of the programme to the Air Force, as the $4.9 billion fixed-price contract makes Boeing responsible for any cost overruns. Boeing is now likely to be liable for additional penalties, all in addition to an estimated $2.9 billion in before-tax costs already incurred. Roper said: “[The Air Force is] spending a lot of time on the KC-46. Even though it is a fixed-price contract and the delays are not something we are paying for, it is still taking time away from warfighters.”

Despite the delays in KC-46A delivery, Boeing is continuing to build. There were 34 KC-46A airframes in the pipeline as of March. The Air Force is keeping to its original timetable for building infrastructure – including new hangars – for the KC-46A. The KC-46A schoolhouse at Altus Air Force Base, Oklahoma, has started using simulators for training.

In January 2018, the Air Force announced that 24 active-duty KC-46As each would operate from McGuire Air Force Base, New Jersey and Travis Air Force Base, California, replacing McDonnell Douglas KC-10 Extenders. The Air Force is anxious to retire the KC-10, starting in FY2019 and largely implemented over the following five years. Further delays to the KC-46A may keep the KC-10 in service longer. Roper said he “expects to slow down KC-10 retirement plans”. 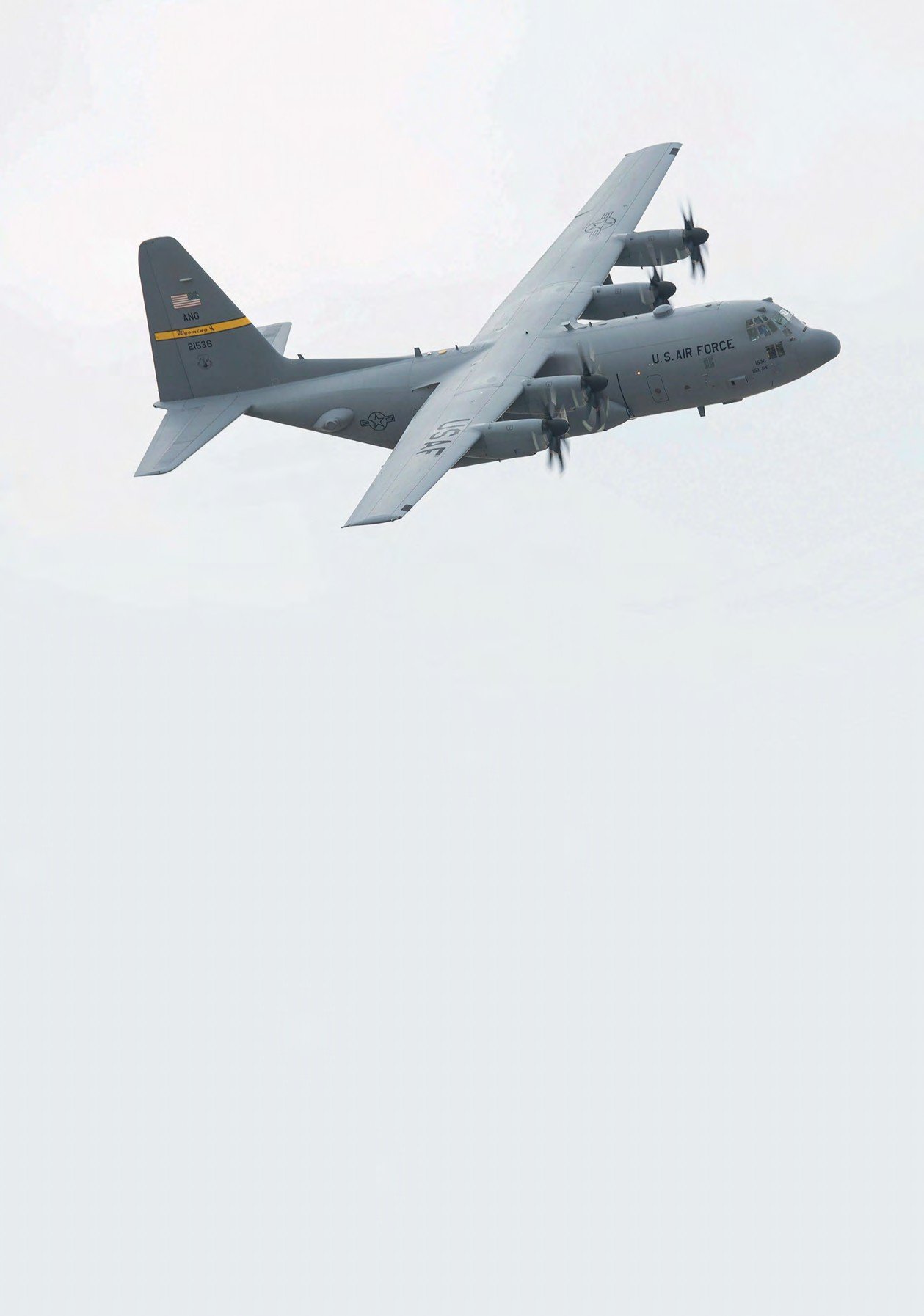 However, the most recent stumbles are unlikely to affect the overall course of the KC- 46A programme. When the Congress finally passed the omnibus FY2018 appropriation, signed into law in March, it added $510 million to increase the number included in low-rate initial production (LRIP) Lot 4 to 18 KC-46As from the 15 originally requested.

Wilson was pleased at the extra three aircraft. Speaking in Washington on March 30, she said: “I talked to Boeing this morning to see if we can get them.” LRIP Lot 5, with a further 15 KC-46As, was included in the FY2019 budget request; a contract is planned to be issued in January 2019.

Overall, KC-46As numbers are unlikely to be affected by the delay. The 179 KC-46As in the programme of record are still on track to be delivered by 2028, when the Air Force will operate them along with 300 Boeing KC- 135Rs as its tanker force. Speaking to the HASC on March 14, Air Force Deputy Chief of Staff for Strategic Plans and Programs Lieutenant General Jerry Harris said: “We are comfortable with the risk level of having 479 tankers, KC-46s and KC-135s.”

The budget request included $109 million in research, development testing and evaluation for a four-pronged upgrade package. The most urgent part of the programme is to replace C-130H centre wing boxes approaching the end of their service lives. It will be followed by C-130 Avionics Modernization Plan (AMP) increment one, which will provide the global air traffic management compliance required by 2020, with Automatic Dependent Surveillance Broadcast-Out and Mode S transponders. While this increment started flight-testing in 2017, many aircraft will be late in receiving the upgrade.

Lieutenant General Mark Nowland, Deputy Chief of Staff for Operations, Headquarters US Air Force, before the HASC on March 14 said: “Working out an accommodation between ourselves and the FAA, large aircraft will comply to the maximum amount possible”, with the international standards. AMP increment two will install glass-digital cockpit instrumentation and is planned for the 2028 timeframe.

Lieutenant General Nowland said the fourth prong is to “potentially upgrade engines and propulsion, options out there and not yet funded”.

Speaking at an Association of the US Army forum in Washington DC on March 12, General Joseph Lengyel, Chief of the National Guard Bureau, said he thought funding the upgrades would be a good idea: “In the longer term, it is a less expensive option to upgrade engines and propulsion systems rather than buy new C-130Js …you must modernise the force concurrently; you cannot modernise the active-duty force then modify the reserve component.”

Congress, which has been a strong supporter of the Air National Guard, added $144 million to the FY2018 omnibus appropriation to enable C-130H re-engining and avionics upgrading.

April 2018 saw delivery of the last of 52 Lockheed C-5M Super Galaxy transports, aircraft that have gone through the Reliability Enhancement and Re-engining Program, a programme designed to enable the aircraft to remain operational until 2040. However, the April delivery does not mark the end of C-5M upgrading. The FY2019 budget request includes $80.6 million in procurement funds, predominately for upgrading the core mission computer and weather radar system equipment.

The budget request includes funding to bring into operation a second two (of a current total of eight) of the 52 C-5Ms currently in the backup air inventory – essentially being parked on the flight line of their base – to primary air inventory, flying missions on a regular basis. This is a follow-up to last year’s request for two backup C-5Ms to start regular operations. General Harris said: “We pulled two out this year. If we pull two out next year, it effectively puts an additional squadron out there.”

On March 15, a C-5M suffered a nose landing gear malfunction causing it to land on its nose at Lackland Air Force Base Texas. The C-5M had already experienced landing gear problems earlier this year, which led to fleet-wide inspections and modifications, as well as restrictions on using the landing gear’s kneeling capability.