POWER by the HOUR

Need to minimise costs more than ever? Could a pay-as-you-go ground power subscription be right for you? Tom Allett reports

As the commercial aviation industry begins to take the first steps towards recovery, it seems likely that future environmental regulations will be more demanding than ever. Some governments are already considering imposing stricter environmental obligations on their country’s airlines in and airports in  return for any support they may  offer. Ultimately, whatever the future looks like, you can be sure that the pressure on the industry – landside and airside – will only increase.

You simply place it, connect it and there you go

Indrek Nõlvak  AS Tallinn Airport board

Airports are striving to make their operations carbon-neutral and, despite the numerous ‘green’ measures being introduced across their respective facilities, the ‘zero emissions’ goal can only truly be achieved by the widespread introduction of electrical power wherever possible. The industry trend towards gradually replacing existing diesel ground power units (GPUs) with eGPUs, thereby reducing companies’ environmental ‘footprints’, was already evident before the current pandemic, and the arrival of the electric units was a pleasant surprise to many of their operators.

I well remember a visit to Frankfurt Airport, where a representative of the airport’s ground handling company recalled a ‘win-win’ example of what the eGPUs could deliver. Soon after the first electric power units arrived, an experienced member of the ramp team reported an eGPU as being unserviceable. It fact, there was nothing wrong with it, but because he was used to working with diesel equipment that, by comparison, made a lot of noise and poured out exhaust fumes, the quiet emissionfree eGPU appeared to be broken. At Frankfurt, the result of introducing the eGPU, was a cleaner airside operation, lower running costs and happier staff who now worked in a quieter environment with better air quality.

Costs Although the environmental advantages of eGPUs are not in doubt, new, high quality eGPUs are currently more expensive to purchase than their diesel counterparts. However, over time, their lower running costs mean that the owner/operator will get a better return on their investment. It is now possible to remove the initial investment costs too, as ground handling companies look towards business models that allow them to only pay for equipment when they use it.

Provided by ITW GSE and marketed as Power by the Hour (PBTH), this pay-asyou-go system is being used by the AS Tallinn Airport ground handling company at Estonia’s primary international gateway, Lennart Meri Tallinn Airport (IATA: TLL). ITW has provided the handling agent with mobile eGPUs and a per-hour billing system as part of a subscription plan that is designed to meet the company’s business model and ensures 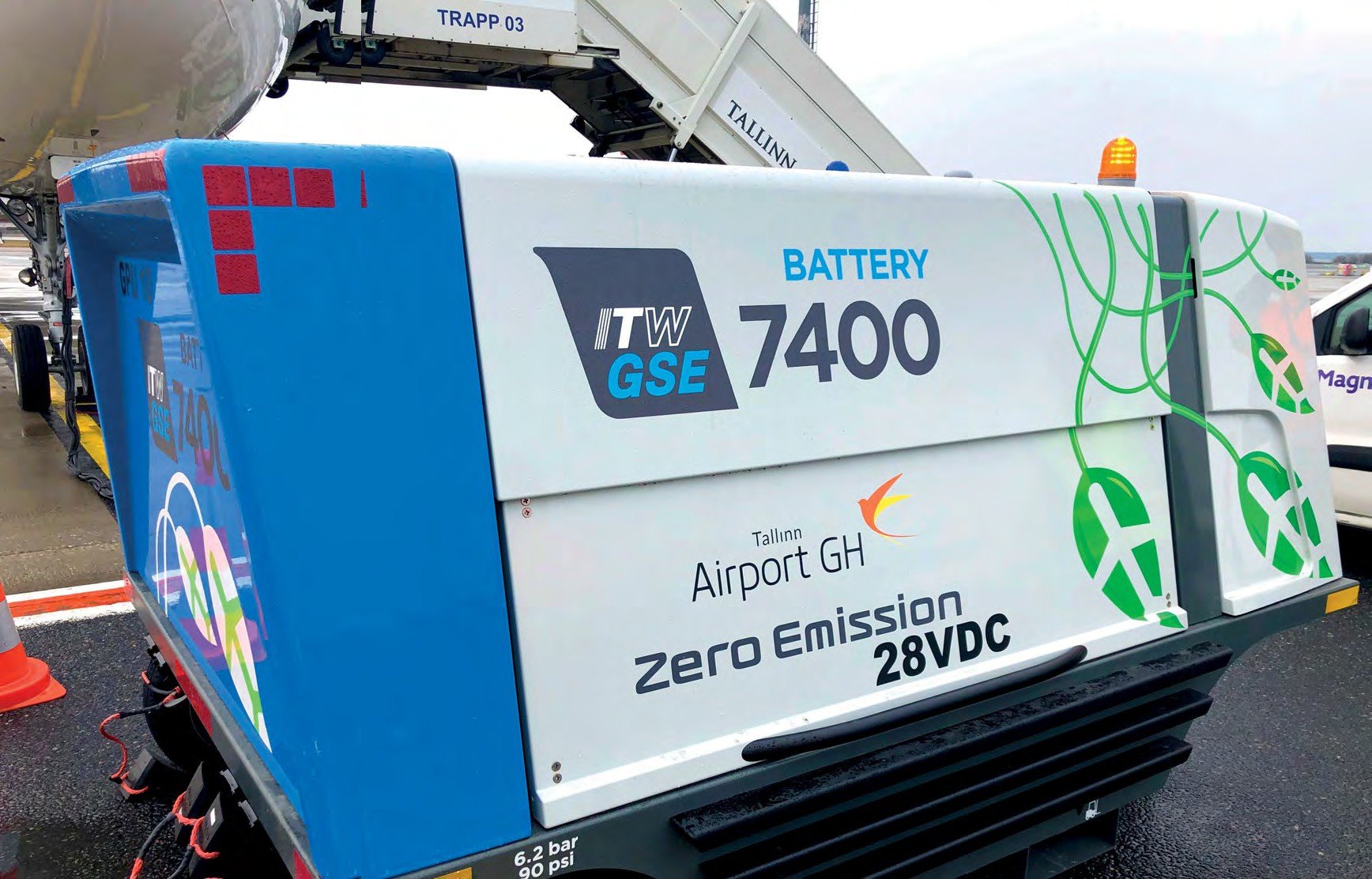 Given the uncertainties facing ground handling companies, is paying for ground power on an hourly basis the way forward?
ITW

that they only pay for what they need. Both the number of eGPUs and their hours of use can be changed at short notice. These plans are flexible and fully scalable, depending on the units used and the number of hours anticipated per month. This can range from 90 to 210 hours per month or unlimited usage. If the operator exceeds its agreed hours of usage in a year, extra hours are simply charged on a flat-rate basis; there is no penalty charge for exceeding the planned hours. Tallinn is using the ITW GSE 7400 eGPU, which is powered by up to four fourthgeneration Nissan Leaf battery packs. Its output is controlled by ITW’s own 2400 solid-state converter. “You simply place it, connect it and there you go,” enthused Indrek Nõlvak, a board member of the AS Tallinn Airport company.

Crunching the numbers While there is no doubt that the environmental footprint of a diesel GPU is much higher than that of its electric competitors, what do the calculations tell us? When it comes to crunching the numbers, ITW GSE said that by replacing just one diesel GPU, the operator will cut CO2 emissions by 90% and nitrogen oxides (NOx) by 95%, which equates to 190,000lb (86,000kg) of CO2 every year. It estimates that there are approximately 4,000 diesel GPUs running every day in Europe alone and that replacing just a quarter of them with electric units corresponds to removing the emissions from 48,000 cars annually. The company calculates that a diesel GPU is typically run for an average of eight hours a day. With its engine constantly working at high speeds to generate the

400Hz necessary to power an aircraft, it would likely burn over 10,550imp gal (40,000lit) of diesel a year. There is also the high workload inflicted upon a diesel GPU to consider as the maintenance and repair costs of keeping them serviceable can be significant. Using that data, it calculates overhaul costs to be two-thirds of those required to keep a diesel GPU operational and says the diesel unit’s higher operating expenditures (OPEX) mean you can replace all your old equipment with eGPUs on a PBTH plan and still save money. Its figures are based on an example whereby a customer leases a diesel GPU on a six hours per day basis. It calculates that the associated OPEX will be US$65,000 a year, compared to approximately US$48,000 per year for an eGPU on a Power by the Hour subscription. Six hours per day is, perhaps, a modest average daily use figure, but even that means the eGPU subscription plan could deliver OPEX savings of more than US$50,000 per unit over three years. Plus, the more hours the eGPUs run, the more the operator saves. Of course, airline services are routinely launched, altered and discontinued all the time. New business opportunities arise while others disappear and the current coronavirus crisis has made the short-to medium-term requirements incredibly difficult to predict. Flexibility is surely key to coping with today’s situation and future growth. Given the industry circumstances, perhaps PBTH, offering the ability to scale up and down as required, is the sensible business model for ground handlers wanting to save money while improving their environmental credentials. ai