A NEW all-time altitude record for an unpowered aircraft was set by the Airbus Perlan 2 in early September. High above Argentina, the aircraft (N901EE) and its pilots Jim Payne and Tim Gardner soared to an altitude of 76,124ft.

The glider is operated by the Airbus-backed Perlan Project, a research initiative designed to study aerodynamics, flight safety, weather and atmospheric conditions at extremely high altitudes.

These altitudes meant Perlan 2 passed the Armstrong Line, the point in the atmosphere, around 59,000–62,000ft above sea level, where an unprotected human’s blood will boil if an aircraft loses pressurisation.

The Perlan 2 still has some way to go to beat the overall altitude record for level flight by a manned aircraft, which is 85,069ft, a record held by the SR-71 since the 1970s. However, with Perlan 2 designed to fly up to 90,000ft (conditions permitting) it is plausible the Blackbird’s long-held record will fall to the humble glider.

The Perlan 2 has been produced by the Perlan Project, a cooperative venture between Airbus and an all-volunteer team of engineers and pilots from around the world. The aircraft has 84ftlong (25m) wings and weighs just 1,500lb (680kg), less than a 1967 VW Beetle. It soars to high altitude by riding air currents called stratospheric mountain waves that rise high into the atmosphere above major mountain ranges.

The location for the successful flight was El Calafate in Argentina. This remote area of Patagonia, also used in earlier flying by the Perlan 2, is an ideal operating environment for the aircraft: the mountain waves there are strengthened by the Polar Vortex from the South Pole, a phenomenon that occurs for only a brief period each year.

Flying a glider, albeit a very specialist purpose-built one, in such an extreme environment that has been largely the preserve of jets such as the SR-71 and U-2, is obviously a major technical achievement. Flying around 14 miles (22km) above the Earth’s surface, the aircraft has been pointdesigned to enable it to operate in the thin high-altitude air; its wide, high-aspect ratio wings and 262ft2 (24m2) wing area are designed to maximise efficiency.

The capsule in which the pilots sit is made from carbon fibre and has a cabin atmosphere equivalent to around 14,000ft. The onboard pressurisation system is designed to maximise efficiency by eliminating the need for powerhungry compressors.

Perlan 2 also has a closedloop rebreather system, in which the only oxygen used is what the crew metabolises. There is a wave visualisation system, which graphically displays areas of rising and sinking air thermals on the cockpit displays as the aircraft climbs.

The rebreather system is supplied by BioMarine Rebreathers; the extensive list of sponsors and equipment and service providers on the project also includes United Technologies, Weather Extreme Ltd, Garmin, Intel and TRIG Avionics.

Airbus Chief Executive officer Tom Enders said: “By exploring an underexplored part of the atmosphere, Perlan is teaching us about effcient high-altitude flight, about detecting natural sources of lift and avoiding turbulence, and even about the viability of wingborne exploration of Mars.”

Airbus describes the rebreather system as “the lightest and most efficient system for a sealed cabin” and says, “its design has applications for other high-altitude aircraft”. The wave visualisation system, meanwhile, could have an application for commercial flights, the company said: “Following lines of rising air would allow faster climbs and save fuel, while also helping aircraft avoid dangerous phenomena such as wind shear and severe downdrafts.”

Airbus says Perlan 2 does not affect the temperature or chemistry of the surrounding air, “making it an ideal platform to study the atmosphere”. On every flight, the aircraft’s instrument bay carries experiments developed by the project’s science and research partners; recent flights have taken up instruments measuring radiation effects and space weather.

Some research projects are collaborations with academic organisations and schools in the United States and Argentina, in line with the Perlan Project team’s plans to provide education and inspiration for young people seeking careers in engineering and science.

The project has grand plans. Its next objective is to fly Perlan 2 up to 90,000ft to explore how mountain waves affect the Earth’s atmosphere and climate. This will require engineering a pressurised craft with wings that can fly in less than 3% of normal air density and at temperatures of -70oC (-94oF).

A subsequent research phase intends to fly the aircraft even higher, up to 100,000ft, an environment for which the glider will need new transonic wings. Flight operations at this altitude will also explore the Polar Vortex in the northern hemisphere. Mark Broadbent 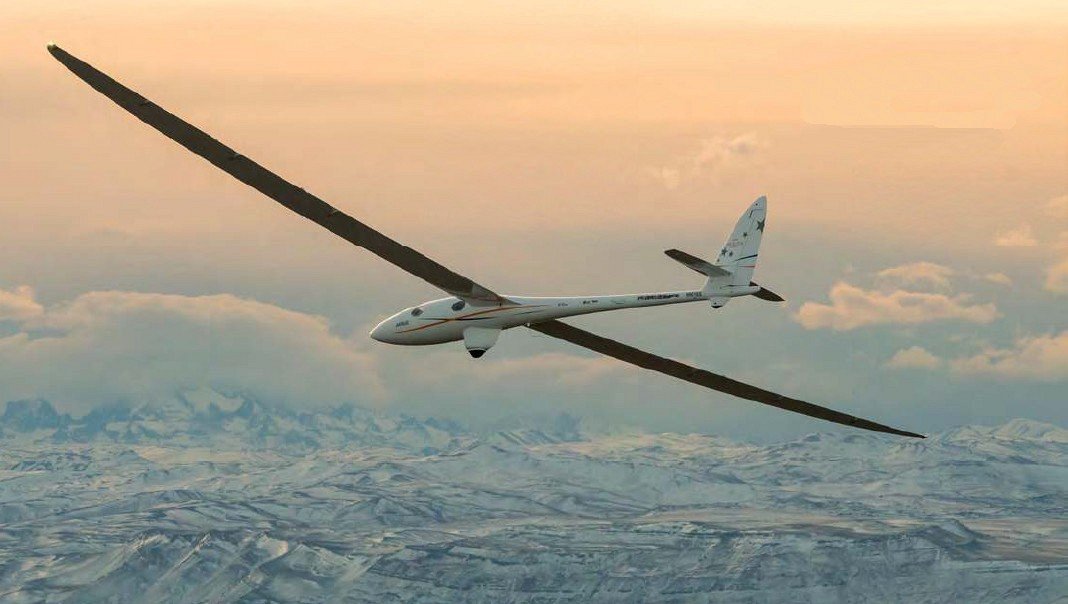 The Airbus Perlan 2 during its September 2, 2018 flight when it flew above 75,000ft, setting a new all-time altitude record for an engineless aircraft. Airbus