Return of the Wobblin’ Goblin

THEY NEVER really went away. The Lockheed Martin F-117 Nighthawk stealth fighters were sleeping, in the hangars they had occupied in the early years of their operational career, at Tonopah Test Range Air Base, Nevada, near Groom Lake (the Area 51 beloved by films and television). The black jet – its skin is radar-absorbent material – went by many nicknames.

As it was unstable in flight – it could only be flown because of computerised flight stabilisation – it became known as the Wobblin’ Goblin, the latter being the name of an earlier stealth design that was never produced.

Congress had insisted on the preservation of the US Air Force F-117 fleet when it was withdrawn from active service in 2008. The National Defense Authorization Act of 2017 authorised the fleet to be demilitarised at a rate of four per year. Since then, there was no indication that F-117s were to be scrapped; indeed, the one pre-production aircraft that was scrapped showed the process to be an expensive and difficult one, an environmental nightmare.

With its first-generation stealth technology still classified – the F-117 aircraft preserved at the Air Force Museum at Wright Patterson Air Force Base is a test aircraft built with standard materials – the aircraft could not be hauled off to the boneyard at Davis-Monthan Air Force Base near Tucson, Arizona. The Air Force might quietly truck them away, pry off their golddusted radar-reflective canopies, and bury them in the desert at night, despite fears that material contained in the low-observable coatings might seep into the ground water. Beauty is skin deep, but stealth is bad to the bone.

Since 2010, there have been multiple credible sightings and reports of single and two-ship F-117 flights, mainly operating in and around Nellis Air Force Base and Tonopah and, once, even refuelling from a KC- 10A tanker. A fatal crash of an unidentified US Air Force aircraft near Groom Lake, on September 5, 2017, may have been an F-117. The most recent F-117 photographs were taken in Panamint Valley, California. Back in combat?

Yet it was a surprise when, in February, the well-respected Dutch aviation magazine Scramble reported on its website that in 2017 four F-117s had flown combat missions over Syria and Iraq during Operation Inherent Resolve. The aircraft were reportedly based at an undisclosed location in the Central Command area of responsibility. This usually means Al Udeid Air Base, Qatar, but could also be a base in Saudi Arabia, the United Arab Emirates or Kuwait. The report stated during this deployment at least one was forced to make an emergency landing while flying a mission.

Was this the F-117’s last combat deployment? Maybe, but is not surprising that the events were not publically disclosed; in the past two years, the Department of Defense has cut back its release of information, especially about combat operations.

The question remains: why were F-117s sent back into combat? The Air Force had already flown a stealth fighter over Syria; the F-22 Raptor is laced with stealth technology of a more advanced nature than that used on the F-117. It has reportedly performed up to expectations. F-22 combat sorties have doubtlessly been studied by as many sensors as the Russians could forward deploy to their bases in Syria.

Whatever F-117s were tasked to do over Syria, it was likely something that F-22s either cannot do or do not want to do with the Russians watching. The F-117 was designed to carry internally the 2,000lb EGBU-27 GPS/laser-guided hard and deeply buried target defeat (HDBTD) munition, a GBU-24 modified specifically for the F-117. 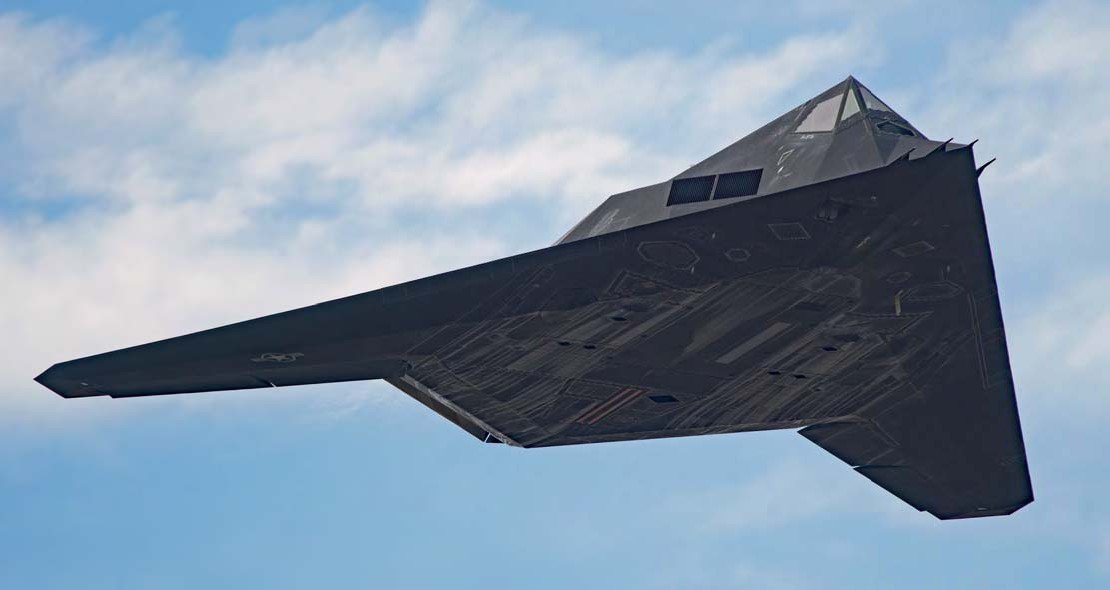 During its operational service life with the active-duty Air Force, the F-117 Knighthawk was rarely seen at 200ft AGL, let alone caught on camera. 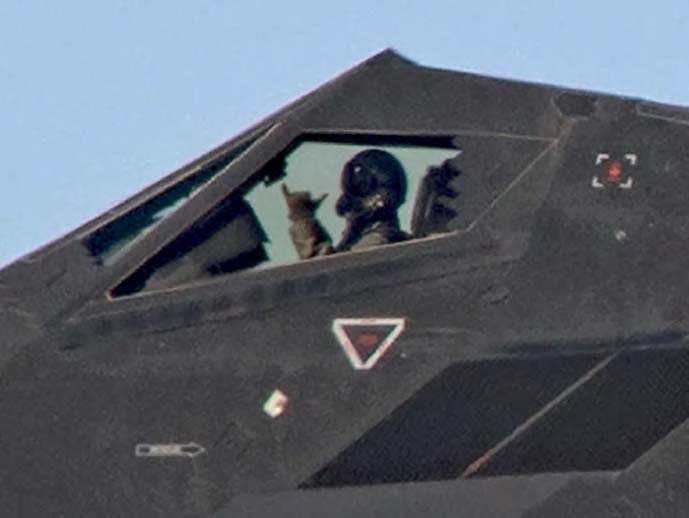 The pilot of F-117 84-0824 made at least two passes giving the ‘shaka’ gesture at the AIR International photographer.
All images Dan Stijovich 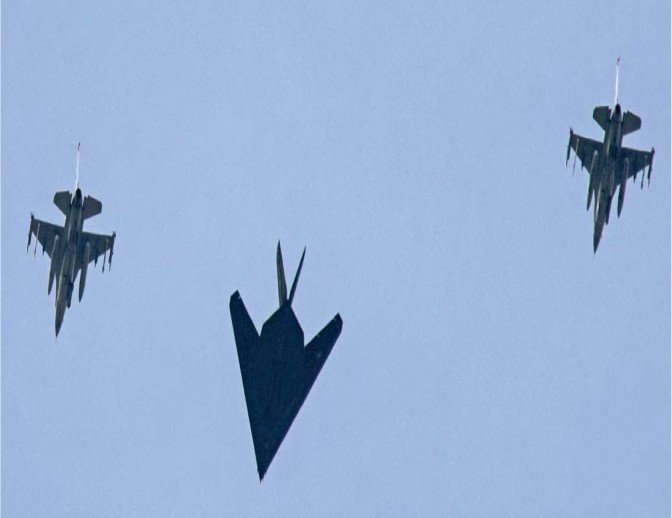 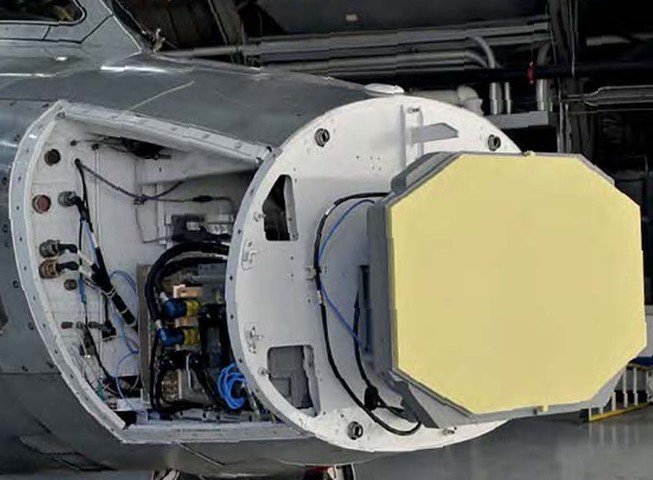 Another F-117 armament option was the special purpose BLU-114/B sub-munition packed with large numbers of carbon graphite filaments. A number of sub-munitions contained within the bomb casing are dispensed over the intended target to produce non-lethal effects, shorting out electrical power distribution equipment with their filament payloads.

The F-22 Raptor, a specialist air dominance fighter, was designed to carry nothing internally larger than a 1,000lb bomb.

While the Scramble report stated the F-117s delivered GBU-39/B Small Diameter Bombs (a munition that had not been integrated on the F-117 at the time the type left active service), accurate and stealthy delivery of munitions, probably for HDBTD effects, is the most likely purpose behind an F-117 deployment. Whether they actually dropped weapons remains uncertain.

Maybe it was enough for the evil people that live in bunkers to know they were at risk of immediate and painful death and realised they needed to go elsewhere to remain alive. When evil people leave their bunkers, they cannot bring along the secure landline communications they so rely on, just one way they become more vulnerable to a range of intelligence sources.

Another way to make them vulnerable is to short-out their existing communications by using BLU-114s, and then to intercept and monitor them as they subsequently come up on their backup circuits.

Why are some F-117s flying in the United States? Asking the Air Force does not help. The service stopped talking about the F-117 when it went out of service, except to say that the aircraft were being kept in Type 1000 flyable storage to meet the congressional requirement and that they were occasionally flown. It was estimated that about six were usually held in flight status, flown by Air Force and contractor (retired F-117) pilots.

There are many more potential uses for a small residual Nevadabased F-117 force. The most likely is supporting training and research and development efforts, developing counter-stealth tactics and sensors and seeing how these work.

The sighting of an F-117 flying north-to-south and south-to-north runs at 200ft through California’s Panamint valley on February 26 and 27, with two F-16C fighters assigned to the Air National Guard Air Force Reserve Command Test Center (AATC) makes more sense as a testing or tactical scenario than training for an operational mission profile. At the height of its operational utility in the 1990s, the F-117 bombed straight and level from high altitude. 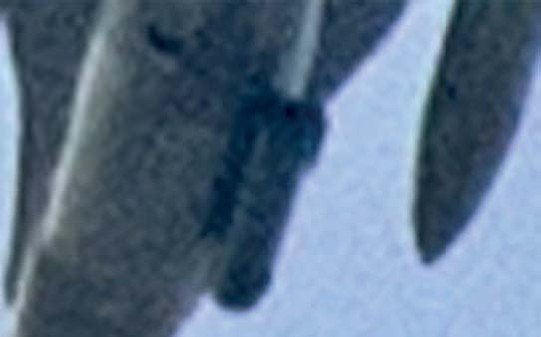 This highly-cropped frame shows what looks to be a Lockheed Martin Legion pod fitted to one of the F-16s seen over the Panamint Valley. 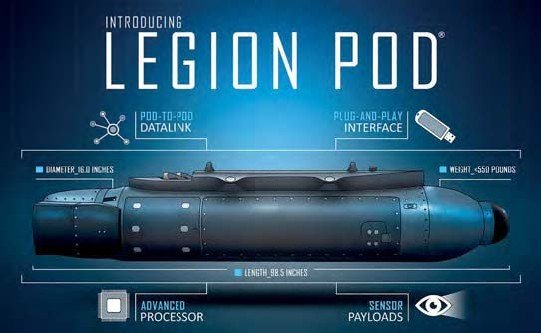 On the morning of February 26, an F-117, callsign LEHI 1, checked in with the low-level control agency for the area around Panamint Valley, the pilot advising his intent to work at 200ft above ground level in the valley before departing to the north, presumably returning to Tonopah. That afternoon, F-117 serial number 84-0824, callsign LEHI 1 checked in with the control agency followed by two F-16Cs, callsign SHARK 1 and 2. High winds were blowing through Panamint from the south creating a resultant dust storm in effect. The F-117 pilot told the F-16 pilots of his concern caused by the amount of trash and hash at his altitude, and that it might curtail their ops.

The F-117 made two southbound runs before climbing to about 10,000ft and formed up with the two F-16s; one on either wing heading north. The F-16s returned to Edwards Air Force Base to the southwest, and the F-117 departed the area to the north, presumably to Tonopah.

On the morning of February 27, at approximately the same time Level at 200ft above the valley floor, LEHI 1 makes one of multiple runs in Panamint Valley. as the previous morning, an F-117 callsign LEHI 1 checked in with the control agency to the north, and two F-16s also checked in at a position 20 miles southeast of Naval Air Weapons Station China Lake; a point to the southwest of the valley.

Over a 40-minute period, the F-117 made multiple runs at 200ft above the valley floor, firstly flying from the north to the south and returning south to north, each one on a different track along the valley.

It is plausible that this operation involved the F-117 simulating a stealthy air threat to test either the low-level detection capability of the F-16’s radar or another on board sensor or to help develop tactics to detect such a threat.

At least one of the F-16s was fitted with a Legion Pod; a multi-function sensor system that includes the ASG- 34 long-wave infrared sensor and a processor capable of high-fidelity detection and tracking of airborne targets seeking heat generated by the target aircraft’s engine and aerodynamic heating of the airframe generated during flight. According to manufacturer Lockheed Martin, the Legion pod supports collaborative targeting operations in radar-denied environments.

Given the F-16s were aircraft assigned to the AATC, it’s equally plausible that a radar system was under evaluation, perhaps the new Northrop Grumman APG-83 Scalable Agile Beam Radar, an active electronically scanned array system ordered by the US Air Force in May 2017. Northrop Grumman was awarded a $243.8 million contract for 72 APG-83 units to upgrade 72 US Air National Guard F-16s to meet a US Northern Command Joint Emergent Operational Need for homeland defence. There have been classified cruise missile defence sensor programmes in the black world since the 1980s, and the F-16s may have been testing something from this source.

In Syria and California, however, F-117s could also be flying to provide cover for black-world classified programmes that have not yet emerged. Letting air traffic control in the US or Russian radar operators in Syria assume a problematic radar or sensor return from an F-117 may help keep the identity of the actual source secure.

Such black-world aircraft may well be unmanned (the absence of publicly identified programmes to provide new unmanned combat air vehicle capabilities has raised suspicion) and may be operated by intelligence services rather than the Air Force. Tonopah is also home to the Lockheed Martin RQ-170 highaltitude UAV, the so-called ‘Beast of Kandahar’, which emerged from the black world when the first example was seen at Kandahar in late 2007. Basing RQ-170s and the nottotally- retired F-117s together may be a function of operational utility as well as the availability of secure facilities at Tonopah.

Level at 200ft above the valley floor, LEHI 1 makes one of multiple runs in Panamint Valley.