One of the world’s premiere destinations for travellers, Italy is also one of the European countries that’s been hardest hit by COVID-19. Matteo Legnani hears how its airports in Rome are coping with the sudden disappearance of the tourist traffic on which they depend

“We have lost almost €20m a month since March 2020. Our traffic is down 75%, with some 30,000 passengers a day instead of the usual 125,000,” said Marco Troncone, CEO of Aeroporti di Roma (AdR), which includes Fiumicino (FCO) and Ciampino (CIA) airports. “We’re asking governments and civil aviation authorities to help us contain the devastation.” Troncone accepts that hundreds of other airports around the world are tackling the same crisis. However, the failure of the Italian State to provide financial help for the country’s airports has driven him to look for other ways to remedy the situation.

In co-operation with Regione Lazio and Italian national carrier Alitalia, Fiumicino was the first airport in the world to offer COVID-tested flights. The initiative began on September 15, when two out of seven Alitalia daily flights to Milan Linate (LIN) carried passengers who had taken a molecular COVID test within 72 hours of boarding or an antigenic test at the airport 90 minutes before departure. The latter gives a result within 30 minutes, ideal for a traveller rushing to board a flight. 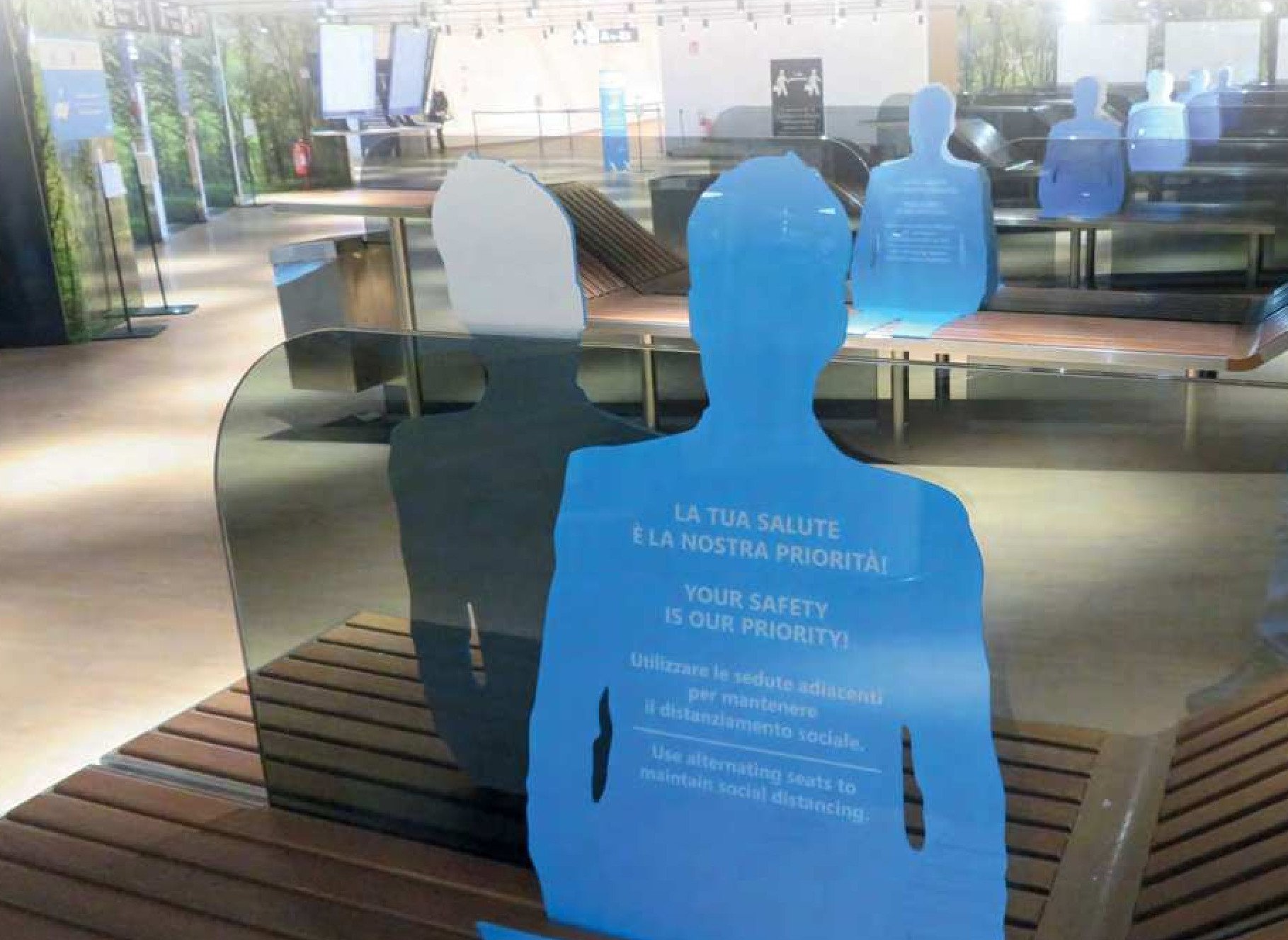 Clear, consistent signage is one of the reasons Rome Fiumicino was the first airport in the world awarded Skytrax’s fivestar rating for anti-COVID measures
All images via Matteo Legnani unless stated otherwise 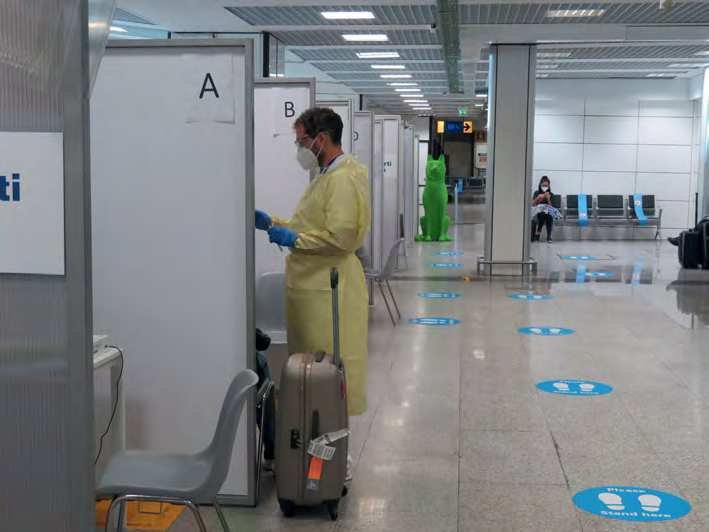 Results of the antigenic test can be available within 30 minutes, and it is hoped that the tests will soon be considered a routine part of flying

The trial rose to four flights a day from September 23. However, this was just the beginning of a more ambitious project: to introduce COVID-tested flights on long-haul routes, revitalising a market killed by the pandemic and the travel limitations subsequently issued by governments around the world.

An appeal to governments

Many countries continue to green-light travel for business purposes. Airports in financial hubs such as London and Frankfurt have weathered the crisis to a reasonable degree, with thousands of business travellers continuing to fly between Europe and North America or the Far East.

Long-haul traffic into Fiumicino, however, is made up almost exclusively of tourists, meaning that the airport has been particularly heavily hit by restrictions on travelling for pleasure.

“That’s why, if we consider long-haul traffic only, we are down 96%” explained Troncone. “Obviously, we are not suggesting that we can get back to our normal volumes of intercontinental traffic. Only the discovery of a vaccine would enable that. If we could increase current traffic from 4% to 20-30% of our customary levels, we would be more than happy. But to do that, we need the co-operation of governments and the help of authorities governing civil aviation in Europe and worldwide to ease or lift travel restrictions for COVID-free flights, where passengers do not represent a risk to destination countries.”

According to Troncone, Lufthansa and Delta are among the airlines interested in starting COVID-tested flights from FCO. The aim is to grow a network of airports and airlines which could lobby more powerfully for a revision to existing travel bans. The situation needs to change quickly, though – ideally by February or March 2021, when people are likely to begin making plans for the summer. 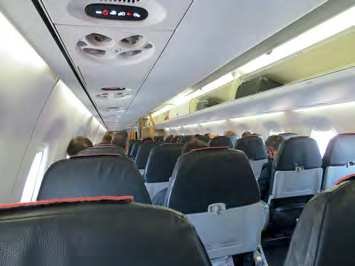 Alitalia’s Milan-Rome route, one of its busiest, was chosen for the COVID test project, beginning with two flights a day 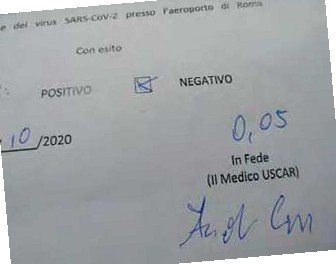 Passengers with negative COVID test results are free to board, while those who test positive must liaise with the Italian national health service

Technology will be a key factor. Nose swab tests are increasingly cheap, and the introduction of saliva tests will make the procedure even cheaper. “And when I say cheap, I mean just a few Euros per test” said Troncone. “If things proceed the way we hope regarding COVID-tested flights, we can imagine a not so distant future when undergoing a COVID test before a flight will seem normal. Its cost will be included in the price of the ticket, as is the case with airport fees, fuel surcharges and so on”.

Rome’s initiative is not unique. In November, United Airlines and Lufthansa launched trials, offering quick-result COVID tests for passengers travelling between Newark and London Heathrow and Munich and Hamburg, respectively. 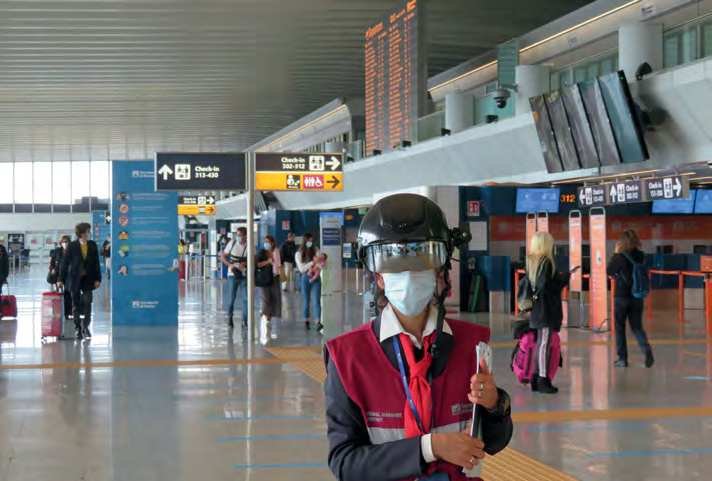 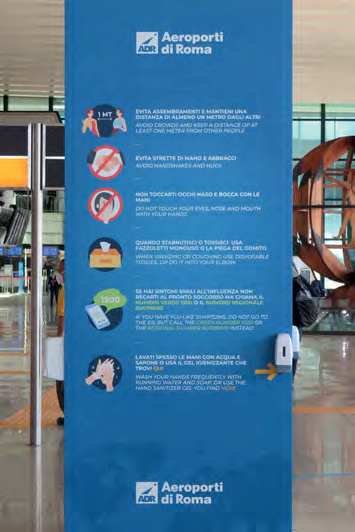 Totems throughout the terminals at Rome’s airports remind passengers of the best ways to stay safe in transit, from hand washing to social distancing 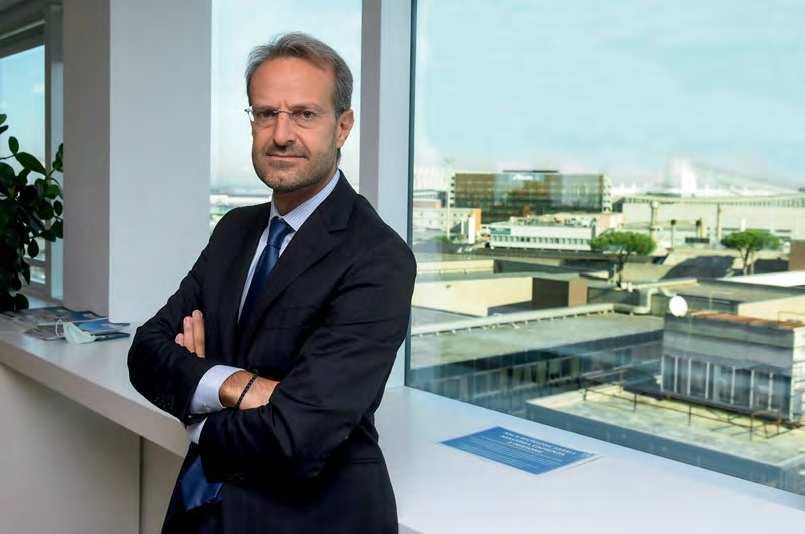 AdR has worked hard to create a safe and healthy environment for travellers. Its effort has been recognised by both the Airport Council International (ACI) and Skytrax. Fiumicino has won ACI’s Airport Health Accreditation, while, according to Skytrax, it was the first airport in the world to receive a five-star rating for its anti-COVID safety measures and procedures.

Airports International experienced these measures firsthand in October. Our trip from Milan to Rome began at 8.30am in the departure hall at Milan Linate Airport (LIN), with an antigenic, rapid-outcome COVID test carried out on all passengers booked onto flight AZ 2039, scheduled for departure at 10.00am. A section of departure Area 1 was dedicated to passengers on flights AZ 2039 and AZ 2061, the latter scheduled for departure at 5.00pm. Results were available some 30 minutes after the swab, enabling all COVID-negative passengers to proceed to check-in and security. Passengers who tested positive were identified to the Italian national health service and placed in isolation pending a further test. According to reports in the Italian media, only 25 passengers (out of almost 4,000) tested positive during the first month of the trial.

Since mid-March 2020, all Fiumicino passengers have travelled through Terminal 3, a facility usually dedicated to extra-Schengen and long-haul flights. As AdR’s chief operating officer, Gian Luca Littarru, explained: “We decided to concentrate activities in a single building, to be more efficient with our anti-COVID measures and procedures, while being cost-effective.” The newest part of the Fiumicino complex, T3 is ideal for social distancing during check-in, security and boarding.

“Rome Fiumicino Airport has done an excellent job in delivering COVID-19 protocols that enable a safe environment for customers and staff.” 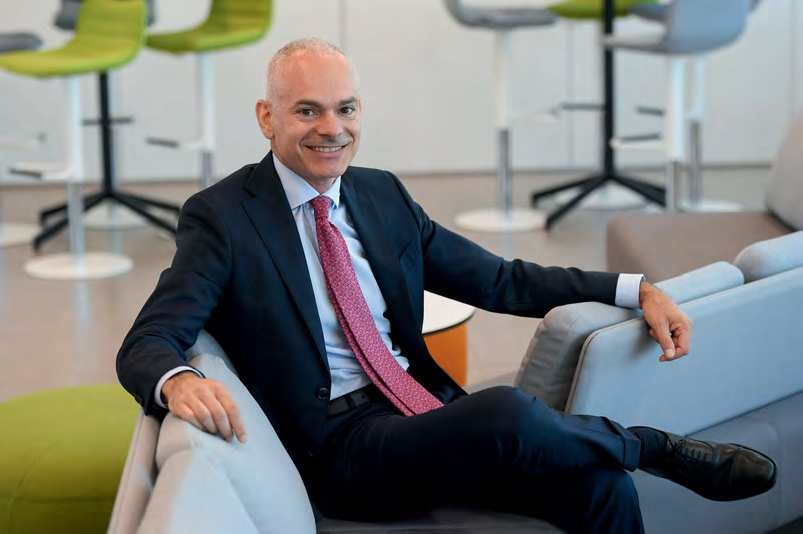 AdR’s anti-COVID strategy inside the terminal is based on three pillars: cleanliness, signage and passenger awareness. At T3, check-in desks are sanitised up to four times a day and personal effects trays at security checks up to six times a day. Baggage delivery carousels are cleaned on a daily basis, as are all hard surfaces inside the terminal. Even escalators’ handrails receive attention, with LED lamps producing UV rays which kill bacteria and viruses instantly. Some 350 sanitising gel dispensers are available in public areas.

Three hundred totems in Italian and English recommend social distancing and the mandatory use of face masks, as does a dedicated announcement every 10 minutes. Specific, intuitive signage has been adopted in high-traffic areas, all seating areas and even in the toilets, where it advises passengers not to wash their hands next to other travellers.

Skytrax observed and tested these measures in September during a threeday audit, with the consistency of standards being a key determinant in the final rating applied. Skytrax CEO Edward Plaisted noted: “Rome Fiumicino Airport has done an excellent job in delivering COVID-19 protocols that enable a safe environment for customers and staff. In the core areas of hand hygiene and social distancing, the airport has robust procedures in place and, importantly, this is reinforced by a high level of attention to terminal sanitisation at high-contact points.”

“Since January 2020, when we implemented our hygiene procedures, AdR has spent more than €10m to guarantee maximum safety inside Fiumicino and Ciampino terminals,” said Littarru. “Today we are very proud of the acknowledgements received, including the five stars from Skytrax.”

Consequently, almost all infrastructural development has halted, including the new Pier A at Terminal 1, due to host domestic and intra-Schengen flights. The €130m building was to be inaugurated in mid-2020, adding 18,000m2 and 13 contact gates to the terminal complex, but its opening is now set for an unspecified date in 2021.

Of the €360m set aside for infrastructure in 2020, only a third has been spent. The medium-to-long-term scenario has been revisited, too. Plans to construct a huge new terminal on the northern side of the airport complex have been abandoned. Fiumicino Nord was to have featured two new runways and a dual terminal with some 60 contact gates and a combined surface of 1,000,000m2 . 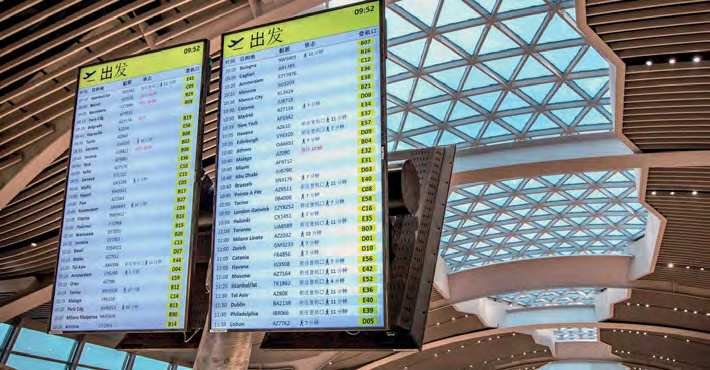 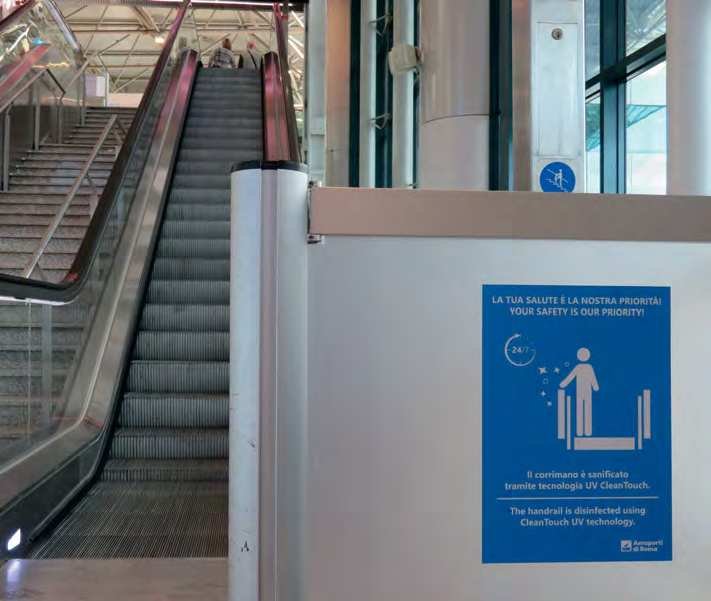 Handrails, one of the most touched surfaces at FCO, are sanitised using highly effective ultraviolet lighting 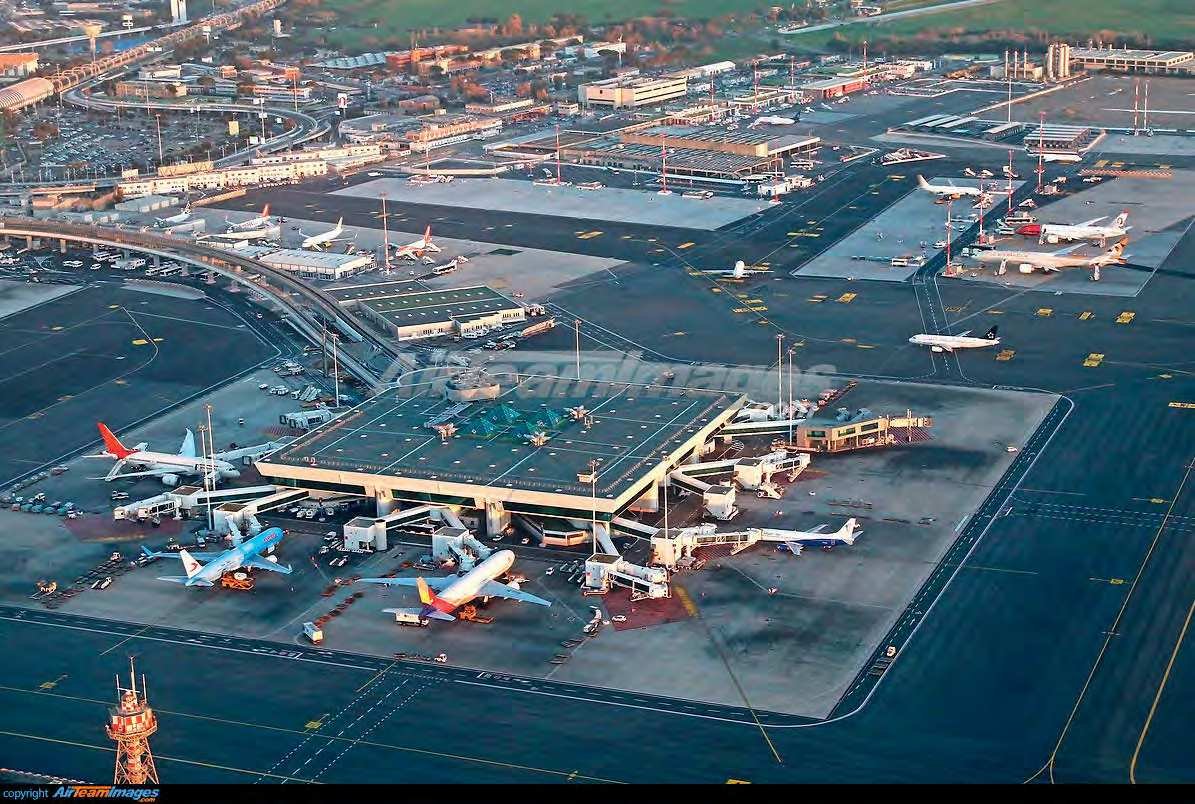 With 43.5 million passengers served in 2019 – the bulk of them tourists keen to see the Eternal City – Rome Fiumicino is one of Europe’s busiest airports
Air Team Images/Carlos Enamorado 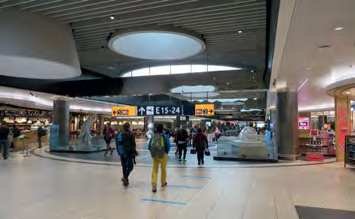 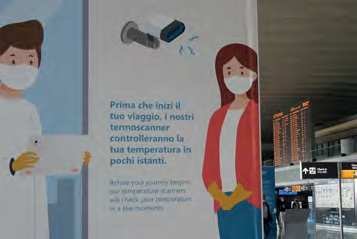 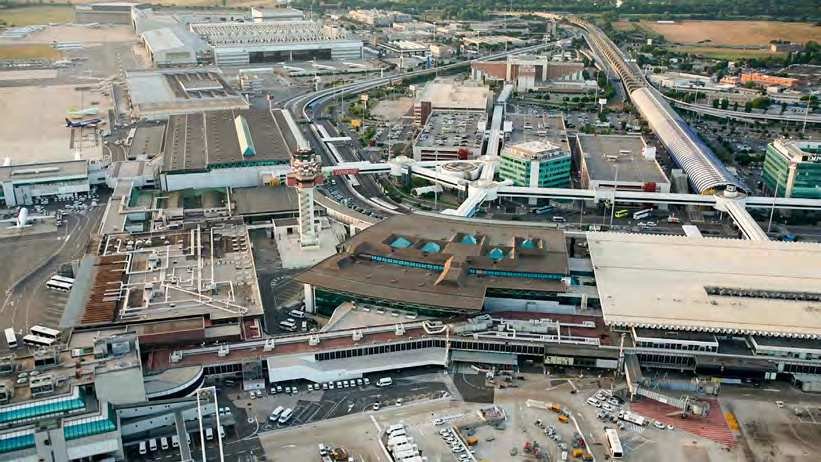 Ambitious expansion plans have been set to one side, with AdP instead deciding to focus on a modular build at FCO
AdP

Instead, future extensions will be undertaken to the east of Pier A. This, Littarru explained, “is preferable, because the new buildings will be built in an area already in use and occupied mainly by Alitalia’s hangars and maintenance facilities. It also enables a modular development of the terminal infrastructures, meaning that we’ll build only when we need to, according to demand, making it more cost-effective.”

AdR has a contract to manage Rome’s airports until 2046, with investments initially planned for €7bn, but now scaled down to around €5bn, Troncone told the newspaper Il Sole 24 Ore. The remaining investments include the development of a fourth runway.

Alitalia, which in 2019 accounted for around 30% of all traffic at FCO, will be a key player in the months to come. The airline recently exited a two-year phase of extraordinary administration and has a new president, Francesco Caio, a new CEO, Fabio Maria Lazzerini, and a new board, with €3bn of funding promised by the Italian government. “With our COVID-tested flights we sent a signal to the industry, but more importantly to our passengers. The response from customers was very positive,” Massimo Iraci, Alitalia’s chief strategy and operations officer, explained. Initially scheduled to terminate on October 16 at FCO and on October 23 at LIN, the COVID testing scheme was extended into November.

The rapidly growing number of COVID-19 cases recorded across Europe during the autumn had the potential to derail negotiations with the Italian government and EU on relaxing travel bans for COVID-tested flights. “We cannot give up. Without a vaccine, the only way to revive long-haul demand is by facilitating COVID-tested flights,” said Iraci. “But in order to approach governments and international institutions more profitably, airlines and airports in Europe must stop talking and start acting. This means standardising the type of tests and making them mandatory on certain flights, as we did on the Rome-Milan route. For our part, we aim to extend tested flights to our largest long-haul markets – New York and Tokyo – before summer 2021.”

In 2019, Fiumicino recorded its traffic peak: 43,532,573 passengers. Matching this will be a struggle, despite the airport seemingly having all it needs to be a favourite destination after the pandemic. Besides being one of the safest in terms of passenger health, it has been named Best European Airport by ACI for three consecutive years (2017-2019), was Skytrax’s World’s Most Improved Airport in 2018 and was awarded a four-star rating by the British agency in 2019.

What else could Fiumicino possibly need? Just passengers...

Alitalia, under new leadership, is key to Fiumicino’s future, accounting for 30% of all traffic at the airport in 2019