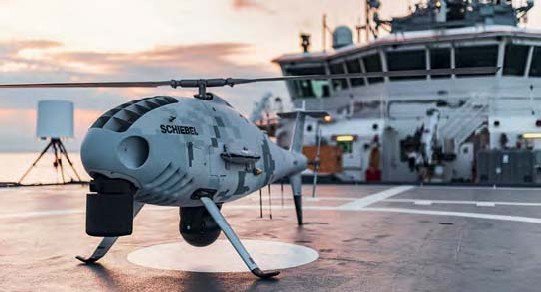 The Schiebel Camcopter S-100 was recently used in separate demonstration trials in the maritime environment in Scandinavia. The system participated in a simulated search and rescue (SAR) scenario with the Kystvakten (Norwegian Coast Guard) and in a maritime surveillance trial with the Rajavartiolaitos (Finnish Border Guard).

The Kystvakten trial, which took place over 11 days, saw an S-100 operate from the coastguard vessel KV Svalbard. In a simulated ‘man overboard’ scenario, the S-100 was tasked to find a dummy put into the water and transmit images in real time to the operational rooms aboard the KV Svalbard, a local land-based control centre and the Joint Rescue Center. A Luftforsvaret (Royal Norwegian Air Force) 330 Skvadron Sea King was then despatched to retrieve the dummy to the KV Svalbard.

In the Finnish trial, an S-100 performed a five-day surveillance demo aboard Offshore Patrol Vessel Turva in the Gulf of Finland in which it searched for, located and recognised objects as part of the Finnish Border Guard’s Valvonta2 (Surveillance2) project. Finnish Defence Forces, Finnish Customs, the Ministry of Agriculture and Forestry and Finnish Meteorological Institute representatives were also in attendance.