Crimea and Chernyakhovsk Air Base, Kaliningrad at Hmeimim Air Base, Syria. Russian Ministry of Defence

PLANNING FOR the launch of an offensive by the Syrian Arab Army to clear the Idlib province from the hands of anti-Assad opposition, jihadist groups and a regime desperate to claim it has won the war started in March. Assad’s objective operation could not be launched before the rebel held parts of Damascus and areas in the south of the country close to the Golan Heights had been cleared. Because of Assad’s limited air power, Russian Air Force support has been necessary in all of his operations to achieve his goals. Russia is a major player in Assad’s Idlib offensive. The Russian Air Force deployed eight Su-24M2s and eight Su-34s bombers, four Su- 35S interceptors and Russian Naval Aviation sent Su-30SMs and Su-33 fighters, all flying from Hmeimim Air Base, Latakia.

When Assad launched his offensive, the Russian Navy simultaneously held a large military exercise in the eastern Mediterranean between September 3 and 8 as a show of force and signalling to NATO not to disrupt the offensive in Idlib.

Russian naval presence Russian authorities are concerned about the possibility of a military response to the Idlib offensive by the United States and its allies, one similar to the previous cruise missile strike against Syrian chemical warfare facilities on April 14. To avoid a NATO response, Russian authorities ordered the largest post-cold war navy exercise in the Eastern Mediterranean Sea to go ahead. Russian forces in the area between September 1 and 9, included 24 ships, two submarines and 30 aircraft.

Russian Naval Aviation also took part, with seven Su-30SMs, four Su- 33s, two Il-38s and two Tu-142MK maritime patrol aircraft. Four of the Su-30SMs, bort numbers 41, 42, 47 and 48 Blue, belong to the 43rd Independent Maritime Assault Aviation Regiment (43rd OMShAP) based at Saki Air Base, Crimea; the regiment has 11 Su-30SMs on strength. The other three Su- 30SMs were bort numbers 71, 74 and 75 Blue, belonging to the 72nd Aviation Base at Chernyakhovsk, Kaliningrad; this unit has eight Su- 30SMs on strength.

A pair of Russian Naval Aviation Il-38s from the 7050th Aviation Base (the former 403rd Independent Mixed Aviation Regiment or 403rd OSAP) at Severomorsk-1 were deployed to Hmeimim before September 1 to be used for daily maritime patrol missions to observe ships underway in the Eastern Mediterranean assigned to the Standing NATO Maritime Group 2 (SNMG2), which was monitoring the Russian Navy exercise from its beginning. The SNMG2 comprised HMCS Ville de Quebec, HNLMS De Ruyter, ESPS Cristobal Colon and HS Elli.

A pair of Russian Naval Aviation Tu-142MKs were also deployed to Hmeimim from their home station at Yeysk on September 1.

To support the aircraft in Syria, the Russian Air Force also deployed four Il-78Ms to Hmeimim. The four tankers, 30 Blue (RF-94269), 32 Blue (RF-94270), 36 Blue (RF-94274) and 50 Blue (RF-95275), are assigned to the 3rd Aviation Squadron, 43rd Training Center at Ryazan Air Base. Every day of the exercise, the IL-78Ms were used to aerial-refuel the Su- 30SMs and Su-33s during combat air patrols of no-fly zones established by the Russian Navy while its ships were participating in the exercise.

Su-33s were not the only trade for the tankers; three Tu- 160 strategic bombers flew from Engels-2 Air Base to Syria on September 5, and returned back to Russia on round-robin missions. The Tu-160 crews had an objective. They reportedly simulated a cruise missile strike on RAF Akrotiri, Cyprus, the UK’s hub in the region, in a training event clearly designed to prepare its aircrew for a future confrontation with NATO. Interruption

Russia’s exercise started at 21:00Z (Coordinated Universal Time) on September 3, at which time the majority of the Russian armada, including Marshal Ustinov (055) a Slava-class guided missile cruiser armed with 64 S-300F (SA-N-6 Grumble) long-range and 40 OSA-M (SA-N-4 Gecko) shortrange surface-to-air missiles, was positioned to the south of Cyprus. The Marshal Ustinov and two frigates practised anti-ship and anti-submarine tactics while an Il-38, escorted by two Su-30SMs, provided maritime air support on the first night.

Based on NOTAMs (notices to airmen) released the day before, Russian forces established a nofly zone between sea level and 66,000ft to the south and southeast of RAF Akrotiri, unofficially blocking airspace to NATO aircraft arriving and departing the air base involved with Operation Shader.

The Russian Navy also established four other no-fly zones over its ships and submarines around the Eastern Mediterranean, which interrupted not only flights from or to Israel and Lebanon but also NATO flights involved in Operation Shader. At 16:30Z on September 3, a pair of RAF Tornado GR4s departed Akrotiri to join two Typhoon FGR4s and a Voyager KC3 over Iraq. While they were returning to Akrotiri at 22:00Z, the Tornado crews were forced to navigate around the no-fly zone, landing back at Akrotiri with a 15-minute delay. An RAF Hercules C4 also had to avoid the Russian no-fly zone with an associated delay when returning from Erbil International Airport.

Tu-142MKs and Il-38s mostly flying at low level were tasked with monitoring ships assigned to SNMG2, and provided warnings to keep their distance from the live-fire area for their own safety. The Russian patrol aircraft crews also launched sonobuoys and inert training torpedoes to practise detection of submarines and maritime strike. NATO’s SNMG2 also had the support of three types of maritime patrol aircraft: P-8A Poseidons from Patrol Squadron 10 (VP-10) ‘Red Lancers’ based at Naval Air Station Signonella, Sicily; a single Marineflieger P-3C Orion from Marinefliegergeschwader 3; and an Aéronautique Navale Atlantic 2 assigned to 21F, operating from bases in the Middle East. NATO tracking

As might be expected, Russian news websites claimed that the RAF RC-135 was intercepted by two Russian Naval Aviation Su-30SMs and forced to keep its distance from the no-fly zones.

Maritime patrol missions were flown each day throughout the exercise by US Navy P-8s operating from Sigonella. Objectives

The Russian government’s primary objective for staging the naval exercise was to deter NATO from staging some kind of airstrike against military bases in Syria similar to the one carried out by American, British and French forces on April 14. Russia’s part-blockade of airspace close to Akrotiri was meant to be symbolic and came at a time when no Royal Navy Type 45 destroyer was in the area.

Russian Air Force Su-24s and Su- 34s began bombing Hayat Tahrir al- Sham and Ahrara al-Sham positions in Hama and Idlib on September 4. Three days later, the presidents of Iran, Russia and Turkey met in Tehran to discuss Assad’s yet-to-be launched offensive and the likely humanitarian crisis involving displacement of 700,000 people to Turkey. A day after the summit, Assad’s forces launched an offensive to clear Idlib of those who oppose him. Needless to say the Russian Air Force provided the air support with an average of 20 daily bombing missions at the time this report was written. 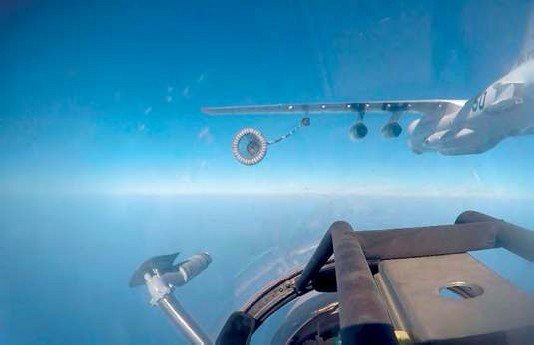 An Su-30SM seconds from plugging into the aerial refuelling drogue extended from the under wing pod of IL-78M 50 Blue, RF-95275 during a mission over the Eastern Mediterranean. Russian Ministry of Defence