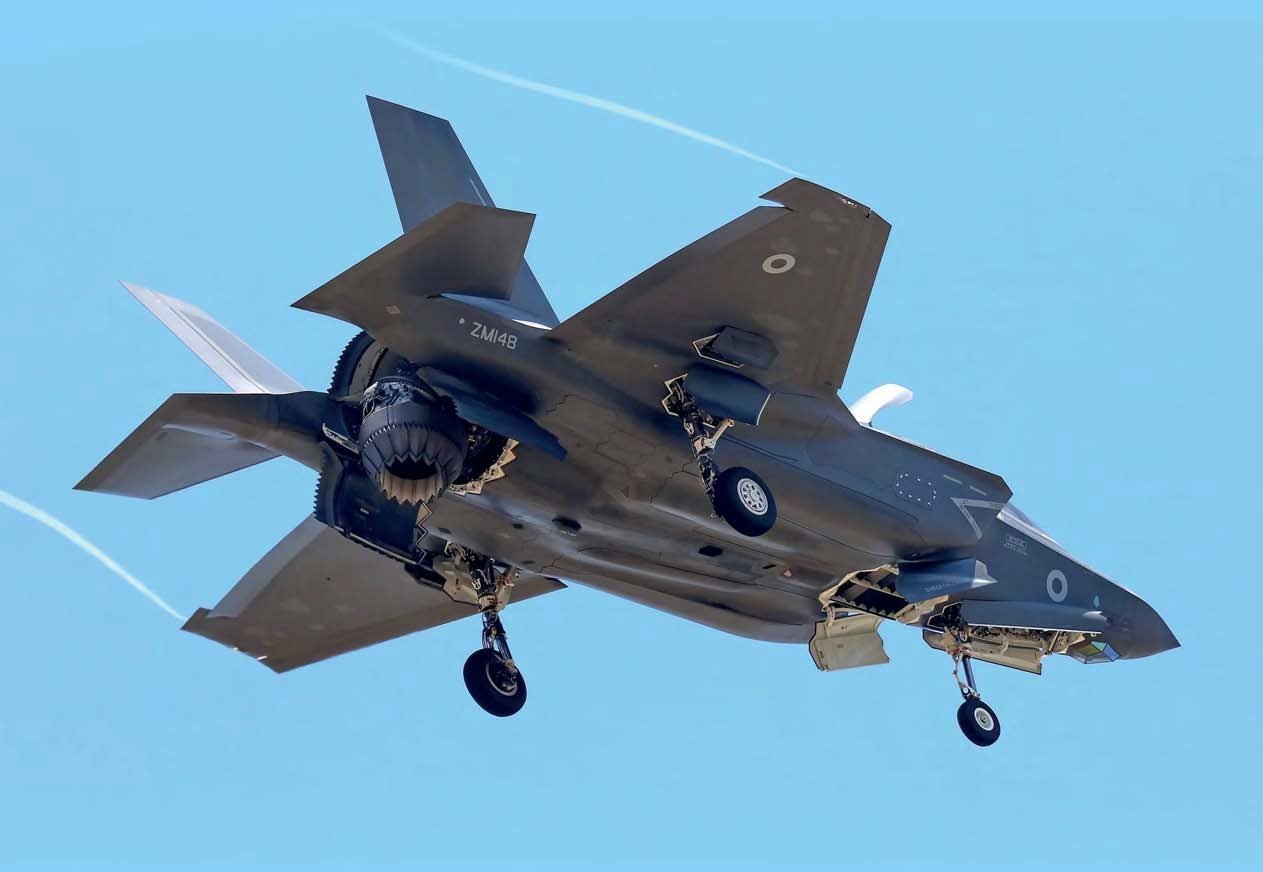 ALMOST THREE months after the Tornado GR4 retired from RAF service, its successor, the F-35B Lightning, carried out the type’s first mission against ISIS under Operation Shader.

F-35B Lightnings ZM143, ZM144, ZM145, ZM146, ZM147 and ZM148 arrived on the Mediterranean island on May 21 kicking off a sixweek deployment. Between May 27 and June 14, 14 617 Squadron pilots familiarised themselves with the Eastern Mediterranean area of operations, particularly the areas surrounding Akrotiri, flying 95 training missions and 225 flight hours (over 30% of the squadron’s total flying hours for 2018). Each pilot logged an average of six hours, while ground crews logged dozens of hours of maintenance time to keep a minimum four F-35Bs serviceable for the daily missions. As a part of local operating procedures’ training, the pilots familiarised themselves with command and control, fuel requirements, diversion instructions, jettison areas near to Akrotiti, VFR and IFR procedures and parameters, approved alternate missions, cross-country procedures, SAR and on-scene commander procedures, and local environmental flight ops restrictions such as winds, sea state, temperature and humidity.

Pilots practised VFR approaches (including low approaches) and landings, multiple touch-and-go landings in both conventional and STOVL modes, formation approaches and most importantly emergency landing procedures in the event of an engine flameout. Tactical landings using high angle-of-attack approaches to counter MANPAD threats around the airfield’s approach areas were also conducted. As part of their preparations for armed patrol missions under Operation Shader, pilots conducted air-to-air and airto- surface missions. Air combat training missions involved pairs of F-35Bs conducting various combat manoeuvers in 1 v 1 scenarios with simulated ASRAAM missile shots. Air-to-surface training was conducted from medium to high altitude involving target identification and simulated attacks against targets on the training range located near the base. Some air-to-surface missions were carried out jointly with the Royal Navy’s Type 45 air-defence destroyer HMS Duncan (D37), which was underway in the area tasked to protect RAF Akrotiri with its Sea Viper air defence system, comprising a 48-cell Sylver A50 vertical launching system for Aster 15 medium-range and Aster 30 long-range surface-to-air missiles.

Clearance to participate in Operation Shader was granted after the training period concluded on June 14. During the evening of June 15, two F-35Bs were selected for the first armed patrol mission conducted the following day. Each aircraft was fuelled and armed with pairs of ASRAAM and AIM-120C-5 AMRAAM air-to-air missiles and four Paveway IV precision-guided munitions. Both jets were fitted with Luneburg radar reflectors in order to illuminate the aircraft to air traffic control radars en route to Syria and Iraq, and to increase the aircraft’s radar cross-section data to Russian radar systems operating in Syria.

The two Lightning aircraft departed Akrotiri at 08:50hrs local time and were refuelled multiple times by a Voyager tanker during the armed patrol, before returning safely to the Cyprus base during the late afternoon. The 12 other F-35B pilots all logged a near six-hour flight in support of Shader through to June 25. It is not known how many of these missions were flown at night. While were airborne over Syria, the F-35Bs had their APG-81 AESA radars switched off, and despite being armed with ASRAAM and AMRAAM, a pair of Typhoon FGR4s held responsibility for escorting and protecting the Lightning fighters. Each Typhoon FGR4 was armed with a pair of ASRAAMs, a single AIM-120C-5 AMRAAM, two Paveway IVs and two Brimstone missiles. On June 24, the UK’s then Defence Secretary, Penny Mordaunt, visited Akrotiri to witness F-35B operations. Speaking from the base, Penny Mordaunt said: “The first UK F-35B operational sorties were flown on Sunday June 16 in support of Operation Shader, the UK contribution to the Global Coalition’s counter Daesh mission in Iraq and Syria. The two aircraft conducted a patrol over Syria, and UK F-35s have flown a further 12 sorties since then.” Mordaunt served as Defence Secretary for just 85 days before being sacked by the UK’s new Prime Minister Boris Johnson.

Chief of the Air Staff, Air Chief Marshal Sir Stephen Hillier said: “This first operational mission for the UK’s F-35 Lightning confirms the impressive progress which we have made in introducing this formidable new capability into service. It is testament to the outstanding abilities of our dedicated and highly trained air and ground crew that 617 Squadron has achieved this important milestone so quickly and so effectively.”

After participation in the Operation Shader, two F-35B pilots participated in an exercise over the Eastern Mediterranean Sea on June 25, dubbed Tri Lightning. This one-day defensive counter air exercise involved Blue and Red (adversary) aircraft from three nations, and consisted of active and passive air defence operations to demonstrate interoperability between UK, Israeli and American F-35s. Pilots flying in Tri Lightning all had combat experience: the American pilots during Operation Inherent Resolve; the British pilots in Operation Shader; and the Israeli pilots during airstrikes against Iranian Islamic Revolutionary Guard Corps and Hezbollah targets in Syria. Two US Air Force F-35As operated by the 4th Expeditionary Fighter Squadron flew from Al Dhafra Air Base in the United Arab Emirates, two UK F-35Bs from RAF Akrotiri and two Heyl Ha’Avir F-35Is assigned to 140 ‘The Golden Eagle Squadron’ based at Nevatim Air Base participated in the exercise. Due to the distances involved, the US Air Force F-35As were air refuelled by a KC-10A flying from Al-Udeid AB, Qatar. Between 08:00 and 09:00hrs local time, all six F-35s formed a six-ship formation to the south of Akrotiri for a photo opportunity with US Air Force photographers onboard the KC-10A. Officer Commanding 617 Squadron Wg Cdr John Butcher said: “Tri-Lightning had been planned for months, and provided an outstanding opportunity for the squadron to operate and learn from our fellow F-35 community. In addition, it allowed us to share and gain valuable experience that we can exploit during future training and potentially operational deployments, whether embedded on HMS Queen Elizabeth or from overseas air bases.” Head of the Heyl Ha’Avir, Brigadier General Amnon Ein-Dar said: “This is the first international exercise for the F-35[I]s, an exercise that reflects the close cooperation between the forces [Heyl Ha’Avir, US Air Force, RAF]. International cooperation between Israel, the United States and Britain reinforces common interests and new capabilities, and exclusively in the Middle East.”

Six days after Tri-Lightning, all six UK F-35Bs redeployed to RAF Marham. However, two aircraft – ZM146 and ZM148 – flew to Amendola Air Base, Italy, home of the Aeronautica Militaire’s 32° Stormo ‘Armando Boetto’ (32nd Wing): not a diversion, but to participate in another joint exercise, this time between the Aeronautica Militaire and US Air Force F-35As assigned to the 421st Expeditionary Fighter Squadron on deployment to Spangdahlem Air Base, Germany. In addition to Amendola-based 13° Gruppo F-35As, other Italian aircraft involved were T-346A trainers, AMX light attack aircraft, Eurofighter F-2000A Typhoon fighters and KC-767A tankers. Highlighting the importance of the exercise, Commander of 32° Stormo, Colonel Marzinotto said: “It is an important opportunity to enhance interoperability between the three countries involved: the interaction between air forces using the same fifth-generation aircraft allows us to share training and operational experiences that guarantee exceptional added value to consolidate and unite relationships in NATO.” Having proved the F-35B on operational sorties over Syria, 617 Squadron used the Italian exercise to develop further the unit’s ability to operate effectively at range from the UK and from an allied air base, in this case Amendola. 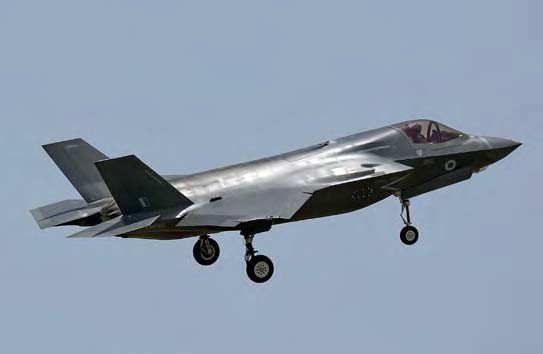 F-35B Lightning ZM146 on final approach for landing at Akrotiri in conventional mode. 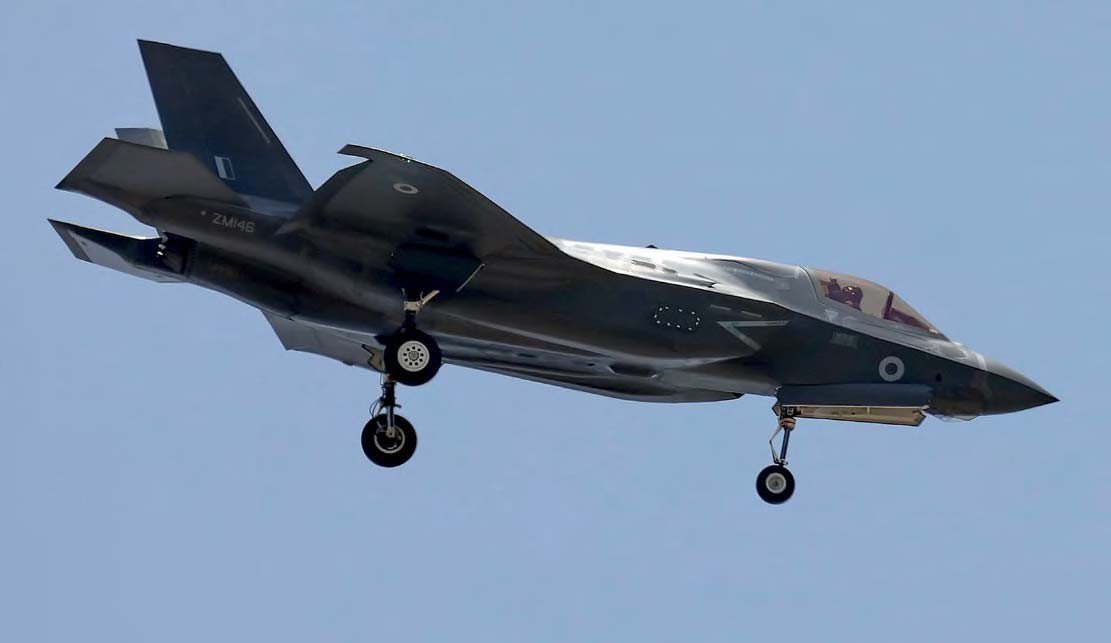 F-35B Lightning ZM146 during a simulated emergency landing replicating a scenario in which the F135 engine had suffered a flame out. The aircraft is shown landing with a high angle of attack after circling several times from an altitude of 20,000 feet.