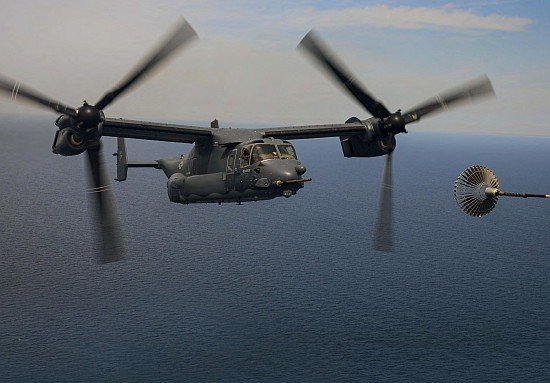 A CV-22 Osprey approaches a drogue on the end of the hose extended from a MC-130H Combat Talon II during a training mission.
Senior Airman Christopher Callaway/US Air Force

The 8th SOS operates the CV-22 Osprey, the version of the famous tilt-rotor aircraft designed for special operations. The mission of this machine, which mainly replaced the MH-53, is long-range infiltration and exfiltration of troops and materials, usually at night. The CV-22 can land on simple spots as a helicopter, but can also deliver personnel by airdrops or fast-rope.

The CV-22’s origins date back to Operation Eagle Claw in April 1980, the failed US Special Forces mission to rescue American hostages from the US Embassy in Tehran involving US Air Force EC-130Es and MC- 130E Combat Talons and US Navy RH-53D Sea Stallion helicopters.

The mission’s failure led to the Joint-service Vertical take-off/landing Experimental (JVX) programme, whose contract was assigned in 1983 to Bell- Boeing. The first of 51 CV-22s for the US Air Force entered service with the 58th SOW at Kirtland Air Force Base, New Mexico in March 2006, and the type was officially accepted at Hurlburt Field the following November. The 8th SOS was the first front-line squadron to be declared operational, reaching its IOC in March 2009. Today, the 8th SOS operates 14 Ospreys. The CV-22 is still in production and deliveries are expected to be completed by 2019.

Captain Jon Lohse, a CV-22 pilot, told AIR International: “The famous rescue mission of hostages in the US Embassy in Tehran in 1980 took about 36 hours. Today, with the Osprey, it would need only one night and eight hours. The Osprey fiies twice the speed of a helicopter and has twice its endurance, and can fly at higher altitude.”

The Osprey is a necessary complement to the 1st SOW’s MC-130H Combat Talon II, as it can take off and land in small areas, like a helicopter can. A CV-22 can also perform automatic approaches and, thanks to its hoist, conduct rescue operations.

Pilots assigned to the Osprey come from helicopter or C-130 fleets. The initial qualification training is carried out with Marine Medium Tiltrotor Training Squadron 204 (VMMT-204), the US Marine Corps’ Osprey training unit based at Marine Corps Air Station New River, North Carolina. The course is about four months long and includes 50–60 missions in the simulator, and 25–30 flying hours, covering basic flight operations.

Further training is carried out at the 58th SOW, where new pilots learn how to employ the CV-22 in an operational environment, mostly at night. The course at Kirtland is six to nine months long (depending on the training opportunities) after which pilots are assigned to an operational squadron.

A new pilot arrives at Hurlburt qualified as a Mission Pilot, but still has a lot to learn. Operational training includes a deck landing qualification, free fall personnel airdrops and night hoists at sea. It’s easy to understand the difficulties Osprey pilots have to face – for example, they must learn and qualify to carry out in-flight refuelling at an altitude of 500ft and 115kts (213km/h) – at night! This phase of their operational training lasts about another nine months and must be achieved before a pilot can be assigned to their first operational deployment. 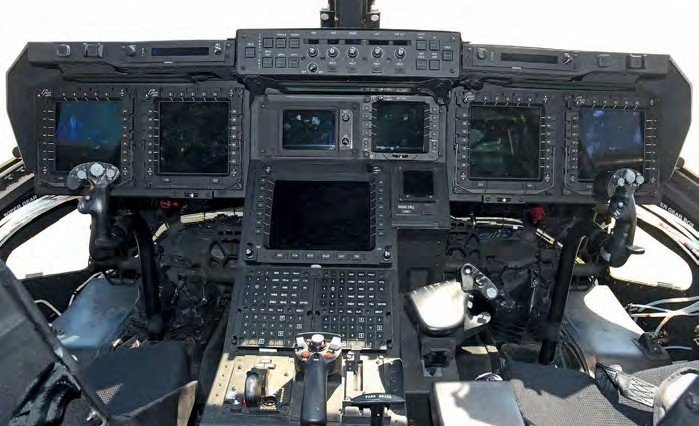 1 The cockpit of the CV-22 Osprey is dominated by five colour multifunction displays.

The CV-22 includes a series of modifications necessary to perform Special Forces operations. It boasts extra wing fuel tanks, which increase the fuel capacity by 588 US gallons (2,230 litres). In addition, the cargo cabin can accommodate up to three auxiliary tanks of 200 or 430 US gallons (757 or 1,627 litres) capacity.

The CV-22 is equipped with a glass cockpit featuring four large multifunction displays and one central display unit. A cockpit management system fully couples autopilot functions, including an automatic mode to switch from forward flight to 50ft (15m) hover, with no pilot intervention. This, coupled with a head-down display and hover symbology helps to overcome brown-out situations.

A CV-22 crew comprises two pilots and two flight engineers. One engineer has a crew station located just behind the flightdeck, managing navigation and aircraft systems, the other is in the cargo area as a loadmaster and gunner. The two can change position on-board; they have the same qualifications. During a sortie, the aircraft commander manages the mission and communications, while the second pilot acts only as pilot. The cargo cabin can accommodate 24 troops seated or 32 troops on the floor, or 10,000lb (4,540kg) of cargo.

The CV-22 has a collapsible mount fitted on the aft ramp for either a M240 0.3-inch (7.62mm) or M2 0.5-inch (12.7mm) machine gun. Trials have been conducted for fitting a forward-firing weapon. However, this would introduce more weight and could affect the general performance of the aircraft.

Initially, the CV-22 was deployed without armour floor panels, but these were introduced after December 2013, when three aircraft deployed in South Sudan suffered heavy damage during a rescue mission flown to evacuate American civilians. Operations are classified, but Air Force Special Operations Command CV-22s are used for missions in Africa and the Middle East against IS forces.

Capt Lohse said: “The CV-22 receives regular upgrades, especially avionics and software; other recent improvements include a new fuel dump system and a new head-up display used in conjunction with night vision goggles [NVGs]. There is also a new colour helmet-mounted display in two versions, one for the use of NVGs and the other for daylight operations, but at present, only the first has been assigned.”

Maintenance is performed by personnel from the squadron and the wing, supported by Bell- Boeing field service contractors, necessary when some complex or new technical problems appear. They also check the data feedbacks downloaded from the aircraft after every flight. 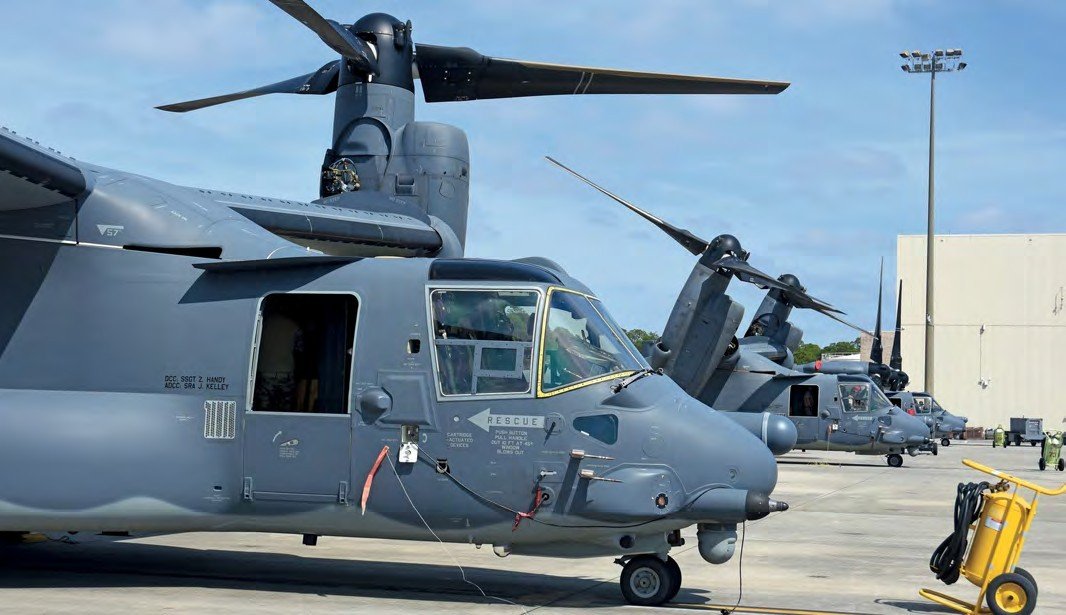 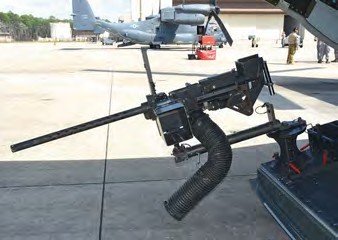 3 The only weapon currently employed by the CV-22 Osprey, an M2 0.5-inch machine gun mounted on the rear ramp.

The Osprey requires a lot of extra maintenance compared to other aircraft due to the number of systems and new technologies used on the aircraft. For example, the rotor washplates must be changed every 420 hours. Major inspections are scheduled every 210 flying hours (A phase); 420 hours (B phase); 630 hours (C phase) and 860 hours (D phase).

Thanks to feedback from operational use, in the future the A phase will probably be increased to 350 hours. Depot-level overhaul is scheduled to take place at every second D phase inspections (1,720 hours), and is performed at Hurlburt, where the other AFSOC Osprey units also send their aircraft for depot maintenance. The oldest CV-22 had logged 2,500 hours by March 2017. According to Capt Lohse: “Reliability is improving a lot, thanks to the efforts of the industries involved.”

AFSOC first deployed the CV-22 Osprey in November 2008 for Exercise Flintlock in Mali, flying non-stop from Hurlburt to Africa, thanks to in-flight refuelling. In August 2009, the 8th SOS was deployed for the first time in Iraq. Since then, the squadron has also served in the Horn of Africa, Afghanistan and the Middle East.

Two other squadrons are part of the 1st SOW: the 34th and 319th SOS, both fly the U-28A, the US Air Force version of the Pilatus PC-12 turboprop utility aircraft. The 319th SOS was formed in October 2005 just to operate the type, initially receiving six aircraft. In April 2010 it was followed by the 34th SOS, with a similar number of aircraft. Today, 28 U-28As are in service, with the type also assigned to the 318th SOS at Cannon Air Force Base, New Mexico.

The U-28A was purchased with funds from Special Operations Command (not the US Air Force) for Operations Enduring Freedom and Iraqi Freedom. As appears from its designation, the U-28A is mainly a utility aircraft, able to carry nine people (plus three or four crew) and cargo, and fly from short and unpaved strips. The U-28 is fitted with military communication equipment (including datalink, video, data and voice), aircraft survivability and advanced navigation systems. Some U-28s also have electro-optical sensors installed for intelligence, surveillance and reconnaissance missions.

Not much is known about missions assigned to the U-28 fleet, though they usually support operations in Africa and the Middle East. Part of the fleet received a military camouflage colour scheme, but other examples operate in civilian style liveries. 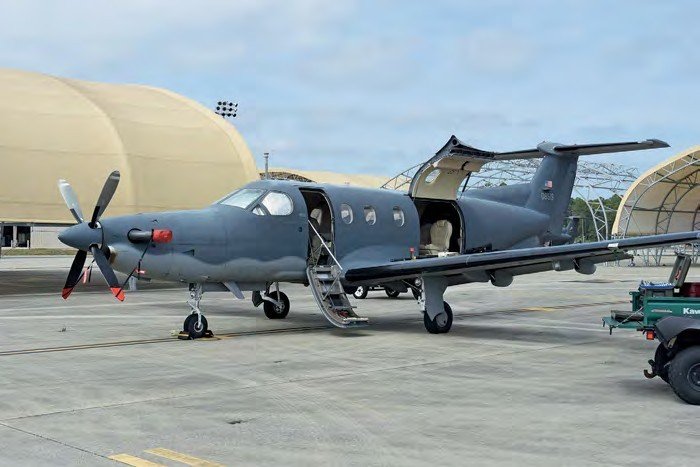 4 Two squadrons operate the U-28A, for utility and ISR missions.
All photos Riccardo Niccoli unless stated