At 08:30hrs, the ambient air temperature at Bardufoss Air Station in northern Norway is -10ºC (14ºF). The first of two Wildcat AH1s and a Merlin HC3A assigned to 847 and 845 Naval Air Squadrons crank up their engines for the first mission of the day. Conditions are austere. Faced with such conditions, it remains imperative that procedures between air and ground crew are coordinated precisely because of the extreme cold. While attention is focused on the aircraft’s safety and performance, spare a thought for the engineers and technicians whose duty it is to maintain aircraft serviceability in such harsh conditions. AIR International spoke with senior engineering personnel during Clockwork 2019 as they tested themselves in Arctic conditions.

Each winter, aircraft and personnel from the UK’s Joint Helicopter Command (JHC) deploy to Bardufoss, which is located approximately 200 miles (320km) inside the Arctic Circle. Why? To complete cold weather survival and rotary environmental qualification (EQ) training. Norway’s unforgiving conditions with low temperatures, snow, ice and high winds, provide a supreme test of an engineer’s ability to maintain aircraft serviceability. Deployed between January and mid-March, personnel were blessed with just one hour of daylight at the beginning of their time in the far north. Reduced daylight hours have a profound effect, making crews feel more tired than normal. One commented: “You have more spring in your step when the daylight hours increase - which is good for an engineer!”

From an engineering perspective, determining what Wildcat’s footprint is, what its physical information technology requirements are, and what the deployable spares pack requirements are to operate effectively in the field, is critical. Preparation for this latest test of Wildcat’s cold weather capabilities commenced weeks before the aircraft were deployed as Lieutenant Stewart Dadds, 847 NAS Clockwork detachment engineering officer, explained: “The main transit process was to prepare the aircraft at Yeovilton and then clear the maintenance schedule to ensure no major component changes were due whilst we were deployed. We then flew the aircraft to RAF Brize Norton (the detachment deployed using two C-17A Globemaster IIIs), removed the main rotor blades and the tail plane and then, to enable the aircraft to operate in the deep snow, raised the nose wheel oleo. These contain a fixed pressure and nitrogen charge to ensure the aircraft sits at a fixed height and only marginal pressure changes needed to be made. We initially deployed with two aircraft with two more arriving two weeks later. Aircraft were made available quickly to enable our initial aircrew to familiarise themselves with the environment before standing the aircraft up to enable aircrew to commence their environmental qualifications. This process will be reversed for the journey home.”

Driving snow, freezing temperatures and darkness. Bardufoss has the worst of weather conditions to endure.

The extreme weather places constant pressure on air and ground crew alike. With four Wildcats able to fit inside one Rubb hangar, 847 NAS engineers were able to complete their maintenance inside. Air temperatures outside fell to -30ºC (-22ºF) which is below Wildcat’s theoretical operating level limit of -26ºC (-15ºF). The temperature inside the hangar is maintained at around 15ºC (60ºF), but the temperature plummets the moment the hangar doors are opened. When possible, aircrew completed their pre-flight checks inside as Lieutenant Dadds explained: “It is imperative we do this in these conditions before we drag them [the helicopters] outside. It is a very dry atmosphere with no moisture. It is much easier working when it’s cold and dry, as the snow can be just brushed away, rather than the recent conditions when the ambient temperature outside was around 5ºC (41ºF) which created snow melt and more moisture. With the extreme cold, our personnel work inside the hangar generally and when the aircraft is required on the line, it is spotted quickly allowing the aircrew to walk and start the aircraft after completing their walk-around. It’s the same when they return. The aim is to limit snow build up. The aircraft can be moved from the hangar to the line in approximately 15 minutes which is the ideal time; communication between the air and ground crew is vital. We do this to ensure the aircraft isn’t just outside doing nothing. Before this, our personnel will clear the snow using shovels, if required, to mark the aircraft’s position. Freezing rain on the hard-standing areas is a problem which we try to eliminate by using metal grids which the aircraft sit on. These increase the aircraft’s footprint and prevent it slipping in high winds. They are counted and removed each time to ensure they’re all returned and not ingested by a snow plough. This attention to detail is important. The team drags the aircraft out to the spot using a tractor martialled by a supervisor and the chock ratings. It’s basically safety in numbers to ensure the aircraft doesn’t slip during the move.” 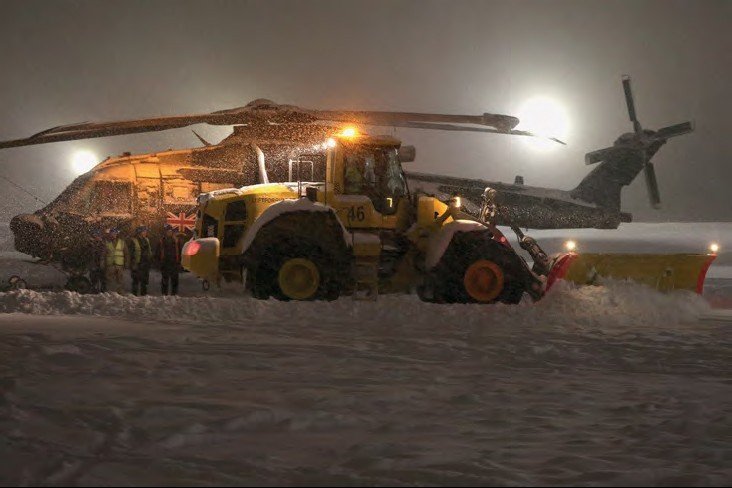 Digging out a Merlin, and towing it back to the hangar.

The distance of the aircraft operating spots from the maintenance hangars varies but the closest is approximately 109ft (100m) away. The time taken to reach the designated spots varied depending on whether it was snowing and how hard. Once operational, aircraft often repositioned from their designated spots to refuel from a forward arming and refuelling point (FARP) manned by the United Kingdom’s Tactical Support Wing and located at the far end of the operational apron. 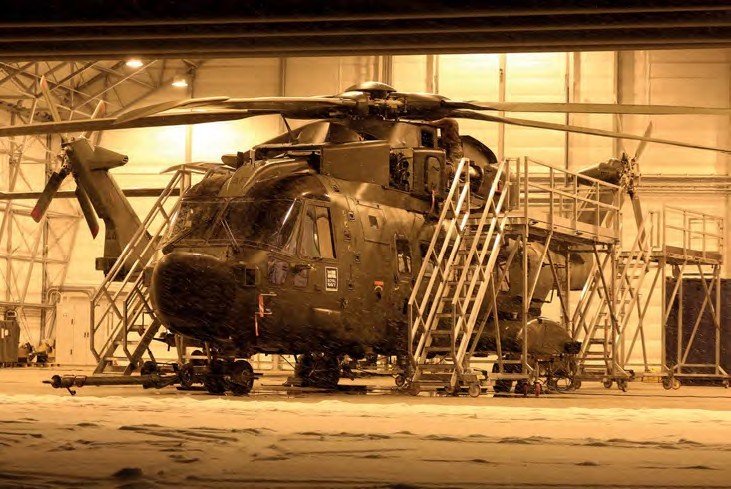 The Bardufoss hangar provides shelter from the snow and illumination, but little difference in temperature.

Three Merlin HC3As from 845 NAS selfdeployed from Yeovilton flying the 1,533 miles (2,467km) to Bardufoss with overnight refuelling stops en route in the Netherlands, Denmark and Norway. Prior to departure, engineers re-roled the aircraft’s rotor ice protection system (RIPS) which is an electrothermal de-icing device which manages main and tail rotor blade heating based on the liquid water content and outside air temperature; they also increased wheel oleo and tyre pressures to enable the Merlins to operate in the snow. They were greeted at Bardufoss by 53 engineers who were led for the five-week deployment by Chief Petty Officer (CPO) Steven Harteveldt; 845 NAS B Flight Senior Maintenance Rating. CPO Harteveldt’s was as a structural engineer with 1710 NAS, working on Harriers and various naval Westland Sea King variants. 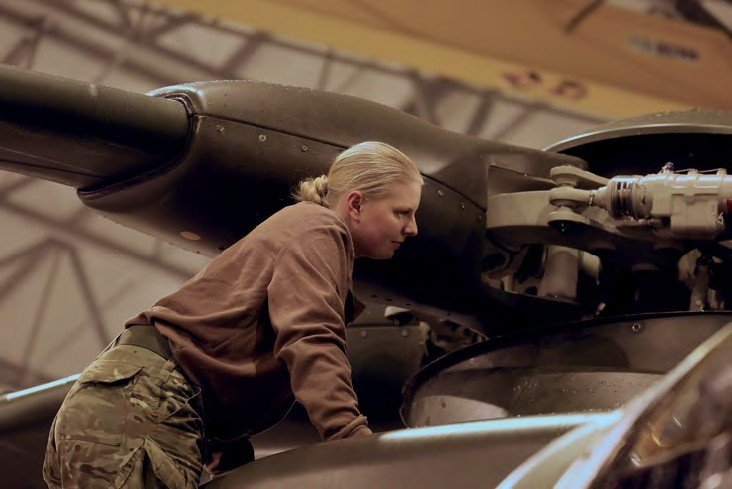 Watching over a colleague while performing engine maintenance.

In a similar fashion to aircrew, CPO Harteveldt confirmed that engineers complete a form of environmental qualification known as a targeted educational module, which qualifies them to operate and maintain helicopters during Clockwork. This effectively covers the environmental and safety aspects of their working procedures such as covering aircraft (protecting aircraft from the elements – one Merlin was generally left covered on the line) and working on movable platforms. These tended to be used inside the Rubb hangars for safety reasons. Inside hangars, aircraft are positioned in a manner which allows the blades to be spun if necessary, with the platform providing a safety line. Historically, high platform work was undertaken on the line, but this no longer happens because of environmental considerations which include metal fatigue and stress from dragging this staging on to the line. 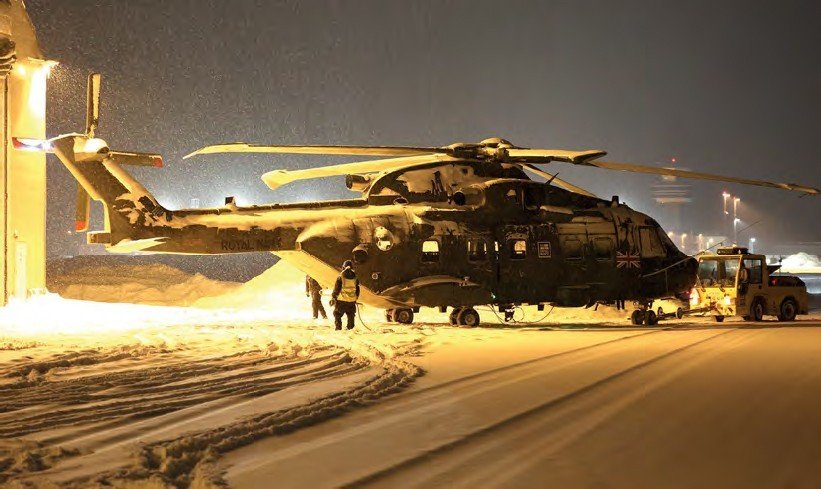 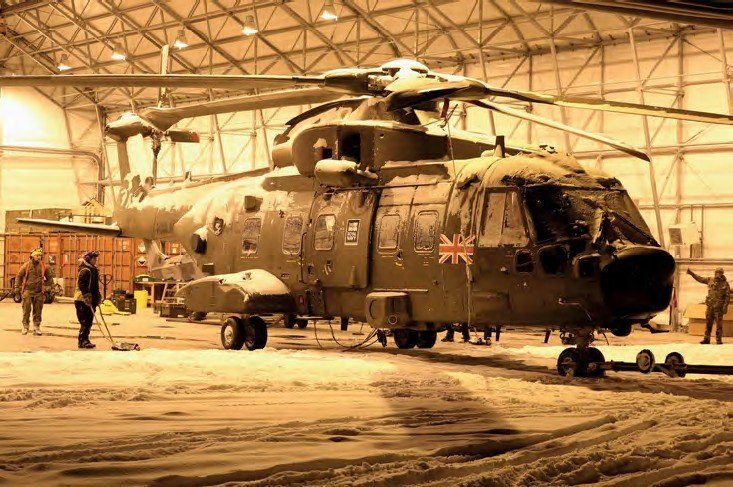 Environmental issues are considered at all times as CPO Harteveldt explained: “The rotation of manpower is critical here. We operate a ‘24 about’ watch routine which means, over two days, our engineers work 24 hours on and have the rest of the time off. During this time, they get eight-hour sleep/rest periods; one day on watch in the morning and the remainder of the day off. Next day, in for the afternoon and off during the night. Watch routines will be adapted depending on aircraft serviceability but always staying within policy boundaries. We will stand people down and bring a later watch in to ensure we maintain maintenance and resolve any aircraft issues. We are extremely wary of cold weather injuries given the survival training we complete on the cold weather survival course. All our engineers are cold weather trained and acutely aware of the dangers. They all have the option to stop if it becomes too cold. It is tough but ultimately this helps prepare us for [Exercise] Cold Response 2020.”

Aircraft are serviced ahead of each mission inside the hangar and then dragged to the line and spotted as close to the departure time as possible due to the environmental factors. A tractor is always available to enable line-operators to move inside if necessary. Engineers are actively encouraged to go inside and have hot drinks (known as wets) when temperatures fall as CPO Harteveldt explained: “As the aircraft is prepared, the Watch Chief and line supervisors ensure everyone is dressed correctly and will look to rotate personnel every 20 minutes or so if conditions degrade. It can get as low as -60ºC [-76ºF] beneath a Merlin’s downwash.

Aircraft batteries don’t like the cold either. No more than 30 minutes outside idle otherwise we have to start removing batteries, breaking into systems to maintain serviceability. We aim to get the GPU [ground power unit] running quickly to warm the aircraft up ready for the aircrew. This generally irons out any electronic issues which can occur in this environment. We generally use this rather than the aircraft’s APU [auxiliary power unit] as the aircrew are restricted to two APU starts below -18ºC [0.4ºF]. Once the APU is running, aircrew have all the power they need as long as they don’t apply the aircraft’s anti-icing which draws a lot of power. Merlin has an excellent de-icing and blade anti-icing system which is unique amongst the UK’s support helicopter force.”

”With the extreme cold, our personnel work inside the hangar generally and when the aircraft is required on the line, it is spotted quickly allowing the aircrew to walk and start the aircraft after completing their walk-around.” 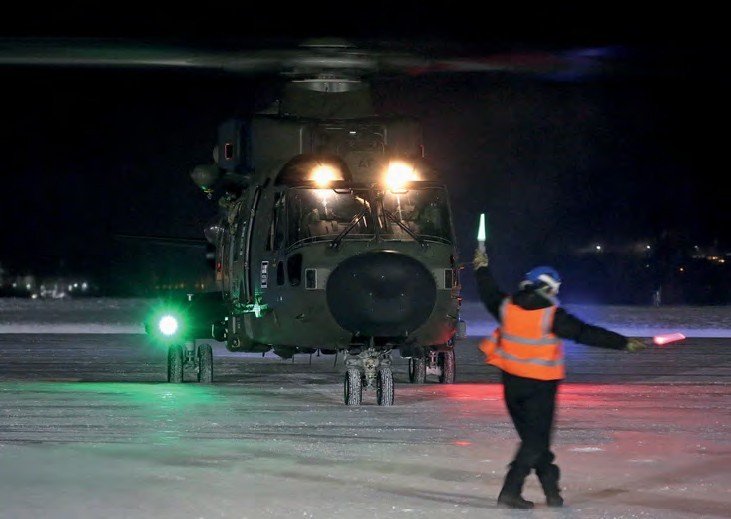 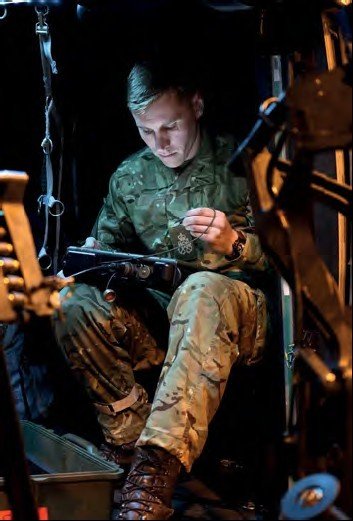 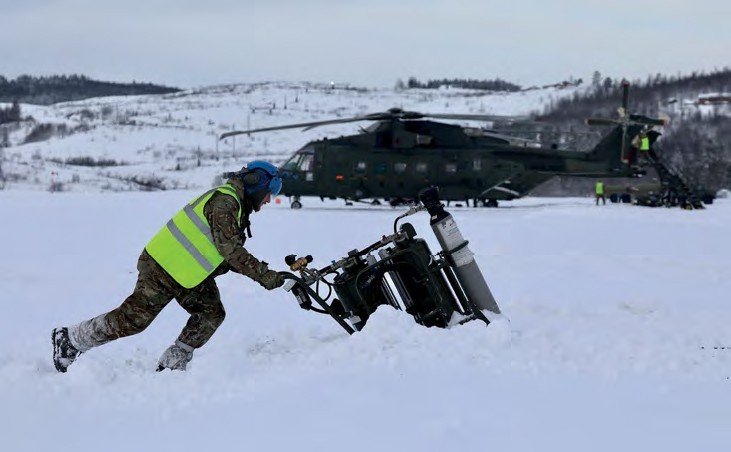 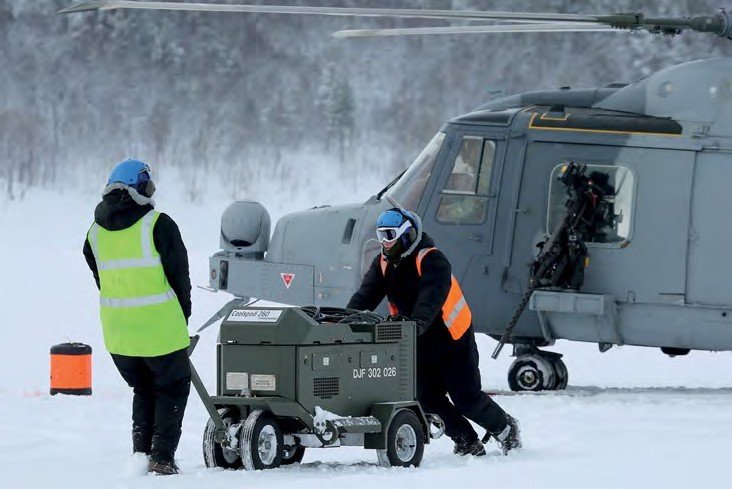 Moving a generator on the flight line makes for tough work at -15°C.

The engine intakes, windscreen and pitot tubes on Merlin are anti-iced and heated to prevent ice build-up. The blades also have heater mats positioned along their length which are powered in a certain sequence to warm them, removing any ice which builds on the ground. CPO Harper also confirmed that aircrew tended to fly Merlin ‘wheelsdown’ in Norway to mitigate against landing system over-use and ice build-up following snow landings. CPO Harteveldt said: “The snow can become compact around the mechanism, trapping the gear making it diffcult to release. We just safeguard against that potential within CHF”.

This towing tug looks powerful but does not look geared for such snowy conditions.

The challenge for 845 NAS was made harder during Clockwork 2019 when all three serviceable aircraft were grounded for three days as a precaution when a small crack in the tail-rotor paint was discovered during routine Merlin maintenance at Yeovilton. Safety checks completed, aircraft were soon running again in all conditions. Like 845 NAS, 847 NAS has travelled a huge distance in a relatively short period of time with Wildcat, which has been tested in both hot and cold climates during the past five years. The good news for Leonardo Helicopters is that 847 NAS engineers confirmed they encountered no major component issues despite the severe weather in Norway. Clockwork 2019 certainly pushed personnel to their limits in conditions which were often brutal. The engineers deserve huge credit as all flying objectives were achieved. It was a team effort. AI 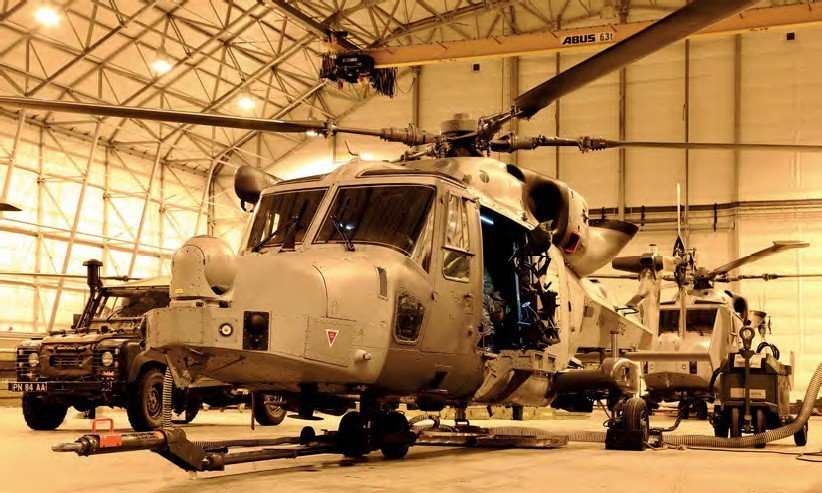 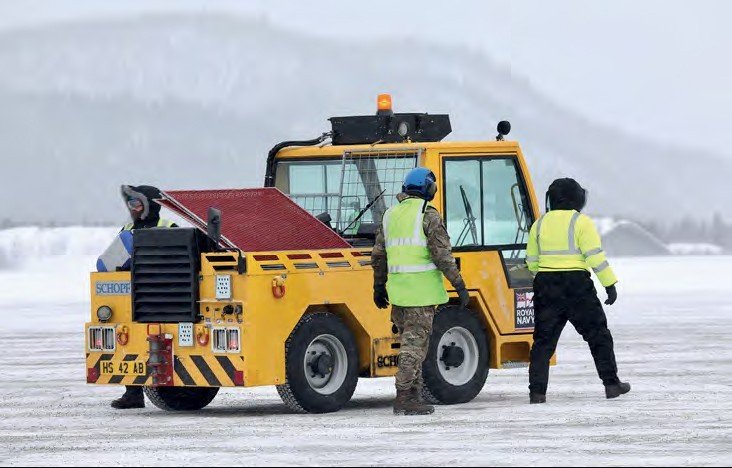 Bags get in the cab! 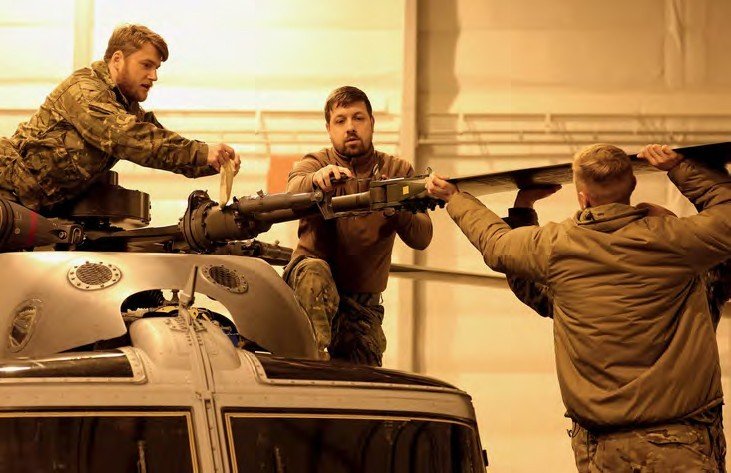 Taking some punishment, Sailors and Royal Marines work on a rotor blade with their bare hands.